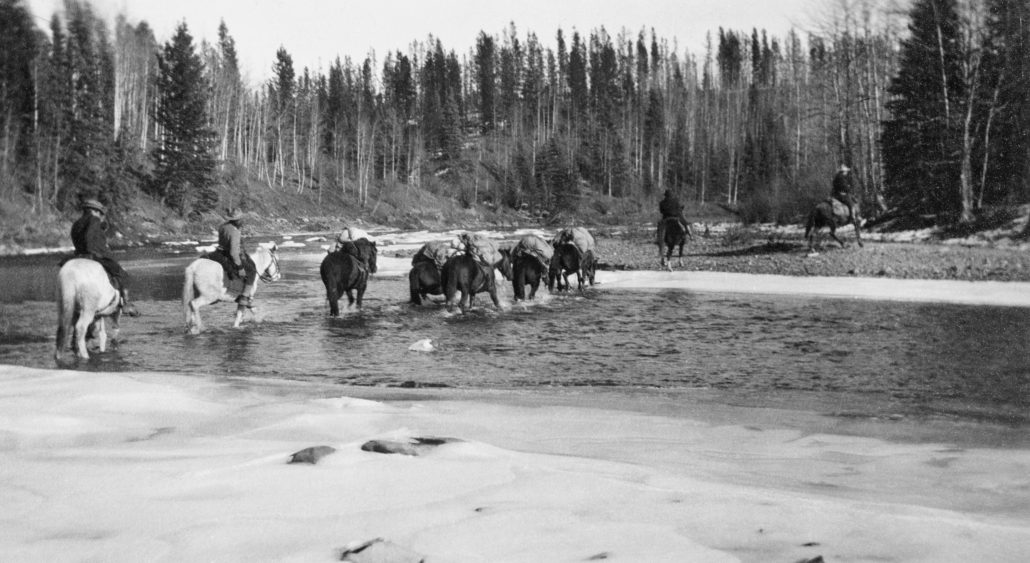 I ended my last York Factory Express journal with John Charles’ journey from Jasper’s House to Fort Assiniboine, on the Athabasca River, in 1849. He had a long and difficult journey downriver, and now he (like all the others before him) must cross the Assiniboine Portage on horseback, to Edmonton House on the North Saskatchewan River.

This 80-mile horse journey south to Edmonton House might have been the shortest leg of their outgoing journey to York Factory, but it was by no means the easiest. For once there were no mountains to cross; but the trail led through a morass of swamps, bogs, burnt trees, and deep streams. Another of the many difficulties these men experienced was the poor condition of the horses that overwintered at Fort Assiniboine.

I don’t know if you have noticed that these men are travelling over three major river systems. They came from territories that were served by the massive Columbia and Fraser’s Rivers, that followed two different courses west to the Pacific from the western edge of the Athabasca Glacier, part of the Columbia Icefields. On the eastern edge of the same glacier they dropped their boats into the waters of the Athabasca River — a river that would flow east and north through Great Slave Lake and north again to the Arctic Ocean. When they reached Edmonton House they touched on a third river system — the North Saskatchewan River that flowed east from the foot of the Saskatchewan Glacier (part of the Columbia Icefields) all the way to Lake Winnipeg and east again via the Nelson River to Hudson Bay and the Atlantic Ocean. Only two Canadian river systems remained untouched by these fur traders, and those who left the express to return to Montreal would travel one of them — the Winnipeg River to Rainy Lake and Fort William; Lake Superior to Lake Huron via Sault Ste Marie; the French River to the Nippissing to the Mattawa to the Ottawa and, eventually, Lachine, just east of Montreal.  However the last river remained entirely untouched, by these fur traders at least. That river was the Milk, in the southern portion of today’s Alberta and Saskatchewan; it flowed south with the Missouri into the Gulf of Mexico.

In 1848, a young Scotsman named Thomas Lowe led out the York Factory express. Born in Perthshire, Scotland, Thomas Lowe entered the fur trade of the Hudson’s Bay Company in 1841 as an apprentice clerk, and served his first year at Fort Taku, on the west coast — a post that was embroiled in conflict with the local natives from the beginning. When Taku was closed down, he and others came south to the new post at Fort Victoria, where they helped in its construction. Lowe then returned to Fort Vancouver and spent most of his time serving at that important post. He took out the York Factory Express in 1847, and again in 1848. In 1849 he married one of James Birnie’s daughters, and retired from the fur trade to become a merchant in Oregon City and San Francisco. Thomas Lowe is important for the journals and records he kept — not only of the York Factory express journeys, but of life at Fort Vancouver during a very important time in the fort’s history.

In this segment of the York Factory Express journals, we will follow twenty-three year old Thomas Lowe, as he leads his express party south from Fort Assiniboine, on the Athabasca River, to Edmonton House in 1848.

“14 [May], Sunday. Started from Assiniboine this morning at 9 am with 14 loaded horses and 8 saddle horses. Just as we started Mr. [George] McDougall arrived with his two boats from Lesser Slave Lake, and will follow us tomorrow. The horses are in a most wretched condition, and we must consequently go very slow. Nevertheless we got to the first usual encampment. This has been a most beautiful day, and the Portage appears in a pretty good state.

“May 15, Monday… Passed the Paddle River in the afternoon, where we found just water enough to allow us to cross without making a raft. There was a bark canoe at the [Pembina] River, in which we crossed ourselves & property, and encamped. The horses however will only be crossed tomorrow morning.

“”16, Tuesday. Fine weather. Came a good distance today considering the state of the horses, and encamped at Berland’s Lake.

“17, Wednesday. Very cloudy all day, and a little rain, but not enough to prevent us from going on. Came as far as Sturgeon Creek, and crossed all the property. The Horses however were left on the other side, in case of there being any thieves hereabout from the Fort.” The thieves these fur traders worried about were the Assiniboine Indians, who were renown horse-thieves. It was part of their culture, and all the fur traders knew this.

On the following day, Thomas Lowe crossed the horses early, and arrived at Edmonton House at 6 am. It had begun to snow, and continued to snow and sleet for the next three days. On Sunday the sleet turned to rain, and in the evening George McDougall and the Lesser Slave Lake party straggled in, with some of their packs wetted by the constant rain. All the packs would have to be opened and dried to prevent damage to the furs they contained, and that work delayed the departure of the express boats from Edmonton House. Their immediate destinations were Fort Pitt and Carlton House, downstream on the North Saskatchewan and the Saskatchewan Rivers. But these express men would waste little at these two provisioning posts, but continue their hurried journey downriver to Lake Winnipeg and beyond.

If you want to go back to the beginning of this series and follow it through, click here: http://nancymargueriteanderson.com/first-leg/

If you want to read the next leg of the journey, then click here: http://nancymargueriteanderson.com/seventh-leg/