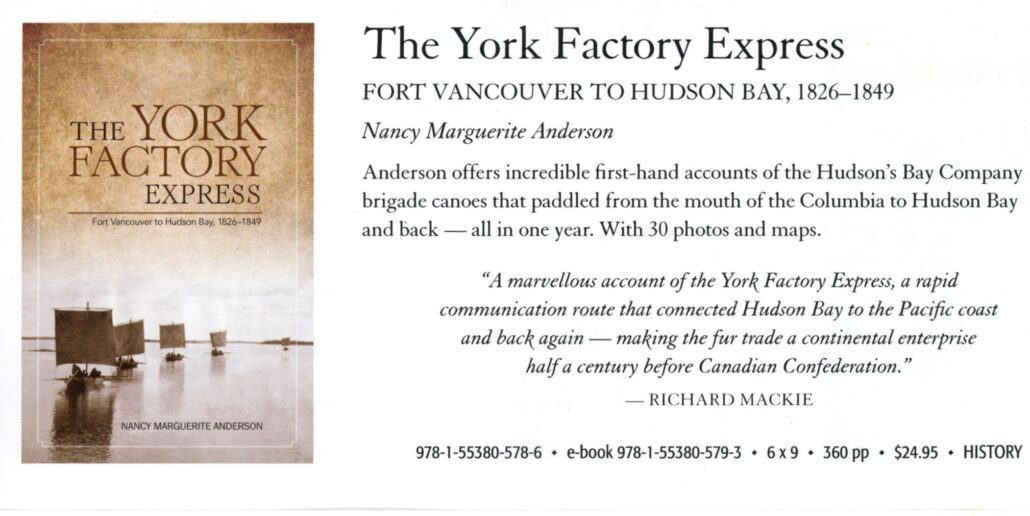 The annual York Factory Express journey to Hudson Bay, and its return as the Columbia Express, was unique to the Hudson’s Bay Company’s fur trade west of the Rocky Mountains after 1825. The thirty or so men who traveled out in the York Factory Express began their journey at Fort Vancouver, the HBC’s Columbia River headquarters, 100 miles east of the rugged points of land where the river rumbled into the Pacific Ocean. The express men paddled their clinker-built Columbia boats up the rock- and rapids-filled river to the base of the Rocky Mountains at Boat Encampment.

It was also a carefully timed journey. The men left Fort Vancouver in late March, in time to cross Athabasca Pass in the early spring, when the snow underfoot was solid and the weather generally good. They reached the Athabasca River when its ice was mostly melted. At the point where the Athabasca flowed as far south as it would go, they abandoned their canoes and boats and crossed the land portage to Edmonton House, on the North Saskatchewan River.

More transformations occurred as they reached Edmonton House. At that prairie headquarters the fast-travelling, lightly laden express party joined the Saskatchewan Brigades, who were travelling in their York Boats down rivers that flowed all the way to Hudson Bay. They reached the HBC headquarters in late June; by early July they were preparing for their return journey home. The Saskatchewan District men would return to Edmonton House in September. But the York Factory Express men, who had left their families in March, would not return home until early November. It took them an amazing seven and a half months to journey to York Factory and back.

This book tells the stories of the many adventures of the York Factory Express, and of the Saskatchewan Brigades. The stories are told in the words of the gentlemen, the educated, usually Scottish traders, clerks, and other administrators who wrote the journals. However, the men who made the express journey possible are the invisible, unnamed Canadiens and their Métis descendants who powered the boats across the continent every year between 1826 and 1854. The gentlemen were the passengers. The Canadiens, Orkneymen, and Iroquois, and their Métis children and grandchildren did all the heavy work and were almost entirely responsible for the success of the 5,400-mile journey. But their history was oral. If the gentlemen had not preserved the stories the voyageurs told them, we would not have a written record of this history today.

All of my blog-followers know how to order this book, but Booksellers in cities like Revelstoke, B.C., and Whitecourt, AB, need different information. They need to talk to the book suppliers that work with my publisher, Ronsdale Press, Vancouver, B.C.

Sales Representatives are scattered across Canada but most Canadian booksellers will know who they are. The Toronto representative is Publisher’s Group Canada, 201-128A Sterling Road, Toronto, Ontario, M6R 2B7. Phone number is 416-934-9900.

If you wish to get this book into your local bookstore, you can print this information out and take it to them. If you live in Vancouver, WA., I know that the “Friends of Fort Vancouver” already have the book on order. In Jasper, copies of The York Factory Express will be available at Jasper Museum. In Victoria, B.C., you can order the book at Munro’s Books downtown. Sadly, there is no bookstore at York Factory — that would be the ideal place to shop for it, don’t you think?

2 thoughts on “The York Factory Express for Booksellers”