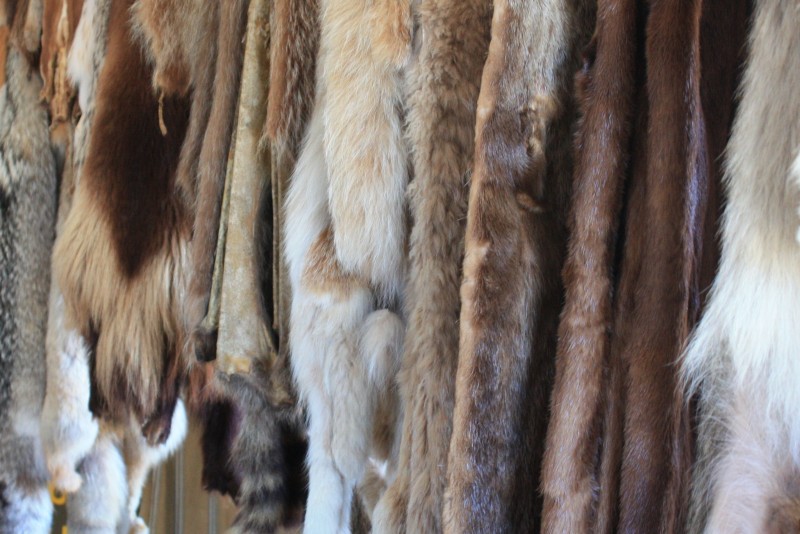 This selections of furs is displayed at Fort Langley, but the same furs would be found at any HBC fort in the territory.

William Brown was a spear-thrower in my book, The York Factory Express. You will find him mentioned in my book on page 17, when in his Fort St. James journal, the clerk who was taking charge of Fort St. James temporarily, in the Chief Factor’s absence, wrote: “Every arrangement being completed, both for the voyage to York Factory & to Fort Vancouver… Mr. James McDougall with 8 men took their departure from Stuart’s Lake for Fort Simpson, McLeod’s Lake, where they will join Messrs [William] Brown & [William] McBean with the people already there with whom they will proceed, under the command of Mr. Brown, for York Factory…”

In fact, I could write little more than I did about William Brown, because I knew absolutely nothing of him. I am not even sure I checked out who he was in Bruce Watson’s Lives Lived West of the Divide — and that was an injustice to William Brown. He’s actually a very interesting person, according to Watson, who says:

After entering the HBC in 1811, William Brown served in both the Churchill district and Deer Lake before returning to Europe for two years in 1815. In 1817, he returned to North America, working his way up through the ranks while serving at Halkett House, William House, Big Point House, Fort Dauphine, Fort Resolution and Fort Wedderburn, and became actively involved in the HBC-NWC dispute. In 1821, at the amalgamation of the HBC and NWC, Brown was appointed to the New Caledonia district and in October 1822, built Fort Kilmaurs, later called Fort Babine. He stayed in the area generally keeping the journals until 1826, and, from 1824, jointly ran the New Caledonia district with William Connolly. He was to explore the country in 1825, but illness and the unsettled nature of the natives prevented him from doing so. That year he was on crutches and the rheumatism in his right arm was so bad that he could barely write. In 1826, because of his deteriorating state, he was granted leave of absence in Europe, and died the following year.

Recently, however, I have read Geoff Mynett’s newly-published book, River of Mists: People of the Upper Skeena, 1821-1930 [Caitlin Press, 2022], and I found William Brown, and others, mentioned in his book. One of the others mentioned is Simon McGillivray, Jr., and here is his story. As you see, he leads us into William Brown’s story:

Simon McGillivray walked on the stones out to the point where the two rivers merged. He and his companions surveyed the scene before them in astonishment. The date was Thursday, June 20, 1833. They had just arrived at the Forks of the Skeena River. They were, as he reported to Hudson’s Bay Company governor George Simpson, “the first Whites who have seen the Babine and Simpson’s River so far down.”

This was the moment of his discovery. From his left flowed Simpson’s River, now called the Bulkley. From his right flowed Babine River, now called the Skeena. “Une grand Rivière,” his men kept saying quietly to one another as they looked at it. McGillivray wrote. “It is broader than Fraser’s River and may be compared with Athabasca River in its greatest breadth. I cannot but call it a noble stream.” He would likely have been satisfied that he had accomplished the journey his colleague William Brown had tried, but failed, to make seven years before.

Interestingly, it appears from the endnotes that Simon McGillivray Jr. came upriver from Fort Simpson, on the coast, to make his exploration: he did not begin his journey from Fort Kilmaurs. [Simon McGillivray Jr. was actually Métis, by the way. It was not uncommon for the Métis descendant of an Englishman or Canadian-Scot to consider themselves white.]

But, William Brown is the person who we are speaking of here. Mynett tells us that William Brown was born in Kilmaurs, Ayreshire, Scotland, in 1790. “Like so many other Scots, he joined the Hudson’s Bay Company as a young man and served at a number of posts, including Fort Wedderburn in Athabasca (now northern Alberta), and Fort St. James. I quote from Mynett’s book:

Company records described him as a short, slender man of five feet eight, an excellent trader, fully qualified for the charge of a district, active, courageous and highly deserving of promotion. He was a good man for a difficult job. Governor George Simpson had a high opinion of him….

In 1821, after some years of aggressive and at times, violent competition, the North West Company merged with the Hudson’s Bay Company. During the conflict between the two companies in the ten years preceding the merger, Simon McGillivray [the same Simon McGillivray as above?] had a famous confrontation with Simpson and Brown. This took place in October 1820 at Fort Wedderburn, where Brown was chief factor. Simpson who happened to be at the fort at the time, encouraged Mr. Grignon, a constable from Montreal, to arrest McGillivray. “Mr. Grignon seized Mr. Simon McGillivray. Brown wrote in the fort’s post journal, “and at the same time called upon us in the king’s name for assistance.” While waiting to be sent to Montreal for trial, McGillivray was imprisoned in the fort. During the following six weeks, Brown and McGillivray had time to become well acquainted. Then McGillivray escaped. One report said he was disguised in the clothes of his country wife, as the Indigenous women who became the common-law wives of fur traders were known.

But this is William Brown’s story, or at least it was when I started this post. Mynett goes on to tell more of Brown’s story: how, in 1821, Brown was sent “to build and manage a new post on the long and narrow Babine Lake, west of Stuart Lake…

Brown and his party managed the difficult twelve mile portage from Stuart Lake to Babine Lake, found a suitable spot up the lake and started to build. By the end of the month, they had erected the first buildings of the new post. As the men raised a flag post and ran up the Company’s flag, Brown christened the post Fort Kilmaurs… They celebrated the event with a dram of liquor and a volley of shots. This frightened the local Indigenous people, who thinking they were all about to be slaughtered, fled into the woods.

Traders from the west were coming upriver to trade for the furs that should have gone to Fort Kilmaurs. Russian-American Co fur-traders, perhaps? Boston men from the American ships that cruised the coast at this time? Brown did not know at that time, but I think he learned later that they were First Nations traders who acted as middlemen and traded the furs collected in the interior with the Russians and Americans on the coast, as you see below. In April 1823, Brown wrote to his superiors and recommended that the best way to fight the competition “might be for the Company to open a post at the Forks [of the Skeena and Bulkley] and take them downriver to the coast. This following quote is from Geoff Mynett’s book:

A cautious Scot, he wrote that he thought at some time, sooner rather than later, he should explore the route to the Forks and assess the situation. On April 15, 1825, realizing that what he had feared had happened, he wrote that Indigenous middlemen from the coast had already reached Kisgagas and were within a short distance of Babine Lake. Unless checked, they would reduce the supply of furs in the region even more.

He decided it was time for him [to] make the journey to the Forks. Governor Simpson approved and wrote to him, “I am rejoiced to find that you are preparing to undertake a Voyage of Discovery towards the Coast. It is an object of great moment that a friendly understanding should be established with the Indians as it is probable that the Committee will Direct that Posts be settled both in the Interior and on the Coasts as far to the northwards as the British territorial rights extend.”

William Brown began his journey down the Babine River toward the Skeena, but weather and sickness stopped him before he reached the junction of the two rivers. He returned to Fort Kilmaurs and spent the next two months in bed: he had lost the use of his legs and walked on crutches, if he walked at all. He tried once more to make this journey of exploration the following summer, and again failed. In 1826, he led out the Express boats from McLeod Lake, via the Peace, the Athabasca, and the Clearwater River to Portage la Loche. [I have never been able to determine for sure that James McDougall and William Brown came via the Athabasca River to Lesser Slave Lake, Fort Assiniboine, and Edmonton House, and I think they did not — in spite of the fact that I say they did!]

So, there we have William Brown’s story. It wouldn’t have helped me to know it when I wrote The York Factory Express. Like I said, he was a spear-thrower, and one does not spend time on a spear-thrower. But in Geoff Mynett’s book he comes across as someone I would have liked to know more of, and so I am happy that Geoff did know more!

I did in fact find out a little more about Simon McGillivray, Jr., who is also mentioned in this post. In about 1826 he was in charge at Fort Nez Percès [Walla Walla]. His brothers were Joseph McGillivray, who was employed by the HBC at Forts Okanogan and Alexandria, and William, who was employed at McLeod Lake. Simon was also the father of Montrose McGillivray, of whom I also write. I found him here: https://nancymargueriteanderson.com/ten-half/ , and so he did travel out from Fort Vancouver in the York Factory Express, but only as far as Fort Nez Percès.