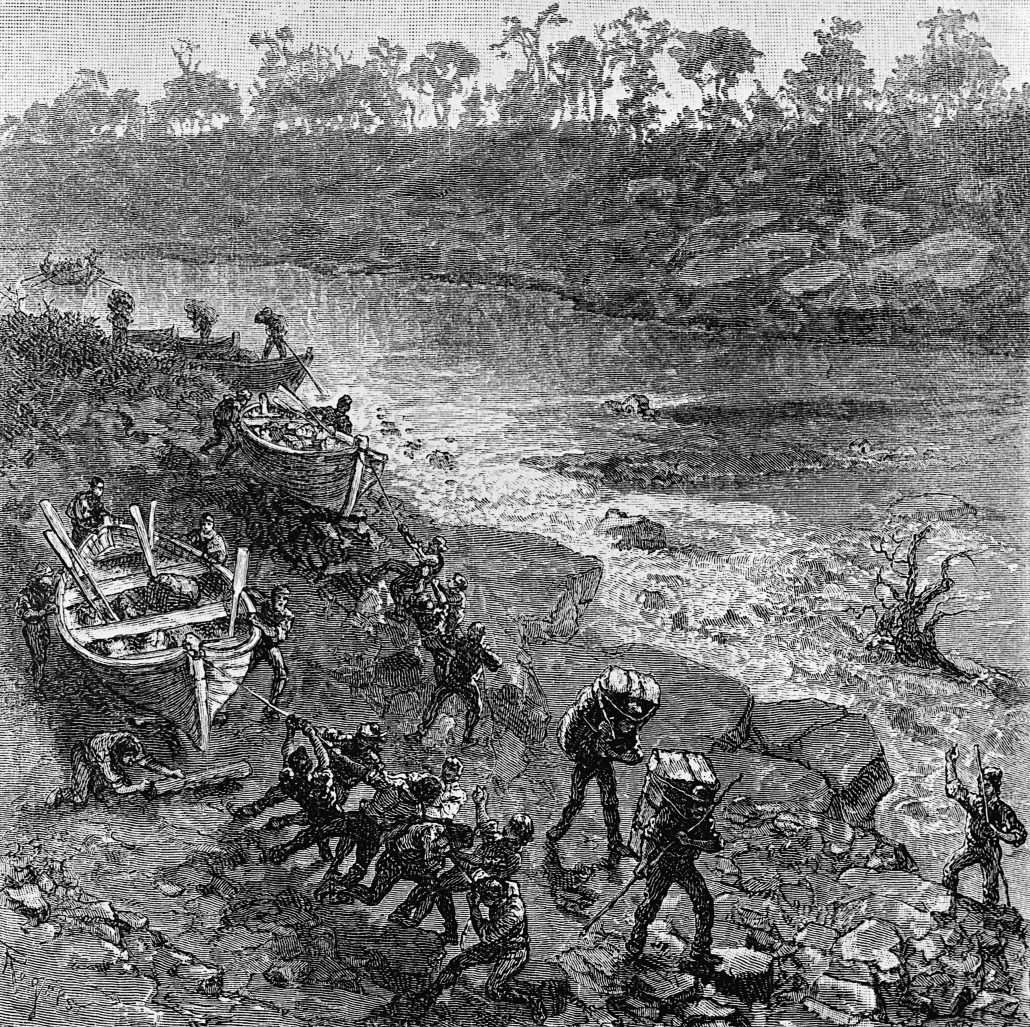 The Rivière Maligne, otherwise known as the Wicked River, earned its ferocious nick-name over the years.  The Maligne was, of course, the Sturgeon-Weir River that led the early free-traders, the North West Company men, and those of the HBC, north to the fur rich lands of the Athabasca District. In summer 1843, HBC clerk Augustus Peers began his journey north to the Athabasca from Cumberland House. He says this of the Sturgeon-Weir River:

On Sturgeon River, from the shallowness of the water our onward progress was slow, tedious, and very harassing to the men, who during the whole time we were on it were either urging the boat forward with setting poles, or where the water was too shallow and the channel too tortuous to proceed in that way they were obliged to jump into the water and drag the boats by main force.

As the book, Exploring the Fur Trade Routes of North America, explains: “For fur traders heading upstream 200 years ago, loaded with goods for the Athabasca region, the river was less than delightful. The voyageurs called it Rivière Maligne, the “Wicked River,” for, as Alexander Mackenzie said, it was “an almost continual rapid…. Tough slogging or not, this was the gateway to the north country and, beginning with Joseph and Thomas Frobisher, who established the first post on the Churchill River in 1774, a trickle of traders soon became a flood.”

The Sturgeon-Weir River flows from the north, into the north end of Sturgeon [now Namew] Lake, which is just upriver from Cumberland Lake. If the HBC men are heading toward the Athabasca in 1843, they are poling their York Boats UP this rapid-filled river. Augustus Peers’s manuscript continues, with a description of the fish that gave this river its name.

Occasionally a huge sturgeon would be discovered in a shallow, floundering about. On such occasions the crews would arm themselves with poles, axes, and stones, and make a rush for the prize and fortunate were they whose boat eventually carried the fish.

Such incidents as these served to cheer the men and I was surprised to see with what good will and indifference they toiled the whole day without a murmur. The scenery here presented the same features as elsewhere. The banks of the river were alternately high and low but covered with the same dense mass of evergreen pine and willow distorted into every shape from the way in which nature had crowded them together. Fires, either spontaneous or from the carelessness of Indians, ravaged these forests to a great extent and miles of charred and blackened trees may be seen in travelling along these rivers.

Becoming tired of the slow progress of the boats, Peers went hunting ashore and got lost. I have yet to find a greenhorn fur trader who did not go exploring without getting lost — they were all over-confident, did not understand the size of the country,  and over-estimated their ability to find their way. Fortunately, Peers wrote that

after a weary walk I came again to the river where to my delight I found the boats ashore for breakfast at the entrance of a small lake. The guide told me he thought I must have lost myself and he had fired several shots which, however, I had not heard. I gained a voracious appetite at the expense of a pair of trousers which were torn to ribbons and rendered hors de service.

It is after this that Augustus Peers’s manuscript becomes vague. “Shortly after this we entered Beaver Lake and put on shore on a small rocky island where we took breakfast.” The lake Peers calls Beaver Lake is today’s Amisk Lake: the word Amisk means Beaver, in Cree.

As you can see from this earlier blogpost, https://nancymargueriteanderson.com/two-canoes-five/ I really had very little notion of the route these men travelled, and of course I now want to know more! Unfortunately, Peers gave showed little interest in where he was. “Whenever we arrived at a portage,” he said, “I amused myself by fishing in the eddies along shore.” And then,

In course of time we arrived at another of the Company’s forts situated on an island in Lac La Crosse.

Well, there are only a few dozen portages, détroits, rapids, traverses, rivers, and lakes between Cumberland House and Lac Ile-à-la-Crosse! Fortunately, I discovered that the best maps by far for discovering where the men were on this set of rivers is found in John Franklin’s Narrative of a journey to the shores of the polar sea, in the years 1819-20-21-22. These maps are superb! You will find some version of this book in your archives or local University Library.

Also fortunately for us, Archibald McDonald, who is the actual author of Governor George Simpson’s 1828 journal, recorded many, though not all, of these landmarks. Like Peers, Governor Simpson and McDonald breakfasted on an island in Beaver Lake before they began their ascent of the river that NWC explorer David Thompson called “Grass River.” Today this is still considered part of the Sturgeon-Weir.

Commenced Portage de Pins at half-past ten. Reached Carp Portage at 5 o’clock; made the Birch Portage and several strong rapids before we got to another stretch of still water, where we put up a little before eight. Had much thunder, and now and then, tremendous heavy showers of rain.

Then they paddled into Lake Heron, [Mirond], where two portages came close together on either end of a wider section of the river they might have called a lake; the Island, and Pine Portage. Once through Heron Lake they breakfasted at the Détroit, which is the strait at Pelican Narrows. Two hours later they had crossed Pelican Lake. Three more short portages led them upriver once again, and “after making Portages des Bois in a very heavy shower of rain,” they paddled into Woods [Wood] Lake. Crossing the lake in canoes took seven hours, but the portage that would lead them north into the Churchill River ended in a lagoon at the northern end of today’s Wood Lake. This is the portage I want to learn more about. I have called it “Frog Portage,” in the blog-post attached to this post. But that is not its real name.

This portage is the famous Portage-de-Traite, which led the HBC men 300 yards across an easy height of land into Trade Lake, on the Churchill River. Once they had crossed this portage, they were on waters that flowed east to Hudson Bay. “Portage-de-Traite takes its name from an event which took place in 1774-5,” an imaginary settler named Ian Alexander Bell Robertson tells us:

Joseph Frobisher, a trader from Canada, after having wintered nearby, met in the spring a group of Indians making their annual journey to Churchill to trade. He persuaded them to trade with  him instead and soon he had all the furs his canoes could carry. Before that, it had been called Frog Portage from the Crees having placed a stretched skin of a frog there as a sign of derision to the natives of the country whom they regarded with contempt because, among other things, they were ignorant of how to prepare, stretch and dry the skins of the beaver.

Yes, I can tell you are all clamouring to know where this imaginary settler’s writings are found. Here is the source: Beyond the River and the Bay: Some Observations on the State of the Canadian Northwest in 1811 with a View to Providing the Intending Settler with an Intimate Knowledge of That Country, by Eric Ross [University of Toronto Press, 1973]. What a find!

I am interested in Portage-de-Traite, where Joseph Frobisher made a fortune in furs. This portage is 200 miles east of Lac Ile-à-la-Crosse, from which the Churchill River flows. Here is a little background, from Ernest Voorhis’s “Historic Forts and Trading Posts of the French regime and of the English Fur Trading Companies.” Alexander Henry Sr met Peter Pond and the two Frobisher brothers at Lake Winnipeg in 1753, and Henry and the Frobishers built a substantial fort on Beaver Lake and stayed there 1775-76. In April 1776, Thomas Frobisher erected a fort on the Churchill, called Fort du Traite from the trade made with the First Nations at that place. He reached the Churchill by way of Frog Portage [Portage-de-Traite]. The winter of 1776-1777 he passed on the west shore of Ile-à-la-Crosse lake where Ile-à-la-Crosse fort was later built.

According to Daniel Williams Harmon, it didn’t take all that long to make the journey from Cumberland Lake to Portage-la-Traite — Mind you, Harmon is travelling in birchbark canoes, which are much faster than the York Boats that the HBC men used! He left Cumberland House on August 12, 1808. On August 13 he is at the entrance of Rivière Maligne “or Bad River,” where it runs into Sturgeon [now Namew] Lake — on August 14 he is in Beaver lake. He says in his journal:

We have passed the greater part of the Day, in coming up the above mentioned River, which is a continuation of Rapids from one end to the other, and much water in it.

So even in canoes this is a difficult river to ascend. On August 16 he is in Pelican Lake, but “have been most of the Day sailing over Lac Martin [now Mirond Lake].” So, Lac Martin is another name for Heron Lake! On August 17, he reached

Portage du Fort du Traite or Trading Portage, so named from a circumstance that happened here thirty-four years ago to Mr. Joseph Frobisher, who met here a considerable Band of the Natives whose Canoes were loaded with Furs which they were taking to York Factory (Hudson Bay) however the above mentioned Gentleman gave them Rum to drink and they soon were prevailed upon to traffic their Beaver, and Mr. Frobisher built a Fort, where they past that and several following Winters, which was at that time the most northern Post belonging either to the North West or Hudson’s Bay Coy’s.

A week later Harmon is at Isle-à-la-Crosse, and he does not describe this section of the Churchill River except to say there were several Lakes and that “in the river our way has been obstructed by thirty-six Portages — that is [places] where the Canoes & lading is carried on the People’s back.” Not an easy river to travel, it seems. The source for the above quote is: Harmon’s Journal, 1800-1819, by Daniel Williams Harmon, with a forward by Jennifer S. H. Brown, Professor of History, University of Winnipeg [Touchwood Editions, 1957].