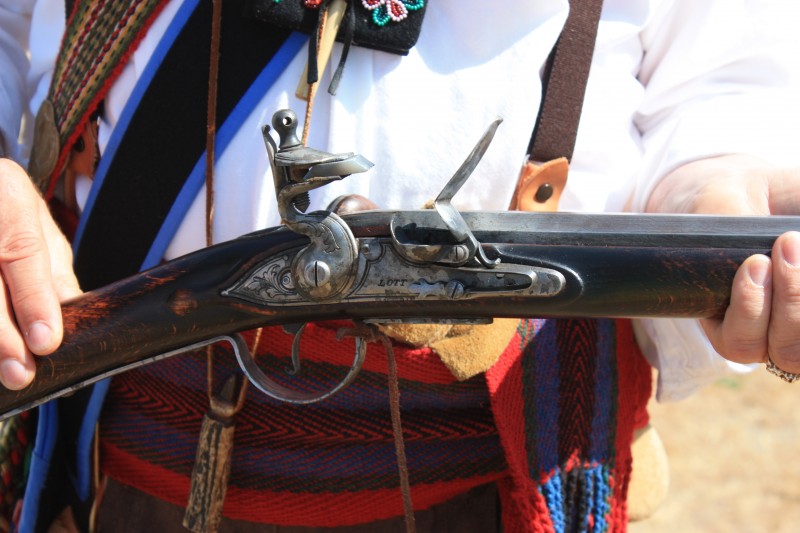 The Voyageur and his flintlock gun

In his journal it appears that John Work, and his incoming party, has just passed the Council’s Punch Bowl when they “Encamped in the afternoon near what is called the big hill.” In fact they have gone well past that place if they are in fact at the top of the Big Hill (they are not). This journey was done in three stages: the first was the descent of the boggy “foul or faint-hearted river” [Pacific Creek] from Council’s Punch Bowl to the place where they would leave the valley to climb over the ridge that separated Pacific Creek from the Wood River. In 1823, Work’s party had camped in the water-logged Pacific Creek Valley, in what Thomas Lowe later called “the swamp.” This sloping valley was always wet from slow-melting snow and, probably, drainage from the glaciers above. Between their camp and the beginning of the big Hill was a rocky ridge or saddle which they must clamber up.

Overcast in the morning. Proceeded on our journey, after ascending a pretty steep hill on the West side of the valley, we came to the top of what is called the big hill..

When they reached the top of the saddle, they were 5,000 feet above sea level and at the actual beginning of the Big Hill, or the trail down the west side of the Rocky Mountains. Looking back, the Pacific Creek valley, down which they had traveled, lay some 750 feet below them to the east. At the north end of that sloping valley, Athabasca Pass loomed 700 feet above the height of the saddle — 5,700 feet above sea level. It must have been an impressive view.  [Note to myself, I am going to have to check whether this is meters, or feet. But in the meantime, you can read this]. Let me remind you that they are riding horses across the pass: something they also did in the incoming express in later years. There may be a few pack-horses here, but not many. Though Work does not say it, I suspect the gentlemen are riding most of the way, although there are certainly spots where they would have to dismount to allow the horses to find their way safely down the hill.

After a rest and hot meal at the top of the saddle, they would begin their journey down the hill. In later years this trail was much easier to travel. In his article in British Columbia History, Summer 2011, John Whittaker writes that “From the junction of Jeffrey Creek and Wood River (Moose Camp) the straight line distance to Boat Encampment downstream is about 24 km… In 2002 Bob Hallam, local Hinton historian, Tom Peterson, Alan Ballash and myself hiked from Moose Camp down part of the Upper Wood River Batture and discovered first hand the difficulties involved. The choice lies between pushing through a timbered bog flushed with ground vegetation and sprinkled with a generous supply of windfalls, or walking in the fast, deep current of the river to get around the inner bend to the next gravel bar. We found it particularly exhausting in this area.” John Work’s journal continues as he passes through this difficult section of road:

We came to the top of what is called the big hill, which we descended through a very steep and difficult road in many places towards the top & on the top of the hill boggy, and often almost blocked up with fallen wood. Towards the bottom of the hill the road is harder & better. At the bottom of the hill we again fell into the faint hearted river which here received another small river from the Westard. We proceeded down a narrow valley between steep hills some of which are topped with snow though covered with wood nearly to the summits. The river often divides into different channels and winds from side to side of the valley which is here called the flats and is entirely overflowed in the season of high water.

At this point, he is on the Wood River. Both Pacific Creek and Jeffrey Creek flow into the Wood from the north. You might ask why they did not just follow Pacific Creek down the hill: clearly there is no easy passage down that creek and so the men had to find their way over the dividing ridge to Jeffrey Creek. Almost all the men who came down this hill (or went up) made mention of the size of the trees they found here:

The hill which we came down is covered with very large wood, chiefly pine and cedar; some of the largest of the latter are 12 feet in circumference. I measured one which is 18 feet in girth. Some of the largest of the pines were 10 to 11 feet in girth. There is also a small shrub called the prickly ash. Some birch are met with at the bottom of the hill. The cedar are not found farther up than about the middle of the hill. On reaching the bottom of the hill the climate seems greatly changed from what we have had some time past.

Sunday 12 [October]. Thick fog in the morning, clear afterwards. Light frost. Proceeded on our journey. Part of the day the road lay through a point of woods & was very bad continued bogs & mires in which the horses frequently stuck. Afterwards the road lay down the river which was frequently crossed in what is called the second flats. The valley is still very narrow having high hills topped with snow on each side, the river is divided into a number of channels which would make a pretty large stream if in one body. It was continued falls  opposite where we travelled in the woods. We made but a short days march on account of the softness of the road.

Notwithstanding the length of time we have been crossing the Portage, as it is called, the road is in unprecedented good order, & remarkably dry, & the rivers unusually low.

So John Work and Peter Skene Ogden had an easy passage down the Grande Cote, in comparison with others who made the same journey over these early years. The “continued falls” he mentions above would be rapids in the river, and there were plenty of them!

Monday 13. Thick fog in the morning. Set out at our usual hour, and arrived at the end of the Portage about 10 o’clock, where we found Mr. [Alexander] Kennedy and Mr. [Alexander] Ross encamped with 14 Men. They have been waiting for us here 20 days.

This is Boat Encampment, now buried under the waters of Kinbasket Lake; as is much of the Wood River in fact. All this history, drowned. Alexander Kennedy was  Chief Factor in charge at Spokane House, who was supposedly heading south to Fort George [Astoria]. I find it interesting that he would be spending 20 days sitting at Boat Encampment, but perhaps he did that. The Mr. Ross appears to be Alexander Ross, who also served in the territory for another two years. In his case, however, he might have gone out of the territory for a year and come back, which would give Mr. Kennedy a better reason for traveling up to Boat Encampment with him.

Update: Thanks to a reader, I have the answer to this question. When Work and Ogden arrived at Boat Encampment Ogden handed Alexander Ross a letter from Governor Simpson, offering him a three-year appointment in the Snake district at a liberal salary. Ross, who had been planning to leave, took up the offer and stayed. The journal continues below:

Employed the afterpart of the day examining the packages which we brought. One of the guns was burst.

Tuesday, 14. Thick fog in the morning. Employed the greater part of the day preparing to fall down the Columbia and to send back the horses [to Jasper’s House], part of which are to be loaded with bales of Red corded cloth which is not saleable in the Columbia.

This place is surrounded with high hills, many of which are topped with snow and covered thickly with wood near the base.

The next morning the men begin their journey down the Columbia River in the boats that have been waiting for them at Boat Encampment:

Wednesday 15th. Thick fog in the morning, raw cold Weather. Wind Southerly. Embarked at 9 o’clock and proceeded down the Columbia River in three boats or kind of wooden canoes worked by 8 Men each, who row with paddles and not oars. These boats will carry about 55 pieces and are made of a light construction so that 12 men can carry them across the portages. The boats are very little loaded having only some Indian corn besides what we brought with us. The Columbia all the way we have come is a fine, large, deep river with high hills on each side, several of which are topped with snow…

I think you will find the ride down the Columbia River will be an exciting one. But you have to wait for it. Sorry. I will pause here.

To go back to the beginning of this thread, click here: https://nancymargueriteanderson.com/two-canoes-one/

The next post in this thread will likely be a Governor Simpson post, which will be found here when published: https://nancymargueriteanderson.com/two-canoes-twenty-three/

The next John Work post, which will bring us down the Columbia River, will be found here when published: https://nancymargueriteanderson.com/two-canoes-twenty-four/ (It will be published later today, so look for it if I forget to make this a live link).