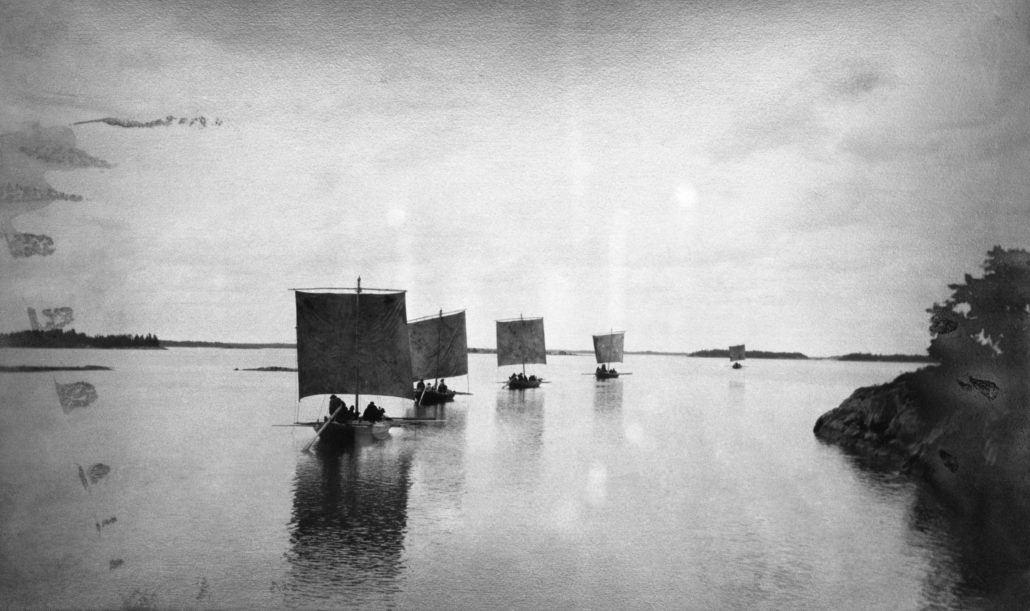 Although the HBCA records this photo is taken near Norway House, east of Lake Winnipeg, the Glenbow Archives says these York Boats are sailing on Lesser Slave Lake. Glenbow Archives, na-2283-10, used it with their permission.

On their arrival at Norway House, east of Lake Winnipeg, the men of the returning York Factory Express (now called the Columbia Express) knew they had completed the most difficult part of their journey: the 400-mile-long climb up the east side of the Canadian Shield from Hudson Bay. Oxford House, through which they had passed a week or so earlier, was 632 feet above sea level, and Norway House 720 feet. The climb was not yet finished — Edmonton House was 2,200 feet above sea level, and Jasper’s House had an altitude of 3,400 feet.

West of Norway House, the challenge was the crossing of the top of Lake Winnipeg, where dangerous winds from the South could push their boats into the limestone cliffs that lined the lake’s north shore. There was no shelter here, and the men must be very careful or they could lose boats or trade goods — or men. Sometimes they did.

Between Playgreen Lake, where Norway House stood, and Lake Winnipeg itself, was the long, narrow piece of land called Mossy Point. The first Norway House had stood on Mossy Point, where Warren Landing is today — the later post was six or so miles away, up the narrow, shallow, and winding channels of Playgreen Lake.

In his 1835 journal, James Douglas described Mossy Point and the difficulties of finding sheltered waters on the north and east shores of Lake Winnipeg:

Mossy Point which is about 6 miles distant [from the new location of Norway House] rises abruptly from the water’s edge, and during stormy weather the heavy swell breaks angrily against its steep ascent, and renders it at such times quite inaccessible. The coast for 27 miles beyond Mossy Point [in Lake Winnipeg itself] partakes of the same inaccessible character & forms but one continued unbroken line of abrupt ascent, undistinguished either by bays or rivers wherein a secure harbour might be found in case of boisterous weather, whence it becomes a matter of necessity never to attempt this part of the Lake particularly with loaded craft except when nearly in a calm and tranquil state.

Of course, no one listened to that information, and there were many times when the York Factory express boats crossed Lake Winnipeg in dangerous weather. I do not know if any were ever lost, however — although certainly they must sometimes have been swamped in the lake’s rough waters.

Many times the York Boats followed the shoreline around the top of Lake Winnipeg, taking a journey that was some 85 miles long. Those who were less patient, or who had finer weather, rowed straight across the lake to “the Horseshoe” [the horseshoe shaped bay] south of the entrance of the Saskatchewan River. In September 1832, after the Saskatchewan brigades reached Edmonton House, its clerk recorded that “much risk was run in the crossing the Lake Winnipeg.” My great-grandfather, Alexander Caulfield Anderson, traveled West in those boats that year.

In 1847, clerk Thomas Lowe and his brigade of York Boats had some difficulty in crossing the top of Lake Winnipeg. This is how his journal reads, as he leaves Norway House on Saturday, August 7th.

Started from Norway House this morning at 9 o’clock with the Saskatchewan Brigade, consisting of 11 boats in charge of Mr. O’Brien. As the wind was ahead we could not enter Lake Winnipeg, and encamped on an Island at the end of Play Green Lake.

Sunday 8th. Warm weather. Started early this morning but only reached Norway Point [Playgreen Lake], where we remained the rest of the day, as the wind was strong ahead. A very severe thunder storm at night.

Monday 9th. Took advantage of a slight change of wind this morning, and got about 10 miles past Mossy Point, but were then obliged to run ashore and unload the boats. Here we were wind-bound the remainder of the day.

Thomas Lowe’s boats were now on Lake Winnipeg, where it was not uncommon for boats to be windbound for days on end.

Tuesday 10th. Left our encampment again this morning with a fine breeze of wind, which sometimes died away and freshened in the course of the day, so that with pulling [rowing] and sailing we managed to come within about 20 miles of the Grand Rapid [Saskatchewan River] before night. Put ashore for supper, and pulled about 10 miles afterward.

Wednesday 11th. Fine weather, but strong head wind, so that we have been wind-bound all day on a large Island about 10 miles distant from the Grand Rapid.

Thursday 12th. Raining at intervals during the day. Took advantage of a slight change of wind this morning to start from the Island where we were wind-bound yesterday, and succeeded in getting over to the entrance of the Saskatchewan [River] before noon. The water in the River is low, and the boats will have to make 3 trips over the shallows before reaching the portage at the foot of the Grand Rapid. Most of the boats made two of these trips this evening, and the remainder will be brought up tomorrow.

So in 1847, it took Thomas Lowe and his crew six days to cross the top of Lake Winnipeg because of the constant head winds. In 1826 it had taken Aemilius Simpson’s crew only two days. George Traill Allan’s crews took three days and enjoyed some very stormy weather. In 1848, Thomas Lowe took four days to cross the lake, as did John Charles’s express of a year later. But in 1827 and in 1835, Edward Ermatinger [1827], and James Douglas [1835], both took five days to cross the lake in stormier weather than Thomas Lowe enjoyed. It his case, it was the direction of the wind that made the difference.

It is also interesting what you can learn about the river from the surviving York Factory Express journals. From Thomas Lowe’s journal I learned that there were shallows at the mouth of the Saskatchewan River (where it fell into Lake Winnipeg), that no other express man mentioned. It is not like we can go there and discover how the river looked in those years, because this section of river is behind an enormous dam. The river is drowned. The Grand Rapids are gone, as are the ferocious Red Rock Rapids upriver. This stretch of the Saskatchewan River from the Pas to Lake Winnipeg is entirely different from what it used to be, which makes it more difficult to write about. But we are fortunate, that from the tiny details written in these few journals that are preserved in archives, we can build the big picture. That is the fun, and the challenge, of doing this kind of research!

My next blogpost will take us from the mouth of the Saskatchewan River where it flows into Lake Winnieg, past Red Rock Rapids and all the way to historic Cumberland House. This post is found here: https://nancymargueriteanderson.com/thirteenth-leg/

If you want to go back to the first post and follow this story all the way through from its beginnings, go here: https://nancymargueriteanderson.com/first-leg/

Finally, if you wish to purchase my book, “The York Factory Express,” you can do so through my publisher, here: http://ronsdalepress.com/york-factory-express-the/ Thank you!