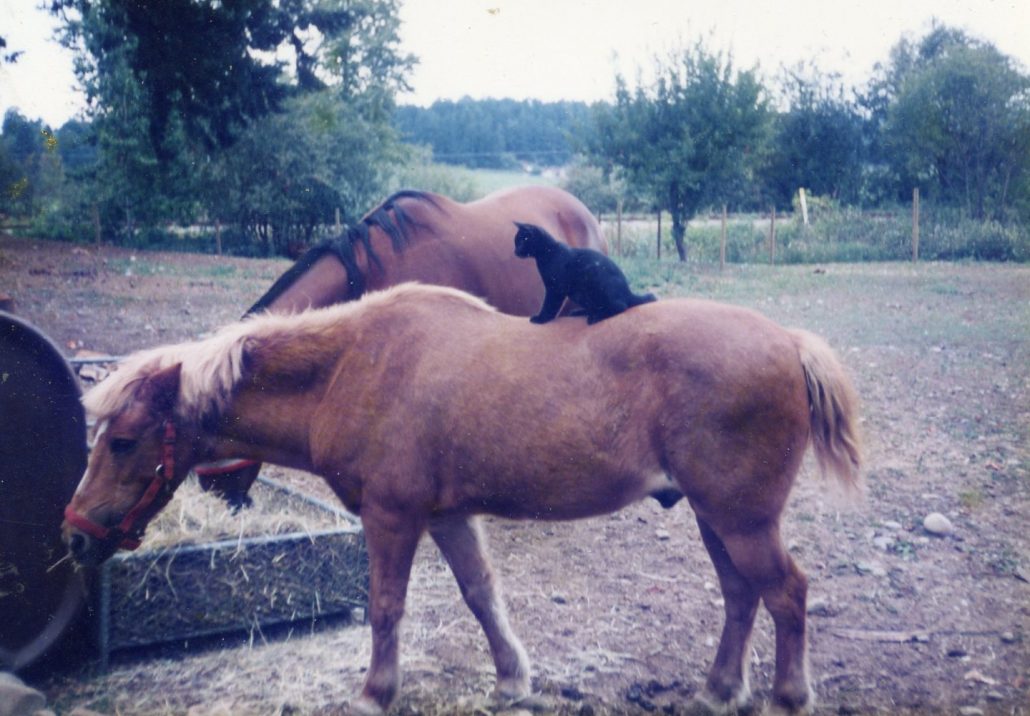 Horse with Cat. No one seems too bothered by this (certainly not the horse). The more important thing to know, however, is that the smaller horse is more likely to be the size of the brigade horses than the larger horse. The brigade horses weighed 700 to 1,000 pounds, more or less — this horse is on the smaller size of this weight spread.

Did you know that the HBC men west of the Rocky Mountains imported horses from the Saskatchewan district to increase the number of horses in their own district? They did indeed. Alexander Caulfield Anderson presented the idea of importing horses to Eden Colvile in spring, 1850, as Colvile passed through Fort Colvile on his way out of the Columbia district. In April 1851, Anderson addressed a second letter on this subject, probably to Governor Simpson. It worked. In July 1851, Eden Colvile wrote to advise the members of the Board of Management that:

Rowand [of Edmonton House] had been instructed to provide and forward to the Kootenais, this season, a large number of Horses for the use of the Fort Colvile and New Caledonia brigades. It is very probable that he may not be able to comply with this Resolve to the full amount named, say 150 horses, but I am in hopes that a large number will be forwarded. I think that this band of horses should winter at the Kootenais, and might be brought to Fort Colvile in the spring. I think that you should impress very strongly on the gentlemen in charge of those Brigades, the necessity of taking the greatest care of the horses attached to their District, as the expense of sending over these horses will be very considerable, besides the risk they run of being stolen by the Blackfeet on their way… I trust that the proposed improvements in the road from Fort Hope to the Similkameen Rivers will tend also to lessen the annual loss of horses. [B.226/c/1, HBCA]

John Rowand loved his horses. In another letter to Governor Simpson, Colvile described Rowand’s obvious displeasure when he was instructed to supply horses to the Columbia district:

No. 84 was carried in spite of very black looks and many grunts from our friend Rowand; but [John Edward] Harriott assured me the horses could be procured, and by proper arrangements safely forwarded to Colvile, and I am inclined to think that should this experiment succeed, a very profitable trade might be carried on in this way, as the price of horses will be more likely to rise in the Columbia than fall. I have written to [Donald] Manson & [A.C.] Anderson to take care of these horses, as we cannot promise them a regular supply by this route. [Eden Colvile’s Letters]

The Saskatchewan horses had not arrived at Fort Colvile when Chief Factor Peter Skene Ogden’s temporary replacement, John Ballenden, arrived at the post in November 1851. He found Alexander Anderson sick from the influenza which raged through the territory this year. He put William Sinclair Jr. in charge of Fort Colvile, taking Anderson down to Fort Vancouver with him in the express boats.

The winter passed quietly, and in February 1852, Donald Manson expressed his delight at the news of a fresh supply of horses from the Saskatchewan District:

I am, indeed, happy to learn that you have taken measures to forward a band of horses from Saskatchewan for the transport of this quarter, God knows they are much required here. Last year [1851] we had barely enough to carry the Outfit, notwithstanding its being much curtailed, and when such is the case, it comes very hard on the weaker animals, many of whom cannot carry loads all the way from Fort Hope to Alexandria, and when dire necessity compels us to make them do so, they not infrequently die during the Winter. The road to Fort Hope, tho’ now much improved, is still a rugged one for Horses, and you may be sure that, unless we are provided with a few spare animals to relieve those who may unavoidably be injured or maimed on the route, no care or attention on the part of the officer in charge can prevent a loss being sustained in those animals annually. During my Predecessor’s charge, and indeed until this new route was opened to Langley, we always had from 50 to 60 spare horses attached to the brigade, and by this means the labour to the animals was so much reduced that seldom any of them were seriously injured on the route. [D.5/33, HBCA]

At Fort Victoria, James Douglas expressed his disappointment that horses were being shipped across the mountains. He had not been consulted, and considered that the new Kamloops stock-farm would provide sufficient animals. In 1850 he reported that:

Our attention having been attracted by the alarming loss of horses experienced during the last two years, by the Brigades travelling to and from the interior; to the importance of securing means of transport for the future, a band of 87 brood Mares, to be hereafter increased to 100, are to be retained at Thompson River [Kamloops] exclusively for the purpose of rearing horses. [Fort Victoria Letters, p. 110-111]

What happened immediately, of course, was that there were a hundred horses NOT available as pack-horses for the brigades. I would have thought the Saskatchewan horses would have welcomed, but they were not. On one occasion, because of the shortage of horses, Donald Manson borrowed a large number of animals from his Indigenous neighbours, and fifty or so were lost on the trail. Naturally, the owners demanded replacement horses, and all of this replacement stock came from HBC horse farm. Another massive and expensive loss of horses for the HBC men!

The Saskatchewan horses arrived at Fort Colvile in 1852,  a few months after Anderson had left the post: at a guess they received about eighty horses from the east side of the Rockies (63 went to New Caledonia). In 1853, James Douglas reported:

The horses from Saskatchewan arrived at Fort Colvile last autumn, after a loss of 20 head from accidents and fatigue on the journey. These arrivals may no doubt be turned to good account in this district, but as a general rule I would not recommend attention being paid to any demands from this District unless sanctioned by the Board of Management. I am compelled most reluctantly to observe that notwithstanding all my exertions, the transport horses of this District do not receive that degree of care and attention which those valuable animals deserve, or the annual loss from old age, and unavoidable accidents, would be little felt, and easily supplied from our own resources. [D.5/36, HBCA]

James Douglas was at Fort Victoria, however, and had little idea of what on in the interior in regards to the horses. He only heard the stories, and the complaints, but he never saw the trail. In June 1853, James Douglas received a complaint about the Saskatchewan horses, which was passed on the Angus McDonald at Fort Colvile:

I am sorry to be under the necessity of stating to you a complaint made by C.T. Manson, about the horses which were received last year from the Saskatchewan, he says that out of the 64 horses received at Thompson River 49 of the number bear the Colvile brand, and are worn out worthless animals which have been exchanged for those received from the east side. Will you inform me if such report be correct and if you ha authority from Mr. [John] Ballenden to make such exchange. [B.226/b/7, HBCA]

Well, its hard to know as there is little more information about these horses, but Angus McDonald was not the type of person to substitute bad horses for good, I think. He may have branded the horses as they arrived at Fort Colvile. If he had kept one-third of the horses that arrived at Fort Colvile, then he would have kept twenty or thirty new horses for himself. Unfortunately, in 1853, when he took his brigades out to Fort Vancouver, he found that Chief Factor Peter Skene Ogden had sold fifty of the Fort Colvile horses, for $100 apiece, to the U.S. Army at Fort Vancouver! These were the same horses that, in the early days, the HBC men were used to purchasing for a blanket: by the early 1850’s they could not afford to pay three blankets for these horses. Now they were worth $100 a head, in cash. So fifty head of horses were taken from the Fort Colvile brigades, and because of the sudden shortage of pack-horses, McDonald had to make two trips to bring in his trade goods.

The story of the Saskatchewan horses solved a mystery for me: In The Pathfinder I wrote that Paul Fraser and Alexander Caulfield Anderson argued at Fort Langley in summer 1851. We know this because James Douglas reported:

Fraser as usual promises great things, more I fear than can be reasonably expected from him. He has an unfortunate tongue, which is a never failing source of trouble to himself and all around him. Anderson was very bitter with him at Langley about some reports to his prejudice and was disposed to go to great lengths with him but I advised him to drop the matter and patched up a reconciliation on Fraser’s solemn promise of amendment for the future– which I fear was forgotten as soon as the parties separated.

At the time I thought this argument was about the beating death of Michel Fallardeau, but the dates didn’t match. I think now it was because of the Saskatchewan horses. By 1851 Kamloops had a horse-breeding farm. Fraser, who was in charge of this new farm, heard about the horses and made some sort of comment that Anderson took offense to.

I enjoyed this story, but in the end it got cut out of my book. So here it is, and I share it with you.