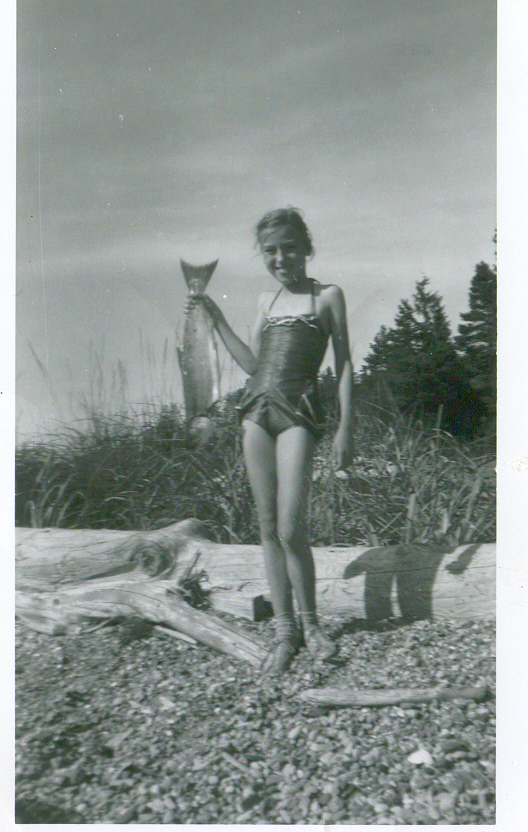 Twelve-year old Nancy with her five-pound salmon, emulating her great-grandfather

Alexander Caulfield Anderson was many things: he was a fur trader; a historian; and a writer. Among historians he is known for his work; and today they read his manuscripts for the historical information those writings contain.

However, Anderson has many different manuscripts, both published and unpublished, for the most part hidden away in the British Columbia archives. and sometimes, in other places as well. It takes years of research to find all his works, and I still have four or more missing manuscripts to find.

So from three manuscripts easily accessible in the British Columbia archives and elsewhere, I have taken his writings about the Salmon, and mashed all the information together to make a completed manuscript. Here it is, as it stands today:

“The Salmon has been since time immemorial the chief, and frequently the sole, dependence of the aboriginal races bordering on the interior of the Coast range, for the sustenance of life. For many years, too, the European traders and their employees, has this resource alone to trust to the staple article of food — eked out, it is true, by various other products in both cases; the beasts of the chase, the minor fisheries, the wild-fowl, and the hare — but still, for their winter dependence, the Salmon was the chief and most valued.

“And here, if in a practical essay such as I am supposed to be engaged upon, I may be permitted to deviate momentarily from the dull monotony of description, I would vain direct the attention of the Reader to the beautiful concatenation of circumstances through which the ascent of the salmon is made practicable.

“From the rising ocean vapors, to their condensation in their interior ranges; the melting of the mountain snows; the consequent rising of the rivers, whereby eddies are formed, and the abruptness of waterfalls, else impracticable to the salmon, is modified — all these circumstances, coincident as they are with the natural causes which impel the shoals of salmon to ascend, compose one more line in the chain of evidences design.

“The various tributaries both of Fraser River and the Columbia, with rare exceptions, are the resort of vast shoals of Salmon at the proper season. Of these exceptions, upon the latter mentioned stream, the Similkameen is one: an effect proceeding apparently from local obstructions to their ascent not far above the junction of the stream with the Okinagan (Okanogan River).

“To these spawning grounds, following the instinct of their race, the various shoals generated originally upon each direct their course with undeviating precision — to those conversant with the habits of the European salmon it is superfluous to mention that each shoal as it ascends strives perseveringly and with unerring instinct to reach, for its spawning-ground, the spot where itself was generated. The natives employ various devices for catching them, according as the stream be clear or turbid; the same means not being generally applicable to both.

“For clearness sake, I shall confine my remarks chiefly to two principal varieties, called by the lower Indians (at Fort Langley) Saw-quai and Suck-kai, by the upper Indians Kase [Chinook] and Ta-lo [Sockeye]; by which latter names I shall distinguish them. The first, equal in size and quality to the large Salmon in Europe, enter the Fraser in May; the latter, a very much smaller and not so rich a fish, arrived a month or so later. In the lower part of the river the natives secure them in large quantities by means of drift nets. Higher up scoop-nets are chiefly used, which are wrought from stages suspended from the rocks bordering on rapid currents; and above Alexandria the Ta-cully [Dakelh] tribe construct ingenious weirs for their capture.

“There are two varieties of the Kase, differing very little in their characteristics, but one shoal, perhaps a little smaller in size, entering the Fraser somewhat earlier than the second; this first shoal, as nearly as I could ascertain, resorts to the West Road River [Blackwater river]. The Kase arrive at the mouth of the Fraser River somewhat earlier than the Ta-lo, in May, and are caught at Alexandria in the beginning of July. The course of the Kase, apart from the minor shoals which may diverge to their native tributaries by the way, may thus be indicated from the Forks of Thle-et-leh [Prince George, BC]. A division of the grand shoal here takes place; one detachment ascending the eastern, or Great Fork, or Tete Jaune Branch, and some individual fish attaining as before stated as far as Tete Jaune’s Cache, where an abrupt overfall debars all further progress.

“The other division strikes up the Stuart’s Lake Branch, as high as the point called the Forks of Chinlac, 60 miles above Thle-et-leh. A further subdivision here takes place; one portion continuing to ascend the Stuart Branch nearly to Stuart’s Lake which, however, they do not enter — instead ceasing at the Rapid a short distance below the issue of the Lake. The other detachment ascends the Fraser Lake branch, and turning off about a mile below the outlet of the lake, continues their course towards the Nechaotin lands, up the river Neja-coh, on which its spawning grounds are situated. This is a stream which on the other hand the Ta-lo do not enter.

“The Ta-lo, its vanguard reaching Thle-et-leh in company with the rearguard of the Kase, strike up the Stuarts Lake Branch, not frequenting the main river heading to Tete Jaune’s Cache. They continue undeviatingly up to the forks of Chinlac, before mentioned, where a separation takes place. They divide; one shoal ascending to Stuart’s Lake, passing through it, and continuing up its chief feeding tributary towards Lake Tat-la. the other division, passing the Naja-coh unnoticed, proceeds directly to Fraser’s Lake; continues through it and pursues its route by the tributary stream issuing at the village of Stella, ascending it towards the Lac des Francaise on the inner verge of the Coast Range, and opposite to the Southern heads of the Skeena.

“It will thus be seen that the laws which govern the ascent of these fish are fixed and undeviating. The knowledge of their habits, therefore, which long experience has taught them, enables the Indians to prepare devices for their capture, in the full certainty that, when the fish do arrive, their preparations will not have been made in vain: in these various devices much ingenuity is displayed, but in different portions of the river, and by different tribes, various methods are practiced.

“Before the salmon enter the Fraser they are readily caught in the adjacent straits and inlets with baited hooks, frequently affixed to long lines fastened to a canoe, which is then paddled briskly through the water. the bait used in this system of trolling is a small fish, or some other substance, even a piece of old cloth.

“The lower Indians of the Fraser use small drift nets which are plied from their canoes. Higher up they erect scaffolds on rocky projections where the current is strong. From these scaffolds bag-nets distended by light frames, nearly similar to the drift-nets, are plied by the fishermen. This system continues as far as the borders of the Ta-cully tribe near Alexandria [just north of Soda Creek, BC].

“The Ta-cully, who are particularly expert in preparing various devices for fishing and the snaring of beasts of chase, construct weirs for catching the Salmon. A close fence of light hurdles, supported by strong stakes driven into the bottom, is projected some forty or fifty feet into the stream, where the current is swift and the bottom gradually shelving. Another fence is run downstream; then at a right angle six feet or so towards the bank, and again upwards nearly to the first transverse fence. The ascending fish thus intercepted in their progress by the upper fence, seek in vain to round the obstacles and, after a while, enter a large cylindrical basket which is sunk at the angle where the descending fence is formed, with slender rods converging inwards like the entrance of a wire mouse-trap. Great numbers are thus caught.

“This is the plan adopted on the mainstream where, as before stated, the water is turbid. In the clear tributaries the submerged basket is not found to answer, except where the stream can be fenced from side to side. Elsewhere the natives substitute an open basket, in the same position as the other but sunk only a few inches below the surface, above which the top of the basket projects. An opening is left in the top of the fence opposite to the basket through which the water rushes. The salmon leap this tiny fall and drop unsuspectingly into the trap prepared for them. At the discharge of Fraser’s and Stuart’s Lake the stream is fenced across, and the sunken basket is used; immense numbers are thus caught in ordinary years. The fence, however, is rarely so secure but that the main portion of the shoal contrives to force a passage, and even admitting it were perfectly close, the natives have an understanding that the fish shall be allowed to pass towards their neighbours further inland, who in turn do not seek to intercept the main body from the spawning grounds.

“The spear cannot be used save in the tributaries when the water is clear. At Alexandria I used to amuse myself at times with the scoop net, and have thus secured fifty or sixty fish in an evening.

“I will now advert to a peculiarity in their fate, which, strange as it may appear, distinguishes the majority from all other known varieties of the genus. There seems to be no question that the shoals resorting to the smaller streams debouching upon the Coast return, after performing their procreative functions, to the sea, as elsewhere. But as regards the main body, resorting to the distant head-waters of those great rivers, it may be incontestably asserted that they never return to the sea. At first incredulous of this asserted fact, subversive of all my preconceptions on the subject, it was only after the observation of years, under circumstances which seem to preclude the possibility of error, that I was constrained to arrive at the same conclusion. Without prolonging my notes by entering on the particulars of these observations, I may confidently repeat the assertion that, the function of spawning over the fish, still struggling upwards, die of exhaustion. Upon the main, or Eastern, branch of the Fraser, which as I have said is frequented only by the large variety of Kase, the strongest of these fish attain as high as Tete Jaune’s Cache between 700 or 800 miles from the sea: there their further progress is arrested by a steep fall. At the foot of this fall, and elsewhere below, the stream swarms in September with dead and dying fish. The once brilliant Salmon, no longer recognizable save from its general form, may here be seen, the function of spawning completed, almost torpid from exhaustion; its nose in many instances worn to the bone, its tail and fins in tatters, nay its very flesh in a state of half-animated decay, either helplessly floating in the eddies or with momentary exertion still struggling to ascend. In no case is the smallest disposition to descend perceptible: its course is still onwards, until dying at last, it floats with myriads of others to be cast upon the beach, attracting to a hideous banquet a multitude of Bears and other carnivorous beasts from the adjacent mountains.”

The first salmon still arrive at Rearguard Falls [Valemont, B.C.] in the headwaters of the Fraser River, in early August. Almost 200 of these amazing fish make it over the falls every year!