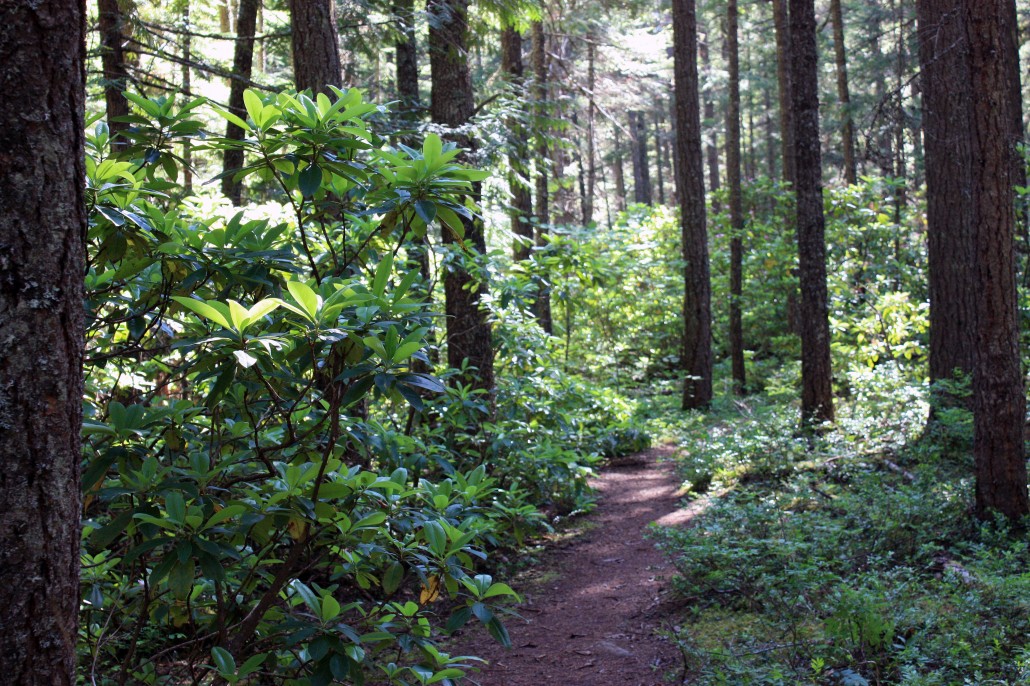 The northernmost grove of California Rhododendron grow wild, under the trees at Rhododendron Flats, Manning Park.

In 1846, Alexander Caulfield Anderson made two explorations across the mountains that separated Kamloops from Fort Langley. In his first expedition, he and his men followed the shores of Seton and Anderson Lakes west to the Lillooet River and finally to Harrison Lake and Fort Langley.

From Fort Langley, the explorers set out in canoes, disembarking at the mouth of the Coquihalla River close where the HBC’s Fort Hope later stood. His Native guides led him up the banks of the river through a broad, thickly wooded valley. Where the Coquihalla River turned sharply northward, another river — the Nicolum — flowed in from the southeast.

The explorers followed the course of the Nicolum up its narrow valley, and walked over two ridges to arrive on the shore of the lake Anderson later named Outram Lake. From there they continued to follow the Sumallo River eastward, and where the stream joined another that flowed in from the south, they met a Native hunter who had crossed the Coquihalla plateau from Thompson River to hunt beaver.

For the next two days the man guided them eastward by a Native track that followed the marshy banks of the Sumallo. Then he showed Anderson a well-marked trail that ascended the Coquihalla from a grove of trees where the wild Rhododendron bloomed.

The stream that Anderson and his men eventually followed to the top of the mountains was the Snass, and the red Rhododendron that they saw at the base of the mountain still bloom at Manning Park’s Rhododendron Flats — one of the few spots in the province where the California Rhododendron grow wild!

Most people would picture these rhododendron growing in bright sunlight (as I did). But the California Rhododendron (Rhododendron macrophyllum) likes shade and cool, dry environments. This plant prefers to grow under trees. In California it grows in the shade of the Redwoods; in Washington State it likes the forests of Douglas fir, cedar or ponderosa pine.

The California Rhododendron is an evergreen shrub that grows in thickets, and each plant is 6 to 12 feet tall with branches that reach toward the sunlight. The leaves are 3 to 6 inches long; the plant blooms in early June and its flowers are a bright, showy pink. 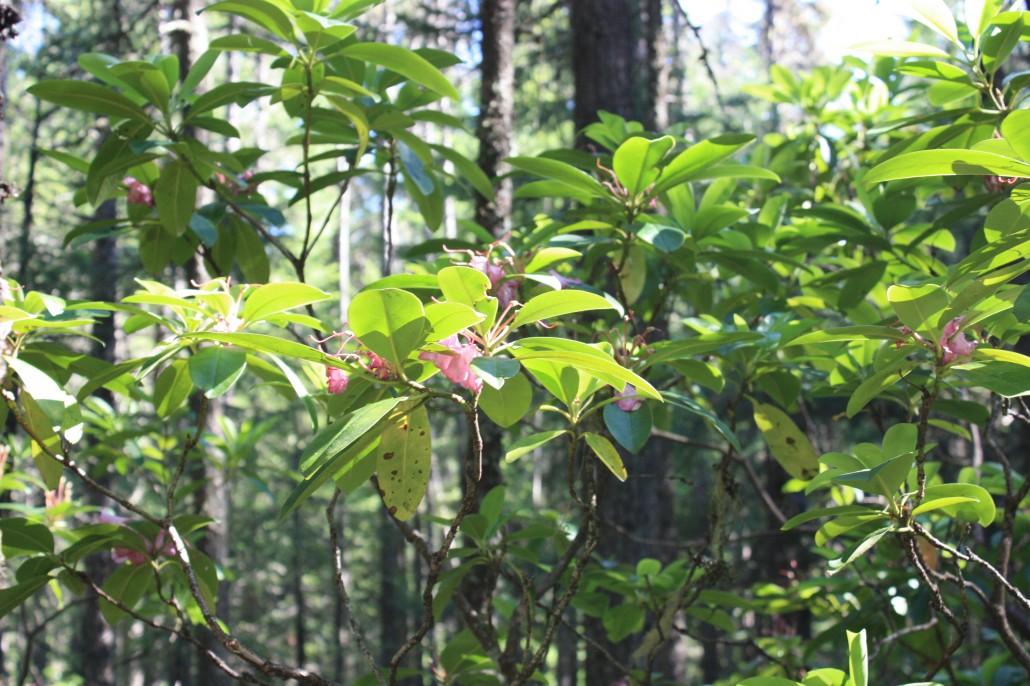 The last blossoms on the California Rhododendron, at Rhododendron Flats, Manning Park, B. C.

Manning Park’s Rhododendron Flats is a quiet place, peaceful and undisturbed. From the parking lot a trail leads through the trees toward the river. It takes a couple of minutes for the walker to realize that the tall, straggling bushes that surround him are the Rhododendron he has come to find. They are everywhere, in tangled thickets or standing alone, either reaching skyward or spreading their branches across the ground in search of a sunny patch. The grove is still and quiet, and the last flowers stick stubbornly to the branches.

Then, from among the trees, a tall, thin man leads a cluster of chattering French-Canadians through the flowering Rhododendrons, looking ahead to find the path that will lead him to the top of the mountain plateau.

For the next post in this series, we will climb the southern edge of the Coquihalla plateau to find the tree that was named Anderson’s Tree. The story is here: https://nancymargueriteanderson.com/andersons-tree/

The story of Alexander Caulfield Anderson’s exploration of this route is told in my first book, The Pathfinder: A.C. Anderson’s Journeys in the West. It seems to be now out of print, but I have some copies of this book left so talk to me if you want one. It will cost you $20 Canadian, plus postage.

My next book is now available. You may order it through my publisher, here: http://ronsdalepress.com/york-factory-express-the/ This book tells the story of the HBC men who journey to Hudson Bay and return every year, in the York Factory Express and the Saskatchewan Brigades.

My third book “The Brigades” will hold many of the stories that were in The Pathfinder. It is, however, waiting for final edits, and so it will be a while before it is published. This will be a closer look at Anderson’s explorations and the history of the brigade trail[s] that resulted from those explorations. Exciting times, starting a new book! I guess my specialty has become (for now) the history of the transportation systems for the Hudson’s Bay Company on the west side of the Rocky Mountains.