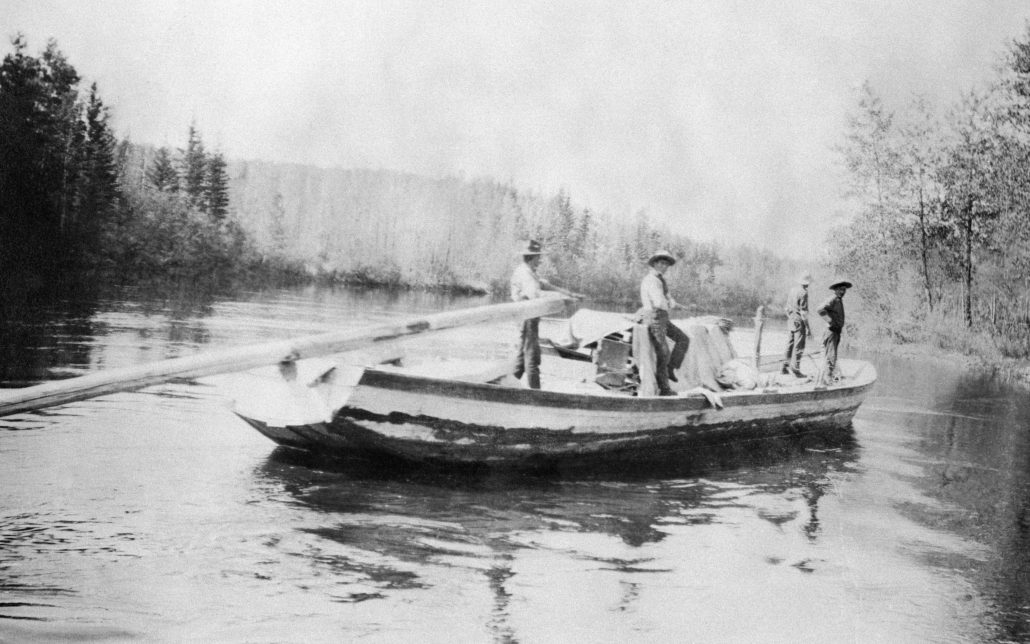 This is one of the truncated boats used on the Athabasca River after 1835. This image, na-1338-20 is used with the permission of Glenbow Archives.

“We remained at Edmonton till the morning of the 6th [October],” Paul Kane wrote, “preparing for the arduous journey which now lay before us.” Paul Kane was travelling west with the incoming York Factory Express, and by this time the Express should be at Jasper’s House and not just leaving Edmonton! I still haven’t discovered why they are running so late in the year, but hopefully I will do so.

Kane’s journal continues with their journey across the Athabasca portage to Fort Assiniboine:

On that morning we started at daybreak. Our party consisted of Mr. Lane and his wife, a young man named Charles, a clerk, who was going to a post on the west side of the Rocky Mountains, a person of the name of McGillivray, and sixteen men.

These two clerks were John Charles, and Montrose McGillivray. John Charles is featured in The York Factory Express, as he took out the 1849 Express to Hudson Bay and did not return home. He was Métis, and his father, also named John Charles, had been a Chief Factor in the Athabasca District, at Oxford House, and at York Factory. John Charles’s older brother was Thomas Charles, who worked at Fort Alexandria under my great-grandfather Alexander Caulfield Anderson. Charles’s younger brother was named William Charles, and he wed a daughter of my great-great grandfather James Birnie and so is in my family tree.

Montrose McGillivray is also Métis, and he worked for my great-grandfather, Alexander Caulfield Anderson, at Fort Alexandria. His story is told in this blogpost: https://nancymargueriteanderson.com/fabulous-montrose/ As you can see, he is a favourite of mine. Well, they both are, actually. John Charles’s story begins here, and the story will be completed when the book is published: https://nancymargueriteanderson.com/john-charles/

But we are talking about Paul Kane’s journey, and his story continues here:

We had with us sixty-five horses to carry our baggage and provisions. This seems a large supply of horses for so small a party; but it must be taken into consideration that Edmonton is the last post at which we could get a supply of provisions on this side of the mountains; so that we were necessarily obliged to carry a large quantity with us, owing to the difficulty which always arises in getting the men away from comfortable quarters to commence a long and difficult journey, coupled with the wildness of the horses on the first day’s march. We only succeeded in reaching Sturgeon Creek, a distance of about sixteen miles, on the first day. Seeing a group of buffaloes reposing near a small lake, I took a sketch. They were the last that I should see for some time, and it was easy for me to keep up with the party at the slow rate at which they proceeded.

October 7th — The prairies were now fast receding behind us, our course lying to the northward. The track became almost impassable, being wet and swampy; and the horses often stuck fast, and threw off their loads in their struggles to extricate themselves from the mire…

So it does not appear that the Athabasca Portage got easier over the years — the men just stopped complaining about it! But I did not know that they carried so much in the way of provisions across the Portage, altho’ of course they must have done. The reason that Paul Kane gives is very interesting. His journal continues:

October 8th — The tremendous hurricane above alluded to [on the night of their arrival at Edmonton] had torn up immense trees by the roots, and scattered them in piles one on another in all directions, detaining us sometimes for hours, while the men cut a path through them for the horses. Our progress through the thick woods, which we had now fairly entered, was necessarily very slow and fatiguing.

October 9th — The Track still continued bad, and we saw no game; so that our time passed very monotonously, as we had to keep pace with the loaded horses. A Highlander of the name of Colin Frazer had joined our party. He was on his way to a small post, of which he had the charge, at the head of the Athabasca River, in the Rocky Mountains, where he had resided for the last eleven years.

As we know, this is Colin Fraser, who was once Governor Simpson’s official bagpiper, as you will see the the “Two Canoes” thread. He also appears regularly in the various York Factory Express journals in the 1840s. In 1841, George Traill Allan writes of his arrival at Jasper’s House from the West, where the received “a regular Highland welcome from the person in charge, Colin Fraser, formerly Piper to Governor Simpson, but now promoted to the charge of Jasper’s House.” Kane’s journal continues:

October 10th — I left the party this morning and proceeded on, and at two o’clock in the afternoon, after a smart ride, I arrived at Fort Assiniboine, on the Athabasca River. This establishment, although honoured with the name of a fort, is a mere post used for taking care of horses, a common man or horse-keeper being in charge of it. The rest of the party arrived late the same evening.

So, they are now at Fort Assiniboine, and the next part of their journey will bring them in boats up the river toward Jasper’s House. I will begin this part of the journey, but its unlikely we will make it all the way to Jasper before I end this blogpost. So, here we go, in Paul Kane’s words!

October 11th — We found two boats here, which our men immediately overhauled and set to work to repair and pitch. At 2 o’clock p.m. we embarked, and continued travelling slowly on, against a very strong current, for five days. The water was very low, which added greatly to our difficulties. We saw no game nor Indians to break the monotony of our labour, and the nights and morning were becoming very cold.

It was late in the year: October, in fact. It is generally a ten-day journey upriver to Jasper’s House.

October 15th —  When we stopped to take breakfast it was very cold and snowing. We held a council, and it was determined that, as the weather had set in so bad, five men and one boat, with the clerk [John] Charles, should return back to Fort Assiniboine with the Russian packs of Otter skins. We were now all obliged to crowd into one boat, the others having gone back; and were frequently obliged to disembark and lighten the boat, owing to the unusual lowness of the river. We had almost continually to drag the boat onwards with a line, the men waist deep in the water. One of them slipped off a log into deep water, and it was with no small difficulty we saved him from being drowned. We had not extricated him from the river five minutes before his clothes were stiff with ice. I asked him if he was not cold, and his reply was characteristic of the hardihood of the Iroquois, of which tribe our party principally consisted, “My clothes are cold, but I am not.”

So it sounds as if the tough, strong, and hardy Iroquois boutes continued with the boats, while others who were not Iroquois were sent back to Fort Assiniboine. I think that everyone in the HBC fur trade recognized that there was no one person in the HBC Express that was tougher than an Iroquois man! Kane’s journal continues:

October 16th — The weather had now set in so cold that we began to doubt the possibility of crossing the mountains this season. The line by which the men dragged the boat broke twice today in the rapids, and our boat was nearly dashed to pieces among the rocks. Had this misfortune happened, we should have lost all our provisions, and had a great chance of perishing with hunger.

October 17th and 18th — Weather fine. This is the most monotonous river that ever I have met with in my travels. Nothing but point after point appearing, all thickly covered with pine, any extensive view being entirely out of the question. . .

They met a First Nations hunter and Colin Fraser traded for a canoe which would take him and four other men upriver to Jasper’s House, therefore lightening the load in the boat. On October 20 and 21, the Express men continued their journey with almost no comment from Paul Kane. On October 22 they dined on bear cubs left by Colin Fraser, and on October 23 they passed a campfire that was still burning, “left by Frazer the night previously.” They were not that far behind him. On October 24 they passed “the Rapids de Mort, where the men had great difficulty in getting the boat up; we, of course, had all to walk.” Then:

A small bag of pemmican made in the usual way, except that it contained Saskatoon berries, was stolen, and a search being made for its recovery, a part of it was found in one of the men’s bags. The only temptation to the theft could have been that it was more palatable than his own.

It was usual that the gentlemen’s pemmican was made with berries, while the men’s was not. The men’s was also coarser: so you can’t really blame any voyageur who wanted to dine on better food when it was available. But:

[Montrose] McGillivray, being one of the most powerful men of the party, was called upon to administer the punishment, which he did by repeatedly knocking the delinquent down. This severity of punishment was called for by the fact, that the most disastrous consequences might arise on a journey through these desolate regions, if the most rigid care were not taken of the provisions.

A modern-day descendent of John Lee Lewes was worried by his ancestor’s method of punishing one of his men who had deserted, by knocking him down over and over again until he could no longer rise. It is a violent, but common way of punishing the men who deserted (in Lewes’s case), or who stole food, as in this case. It was necessary. And interestingly, in my book, The York Factory Express, there is an example of this punishment inflicted on one man, who set aside a load of pemmican to save himself from carrying it. The remaining party almost did not make it to safety because of the resulting shortage of food. It was important that the provisions were kept for everyone’s consumption, and were not consumed, or lost, by one man.

I think I will leave this post here, and continue it in the next post which will be here when published: https://nancymargueriteanderson.com/paul-kane-6/

If you want to go back to the start of the journey at Norway House, go here: https://nancymargueriteanderson.com/paul-kane/