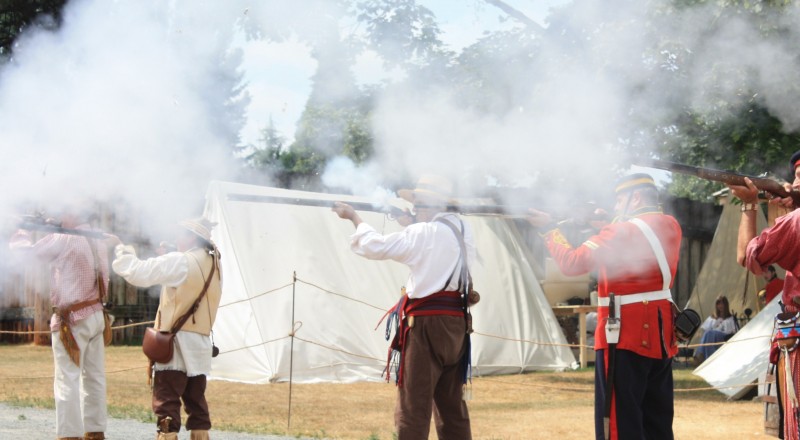 Flintlock Guns — what better thing was there to do on a quiet New Year’s Day, than to go outside and shoot at targets, with flintlock guns, as these men are doing! Happy New Year, everyone.

Thomas Lowe arrived at Fort Vancouver, from Fort Victoria, in June 1843, and unfortunately his journal ended for that year on October 1, when “Rev. Jason Lee preached to us in the Hall.” It picks up again in June 1844, and those dates suggest to me that the Fort Vancouver store ran out of the memorandum books he used as his journals, and he was only able to obtain a new one when the annual London Ship unloaded its goods at Fort Vancouver.

So, 1844: December started out with heavy showers of rain — typical west coast weather. On December 23 it rained all day. On the 24th the men got their Regale in the afternoon, and Father [Père John] Nobili celebrated Mass at midnight in the Catholic Church. The 25th was Christmas Day, of course, and everyone had a “holyday,” and went out shooting. In the evening there was a card-party in Dr. John McLoughlin’s room, with a supper afterwards. And a week later, on December 31, Lowe reports on the New Year celebrations:

The people engaged erecting a new Belfry, the Bell of which was placed in a large cask of Salt in order to preserve it from decay. It is placed behind the small Granary, near the North pickets. This being the last day of the year, the men got a regale of beef and flour, also a half pint of Rum. Heavy rain all day.

1845, January 1st. Raining in the forenoon. After dinner took a ride to the Lower Plain. We had a ball in the evening upstairs, which was kept up till 2 o’clock next morning. Men comparatively quiet.

Christmas 1845 was again quiet: the men got their regale on December 24, and Lowe “dined with the gun-room officers on board of the [HMS] Modeste,” which was visiting Fort Vancouver at this time. And on December 25, “A holiday of course to all hands. I went out shooting in the forenoon to the Lower Plain. Dined at the Fort and rode out afterwards. We were all invited on board the Modeste to see the splendid manner in which the ship’s company had decorated her, and the Christmas feast that the table groaned under. Many of the ladies and gentlemen of the fort went — I did not.” But on December 31st, Lowe says:

Singing, dancing, and all kinds of fun carried on to the late or rather early hour in Bachelor’s Hall, ushering in the New Year. Several of the Junior officers from the Modeste and a number of the other visitors were with us.

1846, January 1st. A holiday of course. More preaching in the evening. Visited all the ladies in the Fort to wish them a Happy New Year and many returns. A dance in the evening in the large Mess Hall, at which all the ladies were present. Everything went on pleasantly until about 10 when some of the Officers of the Modeste (who had been dining) began to drop in and there was then rather too much noise to be altogether pleasant. However, it passed off well.

So, now Christmas 1846 and New Year, 1847: On December 24, now-retired James Birnie arrived at the fort with all his daughters (as you know, Thomas Lowe married one of Birnie’s daughters). The men had their regale served out to them in the afternoon. On Christmas Day there was “a holyday to all hands,” but Lowe reported that it rained heavily and they were unable to have any out of door amusements, in consequence of which they had “rather a dull time of it.” On New Year, however:

Mr [Richard] Lane had a party in his house consisting of the Miss Birnies and some of the other ladies of the Fort, where we spent a very agreeable evening and sat up to welcome in the New Year.

January 1st, 1847. Rainy disagreeable weather, and although there was no work to be done, we could not enjoy ourselves outside. Had a very excellent dinner at the Fort, but none of the Officers of the Modeste were present, as they all dined on board. In the evening we had a splendid Ball up in the Hall, which went off remarkably well, and was kept up until 3 o’clock in the morning, after which we sat down to super. Most of the officers of the Modeste were at the Ball, and all the Ladies of the Fort.

Christmas 1847, and New Year, 1848: This year was different from all the others that preceded it. As you know if you read The York Factory Express, the great measles epidemic changed the history of the territory, and inflicted great damage on the First Nations and Métis people who lived at and around Fort Vancouver. Many died. As Thomas Lowe wrote, in 1847-48 there was so much sickness in the Fort that “we had no amusement during the day, and in the evening had only a wearisome card party.” Was New Year any better? It was quiet, and they had a very pleasant party on New Year’s Eve. And on New Year’s Day:

Being New Year’s Day this was of course a holyday, and as luck would have it the weather kept fair, but the only way w could enjoy ourselves was taking our guns and pistols and firing at a target. In the evening Mr. [Archibald] McKinlay and Mr. Thomas McKay arrived from Oregon City. Card party at Mr. Lane’s.

And Christmas 1848, and New Year 1849: Well, Lowe kept no journal for that time, and so we do not know what happened. But he did have a journal for 1849, and he did celebrate both Christmas and New Year at Fort Vancouver. Here is what he had to say of his Christmas: “Beautiful day. Went the rounds wishing my friends a Merry Christmas and many returns of the day. Dined at the Fort at 3 o’clock, and afterwards dined at the Mess of the Artillery Officers at 5 o’clock, with some others from the Fort. They gave us a temperance or rather total abstinence dinner, which none of us relished much. Made up for it however, on our return home.” As you see, things have changed again. The Modeste has sailed for England, and the American Army now has its fort on the hill behind the HBC’s Fort Vancouver.

Fine weather. Made several calls in course of the day, wishing my friends the compliments of the season. Dined at 3 o’clock, and several of the Artillery Officers were present. The dinner was kept up until rather an unusual hour for this place, and one or two of the officers indulged pretty freely. Had a whist party in Dr. [Forbes] Barclay’s room in the evening.

At this time, Thomas Lowe was making plans to leave the HBC, and he may have already been married to LaRose Birnie, the daughter of James Birnie. His future was to be at Cathlamet, where he had purchased a piece of property. Did he have many Happy New Years with his new wife? No, she died almost immediately, and I don’t think Thomas Lowe was ever happy again.

I did not mean to end this post on a sad note. Anyway, I hope you had a Happy Christmas, and that you will also enjoy your New Year celebrations, and that 2023 will be a better year for everyone.