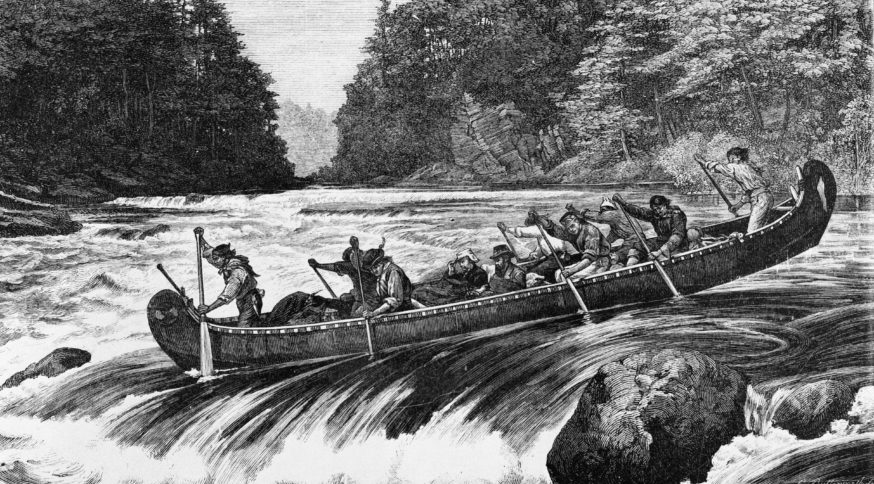 The year is 1855, and James Anderson and his party of men, which includes James Green Stewart, have paddled down the Back, or Great Fish River. On August 1 they reached a small islet next to Montreal Island, which is located in the deep inlet into which the Great Fish River flows into the Arctic Ocean. This inlet is Chantrey Inlet. They have come to Chantry Inlet and Montreal Island with a specific duty in mind: they will search for journals and papers of Sir John Franklin’s lost men. Anderson and Stewart will begin their search on Montreal Island, just west of their campsite. This is the place where some Inuit men told Chief Factor John Rae of the “kabloonans,” or white men, that had been spotted there some four years earlier.

There was, of course, no chance at all that these men would have survived four long, cold Arctic winters, and Rae knew already from the Inuit that the kabloonans were long dead. They were on the shores of the Arctic Ocean, after all, and from the description of the place Rae understood that that were seen on or near Montreal Island, in  Chantrey Inlet. So, where is Montreal Island?

First, let’s establish where Chantrey Inlet is. It is a “bottle-shaped” inlet (narrow neck, wider bottom) that reaches deep into the Arctic mainland of the North American continent, its relatively narrow mouth lying between Point Pechell, on the Adelaide Peninsula, and Cape Britannia, part of the Boothia Peninsula. Down the east side of Chantrey Inlet are, from north to south, Point Beaufort, Point Backhouse, and Victoria Headland, just north of the mouth of the Great Fish River. South of Point Pechell, on the west side of Chantry Inlet (from north to south), are Montreal Island and its collection of small nearby islands, and Elliott’s Bay. At the base of the Chantrey Inlet is the mouth of the Great Fish River (also known as Back’s River, and the Thlewycho). At the north end of Chantrey Inlet and to the north-east, is the rest of Boothia Peninsula, which juts out into the Arctic Ocean from the mainland of the North American continent, and to the north-west is Adelaide Peninsula, which has two sharp points (Point Ogle, and Point Richardson), both jutting northward into the Arctic Ocean. North of Point Richardson, and across Simpson Strait from the top of the Adelaide Peninsula, is King William Island, often in those days called King William’s Land. (In 1854, John Rae’s exploration determined that King William’s Land was actually an island).

So now that we know where we are….

As you know from the last blogpost in this series, the two canoes that were under James Anderson’s command left the mouth of the Great Fish River and followed the east shore of Chantrey Inlet northward, passing Victoria Headland (where they noticed the tide), and Point Backhouse. They set up camp that night at Point Beaufort, almost directly across Chantrey Inlet from Montreal Island. They took the traverse of Montreal Island on August 1, but did not quite reach it. “We are encamped on the N. side of a rocky island divided by a channel from Montreal Island,” Anderson wrote in his journal.

On Thursday, August 2, 1855, they reached Montreal Island, and Anderson wrote in his journal:

The men breakfasted early and left to explore the Island. At mid-day we heard shots and left immediately with Mr. [James Green] Stewart. We met Buché and Reid, who showed us sundry articles belonging to a boat, and a chip of wood with “Erebus” [“Terror”] upon it.

Buché is Joseph Boucher, a Canadian, and the cook on the expedition. It is he that “broke” the story that I am not telling you (sorry), and he did it, forty years later, by telling a prominent historian and geographer of “the hardships they went through, and of the agony they suffered through fear that they would never again be brought back to their homes.” The second man was William Reid, an Orkneyman. Both were middlemen on this expedition: they were strong paddlers and experienced canoe-men, but were neither bowsmen nor steersmen.

I promised a follower that I would tell you the names of the men on this expedition, so here we go. There were fourteen men here on Montreal Island, not including James Anderson and James Green Stewart. This was a very experienced group of men: the bowsmen were all Iroquois from Norway House or Red River. These experienced bowsmen were: Baptiste Assaminton [Assinijunton, or Accusation]; Ignace Montour, and Joseph Anarin (sometimes Anarize).

The steersman were: Thomas Mustagen (sometimes Mistegan), Muskegon/Cree and chief of the Ojibway First Nations at Norway House; described as a splendid man, physically strong even in his old age. John Fidler was Métis, from Red River. My favourite of all these men is Paulet Pananakies, a Muskegon/Cree and Ojibway from Norway House. Pananakies was a quiet, deliberate man and an experienced river man who had been to York Factory many times. He was praised, particularly, for his eyesight.

Another steersman mentioned in Anderson’s journals is Alfred Laferté, at first described as one of Anderson’s best men. But by the time they had reached the headwaters of the Great Fish River, Anderson changed his mind about Laferté: he considered him a troublemaker, and as a result Laferté was sent back to to Great Slave Lake. He was almost certainly Métis from Red River.

The middlemen were also experienced river men, and four of them had been with Chief Factor John Rae on his expedition of 1854, which meant they understood a few words of Inuktitut [the Inuit language]. Three of these men were: Henry and John Fidler, brothers and grandsons of HBC surveyor Peter Fidler [John Fidler has already been mentioned above as steersman]; and Murdock McLellan, a highlander born in Orkney. The fourth was Thomas Mustegan, the steersman of Anderson’s canoe mentioned above.

Murdock McLellan was described as an active, steady man, and a good boatman. Jeremiah Johnson was, like Thomas Mustagen, a Muskegeon/Cree from Norway House. Other Métis from Red River who served on this expedition were: Ham Fisher, Edward Kipling, Donald McLeod, and George Daniel.

So these are the men who have arrived on Montreal Island in early August 1855. James Anderson’s journal continues: “We then proceeded to the point” of Montreal Island, where they “examined all the Esquimaux caches, most of which contained blubber and seal oil.” But one contained a tin kettle and sundry iron works and other items that can only have come from a ship, “and a piece of wood with “Mr. Stanley” cut on it (surgeon of the Erebus).” His journal continued:

The search was continued till late in the evening, but no traces of the graves were discovered. A band of 10 deer were on the Island, of which 5 were killed — 2 by E[dward] Kippling, 1, D[onald] McLeod, 1, J[eremiah] Johnson and 1, J[ohn] Fidler; all fat Bucks. Our best hunter, [Thomas] Mustagen, is lame. The day was beautiful and we had an opportunity of drying everything, which was sadly needed. The whole inlet is full of ice except to the eastward, where there appears to be some water…

Friday 3d… All hands searching for the graves but without success. A few trifling articles belonging to the Ships found. Some of the adjoining islands were also examined… [oh, that’s interesting — I might have missed something here]. The inlet is choked with ice except along the east shore.

Now it is time to get off Montreal Island, but Chantrey Inlet is filled with floating ice, especially along the western shore where they were actually trying to make their traverse to the Adelaide Peninsula. Being the Arctic Ocean, this was tidal water, and the ice would float into Chantrey Inlet and Elliott’s Bay with the incoming tide, and float out with the outgoing. The ice was broken but the floes were pressed tightly together, and the ice-bound waters made it difficult for them to leave Montreal Island for the Adelaide Peninsula.

Saturday 4th. Wind moderate, varying between N.W. and N.E., clear fine day. As the whole island is completely explored I made an attempt to get over to the Western mainland but could not succeed. We worked along shore through the ice along the western end of Montreal Island till we came to nearly the northwest part for crossing. The whole inlet appears to be still blocked with ice, we can do no more till the ice is driven out…

Sunday 5th [August, 1855]. Montreal Island. We worked through the ice to the western shore and all hands were employed in exploring the Western shore to the southward and northward, but few traces of the missing party were found.

He and his men have managed to make their way from Montreal Island to the eastern shoreline of the Adelaide Peninsula (or the Western shore of Chantrey Inlet). They are at this point still travelling in the two birch-bark canoes that they came down the Great Fish River in — but they have a third boat that they are carrying with them. It is a Halkett boat: the same Halkett boat that Chief Factor John Rae had used on his recent Arctic expeditions. This inflatable craft was specifically designed for Arctic travel, and was made of a rubber-impregnated fabric. This boat was designed and built by Lt. Peter Halkett in the 1840s, and Anderson speaks of this boat for the first time on August 8. “Early this morning 4 of the best men were ferried across in the Halkett boat and the whole of Maconochie’s Island was minutely examined without success….”

But we are getting ahead of ourselves.

So we have now explored Montreal Island, although James Anderson and his men will come back to visit this same island on his way back to Great Slave Lake. As you see, this will be a long series! To begin at the beginning of this series, go here: https://nancymargueriteanderson.com/james-andersons-journey/

When the next post in this series is published, it will appear here: https://nancymargueriteanderson.com/adelaide-peninsula/

2 thoughts on “Anderson on Montreal Island”