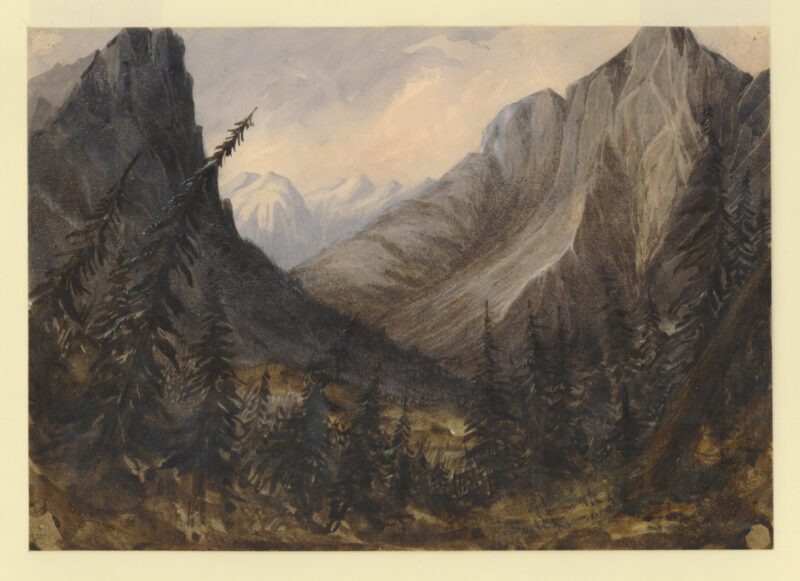 This is a painting by Henry James Warre, unidentified location. Courtesy American Antiquarian Society. It is highly likely that this is Athabasca Pass, possibly as seen from the west. It could literally also be drawn in the pass, at the lakes. What do you think?

I have one man I keep stumbling across: his name is John O’Brien. I found him first when he was mentioned in Thomas Lowe’s York Factory Express journal of 1847. Lowe writes:

Thursday 15th July 1847. Started from York Factory at 11 am with 2 boats, in one of which is C.F. Rowand and Mr. O’Brien, and in the other Mr. Ferdinand McKenzie & myself, passengers… Mr. Rowand retires this year to Canada. [He didn’t]. Mr. O’Brien is for McKenzie’s River, and Mr. McKenzie accompanies me to the Columbia. Warm day. Fine breezes up the [Hayes] River.

I don’t think he was spoken of again in Lowe’s journals, but in order to identify him (as I attempted to identify everyone mentioned), I looked in the various biographies on HBCA and in other places, and did not find him. So I wrote him off as a spear-thrower. If you are a writer, you know what that means: the person is so unimportant to the story that he is just another character in it and there is no need to make him more important than he is. He is one of the men who throws the spears in battle.

Then I found John O’Brien’s biography in The Letters of John McLoughlin from Fort Vancouver to the Governor and Committee, Second Series, 1839-44. And here it is, in stages:

John O’Brien came from London and was engaged by the Hudson’s Bay Company as an apprentice clerk for the Montreal Department in January, 1833, when he was fifteen years of age. He sailed from the London Docks for North America on the Great Britain, and after a short time spent in the Lachine office he was sent to the Timiskaming district, where he was employed for about two years. In 1835 he was transferred to the Lake Huron district, and he served there until 1840, when he volunteered for service in the Columbia district. In his own words … his journey “without interruption from Lake Huron to the most distant Post on the North West Coast of America…occupied… from May until February [1841]. At this Post ‘Tako’ he was subjected to considerable peril & fatigue…”

So he was at Fort Durham, built on the northwest coast in June 1840. John O’Brien went to Fort Durham in 1841, to replace Roderick Finlayson who was transferred out, and he was in turn replaced by Thomas Lowe in 1842. His biography continues:

He gave notice of his intention to retire when Sir George Simpson was at Taku in the autumn of 1841, and in the spring of 1842 he was sent to Fort Vancouver, preparatory to returning to England. O’Brien was employed there for a time in the counting-house, and he was a member of Douglas’s party which explored the southern end of Vancouver Island in the first part of the summer of 1842.

And so he is also in my stories about the founding of Fort Victoria! He seems to be everywhere!

He was also with Donald Manson on the Coast during the enquiries into the murder of young McLoughlin [at Fort Stikine]. O’Brien apparently changed his mind about retiring and McLoughlin recommended that he should be allowed to remain in the service. He wintered at Fort Vancouver in 1842-43, and on the instructions from Simpson and the Council of the Northern Department, who were of the opinion that resignations “should be considered binding,” he left for York Factory in the spring of 1843. He carried the Columbia express to Red River and York Factory, and he afterwards claimed that the hardships endured on his journey “affected his eyesight &  he experienced intermittent blindness from June to November and continued deafness for a considerable period…”

So it is likely that John O’Brien led out the 1843 York Factory Express. His story continues:

O’Brien returned to England from York Factory on the Company’s ship Prince Rupert, but after being away so long he found it difficult to obtain employment in London, and so applied in February, 1845, for re-admission into the Company’s service. He was reappointed a clerk on a five years’ contract…

He turned that position down, but on re-applying he was again appointed a clerk in June 1846, with a contract that offered better terms.

He sailed for Hudson Bay in the summer of 1846, and his first duty on arriving at York Factory was to conduct the second brigade of the 6th Regiment of Foot (which had been sent out to Ruperts Land by H.M. Government pending the settlement of the Oregon Boundary) to their station at the Red River Settlement. He then proceeded to Edmonton House, where he wintered during 1846-47. He accompanied Chief Factor John Rowand and the Saskatchewan Brigade to York Factory in the spring of 1847, and then, according to his “Memorial,” returned to Edmonton House in charge of the brigade.

As you see from Thomas Lowe’s comments, above, John Rowand was there and presumably in charge of the brigade. Perhaps Rowand was supposed to retire and chose not to, and John O’Brien went out thinking he would be in charge on its return journey. Lowe, however, says that John O’Brien is “a passenger.” O’Brien’s story continues:

At the end of September he and his party started for Mackenzie River, the district in which he had been appointed for outfit 1847-48. He got as far as Peace River on October 25, and finding it already full of drift ice and impossible to navigate in a frail bark canoe, he decided to return to Edmonton. He left Edmonton in March, 1848, on snowshoes and arrived in the Mackenzie River district late in the following June. He had charge of Fort Simpson until the return of the brigade from Portage la Loche at the end of August, when “he was dispatched to the most barren region in the Country… to assume charge of Frances Lake & Pelly Banks Posts.”

I did run into John O’Brien in the Mackenzie District when I was writing my yet-to-be-published “Journeys” book. I did not pay a lot of attention to him, because even there, John O’Brien is little more than a spear-thrower. Here is how he is written up in the book by Theodore J. Karamanski, Fur Trade and Exploration: Opening the far Northwest, 1821-1853 [University of British Columbia Press, 1983]:

It was some time before [Robert] Campbell and his men heard of the change of command. They were dependent upon the Pelly Banks and Frances Lake posts to relay supplies and communications. Campbell had no faith in either Pierre Pambrun, Jr., or John O’Brien, the clerks responsible for those posts. His opinion was confirmed in September 1848, when Campbell sent James Stewart to Frances Lake for the winter’s trade outfit. Stewart found both Frances Lake and Pelly Banks in a state of confusion. The supply boats from Fort Simpson had been late, and the men had suffered from hunger. By the time things were straightened out ice was beginning to form on the Pelly River, and Stewart was unable to forward his trade goods to Fort Selkirk.

This is the rest of John O’Brien’s story, from the same source as above:

The winter of 1848-49 was one of great privation at Frances Lake, and O’Briens party also suffered on the journey to Fort Simpson with the returns of trade in May, 1849. On arrival there he was directed by the Chief Factor in charge of the district to wind up the season’s business and conduct the brigade to Portage la Loche. He was again appointed to Frances Lake and Pelly River for outfit 1849-50, but…he became so ill in body and mind whilst en route to his charge, that on this account and owing to troubles with deserting Indians and an incompetent guide, he returned to Fort Simpson.

Robert Campbell (of Fort Selkirk fame) tells the story of what happened in his various journals. James Green Stewart and Andrew Flett waited for the boats until it was far too late in the year, and were almost skeletons by the time they made it back to Fort Selkirk, “The cause of all this disappointment & suffering was they waited at Frances Lake in vain for the boats till near the close of navigation, then seeing that further delay was useless, they crossed to Pelly Banks without provisions.” At the Pelly Banks post they found the men in confusion, with no provisions laid by to carry them over the winter. Stewart and Flett lived from hand to mouth as they made their way downriver to Fort Selkirk, “& made up their minds to lie down and die when they came on the caches I had caused to be made.”

What happened to John O’Brien, you may ask? He never saw the Frances Lake post again. “He spent the winter of 1849-50 in charge of Fort des Liards. Simpson was displeased with O’Brien’s conduct as he considered that the return to Fort Simpson in the fall of 1849 had been made “without any good reason for so doing & without … due efforts to accomplish the journey,” and he considered that the consequences would “be attended with privations to the Company’s Servants & the Indians & with great injury to the trade.” This is true: two HBC men starved to death that winter, and one cannibalized the other. Two more men barely survived the winter, and were taken out to Fort Simpson to recover their health.

John O’Brien was appointed a clerk at Fort Simpson for outfit 1850-51, and as his contract expired on June 1, 1851, Simpson arranged for him to accompany the Portage la Loche brigade to York Factory in the summer of 1851, and there take the Company’s ship to England, as it was not intended to renew his contract. His account in the Company’s ledge was closed On October 10, 1851, and his further efforts to rejoin the Company’s service were unsuccessful.”

So, if you want to purchase my newly published book, you can do so here: http://ronsdalepress.com/york-factory-express-the/ John O’Brien might be mentioned in the book, so don’t look for him there. Fortunately for you, you will learn about the York Factory Express that he travelled in — this is how he came into the territory west of the Rockies, and how he travelled out.