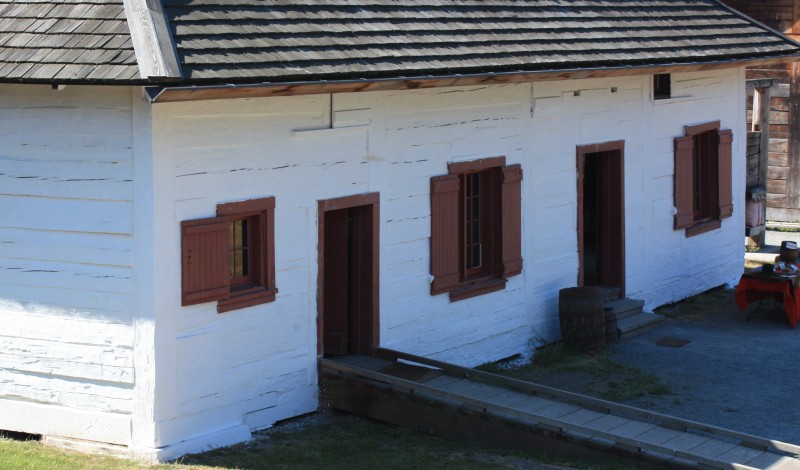 Fort Vancouver’s Chief Factor, John McLoughlin, had little to do with the building of Fort Victoria, and nothing at all to do with its management, in spite of the fact that he was in charge of Fort Vancouver and that Fort Victoria was built by men from that place. This first post, part of a series, is the beginning of how that all came about, and it will more or less cover what happened in the year 1841.

As we know from earlier blogposts, in 1841 Governor George Simpson visited the northwest coast posts and then returned to Fort Vancouver late in October of the same year, where Chief Factor John McLoughlin learned, “to his dismay that Simpson had decided on a complete reorganization of the coastal trade.” This information, and that quote, came from E.E. Rich, editor, The Letters of John McLoughlin from Fort Vancouver to the Governor and Committee, Second Series, 1839-1841 [London: Hudsons Bay Record Society, 1943]. In Simpson’s view, the deal with the Russian American Company (a Russian-owned fur trading company in what is now the Alaska Panhandle) had completely changed what was needed by the Hudson’s Bay Company. Even before this deal was signed there was no longer competition from the Americans on the coast: the “Boston” ships had completely disappeared. The Russian deal also ended all competition between the Russians and the HBC. With no more competition on the coast, there was no need for John McLoughlin’s many posts: Fort McLoughlin, Fort Simpson, Fort Durham, and Fort Stikine (the latter of which had come into HBC hands with the signing of the Russian deal).

Governor Simpson had visited the coast to re-organize it, now that the deal was signed. He visited every post (except Fort Stikine) twice, and on the completion of his visits he decided that trading operations would now amount to little more than the periodical collection of furs at the various trading hotspots up and down the coast. Simpson decided to close down almost the posts except for Fort Simpson, which would then serve as a northern supply depot. This post would store trade goods dropped off by the London Ships every summer, for pickup by the steamer Beaver, and it would store the furs collected on the coast by the Steamer Beaver until the London ship picked them up the summer following. Fort Stikine remained open as well, for now, as it was newly assigned to the HBC, but Governor Simpson intended that it, too, would eventually be closed down.

On his return to Fort Vancouver in October, Simpson informed John McLoughlin of his plans for the northwest coast posts. John McLoughlin was, naturally, horrified: he was losing all the posts that he had so carefully set up over the years. He felt betrayed, both by Governor Simpson, but also by his own chief traders who knew of the plans but did not inform him. He felt he was left out of the decision-making process; that the plans to close down HIS posts were made in secret and behind his back — and, of course, they were: but John McLoughlin had made the decision to not come north with Simpson, and so could not attend the meetings that John Work, of Fort Simpson; Captain William H. McNeill, of the Beaver; and James Douglas, second-in-command at Fort Vancouver, attended. It is possible that Chief Trader Charles Ross, of Fort McLoughlin, had also been part of the discussions that went on. It is also clear that all these men knew of Simpson’s plans long before John McLoughlin himself heard of them: it is less clear, however, whether or not these men fully agreed to Simpson’s plans when they were in front of him, but disagreed behind his back — and as you will see below, when they had time to consider those plans, they might not have fully agreed with him.

But that would not have changed Simpson’s mind at all: agreement was not necessary. Simpson reported to the London Committee in a letter written at Fort Vancouver in November 1841, wherein he said that the trade of the coast could not profitably support so many establishments, along with the shipping required for the transport of supplies and men. Closing down Fort McLoughlin, Durham, and Stikine, would not injure the trade, in Simpson’s eyes. Under Simpson’s new arrangement, the Steamer Beaver would be kept busy visiting all the familiar trading hotspots at stated times, up to six times a year! He also argued that manning and maintaining the forts was expensive: and that the cost of running the Beaver was a fixed cost, which meant that the cost of running the Steamer would not increase proportionately to the numbers of furs it collected up and down the coast. And should the Beaver break down or somehow meet with an accident, there were always the sailing ships to replace her, temporarily at least.

to me, his feelings appear perfectly natural and pretty much the same as would be excited in the mind of any other person in such circumstances: the slashing paragraphs in your report, denouncing abuses on shore and afloat, gave him inexpressible pain, as they were so many indirect attacks on his management, and he lost thereby, in the exact ration that you acquired merit. In some points of that sort, your remarks were rather severe.

To make matters worse, Simpson brought up the long-standing argument about the building of a new depot, or headquarters, on Vancouver’s Island: that post would be built in 1843, and called Fort Victoria. Simpson also considered the mouth of the Columbia neither convenient nor safe for ships: after all, in his own recent departure for the northwest coast he had been forced to wait for three weeks to cross the Columbia River bar!

Simpson also worried about the proximity of Fort Vancouver to the American settlements in the Willamette Valley, just across the Columbia River from headquarters. One worry was the possibility of the fort being plundered, by the Americans, for its heavy stock of supplies, trade goods, and weapons. And as you will eventually find out in the Thomas Lowe thread, that almost happened!!

In addition to all the above, Simpson considered the possibility that the boundary line west of the Rocky Mountains would not follow the Columbia River to the Pacific Ocean, as most HBC men, including John McLoughlin, thought likely. As we now know, when negotiations between Great Britain and United States were completed, the boundary line followed the 49th parallel west to the Straits of Juan de Fuca, and then jogged southward to leave Fort Victoria, on Vancouver’s Island, in British Territory — exactly as Governor Simpson had forecast!

These matters were still unsettled when Governor Simpson and John McLoughlin boarded the Cowlitz and sailed south to view McLoughlin’s new project: the California Territory post at Yerba Buena, in modern-day San Francisco. After that the two men sailed for Honolulu, arriving there in the latter part of February, 1842. There they had their conference, where a number of verbal discussions took place. For the record, Governor Simpson and John McLoughlin also exchanged letters supporting their arguments — something that was part of the long tradition of the HBC.

On March 1, 1842, John McLoughlin received direct orders from Simpson to abandon Forts Durham and McLoughlin in 1843, and to construct a new depot on Vancouver’s Island. McLoughlin argued that Simpson had made up his mind on this before coming to the coast: Simpson said he had not thought of conducting the trade with the Beaver until he was actually on the Northwest Coast. John McLoughlin argued that the HBC traders on the coast agreed with him that their posts should not be closed down, but Simpson was aware that the men he had talked to agreed with his assessment. Yet, in November 1843, Douglas noted that some of the men who had agreed with Simpson on his visits, had changed their minds and now agreed with John McLoughlin.

At the end of their conference, John McLoughlin and Governor Simpson parted company in the Sandwich Islands [Hawaii], and never met again. McLoughlin returned with the London Ship, Vancouver, to Fort Vancouver, and Simpson commandeered the Cowlitz and took it north to Sitka, to begin his infamous journey around the world (via Russia to England, and then back to Montreal). On his way to Sitka, Simpson stopped at Fort Stikine, where John McLoughlin Jr. was in charge. (John McLoughlin Jr. had replaced the first manager, William Glen Rae, in the early part of March 1841). As we know, the Cowlitz reached the anchorage on the evening of April 25, 1842, when Simpson wrote:

My mind was filled with apprehension that all was not right, by observing that both the English and Russian Flags on the Fort were half mast high, and that Mr. John McLoughlin, the Gentleman left in charge, did not appear on the platform; the stillness that prevailed on shore — one man only belonging to the Establishment having made his appearance at the gate, evidently showing that there was a mournful tale to tell, and on landing, I was more shocked than words can describe to learn that Mr. McLoughlin was no more, having fallen on the night of the 20/21 Instant in a drunken fray, by the hand of one of his own men.

Much of this story is already covered in this blogpost: https://nancymargueriteanderson.com/northwest-coast-posts/ . Other parts of this story are told in this post: https://nancymargueriteanderson.com/fort-victoria-murderers/ Do you feel like we are going around in circles? In a way, we are. This post is a roundup of these stories, in a way, but it will lead us to another part of the story — that is John McLoughlin’s response to the news of the death of his son, and how it affected his work at Fort Vancouver.

So when the rest of this story is written, you will find it here: https://nancymargueriteanderson.com/john-mcloughlin-1842/ or something like that!