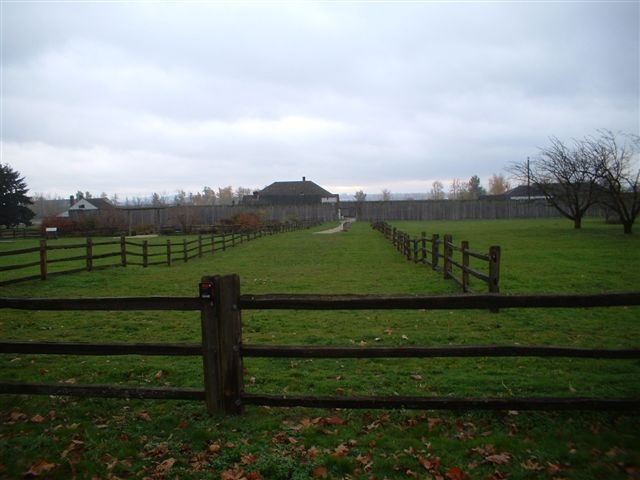 This blog post is a continuation of https://nancymargueriteanderson.com/john-mcloughlin/ which post addressed what happened to Chief Factor John McLoughlin, of Fort Vancouver, in 1841. You will remember that we ended that blogpost with the words of Governor George Simpson, on his approach to Fort Stikine where he discovered that the senior McLoughlin’s son, also named John, had been murdered by his own men.

Governor George Simpson immediately decided that whatever had happened inside Fort Stikine was caused by John McLoughlin, Jr., himself. Simpson presumed that the story told to him, that young McLoughlin was a drunkard, was true, and he believed that McLoughlin’s men had been driven to revolt by McLoughlin’s threats of violence.

The Governor was also immediately aware that the murder had taken place in Russian territory, in a fort that had been recently leased from the Russian-American Company [a fur trading company locating in the Alaska panhandle], and that the Canadian courts would have no jurisdiction here. He took depositions from the half-dozen men who were actively involved in the conflict, and these seemed to indicate that the fatal shot had been fired by Urbain Heroux. Simpson took Heroux with him when he returned to the Russian headquarters at Sitka, and turned him over to the Russian authorities pending an investigation.

On April 27, 1842, just before he left Fort Stikine, he wrote two letters to Chief Factor John McLoughlin. One of these letter informed Chief Factor John McLoughlin of his son’s death; the second, now lost, appeared to suggest that McLoughlin should call for an investigation. The tone of Simpson’s letters were unsympathetic and cold, and he frequently blamed young John McLoughlin for causing his own death. Simpson also believed that if a trial was actually held in a Canadian court (should it be allowed), the murder would be declared a justifiable homicide.

Unfortunately, McLoughlin did not hear of the murder of his son until the Cowlitz returned to Fort Vancouver with Simpson’s letters, in the early part of June, 1842 — a month and a half later. The Chief Factor was already angry, as he had been dealing with his unhappiness with the changes that Governor Simpson was making to his — McLoughlin’s — district. When he received the news of his son’s death by murder, he became distraught to the point of emotional instability. He demanded an investigation, and he sent Donald Manson to Fort Stikine to carry out that investigation.

One of the murderers, an Iroquois man named Pierre Kanaquassé, (or Peter the Iroquois), was dismissed from the Company’s employ by Governor Simpson while he was at Fort Stikine. Kanaquassé arrived at Fort Vancouver, planning to return to Montreal. John McLoughlin, however, decided to send him to Fort Simpson, where he was to be held for further investigation. Peter the Iroquois was kept aboard the HBC ship Cadboro at Fort Nisqually, where he decided to tell James Douglas his story of the murder. Douglas transcribed what he said and sent it to McLoughlin, who then travelled to Fort Nisqually to interview the man once again. The participants of this interview or inquiry included Chief Factor McLoughlin, Donald Manson, James Douglas, Captain William Henry McNeill, and Reverend Jason Lee. After the interview, McLoughlin described Kanaquassé as “one of the Greatest villains in the country… whom necessity alone had obliged us to Employ.” (This information is corrected below.)

Kanaquassé’s evidence destroyed Governor Simpson’s claims against John McLoughlin, Jr., as he admitted that he had never seen young McLoughlin drunk, and could tell of no occasion when a man had been punished at Fort Stikine, without cause. He told the inquirers that John McLoughlin Jr’s murder had been planned: it was a conspiracy between the men who all worked at Fort Stikine. According to Kanaquassé, Thomas McPherson had drawn up a contract of sorts, and all the men except one had signed it.

At the end of this interview, McLoughlin confined Kanaquassé to barracks at Fort Nisqually. John McLoughlin then sent Donald Manson north to Fort Stikine to investigate, with instructions to examine all the men, and to take those who were suspected of being implicated in the murder to Sitka for punishment. In dispatch after dispatch, John McLoughlin kept the Governor and Committee in touch with what he was learning about his son’s death. These reports went on for months: in fact, he wrote and thought of little else.

In the end, the disagreements between Governor Simpson and John McLoughlin became a source of embarrassment to the HBC’s Governor and Committee in London. Because Governor George Simpson was so important to the Company, the Committee members could not deny his statements. Still, opinions in London began to change, and Archibald Barclay, the London Committee’s secretary, came close to admitting that he believed the senior McLoughlin’s opinions were correct — excepting, of course, the claim that Governor Simpson was responsible for John McLoughlin Jr’s death.

For their part, the Russians wanted no part of this inquiry, and turned over the three men they held to Donald Manson. After consulting with Chief Factor John Work at Fort Simpson, Manson brought all the men involved down to Fort Vancouver. McLoughlin sent the men to Norway House with the outgoing Express of 1844.

But there is a problem with the above statement: as we already know, the men were not kept at Forts Stikine or Simpson, nor were they kept at Fort Vancouver. Nor were they at Fort Nisqually. Instead, they were taken down to Fort Victoria, the new post that was just being built on the southern end of Vancouver’s Island in summer, 1843! See this post: https://nancymargueriteanderson.com/fort-victoria-murderers/

So, these men were at Fort Simpson (or Fort Stikine) from summer 1842 to summer 1843. When the northwest forts, Forts McLoughlin and Durham were closed down, these men were sent south from Fort Simpson to Fort Victoria, where they would remain until they were shipped out in the York Factory Express of 1844! Is the date correct? The murder at Fort Stikine happened on April 21, 1842. John McLoughlin received his letters from Governor Simpson in early June, 1842. The investigation happened soon after: as we know, Kanaquassé was interviewed at Fort Nisqually: sadly The Journal of Occurrences at Fort Nisqually does not cover the year 1842, and so I have no date for that interview.

But a little investigation got me the information I wanted: in his letter of August 19, 1842, found in The Letters of John McLoughlin from Fort Vancouver to the Governor and Committee, Second Series, 1839-44 [London: HBRS Society, 1943], John McLoughlin states that “in mine of 24 June last, I had sent P. Kanaquassé back to Ft. Simpson as the best place to secure him till I found an opportunity to forward him with the requisite evidence to Sitka…” It also appears from this letter that James Douglas had first interviewed Kanaquassé while he [Douglas] was on his way to explore the harbour at Camosun, where Fort Victoria was built a year later, and that the interview by McLoughlin, Donald Manson, Captain William Henry McNeill, Paul Fraser, John O’Brien, Steel [?], and Angus McDonald of Fort Nisqually, was done after James Douglas had left Fort Nisqually in the Cowlitz. So James Douglas was not at this second interview, as stated above, and Kanaquassé was shipped north from Fort Nisqually to Fort Simpson sometime before June 24, 1842.

Donald Manson was in charge at Fort Stikine from 1842 to 1844, when he went out on furlough to London, and then took over the charge of the New Caledonia District from Peter Skene Ogden, arriving at Fort Alexandria (where A.C. Anderson was) in late August, 1845. Presumably he had left Stikine in spring 1844, travelled out to York Factory in the same Express that the prisoners were travelling in, and returned to New Caledonia in the 1845 incoming Columbia brigade. The murderers themselves would have been sent down from Fort Simpson (and, perhaps, Fort Stikine), in May 1843, arriving at Fort Victoria in early June.  And they remained at Fort Victoria until it was time to travel to Fort Vancouver in time for the departure of the York Factory Express, which would be on March 20, 1844. So these nine men were quite an expense to the company, as they were kept as prisoners at one post or another, from summer 1842 to early March 1844. At that date, they would have been transported away from Fort Victoria, in time to be put aboard the outgoing York Factory Express.

But back to John McLoughlin: Governor Simpson interfered in the punishment of all these men. There were 11 men sent east, including the two witnesses: they were one Scotsman, two Kanakas [Hawaiians], and eight Canadiens and Iroquois. The guilty mens’ wages, which had been withheld by John McLoughlin, were paid by the Company under orders from Governor Simpson. The guilty men were released at Norway House, while the Kanakas, who were the witnesses, were sent back to Fort Vancouver.

However, Simpson’s treatment of McLoughlin Jr’s death was an error that naturally caused much distress to Chief Factor John McLoughlin. McLoughlin’s behaviour gave the London Committee no choice but to support Governor Simpson: his preoccupation with his son’s death “impaired his usefulness to the Company.” In a letter written in 1842, the Governor of the London Committee, Sir John Pelly, instructed McLoughlin to make up his differences with Simpson, or else he would be asked to retire. But McLoughlin’s dispatches continued to be full of complaints about his son’s murder. By spring 1844, the Governor and Committee had finally come to the conclusion that they must replace Chief Factor John McLoughlin at Fort Vancouver. A letter, written to McLoughlin by Archibald Barclay, told him that the

Governor and Committee felt that the advantages they had anticipated from the Columbia being placed in the charge of one person had not been realized, and that his post of general superintendent and its supplementary salary would end on 31 May, 1845. In June 1845, the Council of the Northern Department set up a three-man board of management for the Columbia, to consist of McLoughlin, Ogden, and Douglas.

It was assumed correctly that McLoughlin would react by going on furlough, and when he did, John Work, of Fort Simpson, was added to the Board of Management. Humiliated and bitter, McLoughlin moved to Oregon City in January 1846, and on 28 March notified the HBC that he would not be returning to active duty. The company was not vindictive, the financial terms of his retirement were generous. After the year of furlough he was granted leave of absence for two years, and formal retirement was thus delayed until 1 June 1849. Thereafter he received his full share as Chief Factor for another year, and a half share for five years. [Source: Dictionary of Canadian Biography].

But at the point of his retirement and the formation of the Board of Management, everything changed. John Work managed the remaining posts on the Northwest Coast and ran the shipping and trading duties as well. Peter Skene Ogden and James Douglas managed the fur trade at Fort Vancouver and, likely, Fort Nisqually. Douglas spent some of his time at Fort Victoria: but he does not seem to have shared his Fort Victoria duties with Peter Skene Ogden at all, although he gave up none of his rights to act as senior manager of Fort Vancouver, equal in status to Ogden himself. Whether he liked it or not, however, Peter Skene Ogden was the senior manager in the district: he had been a Chief Factor for a longer time than James Douglas had been, and for that reason alone, he was always the senior manager in the district. Douglas never seemed to understand that: but that was James Douglas all over, as we will all find out.