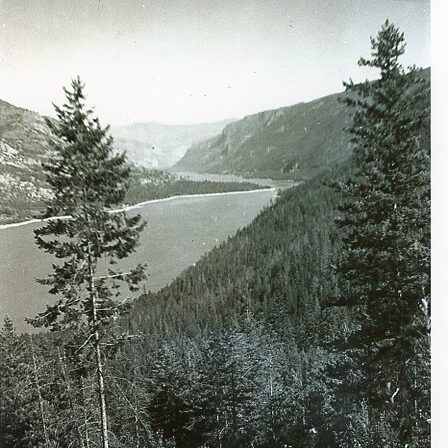 If you want to know more about the three early incoming Expresses — that is, 1826, 1827, and 1828 — you can purchase my book, either from me via Contact sheet, or from the publisher: http://ronsdalepress.com/york-factory-express-the/

Much of the information in this particular post is being taken from The Letters of John McLoughlin from Fort Vancouver to the Governor and Committee, First Series, 1825-38 [Toronto: Champlain Society, 1941]. There is no new information for 1826, 1827, and 1828 in this volume, nor is there any information on the 1829 Express, whether outgoing or incoming.

I now have information on the outgoing Express of 1829: Of course, Governor George Simpson was here: how could I forget! Travelling with. him were James McMillan of Fort Langley, Dr. William Todd, Donald Ross, clerk, and Captain George Taylor, a seaman.

In 1830, Mr. John Edward Harriott (who was at this time posted in New Caledonia, and who must also have led the Express out in the spring) arrived at Fort Vancouver with the incoming Express, carrying the news that he “had the misfortune to lose seven men drowned in a Rapid below Okanagun Dalles; the place has been always considered sufficiently safe to run with loaded Boats, in this Instance there were four Boats in company, the three first past [passed the Okanagan Dalles] safe and were allowing themselves merely to drift with the current till the fourth came up, as by getting in a whirlpool she had fallen a little behind. But the next Rapid is so nigh the one the Boat wrecked in that the three first were in it before they saw the wrecked Boat, which was drifting along with two men on the bottom of it; the first Boats immediately put ashore and the men dispersed themselves along the beach to see if they could give assistance, but to no purpose as they saw none of the crew except the two in the Bottom of the Boat who were saved, and the Steersman who had jumped out of her and swam ashore.” So it’s hard to understand what McLoughlin is writing, but seven men were drowned in a Dalles or rapids somewhere in the Nespelem Canyon, I suspect. I have a little further information on this accident in a letter forwarded to me for further information, with the question — “do you know the names of the men lost?” No, I don’t, but if you do, please tell us. In this second letter, Francis Heron, of Fort Colvile, reported on this same accident, and Bruce Watson says that Jean Monde was drowned on October 25, 1830.

Friday 29 October 1830: Four of our men that accompanied the Express boat arrived from Okinagan, with the most unpleasant news of seven men drowned on the way down below the little Okinagan Dalles. Six of these poor unfortunates were newcomers from Canada and the other was a most useful man of this District by name of Jean Monde. In addition to the above great loss, several pieces of provisions and leather were also cast away.

1831: The incoming Express for that year is in The York Factory Express, and I have little information on the outgoing, except that then-clerk James Douglas was in charge of it, both out and in. In the appendix of The Letters of John McLoughlin, McLoughlin writes this: “Mr. James Douglas goes with the accounts, whom I hope you will allow to return, and I beg to refer you to him and to the accounts for any further information relative to him and to the accounts…” Douglas led out three Expresses over the years, and 1831 was his first. Although George Traill Allan does not say so in his journal, one of the other men who travelled west in this 1831 incoming Express was the American Indian known as Spokane Garry, who was returning home to his family after attending the school at Red River. Spokane Garry can only have travelled out in the 1829 or 1830 Express, as he does not appear in Edward Ermatinger’s Express journal.

I have no information on the 1832 Express, outgoing or incoming — other than that my great-grandfather Alexander Caulfield Anderson arrived at Fort Vancouver on November 4, 1832. A few months after his arrival, he wrote a letter to his uncle Alexander Seton, telling him of his journey to Fort Vancouver. The letter is in the Seton of Mounie Archives, University of Aberdeen:

The river is huge & navigable for 100 miles from its mouth. Salmon are in immense quantity as well as the moose. I have killed only one Buffalo & one deer since I have been in this country and a great many ducks, geese, partridges, &c.

In 1833, I have only the information that James Douglas once again led out the Express to York Factory. John McLoughlin wrote a letter to James Douglas, dated March 21, 1833, instructing him to show the Governor the list of men working at Fort Vancouver. McLoughlin’s letter ended with the phrase, “Wishing you a pleasant passage.” The above-mentioned Governor would be George Simpson, and on March 21, 1833, James Douglas would be preparing to set off on the journey to the annual meeting, where he would meet Governor Simpson.

I am finding it interesting that these letters, all of which are sent to London by the London Ships, do not often report on the Express’s arrival or departure from Fort Vancouver. In later years there is more mention of the Express, but in these early years the incoming express is hardly mentioned in the letters of John McLoughlin to the Governor and Committee in London. In November 1834, however, John McLoughlin reported to the London Committee on the arrival of the incoming Express at Fort Vancouver, led in by Chief Trader Robert Cowie: “The express in charge of Mr. Cowie arrived here on the 16th Ultimo [November] and I am happy that by the accounts he brings of our friends in the interior, the Company’s affairs in that quarter seem to be going on in the usual way.”

1835: This Express, the third Express led out and in by James Douglas, is in The York Factory Express. Douglas’s journal is a really good read and he is an interesting writer. And there is history there: Now a Chief Trader, James Douglas was confident enough in his newly-attained power to make changes to the way the Express ran.

1836: Nothing. In 1837, Charles Ross, of Fort McLoughlin and later of Fort Victoria, brought in the incoming Express from Lachine. I don’t know who took it out, unfortunately, but it wasn’t Ross. In 1838, James Douglas reported on this accident to one of the incoming Express boats:

I resume the pen to address you with feelings indescribably painful, having to communicate intelligence of a most distressing event in the upper Columbia, whereby twelves lives have been lost.

In my letter of the 4th Inst. I mentioned the arrival, at this place, of Chief Trader [John] Tod with a detachment of the York Factory recruits, and noticed the cause which had made it necessary for him to leave the bulk of the party behind. A Boat which Mr. Tod had sent back from the Upper Columbia Lake left the Boat Encampment on the 22nd October with the last of the party. In the evening of the same, when running one of the Rapids below Dalles des Morts, the Boat unfortunately filled, and the following persons perished in attempting to gain the shore..

Twelve people died in this accident: four at least intended to visit Fort Vancouver, but the rest were men who worked for the HBC or their children. I wrote this story quite recently in another blogpost, so if you want to learn more, see: https://nancymargueriteanderson.com/bits-and-pieces/

So that brings us up to 1839, when Chief Factor John McLoughlin, who had been on furlough to England, returned home to Fort Vancouver with the incoming Express. (That is why James Douglas was the man who reported on the accident that happened in 1838, above). Dr. McLoughlin wrote from Fort Vancouver on October 24, 1839, to say:

So I think this is a good place to stop this blogpost, and we will continue it in another segment or two. When the next section if published, it will appear here: https://nancymargueriteanderson.com/columbia-express/

Remember that if you have any additional information to give us all about the incoming Express, and who was in it and what happened, I would be delighted to hear it — particularly if you have the names of the six men lost in the accident in the Okanagan Dalles in 1830. And thank you!