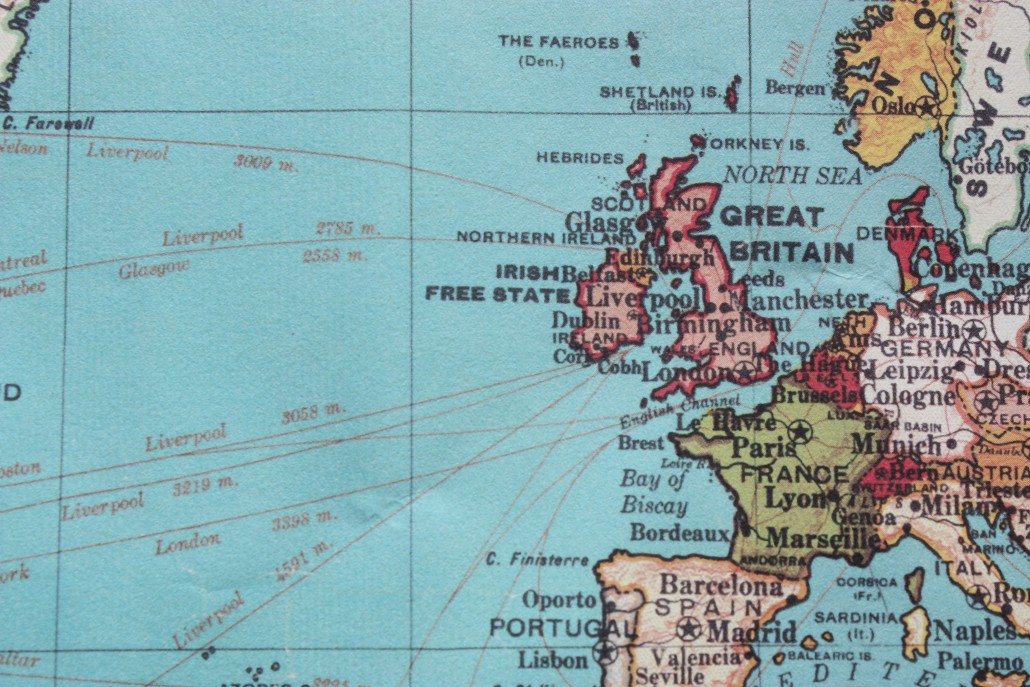 Pierre Hudon dit Beaulieu took his “dit” name from Beaulieu, in the land of his ancestors located between Chemillé and Melay, in the Province of Anjou, northwest of the city of Paris.

Firstly, to re-establish where he came from. This genealogical story comes from the unpublished manuscript, “History and Genealogy. In pursuit of Pierre Hudon-dit-Beaulieu, Study by Gisèle Piou.” It is found in a French archive, but I don’t know which one.

Our Pierre Hudon has chosen to take the nickname of Beaulieu, which comes from the name of the land of his ancestors, located between Chemillé and Melay. It is a territory which includes several farms, a water mill, and a wind mill. It is at the extremity of ancient Anjou, near the limits of the county of Mauges that raises the city of Chemillé.

Here’s a bit more from the same manuscript:

The water mill “Georges” is situated next to the farm of Bouchètiere, it is quoted in the texts in 1539. Nearby, the “Moulin [Mill] of Beaulieu” is located at a place also called today, Windmill, on the D.160 [???]

So “Georges” was a water mill, and “Beaulieu” was a wind mill, and it appears that they were only a short distance away from each other.

The child, Pierre Hudon dit Beaulieu, was baptized sometime in the years between 1647 and  1649, at Chemillé, and it is known that he was the son of Jehan [Jean] Hudon dit Beaulieu and Francoise Durand. Pierre had two sisters: Marie, born about 1638; and Jeanne, born about 1642. Jean, their father, would have then been married before 1638, but there are no registers remaining to tell the date, the circumstances, and the family who would have been listed as attending the wedding.

What is interesting, though, is that Francoise Durand came from a family of Merchant Bakers in Chemillé. That means that other members of her direct family were also Merchant Bakers — that’s the way that things happened in France. Careers were inherited and came down through the family, and one rarely if ever moved outside the family career.

One thing to note is that this manuscript does not say, absolutely, that Hudon was the Miller who leased the Beaulieu Mill. It seems to be assumed, and it may be that the record doesn’t exist any more. He might even have been a Baker that worked closely with the lessors of the Mill. The author is a little indefinite, but its also possible that I missed the statement with my not-so-wonderful translation from the modern French of France.

There are, however, a number of Hudon women wed to millers in this district, so some Hudons might also have been millers — the same way that my Birnie family worked with leather, sometimes as tanners, sometimes as saddlers, or shoemakers. Millers associate with Bakers, of course, and so Pierre Hudon might have come from a family that remained in the Baking business. It was a career to be proud of; one that would support him if the times were right. The author of this manuscript says, “See some of the environment in which Pierre Hudon (dit Beaulieu) was in France. His family was one of the notables. If he had not had this opportunity to go to New France, he would probable be installed Baker, as his uncle and cousin Jean Durand and his [Durand’s] son in Chemillé.”

Anyway, a little more family history: Marie Hudon, Pierre’s sister, was married June 22, 1669 at Chemillé Notre Dame, to Pierre Jamin, son of the deceased Gille Jamin and Jann Thomas of the parish of St. Pierre de Chemillé, in the presence of their parents and other members of the husband’s family. Marie had one child before dying at the age of 40 when her son, Francois Jamin, was only 4 years old.

Pierre’s sister, Jeanne, was born around 1642 and died August 14, 1669, unmarried. “She will not have descendants,” the writer of this manuscript notes.

Now, remember that Beaulieu is not Pierre Hudon’s actual name. It is a “dit name,” which means a nick-name, more or less. In this case it indicates the city, town, or district that he came from. “The wind mill of Beaulieu is recorded in the feudal title of the fief of Bouzillé the 13 March 1552.” Which fact in my eyes makes it even more unlikely that our Hudon is directly connected with the mill as a lessor. So, Baker is good — Miller seems a little less likely as his career, I think.

When and why did Pierre go to Quebec.

In 1663 the famine of 1661-1662 is the most serious of those known to Anjou in the 7th and 18th centuries. It proceeded directly from climate conditions. As the result of continual rains during the summer of 1661, the year’s harvest is catastrophic, which is all the more deplorable since the very poor crop of 1660 left practically no surplus. On September 6, the king authorized the sale of wheat within Anjou, but prohibited its export out of the province. In fact, the absence of reserves and the actions of the hoarders mean that the wheat disappears very quickly, both in the cities and in the countryside, and that the province can no longer count on the arrival of wheat from the outside, especially Brittany, one of the few provinces of northern France where the harvest was almost normal.

There was an influx of starving peasants into the cities, and because of the “difficulties encountered with the municipality of Nantes to import the Brittany and Dutch wheat from Nantes to Angers [a city in Anjou province], the situation in the city worsens during the winter from week to week. In April, a bushel of rye is worth (when it is found) 70 sols [an old French currency later called sou, and even later replaced by livres], four times more than in normal times.”

Francois Lebrun, the intendant of Tours, wrote to Colbert in March: “The scarcity is even greater in the country. The peasants have no bread and live on charity, the labourers who had been accustomed to give the alms are forced to come and ask for it in town…

At the end of March, the intendant paints Colbert a dark picture: “The three provinces that make up this generality are more miserable than one can imagine. No fruit was harvested in 1661 and the very little wheat is extremely expensive. There is no sign that the next harvest is very plentiful, half the land, for want of arms [workers], has not been ploughed; the alms are not yet done, the bad weather and the disturbance of the winter having hitherto prevented from ploughing, and to overcharge of misfortune, the great waters which increase every day have drowned a lot of lands which are ploughed and seeded.”

So starvation lay over the land, and people moved to the cities where there was also little in the way of food. Things worsened over the next few years. “Unfortunately, the harvest of 1662 is even worse than expected, so the situation remains tragic throughout the winter following a further rise in grain prices. Only the establishment of the crop of 1663, very beautiful, causes a gradual return to normal.”

A gradual return to normal. Of course millers and bakers were especially hard hit: with no wheat or rye there is no grain to mill, and no flour with which to make the bread. But what was even worse, other conditions also contributed to the disaster that was caused by famine and starvation:

The mortality of 1661-1662, a crisis of both subsistence and morbidity, is the most formidable demographic catastrophe experienced by Anjou in the 17th and 18th centuries. Its gravity comes from the fact that the cereal crises that results from the “rotten” summer of 1661, reaches a population already undermined by the “great diseases” that are visible since the end of 1660. The testimonials of the chroniclers are, on this point, formal and confirmed by the parish registers.

Barthélemy Roger, a good witness, writes, “Anjou was at this time (November 1660) greatly affected with fever accompanied by purple [sic], as it was still in the next two years, which caused great mortality, as did the famine and the dearness of wheat.” On his side, the priest d’Avrille clearly makes the distinction: “The weather has been so contrary in this season (summer 1661) she threatened us with famine, killing the fruits of the earth [potatoes], besides the extraordinary course of disease that have afflicted many families.”

What disease is it exactly? Barthélemy Roger speaks of “fevers accompanied by purple”; the priest of Pouancé speaks of “contagion”; that of Plessis-Grammoire, “dysentery and pestilential fever,” that of Clefs notes on a special sheet, from June 1661, the deaths due, he says, to the “dysentery” or scarlet fever. The bishop Henry Arnault, in his mandate on December 16, 1661, will speak about the “extraordinary course of diseases that afflict almost all families.” From this imprecision it may be concluded that Anjou is suffering, not from a well-characterized epidemic, but from a sudden outbreak of these evils, which worsened to the endemic state, measles, or scarlet fever (sometimes confused under the name of purple), smallpox, dysentery.

I don’t believe that Pierre Hudon dit Beaulieu would have come to Quebec unless his father was dead, and especially not as a fifteen year old. After 1663, when the mills were once more able to grind wheat, and flour was available, he and his father would have had thriving careers in France. Almost certainly, Pierre’s father died of one of the diseases that was rampaging through the countryside over those years.

So we don’t know when Pierre Hudon’s father died. We only know that he was listed as “Deceased” when Jeanne Hudon, Pierre’s sister, died in 1669. And we also know that Pierre Hudon dit Beaulieu arrived in Quebec sometime before April 1664, when he was awarded damages of 20 Livres by someone named St. Martin, who had assaulted him. At that time, Pierre Hudon was fifteen years old, and he was a domestic servant in the household of M. Marsollet, a person of some importance in New France. This “M. Marsollet” is Sieur Nicolas Marsolet, 1601-1677.

In the 1666 census in New France, there is a Pierre Hudon in Quebec, who is practicing the profession of baker. He is now 18 years old. How did he get there? And what did he do for the next ten years, when no document or census indicates his presence in Quebec?

I know a little bit of this story, and it is very interesting. But you will have to wait.

Now for anyone who has French ancestry, and whose ancestors came from Anjou in about 1663 — you now know that famine and disease drove them away from Anjou and brought them to Quebec.

To go back to the beginning of this thread, see here: https://nancymargueriteanderson.com/hudon-dit-beaulieu-1/

When the next one is published, it will appear here: https://nancymargueriteanderson.com/pierre-hudon/