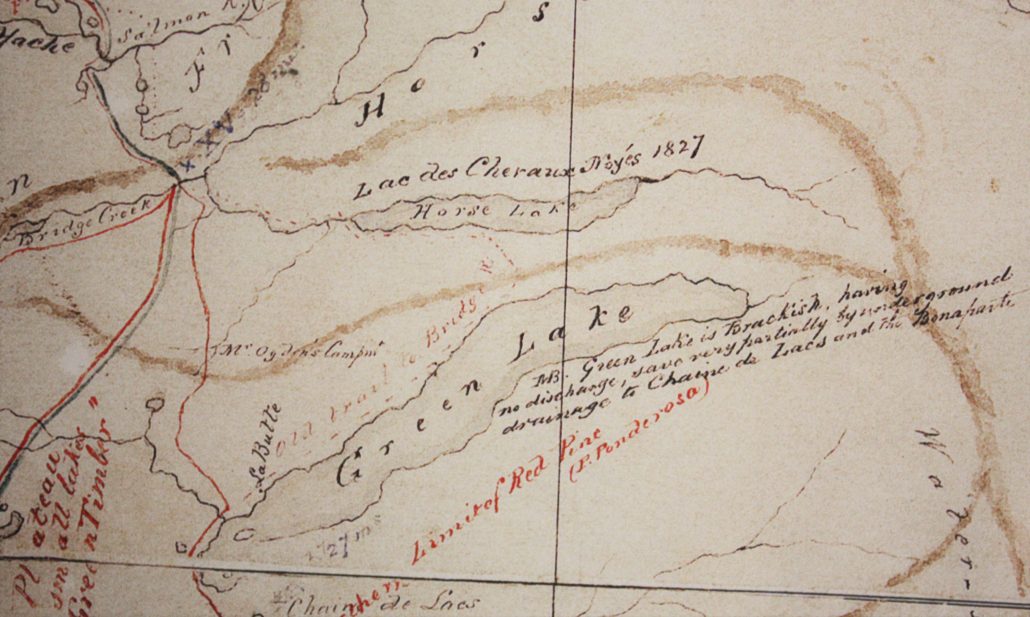 From 1843 to 1850, the New Caledonia brigades traveled over the trail lightly marked in red dotted lines on this map. In 1851 Peter Ogden made a new trail that cut off this big loop to the east. So I think there are two trails to find, that run between Green Lake and “Drowned Horse” [Horse] Lake. Image from A.C. Anderson’s 1867 Map of British Columbia, CM/F9, Courtesy of the Royal B.C. Museum, B.C. Archives. Detail from Original Map.

This is the most difficult part of the trail to write about, as there are two routes in this part of the country, neither of them well known. One is the earlier route, before 1850: the other is the later route that existed after 1851. For the most part it is the earlier route that I am now exploring, and it is a difficult and confusing exploration! Mostly I confuse myself.

Anyway, we are looking at the part of the country between Green Lake and Horse Lake. The map was drawn by Alexander Caulfield Anderson, who rode over the trail until spring 1848. On his map you will see he indicated the presence of a butte, on the north shore of Green Lake. It appears to stand on the shoreline short distance east of what is probably Eightythree Creek [also known as 83 Creek, Eighty Three Creek, and Eighty Three Mile Creek, depending on whose map you are reading]. I will call it Eighty Three Creek.

So I know what a Butte is, more or less. It is a hill with steep sides and a small, flat top. Buttes are formed when hard rock lies over a layer of softer, less resistant rock which is worn away through erosion. Unlike a mesa, a butte has a narrower or smaller top than base.

However, in British Columbia, there are hills called Buttes that are not buttes, but volcanic plugs. Lone Butte is a prime example of a volcanic plug, and other examples are nearby: Mount Begbie, close to the north-west end of Eight Three Creek [so nowhere near Green Lake]; Forestry Hill, also near Lone Butte to the north; and Tin Cup Mountain, on the south shore of Green Lake close to the Chaine de Lacs mentioned in the previous post.

In searching for the possible butte that might be “La Butte,” on Anderson’s map, I discovered a UBC thesis online, titled: “The Petrology of Several Late Tertiary Gabbroic Plugs in the South Cariboo Region, British Columbia,” by Robin Bruce Farquharson, 1963. In the first paragraph of his abstract, he writes this:

Four olivine gabbro plugs crop out on the basaltic plateau in the south Cariboo region of British Columbia. The plugs form elliptical knobs of unaltered gabbro which stand 100 to 200 feet above the plateau surface. They are 300 to 600 feet in greatest diameter, as seen in plan view. Two plugs, Mt. Begbie and Forestry Hill, are described in detail in this thesis.

The other buttes mentioned in this thesis are Lone Butte, and Tin Cup Mountain. But there are other buttes in the area, which do not seem to be volcanic plugs. Huckleberry Butte, close to Lone Butte, does not seem to have a volcanic core and is not included in the list of volcanic cores in this thesis. There is, however, some evidence on its slopes of the same volcanic activity that created Lone Butte. Another butte, called Olsen’s Butte, is on Cariboo Lake just east of Green Lake. I have almost no information about Olsen’s Butte, whether volcanic plug or not, though I can locate it on Google Earth. But that is all the information I have!

As you can see, none of these known Buttes or volcanic plugs are anywhere near where Anderson placed his “La Butte.” on the north shore of Green Lake a short distance east of the mouth of Eighty Three Creek.

Now, in the map above, the newer brigade trail — the one that was built in 1851 — is clearly indicated in red. It follows the banks of Eighty Three Creek north, probably passing close to Mt. Begbie, and joins the old brigade trail just west of the town of 100 Mile House.  But this is the new trail, and like I said, it is the old trail I am interested in. This earlier trail is indicated in a faint dotted line that swoops far to the east of Peter Ogden’s new road.

There are two possible explanations: one is that a hill or bluff that nudged the lakeshore was called a butte, either by the Canadiens, or by Anderson. This is possible: when you look at Google Earth with the terrain button on, there are apparent bluffs. But to be certain I will have revisit Green Lake sometime when the ground isn’t covered by snow.

The second explanation I have for this is that, in French, Butte might mean “mound,” or “knoll.” This is land that was covered and scoured by the Cordilleran ice sheet. Perhaps we are, once again, speaking of the plateau’s glacial features, though different features than we spoke of in the last post, where I said:

The plateau’s glacial features included both kames [mounds], and eskers [snake-like ridges]. Some of these ridges, or eskers, were fifty feet in height and 100 feet in length…

Were the kames also so tall? George Mercer Dawson’s Report on the Area of the Kamloops Map Sheet might well give me the answer, but it doesn’t cover the area north of Green Lake!

However, I kept searching, and have found a few items of interest: Green Lake is a marl lake, which means it has hard water with a high pH and low nutrient levels — this is what gives it its marvelous colour. It is 18.5 km long, and averages 1.5 km in width with an average depth of 10 metres. Green Lake has always been an important meeting place for the Secwepemc people, and the Secwepemc name for the lake is Cqelqletkwe, or “jumping off the ledge.” It was a gathering place for all Secwepemc, a place where they met and traded.

There are several important trails running through this area, the writers of their community plan tell us;

The Hudson Bay Company Fur Brigade Trail — Tobacco Creek/Fort Alexandria trail from Kamloops Lake to 100 Mile House. Parts of the trail follow Hutchison Lake Road [one of the Chaine de Lacs], the route passes the southwest corner of Green Lake, it follows part of Green Lake North Road, then turns north towards Horse Lake and 100 Mile House. Over time, since the trail was not used since 1862, sections have been turned into roads, railway beds, or have become part of private lands. There are traces of the trail here and there, but it is rare today for someone to travel over this entire route by foot or horseback.

Well, maybe we should do it, once we have found all the pieces of the trail we can find! But I wonder which trail this is, the new or the old? Although it is more likely to be the 1851 trail, it could be either. As it happens, Green Lake North Road goes all the way to the east end of the lake!

So I learned a lot more about Green Lake and the community that surrounded it, but learned nothing more about the kames, mounds, buttes, volcanic plugs, and/or knolls that Anderson might have drawn on his map. Clearly, this is going to take another personal visit to Green Lake! Its odd that when you visit a lake as lovely as this one, you photograph the lake and not the landmarks that are behind you.

But even if we don’t know exactly by which route these brigaders reached the south shores of Horse Lake, they have arrived there. My next blogpost in this series will continue west, along the shores of Lac la Hache and Williams Lake. I don’t know how far we will get, but we will get to Fort Alexandria sometime in the future.

To go back to the beginning of this series, click here: https://nancymargueriteanderson.com/hope-slide/

If you want to go back to the beginning of this 1843 trail beginning at Kamloops, go here: https://nancymargueriteanderson.com/1843-brigade-trail/

The next post in this series is written and published, and is here: https://nancymargueriteanderson.com/john-stuart/

Copyright, Nancy Marguerite Anderson, 2017. [This will be rewritten when I learn more, if I learn more]. All rights reserved.