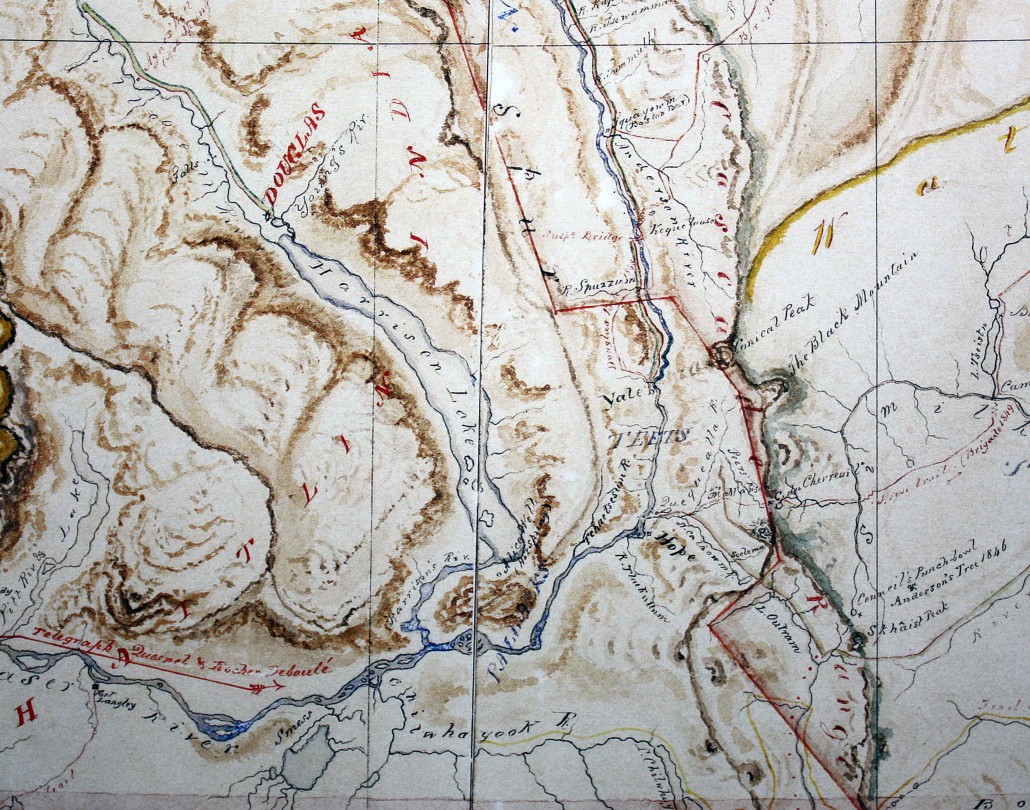 Harrison’s Lake and River is shown in this map, and Fort Langley is just off the map to the west (left). The Lillooet River flows into the northern end of Harrison’s Lake. This is A.C. Anderson map of the Colony of British Columbia, CM/F9 Courtesy of the Royal BC Museum, BC Archives. Detail from original map. This map is copyrighted, both the the B.C. Archives who owns it, and to my website. Enjoy the image, but please respect the copyright.

We begin again with Alexander Caulfield Anderson’s journal of his exploration/expedition from Kamloops to Fort Langley, by what later became the Harrison-Lillooet Trail. The year is 1846, and his party has reached Lillooet Lake, at today’s Mount Currie.

The natives whom I saw, amounting in all to about 50 men with women and children in proportion, were suffering from want of provisions, and were unable to supply us any. They ascribe the dearth to the state of the water, which impedes the usual fishing… They possess, however, some good cedar canoes, made after the model of those seen on the coast. After some parlaying I succeeded in hiring a couple of these, together with the necessary conductors. Embarked after 7 o’clock, and after proceeding three miles encamped on a low point at the entrance of a considerable lake trending off SE.

Friday 22nd [May] — Fine. Made an early start. The lake is about 20 miles in length. At the end a small rapid; then still water for several miles. Arriving at a village near the head of a rapid, we disembarked in order to lighten the canoes; but as we were on the eve of setting out, two of our canoe-men refused to accompany us further with their canoe — a determination arising, it appears, from some exaggerated statement that has reached them of the hostile disposition of the lower Indians. Thus we found ourselves with only one canoe, too small for the accommodation of our party.

I suspect that this is where his guide, “an Indian from the Lakes” named N-Poomsk, left the party. The aforementioned lakes would be Anderson and Seton Lakes, and N-Poomsk was probably a St’at’imc from one of those two lakes. N-Poomsk would probably not feel comfortable, nor safe, invading the territory of another First Nations peoples, and so chose to leave the HBC men to their own devices. After all, if he went all the way to Fort Langley, he would have to return home alone, through what might be, to him, “enemy territory.”

In the journal entries below the word “boutes” is pronounced “boots,” and is a fur trade term that refers to the expert bowsmen and steersmen that manned the HBC canoes and boats. These Lil’wat men also proved that they had the expertise to bring the HBC men down their raging river in safety: something the HBC boutes might not have managed because of their unfamiliarity with the dangers of the river.

Having proceeded several miles along the bank we reached a village, where I fortunately succeeded in hiring a fine canoe, with two expert boutes.

In the evening (having made a succession of discharges in the interval), we encamped at the head of a rapid or fall, where it is necessary to drag the canoes. Procured a few fresh salmon during the day.

I find the river very different from what I expected. At this stage of the water it is a perfect torrent; and at a high stage (it is now at half-water) must afford a very precarious navigation. In fact, but for the expertness of our Indian boutes who are thoroughly versed in the intricacies of the river, we should, I fear, have had much difficulty in getting through.

As you see, Anderson was impressed with the abilities of the Lil’wat canoemen who knew their river well and who took him and his men down in their canoes with little apparent difficulty. His party had little difficulty with any of the St’at’imc people who inhabited the lakes above, and the Lil’wat, whose rivers he was now being guided down. For the most part, all had welcomed his party, some giving gifts of food that were so generous they could be carried away. At Seton Lake a hundred members of a village poured into his camp to shake the hands of all the men who accompanied him: “Killing one with kindness,” as Anderson said. At the end of Anderson Lake they had shared their stories with him. Further downriver, the Lil’wat, though apparently starving, had abandoned their fishing and carried his party downriver in their fine canoes: a favour for which they would be generously paid at Fort Langley. The HBC men were vastly outnumbered by the First Nations inhabitants of this region, but at no point were they threatened. Nevertheless, the danger was real. As Anderson said, “one felt constantly as if seated on a powder magazine which a spark might at any moment ignite.”

In the end, his journey down the tumultuous Lillooet River discouraged Anderson from considering this a possible brigade trail. In his report to Fort Vancouver he wrote about his change of mind:

I was, up to a certain period of my journey, truly convinced of the impossibility of proceeding directly to Harrison’s River, with horses, under the hope that a system of communication might have been rendered available, by using Craft between the end of the Lakes and the East bank of Fraser’s River, and employing a small band of horses to effect the necessary portage between the former point and Lillooet [River]. This, though rather an intricate and certainly a troublesome system of communication, might possibly, under favourable circumstances, have been made available; premising that there should exist a possibility of conducting a small band of horses to the point in question from Fort Langley or elsewhere at a later period of the year. But a reconsideration of the difficulties inseparable from such a plan, coupled with the experience I have since had of the communication between the upper part of Harrison’s River to this place, induces me to relinquish the idea. Far from finding the navigation of that stream so placid as I had been led by common report to expect, I was disappointed to find a considerable portion of it greatly obstructed by rapids, and present obstacles of no inconsiderable nature. A reference to the rough sketch herewith will show the part to which I allude. I descended the river at half-water, and in that state the rapids were very violent, though not always dangerous. I do not consider that loaded boats could ascend the river in that state of the water; or if so at best, by very slow degrees; both from the violence of the current and the apparent impossibility, in many places, of poling or putting out the line.

Having made the decision to not pursue this rough river as a possible brigade route, Anderson was eager to reach Fort Langley. His skilled canoe-men brought him quickly down the river to Harrison’s Lake and River [both had been named in 1827 in honour of then-deceased HBC director, Benjamin Harrison Esq.]

Saturday 23rd — Cloudy weather. Having carried our canoes, we set out at 1/4 to 3 a.m., and after passing with occasional delays a succession of rapids, connected by an impetuous current, we arrived at the second lake [Harrison Lake] at 10.35. It varies in breadth from 2 . to 4 miles. The upper end bounded by steep, rocky shores affording few, if any harbours for a long distance. At 6 p.m. encamped opposite to some islands, having come about 24 miles upon the Lake. We fell in with 3 Indians very opportunely this afternoon, for they supplied us with some dried salmon, our former stock of which was exhausted.

Sunday 24th — Heavy rain set in at daylight. Set out at 2 3/4 a.m. At 6.40 reached end of lake where a sluggish current commences. The total length of the lake is about 36 miles, according to my computation. At 7.40 breakfasted opposite to an Indian village. At 11 1/4 fell upon Fraser’s River, which runs WSW. Reached Fort Langley at 5 p.m.

At Fort Langley, Anderson conferred with Chief Trader James Murray Yale. Yale had already informed Anderson of a possible route over the mountain to the Upper Similkameen [Tulameen] River. I am not going to give you the records of that journey — or at least I am not yet doing so. All of that will be covered in my book on the Brigades, now being edited. The next post in this series will probably deal with James Douglas and his correspondence a few years later, before the decision was made to open up this trail for the gold-miners eager to reach the Fraser River north of its barrier of canyons and rapids. There’s lots of little stories here, and few big ones too.

By the way, you might think A.C. Anderson pioneered this route: he did not. The first man to explore Seton and Anderson Lake was Francis Ermatinger, who was looking for a route to Fort Langley from the Thompson’s River post of Kamloops in 1827. He made it all the way to the Fraser River and Fort Langley, as Archibald McDonald reports in Peace River: Journal of a Canoe Voyage from Hudson’s Bay to the Pacific, by the late Sir George Simpson. If you want to read this series of posts (which includes John Work’s journey to Spokane House in 1823), go to the Two Canoes series on this site.

At a quarter to two, passed the mouth of “Lilliwhit” River [now Harrison’s] a stream of some size, as is indicated where Mr. F. Ermatinger arrived on its banks, a day’s journey west of second Peselive Lake in August, 1827, and as appears in his report to me on the subject, “Thompson’s R. Correspondence 1827-28.”

If you want to find out more about the result of Anderson’s explorations, you can purchase my book: The Pathfinder: A.C. Anderson’s Journeys in the West.

To go back to the beginning of this series, go to: https://nancymargueriteanderson.com/harrison-lillooet-trail/

When the next post in this series is published, it will appear here: https://nancymargueriteanderson.com/harrison-lillooet-trail-5/