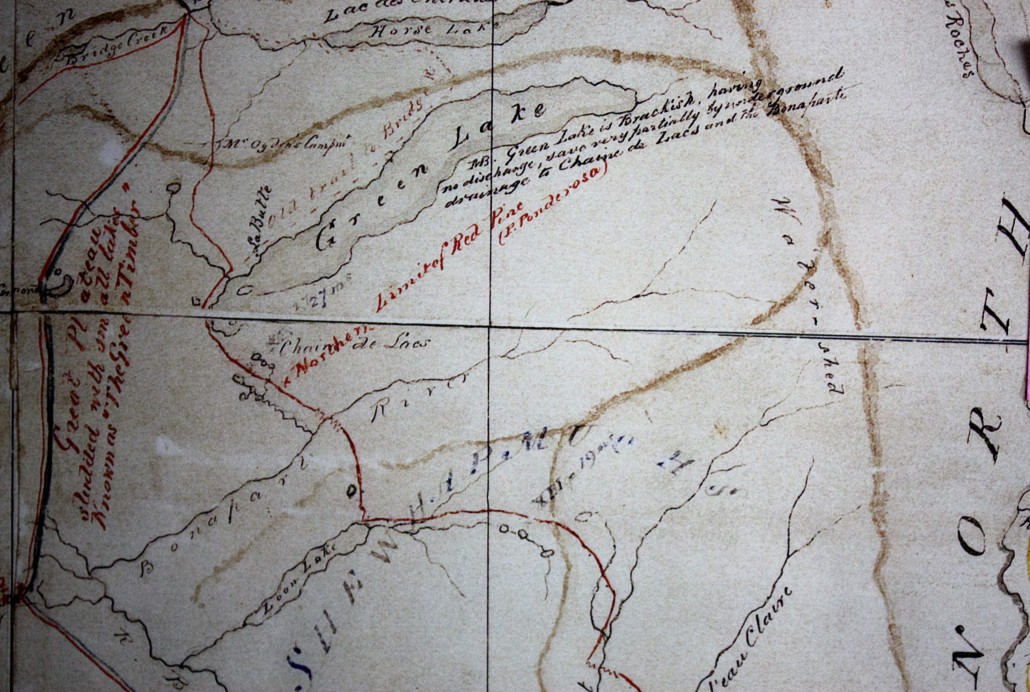 From Loon Lake, in what is now the province of British Columbia, the men of the incoming New Caledonia brigade rode northwest, crossing the range of hills that lay between them and their immediate destination, the Bonaparte River. The men were on their way home, heading north to Fort Alexandria on the Fraser River, and Fort St. James on Stuart’s Lake. The journey north to Loon Lake from Copper Creek is written up here: https://nancymargueriteanderson.com/loon-lake/

Loon Lake is in the bottom left hand corner of this map, just south of the Bonaparte River. The red line that comes in from the west, to the top end of Loon Lake, was the part of route covered by the last post, see above. We are now speaking of the journey north from Loon Lake, crossing the Bonaparte River and continuing north to the west end of Green Lake.

Here is what I have put together, after learning more about this part of the brigade trail:

Brigade Creek led them down from the plateau to Loon Creek, which they followed west to the east end of Loon Lake. Anderson estimated that Loon Lake was about eleven miles from the Beaver Swamp [see last post for the location of this landmark].

They forded the Bonaparte, and Anderson estimated that this thirty-yard-wide ford was about nine miles from the east end of Loon Lake. He would be estimating the distance of course, time multiplied by the miles per hour a horse supposedly travelled in a walk.You can see their trail led them by switchbacks down to the banks of the Bonaparte River.

After they had forded the river, their trail led them by many switchbacks up a steep hill that Anderson described as being clearly wooded. Here they were atop another rugged, wooded plateau — part of the “Green Timber” plateau, a roughened, rocky land with numerous moraine ridges deposited on the earth’s surface by the Cordilleran ice-sheet that had covered the plateau two million years ago.

The plateau’s glacial features included both kames [mounds], and eskers [snake-like ridges]. Some of these ridges, or eskers, were fifty feet in height and 100 feet in length. Between Fly Creek [which flows south into the Bonaparte River] and Green Lake, these ridges are well developed. George Mercer Dawson wrote that the old Brigade Trail followed the Fly Creek esker for miles — see his Report on the Area of the Kamloops Map Sheet, British Columbia [Ottawa: Geological Survey of Canada, 1895].

From the Chaine de Lacs it was another seven miles to the west end of Lac Vert — which Anderson also called Green Lake, Grand Lac, and Butte Lake. A few scattered Ponderosa pines were still seen at Chaine de Lacs and south of the lakes, but not northward, according to Anderson. “The P. Ponderosa extends on the northward to the vicinity of the Bonaparte; the last isolated members being observable at a point, noted on the map, near the Chaine de Lacs, a few miles from Green Lake.”

The trail led from the Chaine de Lacs [which includes modern day Hutchison Lake] to the west end of Green Lake, which Anderson described as a beautiful lake. 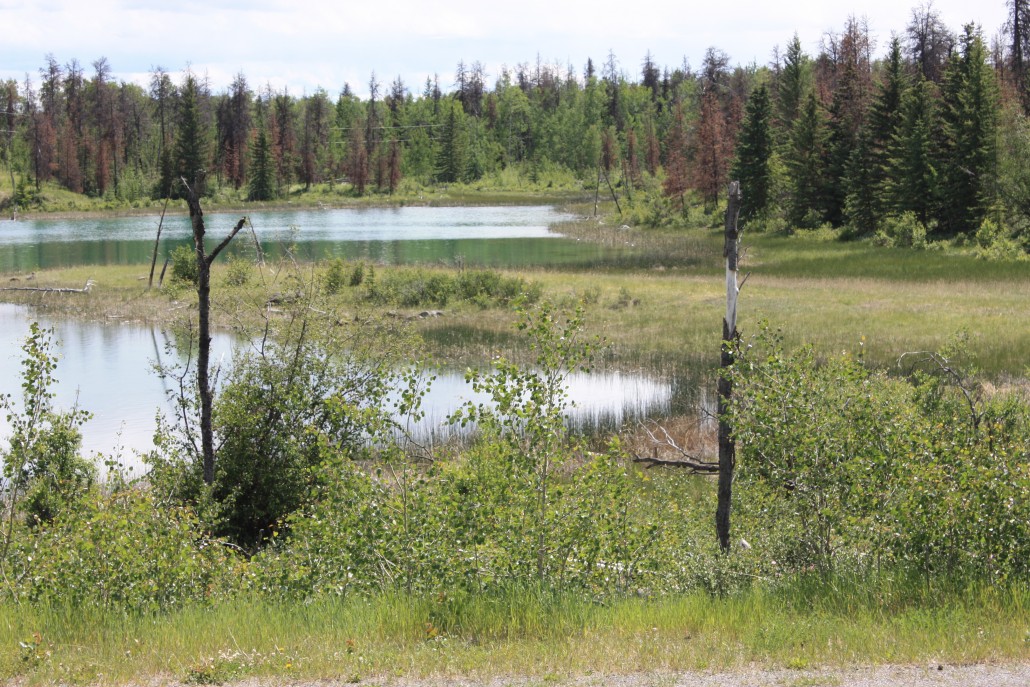 This is the marsh at the west end of Green Lake, British Columbia. We are looking south, toward Kamloops and Loon Lake, and the Green Timber is behind the photographer.

The Fly Creek esker to the Chaine de Lacs was not an easy trail to follow: at least not all parts of it were. It was not continuous, but had long gaps in its run. The edges were water-worn and sometimes rough. Some sections of the esker were flat on top, some were rounded: it was not always an easy travel for horses, especially when the pack animals descended from one section and climbed another. It also appears that there was little grass available for the animals to feed on: another important consideration for the brigaders. The story that follows tells of a later member of a pack train traveling over what he called the Green Timber. Probably he was finding his way along the Fly Creek esker:

On their travel we had to go through what was called the Green Timber, a drive of 25 miles in one day, as there was no feed till we got through, and it was very bad travelling. Our Bell Mare took a tumble here down a slippery rock slide, turned over a dozen times, and entirely demolished our valuable kitchen besides destroying the valuable large kettle of Beans we had cooked, so as to be ready as soon as we struck camp, which we knew would be very late. We spent about 21 hours picking up the ruins of our silver ware and utensils, and finally got  the old mare back on the trail, and found she was not badly hurt, but terribly skinned up. One of our Mules also rolled down and spilled her load, which was 300 pounds of Beans belonging to me, and although we got the mule back, with only a [stiffle joint] displaced, I left my beans scattered all along the mountain ride and no insurance. [Frank Sylvester, “The Old Brigade Trail in ’59.” Uvic Archives, Frank and Cecilia Sylvester family fonds, AR 281]

From the north end of the Fly Creek esker it is a relatively short distance to the west end of Green Lake, which Anderson seemed to call (on one occasion, at least) “Butte Lake.” In his draft manuscript, “British Columbia,” Anderson described this lake:

The Lac Vert, or Green Lake, so called from the sea-like tint of its waters. This lake, in length some thirty miles, is a beautiful sheet of water. Several streams run into it; but it has no free outlet. There is a slight subterranean drainage only, into the Bonaparte [River], a tributary of the Thompson. The water, therefore, kept within limits chiefly by evaporation, is brackish.

If you look at Anderson’s map, above, he calls the plateau to the west of Green Lake “the Green Timber.” To him, this plateau was not part of what he called the “Green Timber.” However, to Sylvester, who traveled over the brigade trail in 1859, this was the Green Timber, and today it is still called the Green Timber Plateau. For me, this has been very confusing, and I am pleased to have it finally straightened out. It is, however, interesting, how names move around, and how different persons called different places by different names, even though they were all in the territory at about the same time.

If you want to go back to the first post in this series, “Following A.C. Anderson around British Columbia,” go here: https://nancymargueriteanderson.com/hope-slide/

The next post will take a little exploration and research, mostly because of the Butte next to Green Lake. As I said above, the Cordilleran ice-sheet left behind both kames [mounds] and eskers [ridges]. Is this a mound? I ask this question because in the French language a butte is a mound.

Or is this an actual Butte — which I believe is a volcanic feature. There are other buttes in this area: Lone Butte, to the north, and Olsen’s Butte at the east end of Green Lake. Neither are anywhere close to where Anderson located “the Butte” on the shores of Green Lake. Did Anderson make a mistake, and mark the butte in the wrong place? That’s possible.

Of course, when I was at Green Lake I hadn’t even realized that “La Butte” was marked on his map, and didn’t look for it! At the moment I presume it is Olsen’s Butte he referred to, but I am not entirely comfortable with that presumption, as Olsen’s Butte is further east than this map seems to indicate. So you see the difficulty.

The next post in this series is here: https://nancymargueriteanderson.com/horse-lake/