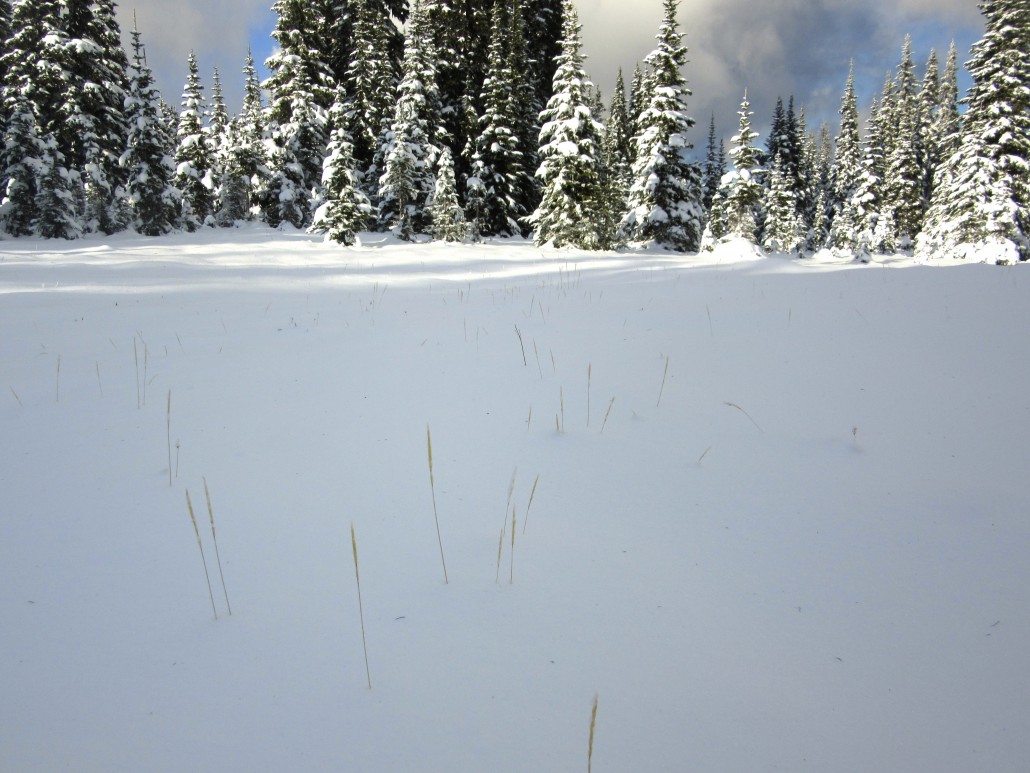 Grasses on the HBC brigade trail over the Coquihalla, under the snow (November 2015). Photo thanks to Kelley Cook, Hope Mountain Centre

An unlikely heading, perhaps, but one that is becoming of interest to some historians West of the Rocky Mountains.

But while I researched my upcoming brigades book, I discovered in the Fort Langley Miscellaneous Files, a list of grass seeds that were forwarded from Fort Victoria to Fort Langley. In which year we do not know, but the paper is watermarked 1850, and the date of the letter accompanying the shipment is “July 23.” [B.113/z/1, fo. 37, HBCA]

All of these grasses can be identified, more or less, except for “Cockefort Grass.” These are imported grasses, and not natural to the territory West of the Rocky Mountains. I believed — both because it was a special interest of mine, and because I knew that the men of the HBC brigades sowed grass on the edges of the brigade trail to feed the horses — that these grass seeds were forwarded to Fort Langley so that the men returning to the interior posts could seed the various campsites along the trail. I know that one of the problems the HBC men had to overcome at this time [1849-52] was the shortage of feed for the horses at newly-built Fort Hope. I thought these seeds could have come from the grasses already grown at Fort Victoria or Fort Nisqually [Tacoma, WA] which, because they were HBC posts, might have grown imported grasses from seed.

I forward herewith a small Requisition for various kinds of grass seeds which I beg may be forwarded by the first ship bound to this Island [Vancouver Island] — We entreat that the seeds may be fresh and of the best Kinds — I am informed that seeds put up for abroad are often mixed with inferior and damaged sorts — which would be serious disappointment in our case. These seeds should be put up in bags of convenient size, packing in tight casks and frequently aired in fine weather only, by a careful person, during the voyage to this country. That plan was followed by Mr. [Daniel] Harvey, with the seeds under his care, and succeeded better than any other that has been tried. [Daniel Harvey, a miller from Kent, worked in the trade at Fort Vancouver 1840-1850, and came out in the barque Cowlitz).

In July 1851, Douglas was able to report that: “There are now about eight acres of Timothy Grass at Fort Hope, and that or other kinds of grass, at every encampment on the mountains, in sufficient quantities for one or two nights consumption.” [Letter, Douglas to Barclay, July 22, 1851, Fort Victoria Letters, p. 201] More grass was needed, or perhaps the seeds did not do well. Obviously the seeds sown that year (or the year before) were not the same as those ordered by Douglas in April 1851. It also seems that the seeds shipped upriver to Fort Langley were not shipped in 1851, as there were no newly-arrived London ships in Fort Victoria in early July of that year.

I identified these grasses on an English website that sells grass-seeds. Our North American foxtail grasses are generally weeds called spear grass — but not so in England. For perennial and Italian rye Grass, Timothy, and the HBC’s “Foxtail” grass,  see this page: http://www.cotswoldseeds.com/seedmix/grass-straights

I didn’t identify Cow grass, but it could be any mix of meadow, turf, or pasture grass on this site. It would be a carpet or orchard grass, perhaps Meadow Fescue or any of the other fescues on the first page above.

But, did you notice? If you are really sharp, you would have seen that these pages also identify what I read as “Cockefort Grass.” It is Cocksfoot Grass, and a common grass in seed mixtures in England. Here is a little more information on this interesting grass: http://cotswoldseeds.com/seed-info/cocksfoot-black-sheep-grass-family

In October 1851 Douglas put in an order for vegetable seeds, and in this order he explained why such care was needed in order to get seeds to Fort Victoria in good condition. These seeds would come by the London ship to Hudson Bay, and the fall boat from York Factory — not the York Factory Express but a later boat sent to Edmonton House. They would spend the winter at Edmonton, and cross the mountains via Athabasca Pass with the passengers who would meet the outgoing York Factory Express at Boat Encampment. Hence, they would arrive at Fort Vancouver in spring and be in Fort Victoria in April, as Douglas states in his letter:

I have to request your attention to an order for Garden seeds herewith, which I beg may be forwarded by the way of York Factory, in the Bay Ship of 1852, as the sea voyage to this country by Cape Horn generally proves destructive to seeds. The weight of the whole order will not exceed two pounds, and if forwarded immediately from York Factory by the Sascatchewan [sic] Fall Boat, and afterwards as stated on the order they will reach this place in April 1853 early enough for sowing. [Douglas to Barclay, October 31 1851, Fort Victoria Letters, p. 225]

Updated: It appears that some of these grasses sown on the Tulameen Plateau still grow there. Harley Hatfield wrote, in his article “On The Brigade Trail,” published in The Beaver, Summer 1974, that: “The timothy and fall oat grass grown long ago for fodder — and some thistles that came in with the seed — were still growing at Campement du Chevreuil and at other places along the trail.”

There are quite a few grass seeds imported from England and grown by the HBC west of the Rockies. Colsa or coleseed was well established at Fort Nisqually in 1840. The modern day version of Coleseed is Canola, and we know it well in Canada! In the mid-1840’s, Fort Alexandria had both spring and fall wheat. All of these seeds must have arrived via the London Ships, and in the 1850’s the ships from London made their way west much more quickly than the London ships of the past years.

But it still seems as if there were problems getting grass and vegetable seeds safely to Fort Victoria. I wonder if the grass seeds survived their journey to the West, and if they reseeded themselves on the Tulameen Plateau every year afterward? Are these imported grasses still growing wild at Lodestone Lake, Horseguard Camp, or Encampment du Chevreuill? Obviously, more research is needed.

And are they imported? After all, Cocksfoot grass came originally from North America, the information says. But it certainly did not come from the West Coast, so as far as we are concerned it probably is an “imported” grass.

Did you know that the oats sown at the Chilcotin post still grow every year, about 150 years after the post was closed down? History is never in the past! I think you can even identify the early types of grains that were grown by the HBC in this post, from a brand new website designed by Richard Sheuerman, a writer in Washington State. I first heard of him when I did a little research on the Canadien horse. Here is his brand new site: http://newcolumbiacommons.com  Click on “Farm,” and on the page titled “Crops,” he lists the heritage grains he has found in his part of the world. Some of the early HBC crops are listed among them.