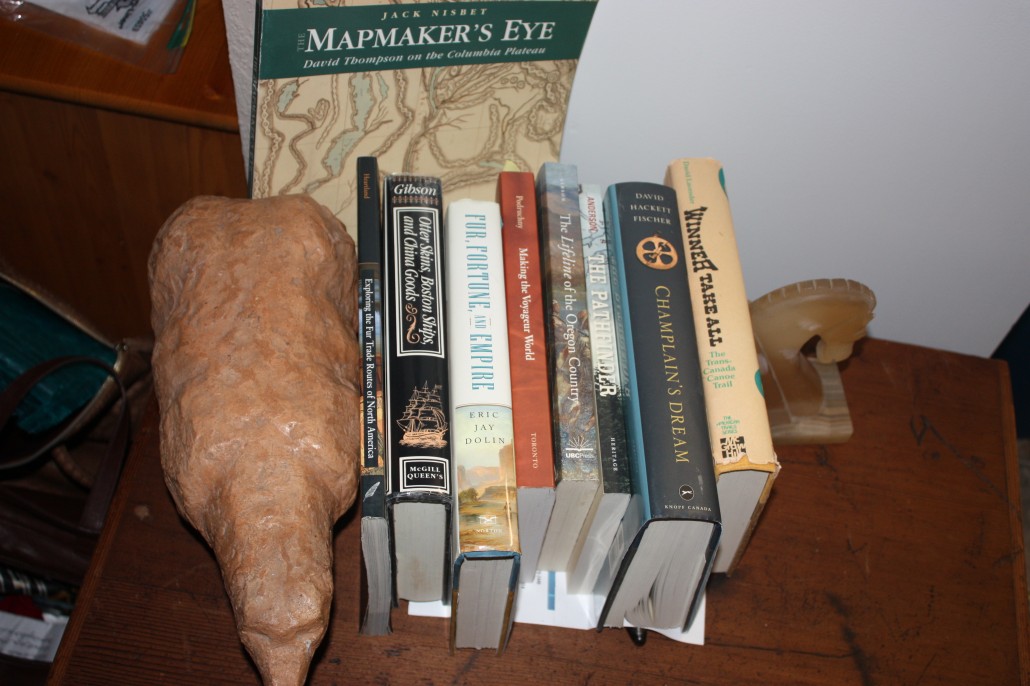 A guide to reading the fur trade

One of the people I talk to on Twitter asked me which books she should read to learn more about the History of the Fur Trade in Canada. Canada is a big country, and it has many fur trade histories. The list will never be a short one — nor have I read all the books available on this subject.

This is my list of reference and other books that everyone who is writing about the Canadian — and American — fur trade should read. Some of these are old books that you will only find in second hand books stores, or in the library. Some are published in Canada; some in the United States.

Winner Take All: The Trans-Canada Canoe Trail, by David Lavender [Toronto & New York, McGraw-Hill, 1977]. One of the best books ever! It takes you all the way from the early French explorers, across the country to the West side of the Mountains — and it is very readable.

Champlain’s Dream, by David Hackett Fischer [published by Random House & Albert A. Knopf, 2008]. This is the story of one of the earliest French explorers and fur traders in Canada and Eastern United States — it was the winner of the Pulitzer Prize and so will be easy to find.

Fur, Fortune, and Empire: the Epic History of the Fur Trade in America, by Eric Jay Dolin [New York: W.W. Norton & Co, 2010]. The story of the American fur trade — remember that the Brits and Americans met and clashed in Washington State.

Making the Voyageur World: Travelers and Traders in the North American Fur Trade, by Carolyn Podruchny [Toronto: U of T Press, 2006]. Are you a descendant of a voyageur and want to learn more of his traditions? This is the book for you!

The Saskatchewan, by Marjorie Wilkins Campbell [Holt, Rinehard and Winston or someone else, 1950]. You might have difficulty finding this book, but it is a good history of the fur trade of the North West Company, and that of the HBC, on the Saskatchewan and North Saskatchewan Rivers from the early days. Look for other books by her, too.

Fort de Prairies: the Story of Fort Edmonton, by Brock Silversides [Victoria: Heritage House, 2005] The history in pictures of Edmonton House. Also look for older books written by James G. MacGregor, who wrote a number of histories of Edmonton and the fabulous John Rowand.

Derek Hayes’ book about Alexander McKenzie’s 1793 exploration to the west coast of North America should come next. Its title is First Crossing: Alexander Mackenzie, His Expedition Across North America, and the Opening of the Continent [Vancouver: Douglas & McIntyre, 2001]. McKenzie was the first of the Nor’Westers to cross the mountains to the Fraser River. The book is easy to find in your local library, but it should also still be in the bookstores too.

Simon Fraser is the next to penetrate the area West of the Rockies, and my books on him are also packed away. His history is easy to find, however. I will list these books in a future post.

Jack Nisbet has written a number of books about the North West Company explorer and geographer David Thompson, who crossed the mountains to build Kootenais House near the headwaters of the Columbia River (British Columbia), and then moved south to Idaho, Montana, and Spokane. Sources of the River was his first, and Mapmaker’s Eye: David Thompson on the Columbia River, his complete history. These are essential reading for the fur trade West of the Rockies.

In addition to this, McGill University Press, U of Washington Press, and the Champlain Society, in association with the Centre for Rupert’s Land Studies at the University of Winnipeg,  is bringing out a three volume issue of The Writings of David Thompson: The Travels, 1850 version. I have Volume 1, the other two are not yet published.

Trading Beyond the Mountains: The British Fur Trade on the Pacific, 1793-1843, by Richard Somerset Mackie [Vancouver: UBC Press, 1997] is an essential for readers of history west of the Rockies. What happened here differed from what happened on the east side.

The Lifeline of the Oregon Country: the Fraser-Columbia Brigade System, 1811-47, by James R. Gibson, is an excellent record of the brigade trails (which I also write about) up to 1847. He also wrote a book on the Boston Ships that traded up and down the west coast of North America in the years before 1840, which is an excellent book to find (Mine is packed away, & I will list it in a future post).

I guess you can say this is now Shameless Self-Promotion, but my book is the only book I have found so far that covers the history of Washington State and New Caledonia (in modern day British Columbia) between the years of 1843 and the 1850’s. A lot of history happened in those years: the Americans flooded west over the Oregon Trail and threatened the fur trade of the Columbia. The missionaries came west too, and the massacre of the missionaries at Waiilatpu Mission (Walla Walla) changed the New Caledonia fur trade routes forever. The 1843 brigade trail is not mentioned in James Gibson’s book about the brigades either. But all this is recorded in my book, The Pathfinder: A.C. Anderson’s Journeys in the West [Victoria: Heritage House, 2011]. So my book, and future books that I am writing on this very subject, should be added to essential reads for history on the West side of the Rocky Mountains.

So there’s my short reading list for learning the history of the fur trade in Canada, and especially West of the Rocky Mountains. There are many more books of course, but my interest is in early Washington State and British Columbia (though that fur trade spilled to the east side of the Rockies every year, in the York Factory Express). Remember — the fur trade built this country, and the United States too, and so fur trade history is important to all of us.

2 thoughts on “Reading the Fur Trade”