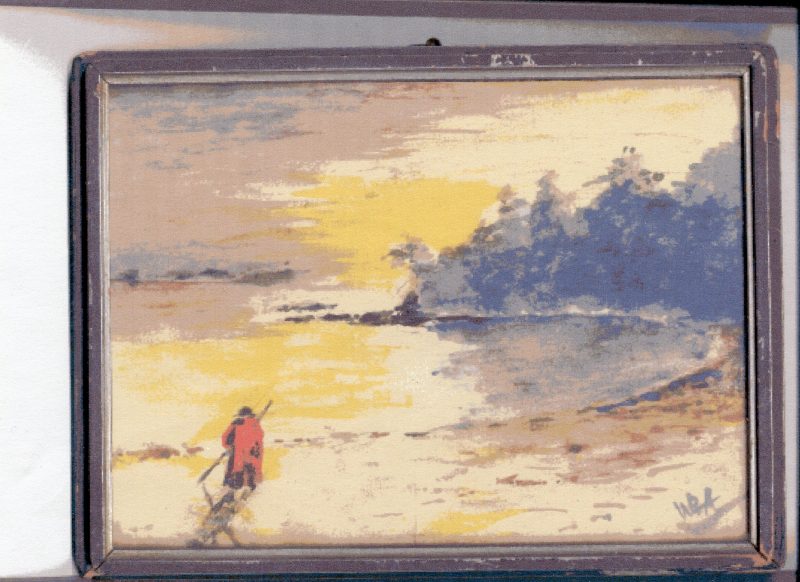 This painting was done by Alexander Caulfield Anderson’s son, Walter Birnie Anderson, who was a member of the B.C. Police in the Comox area. He may have painted it while he was employed at Port Simpson, working as the Federal Government’s Indian Orchard Inspector.

At the very end of August, 1834, the HBC ship, Dryad, carrying Peter Skene Ogden, William Fraser Tolmie, Dr. Alexander Kennedy, and all the other men who were employed at the old Fort Simpson [Fort Nass] located at the mouth of the Nass River, arrived in McLoughlin Bay, where the new Fort Simpson was just being established near the mouth of the Nass River estuary [Portland Channel.] This new Fort Simpson would eventually become the headquarters for the HBC on the northwest coast, and it would play an important tole in the HBC’s fur trade history for many years to come.

This is my fourth blogpost in the series about the establishment of Fort Simpson. The first post of the series will be found here, if you wish to follow the whole story: https://nancymargueriteanderson.com/fort-simpson-2/ So, let’s continue the story from the third story in the series.

On September 11, 1834, the HBC men finished roofing the bastions and got the cannons hoisted up, according to the Fort Simpson Post Journal as kept by my g.g.grandfather James Birnie. On Saturday, September 16, the Post Journal recorded that the HBC men “finished enclosing the fort. The lower stories of the bastions being put up. Gates locked at night. Blacksmith employed since Wednesday making small axes and at sundry other jobs connected with the gates…. A dram given to the men tonight.” The dram, of course, and as always, celebrated the completion of the new fort.

The Fort Simpson Post Journal also recorded that Couguele, one of the Nisga’a chiefs mentioned by William Fraser Tolmie in a previous blogpost, arrived at the new Fort Simpson, “bringing in his canoe the flap of gate left at Nass, iron works are complete, together with a ladder, two water spouts, and a batch of [illegible] which had been abandoned.” Couguele is working hard to keep in the HBC’s good graces, always a good thing if you want to trade with them in the future. But also, wisely, he knew he would be paid for these items, even if the objects were not of much use to the HBC men.

On September 17, the HBC men obtained clay to build a stone chimney in the dwelling house, and Peter Skene Ogden sailed in the Dryad for Sitka, to discuss with the Russian commander the refusal of the Russian American Company to allow the HBC men to ascend the Stikine River to build their post, as they were allowed to do by agreement with the Russian government.

On September 30, both James Birnie and Alexander Kennedy took possession of their new houses. On October 4, the Fort Simpson builders laid the foundation for the men’s houses. The work of making Fort Simpson a functional and comfortable post was almost complete.

No First Nations men appeared at the new Fort Simpson, except for a man named Neshot, who came “with boards &c for building here, which we have taken every means to dissuade him from, but without effect.” Of course a reward was expected, Birnie complained. “The fellow will be a constant pest.”

On Friday, October 14, the Dryad arrived back from Sitka, where Ogden had gone to speak with the Russians. On October 17, the men at Fort Simpson raised its HBC flag and the Dryad saluted it with five guns. On Tuesday, October 21, “in the evening, the passengers amounting to 22 men were ordered on board with their baggage, which reduces our number to 30 men.” My great-grandfather, Alexander Caulfield Anderson, was one of the men ordered aboard the ship. (He would leave his future wife behind him at Fort Simpson.)

For a few days the Dryad was delayed in the bay by contrary winds, but finally, on October 23, the Fort Simpson post journal recorded that “the Dryad weighed anchor about 9 o’clock am and was soon out of sight.”

The men aboard the Dryad had a rough ride down the coast to Fort Vancouver. In December 1834, Chief Factor John McLoughlin was still anxiously awaiting the ship’s arrival at the fort, particularly as he had not heard anything from Peter Skene Ogden since May, and he had no idea what, if anything, had gone wrong. On December 22, however, he was happy to report to William Kittson, at Fort Nisqually, in Puget Sound, “that Mr. Ogden arrived here a few days ago, all safe, but has not built at Stikine as the Russians opposed him, and the easterly winds prevented his paying you a visit.” According to another letter written to James Murray Yale at Fort Langley, the Dryad also did not visit that place on its return journey. “The fact is,” McLoughlin reported, “that the latter was detained till November on the coast and in consequence of the Eastern wind being set in could not proceed to your place.”

So where was the Dryad for such a long time? It had left the Northwest Coast in late October and it was now early December. We have the answer here: In his Narrative of a Journey Across the Rocky Mountains to the Columbia River [Corvallis, Oregon State University Press, 1999, p. 134], John Kirk Townsend tells us that in December, at Baker’s Bay at the mouth of the Columbia:

On the morning of the 11th, Mr. Hanson, the mate, returned from the shore, and reported that the channel was smooth; it was therefore deemed safe to attempt the passage immediately. While we were weighing our anchor, we descried a brig steering towards us, which soon crossed the bar and ran up to within speaking distance. It was one of the Hudson’s Bay Company’s coasters, and as we were getting under way, a boat put off from her, and we were boarded by Mr. Ogden, a chief factor from one of the Company’s forts on the coast. He informed us that the brig left Nass about the first of October, but had been delayed by contrary winds and rough, boisterous weather. Thus the voyage, which usually requires but about eight days for its performance, occupied upwards of two months. They had been on an allowance of a pint of water per day, and had suffered considerably for fresh provisions. Mr. Ogden remained with us but a short time, and we stood out past the cape.

But during this journey down the coast from Fort Simpson, Alexander Anderson and Peter Skene Ogden got to know each other very well: the fact that Anderson’s aunt (and numerous other Anderson family members) was a member of the Skene family in Scotland probably helped to make the connection. Peter Skene Ogden was not a Skene, but his own father was very close to members of the Skene family in America, and so gave young Peter his middle name.

Ogden and Anderson, and all the other men aboard the Dryad who were sailing south from Fort Simpson, eventually reached the HBC headquarters at Fort Vancouver. Ogden reported on what had happened at Sitka to Chief Factor John McLoughlin, while  Anderson once again began work as a clerk in the fort office, under James Douglas. There he would remain until the spring, where once again he joined Peter Skene Ogden in another adventure — this time travelling north to New Caledonia with the Brigades.

Of course you know what the result of the Russian American conflict with the HBC was. But perhaps you do not know the entire story: certainly I didn’t when I wrote my book, The York Factory Express. I had all the information, but I hadn’t put it together because it had nothing to do with the York Factory Express (or so I thought!) The letters and reports that McLoughlin gathered together after the incident were sent out to the annual meeting with Governor George Simpson at Red River in 1835 (which may account for the early start of the York Factory Express from Fort Vancouver that year). And who was the leader of that particular Express? It was James Douglas, the chief clerk under whom Alexander Anderson was employed. It is clear from his York Factory Express journal that he was in a rush to get to Red River and report to Governor Simpson.

Governor Simpson immediately forwarded all the reports to the Governor, Deputy Governor, and Committee of the Hudson’s Bay Company in London. They took immediate action, by contacting the British Government and opening discussion on this abuse of a legal agreement signed by both the British government and the Russian government. At least I believe the British government was involved in this discussion, because when agreement between the two fur-trade companies was finally reached in 1839, Lord Palmerston was one of the gentlemen in London who — according to Governor Simpson himself — would receive notice that “the claim made by the Hudsons Bay Company on the Russian Government founded on certain proceedings that took place at the mouth of the Stikine River on the North West Coast of America in the year 1834 has this day been compromised and satisfactorily adjusted by us acting respectively on behalf of the Hudson’s Bay Company and the Russian American company.” Lord Palmerston was Henry John Temple, 3rd Viscount Palmerston, twice Prime Minister of Britain some years later, but in the years 1835 to 1841, when this issue was brought to the notice of the British Government, was the British Foreign Secretary.

And so this blogpost ends the Fort Simpson series. And you, my readers, will notice I am feeling better. I have been diagnosed with a rare auto-immune disease wherein my immune system destroys my red blood cells. I’m fine. I already feel better, and it is being dealt with and might absolutely disappear. It is not to say that I will be immediately attacking my more complicated blogposts to come, but I will get to them eventually. Thanks for being patient with me.

5 thoughts on “Home from Fort Simpson”