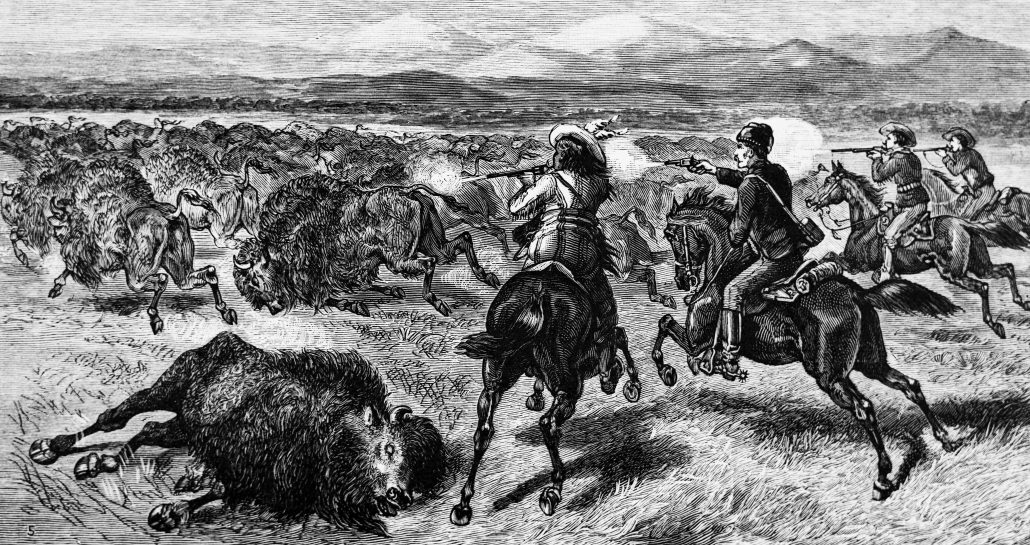 Fort Pitt was a provisioning post, constructed in 1829-31, 217 miles downriver from Edmonton House. Before this post was built, the men of the outgoing Saskatchewan Brigades (which included the York Factory Express men) had to travel a full 431 miles downriver to Carlton House without having any post that could supply them with provisions. As you can imagine, before this provisioning post was built, the men of the York Factory Express and the Saskatchewan Brigades had to hunt for their food. Yes, there were bison in plenty on this part of the prairies, but hunting delayed them on their journey to Norway House and York Factory. They were on a tight schedule, and had little time to spare.

As I say in my book, “The York Factory Express,” in 1828 Edward Ermatinger left Edmonton House on May 20… with the Saskatchewan Brigade of sixteen boats laden with about eighty pieces per boat.

Six days later he reached Carlton House, 431 miles downriver from Edmonton House. Later parties no longer hunted for provisions, but stopped at the new post of Fort Pitt, which was placed (but not yet built) on top of a high bluff on the north side of the river, almost equidistant from Carlton and Edmonton House. For the first winter its traders lived in tents. Work began on the buildings in 1830, and by 1831 the main part of the small but sturdy post was finished. Although it was closed temporarily for fear of Indian attacks, in later years Fort Pitt was fully capable of defending itself against the ever-battling Cree, Assiniboine, and Blackfoot warriors, whose territories merged near its location.

Fort Pitt traded with the First Nations people for bison meat and hides, and pemmican: it was not a fur trading post at all. At Fort Pitt, the express-men took in provisions for their downriver voyage to Carlton House, 214 miles downriver. Generally (but not always) this took the form of pemmican, which was a mix of dried and pounded bison meat, with boiled bison fat and local berries, all stirred together and wrapped in skin casings with the hair still on. I describe Pemmican in this post: https://nancymargueriteanderson.com/pemmican/

Wind, weather, and the depth of the North Saskatchewan River were important considerations in the downriver journey: all of these could affect the length of time it took to reach Fort Pitt and Carlton House. From Edmonton House it took George Traill Allan’s party two days to reach Fort Pitt in 1841, and two more to make Carlton House, with no mention of the weather. In 1847, Thomas Lowe’s men rowed against a headwind for one day, and although the next day they had a fine sailing wind, it took them three days to reach Fort Pitt. Beyond Fort Pitt he found the river low, and they lost time running aground on the battures [gravel bars]. In 1848, high water and a good sailing wind for the first two days helped Lowe reach Fort Pitt in good time, but beyond that place his brigade was windbound for one full day, and delayed by snow another. It took Lowe eight days to reach Carlton from Fort Pitt. Even though the North Saskatchewan River flowed eastward with them, the high flaring sides of the York boats caught any wind from the east and slowed their headway.

So, let’s see what the York Factory Express men had to say about Fort Pitt. Because Fort Pitt did not exist in 1826, Aemilius Simpson did not mention it. Nor did Edward Ermatinger in 1827 and 1828. However, Ermatinger had reason to be very familiar with the future location of the post, as I believe this is about where Finan McDonald was attacked by the bison bull — story told in this post: https://nancymargueriteanderson.com/seventh-leg/

George Traill Allan first saw the post in 1831, when it was in the command of Mr. Patrick Small, “who received us kindly.” This Patrick Small was the Métis son of the North West Company partner Patrick Small, who was the brother-in-law of explorer David Thompson. In his 1841 journal, Allan has very little more to say of it. We learn, however, that Mr Alexander Fisher was in charge of the place, and that Patrick Small had been moved downriver to the charge of Carlton House.

James Douglas described his arrival at Fort Pitt in 1835:

Tuesday [May] 5. Fort Pitt. The weather exceedingly cold and unpleasant. We arrived here just in time to escape a heavy storm of hail and snow which continued to pour down upon us for nearly a full hour. Here are 40 tents of Cree Indians encamped around the fort apparently with the view of being protected against any sudden attack of their enemies.

Their enemies in this case were the Sarcee, who they had stumbled across and attacked out on the open prairie. The Sarcee were friendly with the Blackfoot, and so “the whole Cree tribe are now living in continual alarm and are just on the wing for a flight to the strong woods where they may live in perfect security.” On his return journey, he said this:

Thursday, September 10: Left Fort Pitt this morning at 9 o’clock with only one boat pretty strong manned…. to proceed on ahead of the brigade to Edmonton.

So one has the impression that Fort Pitt was small and not particularly impressive. Thomas Lowe said this in 1847:

Monday 24th [May]. Fine weather, but light contrary wind. Reached Fort Pitt at 3 pm where we found the Brigade of boats which had started before us from Edmonton.

On his way back he arrived at Fort Pitt on horseback from Carlton House, and left it also on horseback on his way to Edmonton House. In 1848, he wrote:

Saturday May 27: Weather still very cloudy. Arrived at Fort Pitt immediately after breakfast, where we found that the 13 boats which had started from Edmonton on Tuesday had only arrived about two hours before us. Had our boat hauled up and repaired. Several packs wet.

Sunday. Blowing very strong up the River. Bishop [Modeste] Demers had Divine Worship in the Fort during the day.

May 29, Monday. Fine weather. Started from Fort Pitt after breakfast. The brigade was here increased by 3 boats, making now 21 in all. Each boat had 4 men, including the steersman, and a cargo of 70 pieces. Made a good distance.

All these “pieces” weighed about 90 pounds each, so you can take a guess at how many furs there were in each of these packs. On his return journey Lowe again travelled by horseback between Carlton House and Fort Pitt, where he waited for the boats to arrive:

Tuesday September 5. Breakfasted at English River. The boats had a fine fair wind most of the day. Started ahead after breakfast for Fort Pitt, and arrived there about 5 pm after which the wind came ahead.

September 6, Wednesday. Strong head wind all day for the boats, and they did not arrive at the Fort.

September 7, Thursday. Shortly after breakfast the boats arrived. They were windbound the whole of yesterday. Had the Outfit taken out (more than 100 pieces). As the water is very low the whole of the 8 boats are to go up (although it is usual to leave one here) they start from here with 65 pieces per boat.

John Charles’s journal tells more about the dangers that existed along this section of the North Saskatchewan River. The HBC men were very cautious when there were Blackfoot roaming! This journal is from 1849:

Tuesday May 29th. Drifted all last night. Weather very warm. Arrived at Fort Pitt an hour before sunset. We found here upwards of twenty boats awaiting our arrival. Report of Blackfeet prowling about the vicinity of this Fort and their intentions to molest us on our way down to Carlton.

Thursday May 31st. The Saskatchewan Brigade of twenty five boats laden with the returns of the Upper establishments left Fort Pitt about 8 am. Sailed towards evening.

One of the things that the men of the Saskatchewan Brigades and those of the York Factory Express would have noticed as they approached and passed Fort Pitt, is that the North Saskatchewan River gathered strength and pushed against them more strongly than it had done before. In late August to mid-September, when they were making their homeward journey, the river was shallower than it had been in the spring. In the area around Fort Pitt, it was also a much narrower river. But one of the things I especially noticed in the various journals I read, in that the gentlemen who kept the journals were exhausted, and eager to get home. They had left Fort Vancouver in late March, and rushed down the river in May when the water was high. Now, in September, they were on their way home. If the men came from Edmonton House, they were already almost home, having been on the rivers since May — four months away from home. But the York Factory Express men, whose journals we are reading, left Fort Vancouver in late March, and have been away from home six months by the time they reach Fort Pitt in September!

Today, Fort Pitt is a National historic site under Parks Canada. In spite of the fact it does not appear to be a significant post in the time of the York Factory Express, it certainly played an important role in later history and during the 1885 Rebellion. It is interesting who was here during this time: for example, in 1883, the son of Charles Dickens, Francis Jeffery Dickens, was at the fort, in command of 25 North-West Mounted Police. Before that time, the post was a stopping place for the historic Carlton Trail, the overland route between Fort Garry and Fort Edmonton. Notables such as explorer John Palliser, geologist J. B. Tyrrel, and artist Paul Kane would have travelled through this fort.

Fort Pitt is also near Frenchman’s Butte, which is a significant historical site for the role it played in the Battle of Batoche. Today it is 10 acres of land on the west bank of the North Saskatchewan River, about 40 kilometers north of Lloydminster, in Saskatchewan. There are a few attractive photographs and drawings of this post in the Saskatchewan Archives (which is a good archives for illustrations in this part of the world). One of these photographs will be in the York Factory Express, even though it has little to do with the Saskatchewan Brigades.

If you wish to order “The York Factory Express,” you can do it through my publisher, here: http://ronsdalepress.com/york-factory-express-the/ Although I have told you it will be out in spring, it won’t be — I expect it will be published in fall 2020. Covid-19 has probably played a role in this delay, as of course the publisher’s staff-members were unable to work. So, be patient, please. I can see how the book is progressing, and I am learning a lot about publishing, that I was not taught when my first book was published! Just so you know, this is a good publisher! I just mailed him my third manuscript for consideration, so that tells you a lot of what I think about this company.