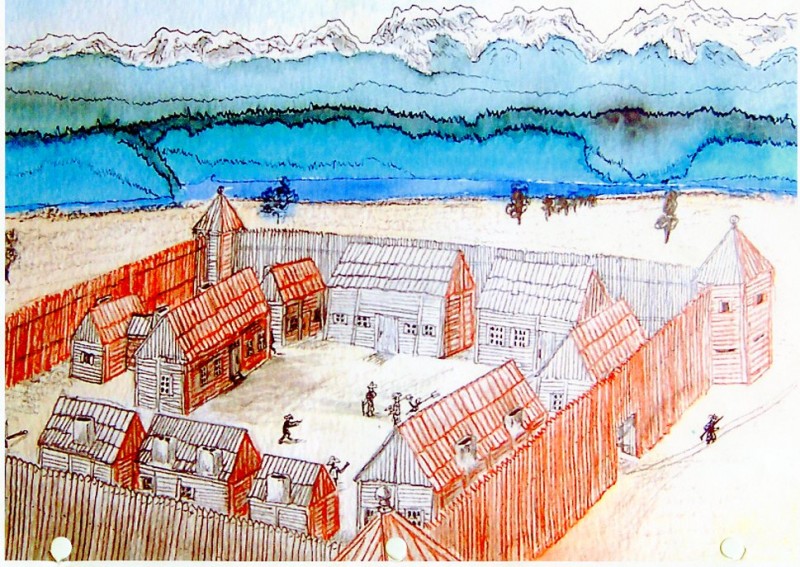 Fort Durham might have looked much like Fort Nisqually (shown above), although it was probably smaller, and had only two bastions, which did not provide good protection against the many Fort Durham dustups that occurred over the three years of its existence. This drawing of Fort Nisqually was done by Steve A. Anderson and is used with his kind permission.

What stories the HBC men had to tell of Fort Durham dustups, or conflicts with the First Nations people that surrounded it! It seems that every HBC man who served at that isolated post was more than eager to get away from the place, and not only because of the weather (although that certainly contributed to their eagerness to get away).

Fort Durham was built on the northwest coast in June 1840, and was the scene of more than one dustup with the Tlingit people. As Roderick Finlayson wrote in his “History of Vancouver Island and the Northwest Coast,” “As soon as we got our fort secure at Tako [Taku/Fort Durham], we opened trade with the Natives… In dealing with them, for they were numerous and strong, we only allowed two or three within the Stockades at a time.”

One of the first problems the HBC men had to overcome was that the Tlingits that surrounded Fort Durham believed that the HBC men were Americans. The HBC’s problems began immediately, and this is the story of the first Fort Durham dustup. As Finlayson wrote, the Tlingit, “supposing we were Americans, they tried to take revenge for this by attempting to take the fort and murder us all. With this in view, a warrior attempted to force his way in at the gate, where a number of others were watching. The gate keeper, a Sandwich Islander, did all he could to keep the men out but failed, when I went to the rescue, having pistols in my belt, and forced the fellow out. In doing so I was struck by a bludgeon, and in the heat of passion I went outside the gate where I was laid hold of by a party of the wild savages, and forced away to a distance from the gate, when I called out to open blank cartridges from the cannonades in the bastion to frighten them.” This, from his “Autobiography.” In his “History,” Finlayson wrote this of the same incident:

One day several Indians forced themselves in at the Gate, which was partly opened to allow them who had traded to go out, and overpowered the Gate-keeper, when I had to go to the rescue. In attempting to put a strong fellow out, he struck me a severe blow, which enraged me so much that I imprudently followed him out and struck him with the butt end of my pistol. I was at once seized by about fifty of these wild savages, dragged by the hair, my clothes torn off, and carried away toward the harbour where their canoes lay. I at once called out to Dr. Kennedy to fire blank cartridges from the big guns, which he did. The noise frightening them, they allowed me to escape. After this, and in order to show them that our rules had to be obeyed, we closed the gates and stopped trade until they paid a certain price in furs for the outrage. After considerable delay and hesitation they paid what was demanded and the trade went on as before.

Dr Kennedy was Dr. John Frederick Kennedy, born in 1805 of a HBC man and his First Nations wife. Dr. Kennedy began his HBC career as a surgeon aboard the Isabella, and later served as surgeon at Fort Vancouver. The Isabella was, of course, lost on the bar of the Columbia River in May 1830, and he served as surgeon at Fort Vancouver during the time that malaria was so bad in the region, and in his work impressed Peter Skene Ogden (who as we know was sickened by the malaria while at Fort Vancouver), and Governor Simpson himself. He spent much of his time during his HBC career at Fort Simpson, on the northwest coast, before being transferred first to Fort McLoughlin, and then Fort Durham. He became Chief Trader in 1847, and was retired from the Company in 1856 because he had “fallen into habits of intemperance.” He died three years later at his Burnside home outside Fort Victoria. I wonder if anyone knows where his Burnside Road residence was?

So going back to Finlayson’s “Autobiography,” he had a little more on this Fort Durham dustup — a more detailed story about his rescue. After he was hauled away from the fort gates by the Tlingit men, he called for help from Dr. Kennedy, who responded as above. Finlayson’s story continues:

In the meantime I managed to get my back to a tree, drew my pistols from my belt and threatened to kill the first man that attempted to lay hold of me. My face was covered in blood and otherwise badly hurt. The firing from the bastion frightened the fellows off, so I was enabled to return to the Fort. After this we were besieged for several days, preparing ourselves for action, and the natives finding trade suspended came to a parley, when it was arranged that on payment of the insult to me, who was not a Boston (as the Americans were called) [being] explained to them, they agreed to pay in furs, a large bundle of which were brought as payment and accepted, peace declared and trade resumed.

One of the problems and dangers of this place, according to Roderick Finlayson, was the fact that these First Nations people had large numbers of slaves — up to a hundred of them to every First Nations chief! “In those days,” he wrote,” the Slave trade was carried on among the Natives to a large extent along the Coast…

so that each chief had from 50 to 100 slaves bound to his bidding on pain of death, which made them very dangerous customers. Those slaves were generally purchased from the natives of Queen Charlotte’s Islands,  who being the most determined and venturous tribe along the Coast, and having the larges canoes and best arms…

It seems that a page is missing from this document, so I cannot finish this particular story. But Finlayson’s story does continue: “I then passed a dismal winter at Fort Durham,” he wrote. “In the autumn of 1841 a young gentleman from England arrived in the ship taking our supplies, who took my place at Taco [Taku/Fort Durham], when I was directed to proceed to Fort Stikine (now Wrangel) and much pleased to be relieved of my duty at Tako.”

I knew this man was not Thomas Lowe, who left Dundee August 21, 1841, and arrived at Fort Durham on the afternoon of Saturday April 23, 1842. By consulting the book, A History of Fort Durham: the Hudson’s Bay Company trading post located in Taku Harbour, 1840-1843, within the boundaries of present day Juneau, Alaska, by Wallace M. Olsen [Juneau: Heritage Research, 1994], I discovered this young gentleman was John O’Brien, who later worked under Robert Campbell at Frances Lake, alongside Pierre Pambrun Jr. I also found O’Brien mentioned in Thomas Lowe’s 1847 York Factory Express journal. I have written about this man, and my story is found here: https://nancymargueriteanderson.com/john-obrien/

I don’t yet have John O’Brien’s document, and so can’t write much about the one year he spent at that place. Nor do I know if he witnessed a Fort Durham dustup while he was at the post. O’Brien was replaced by Thomas Lowe in April 1842, and Lowe left plenty of information behind him. Lowe tells of more than one Fort Durham dustup, in fact. Much of this information was secondary as he left no journal but, instead, corresponded with British Columbia historians in the late 1890s, long after he had retired to Scotland. I am presuming that Thomas Lowe might have kept the Fort Durham journals while he was there, but alas, they are missing! What an adventure it would be to read them.

So now we will look at Thomas Lowe’s letters to find out more about any Fort Durham dustup that happened while he was there. Lowe spent a year at Fort Durham: the last year of the fort’s existence. As noted above, he arrived in April 1842, a day when the weather was beautiful. I’m sure it didn’t last, but in later years Lowe didn’t complain much about the weather. He was more concerned about the First Nations men that surrounded the post. “The natives at that time were a numerous and rather dangerous lot,” he wrote, “and it was found after a few years trial that it did not pay to keep up such a strong force of men as was necessary to safeguard the Fort.” His letter, written October 1897 in Scotland, continues:

Dr. John Kennedy was in command, and while I was there we were besieged by those rascals for a period of six weeks, and only released by the opportune arrival of an armed Steamer from Sitka. During the siege they frequently attempted to burn us out. Knowing that the houses inside the stockade were covered with sheets of cedar bark, a very inflammable material in dry weather, they would muster on the windward side of the Fort during a gale and toss up lighted pieces of bark so as to land on the roofs and set them on fire. We had therefore to be on the alert against their machination[s], both by day & night. A chief named Analtass [?] took a very active part in these proceedings. He was a great orator, and was continually haranguing his own people and inciting them to hostilities. The Medicine men also kept constantly beating their drums, firing their guns, whooping & yelling and going through all sorts of antics.

So, we have another Fort Durham dustup or two, and they will continue. For a young man straight from Scotland, this must have been an eye-opening experience!

When the remainder of Thomas Lowe’s story is published, it will appear here: https://nancymargueriteanderson.com/fort-durham-closure/

To see the beginning of the Fort Durham story, go here: https://nancymargueriteanderson.com/fort-durham/

To see the beginning of Thomas Lowe’s story, go here: https://nancymargueriteanderson.com/thomas-lowe-3/ This is the journal of his voyage via London Ship from the Thames River to the northwest coast and Fort Durham.

If you want to order The York Factory Express, in which Thomas Lowe’s two journals play an important role, you can order a signed copy from me (via Contact sheet), or the publisher at: http://ronsdalepress.com/york-factory-express-the/ Thank you!