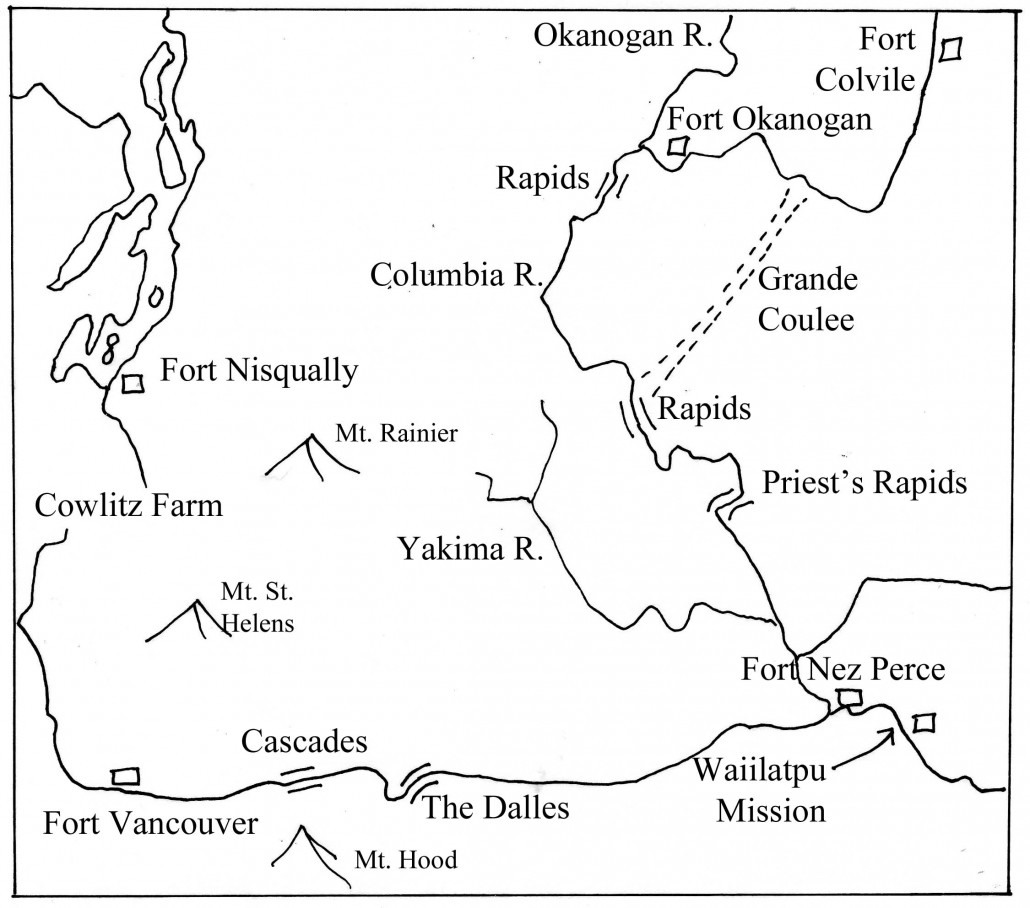 As always, the main party of the York Factory Express began its journey at Fort Vancouver, on the Columbia River, shortly after March 20th every year. It was a tradition that every man, woman and child in the fort came down to the river bank to wish the express-men goodbye. It would be a long journey. They departed in mid-March and normally returned to Fort Vancouver in early November — more than seven months later.

Ermatinger’s journal began with these words: “March 1827. Tuesday 20th. Fair weather. The Express Boat leaves Fort Vancouver at 1/4 before 6pm. A second Boat accompanies us as far as the Chutes to assist in carrying our Boat over them and to strengthen the party… Proceed 3 miles and encamp.” Traditionally the voyageurs received their regale of rum the first night out, but the express-men also camped close to headquarters so a man could be sent back to pick up anything they had forgotten to pack in the boat.

The next morning the men sported hangovers, but they set out at their normal early hour, just as the coming dawn made it light enough to see. They stopped for breakfast five hours later, often at their traditional resting place twenty eight miles east of headquarters.March, “21st. Embark at 4am. Breakfast at the upper end of Prairie du The. Head wind strong all day. Encamp at the end of Portage Neuf… Patches of snow along the banks of the River.” Fort Vancouver was now some miles down the river, and it would be months before the men saw their home again.

The first major hurdle the express men faced was the Cascades Portage, where they pushed their way through the range of mountains east of Fort Vancouver. The Cascades was a foaming chain of rapids that rushed toward them around a sharp bend in the river. At the portage’s base they emptied the boats and tracked them upriver with lines. The provisions and trade goods they portaged over the narrow, slippery four-mile trail along the river bank.

“22nd. Rain most of the day. Clear the Cascades Portage by 1/2 past 11 o’clock. Sail and paddle the rest of the day. Encamp a little below Cape Horn at 6 pm.” Cape Horn, which got its name from the fact the wind blew fiercely there, stood on the Columbia’s south bank 72 miles above Fort Vancouver and across the Columbia from the mouth of Klickitat River.

“23rd. Start at 5 am. Breakfast below the Dalles (discharged part of our baggage) at 6 pm.” The fur traders continued to push their way upriver through the mountain range, and the Grand Dalles was their next major barrier. In 1826 Aemelius Simpson, then a new-comer to the fur trade, described the Dalles as “a long & intricate chain [of rapids] rushing with great force though a number of narrow & Crooked channels, bounded by huge Masses of perpendicular Rock, the faces very much fractured…” To pass by these rapids the men used a nine-mile long portage which generally took them an entire day to traverse. Somewhere along this portage, the countryside changed from the lush forestland of the coast, to the dry desert of the interior, so quickly it was as if a fine line was drawn in the dust. Rattlesnakes sunned themselves on the rocks, and the men must watch where they stepped.

The Dalles was followed by the Chutes, that forced the rushing river into a narrow rocky passage where it fell 20 feet almost immediately and continued to tumble down rocky rapids as it carved its way to the Pacific. These men were heading upriver from Fort Vancouver, however, and they avoided the hazards of the Chutes by portaging both loads and boats on their shoulders over a narrow trail along the river banks.

“24th. Fine weather. Start at 5 am. Pass our Baggage and Boat and clear the Chutes portage by 11 am.” They took only one boat across the portage. “The other boat and crew return to the Fort. Hoist sail with a stiff breeze. Dr. McLoughlin and Mr. McLeod remain behind to hire horses to carry them to Walla Walla [Fort Nez Perces]. Encamp 3 miles above [John] Day’s River at 5pm, having waited for the Doctor and Mr. McLeod who were unable to procure horses. They left [Jean Baptiste] Ouvré with Indians who had sent for horses which he was to bring up. He arrived after dark with 5 accompanied by 2 Indians. Being ahead of the Indians, escorted only by Baptiste, a slave, he was attacked by 4 others who wish to pillage him. They, however, cut them off and took their arrows away from them which Ouvré brought with him as the spoils of war.

“Sunday 25th. Fine weather. We are unable to agree with the Indians for the loan of their horses, therefore the gentlemen walk by turns to lighten the boat which is insufficient to carry all the baggage and 6 passengers plus an extra man and the Indian Slave. Proceed at 1/2 past 5. Hoist sail with a light breeze which continues all day. Assist with the Poles and Paddles. Encamp about 6 miles below the Gros Isle.” This is the fur traders’ Big Island, or Blalock Island.

“Monday 26th. Some light rain at noon — rest of day fine. Embark at 5 am. Breakfast at 10 at the tail of the larger island. Proceed to the end of it. Find Indians with horses — hire 3. Ouvré returns to our breakfast place in search of a gun left there by mistake. Encamp at 3 o’clock to wait his return.

“27th. Fine weather. Two men who went with Ouvré return early this morning and inform us that he has gone in pursuit of an Indian who had watched our departure and made off with the gun. At 8 o’clock Messrs. McLoughlin, McLeod and Ermatinger take horses and arrive at Walla Walla [Fort Nez Percés] at 5pm. The boat starts at the same time — sail wind. Encamp above the Grand Rapid.” This was the Grand or Umatilla Rapids, a long and dangerous rapid that ran through a narrow canyon with perpendicular walls, eighteen miles below Fort Nez Percés and a few miles above the mouth of the Umatilla River.

“[March] 28th. The Boat arrives at Walla Walla by 11 o’clock am. Ouvré also arrives on foot having recovered the gun with the aid of Tomas Tuppuri’s (the Walla Walla chief) wife…”

From early years the fur traders traveled the Columbia River in boats rather than canoes. These boats were for the most part clinker-built bateaux with round bottoms and narrow beams, lighter in weight than the HBC’s York boats used on the other side of the Rocky Mountains. These boats afforded easier passage up the long and steep portages that existed along the Columbia River west of Fort Vancouver. These craft were both rowed and paddled, and their seams, which opened in the heat of the sun or the stress of the rapids, were pitched and gummed frequently to keep the boats afloat. The gum the men used was a mixture of sawpit resin and tallow and they melted the pitch into the seams of the boat by drawing a burning piece of firewood along each seam. To a stranger, it appeared as if the voyageurs were “burning their boats behind them.” [Source of quote: James Robert Anderson: Memoirs, p. 140. James was son of Alexander Caulfield Anderson].

Coming next, but not necessarily the next blogpost: YFE, Fort Nez Percés to Fort Colvile. Which journal shall I chose to publish, I wonder? This one is excerpts from Edward Ermatinger’s 1827 York Factory Express Journal, online at “Peel’s Prairie Provinces,” University of Alberta Libraries.

The next post in the series is here: https://nancymargueriteanderson.com/second-leg/

If you want to purchase the book, you can do so here: http://ronsdalepress.com/york-factory-express-the/

On Zoom: Yes, I am resisting, but recognizing that I will have a series of talks on Zoom, which those who are interested will have to register for as they come along. So spread the work among your historical friends, and we will see what happens.

The York Factory Express: Should you wish to order a signed book from me, get in touch through the contact sheet of this site. Thank you.