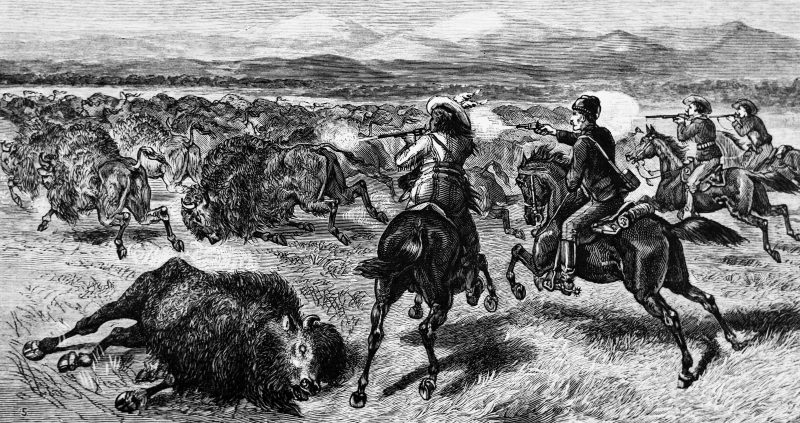 Finan McDonald was one of David Thompson’s men, but unlike most of his men he also worked for the Hudson’s Bay Company as a clerk at Spokane House, and later in the Snake parties. According to Bruce McIntyre Watson, the author of Lives Lived West of the Divide, Finan McDonald was known as “McDonald of the Buffalo” because in a buffalo hunt he once wrestled a large buffalo to its death. A large, bearded, redheaded Scotsman born in Aberdeenshire or Inverness ca. 1782, Finan McDonald was an employee of the North West Company and came west of the Rockies as early as 1807. He would have known and worked with my 3-times-great grandfather, David Thompson’s “Beaulieu.”

Finan McDonald never graduated to any position beyond clerking in the Hudson’s Bay Company. His day-to-day language was a mixture of Gaelic, English, French, and a half dozen Indian languages, and he never managed the intricacies of English grammar and spelling. Some of his letters and reports can still be found in the Hudson’s Bay Company Archives files, for example, this one, written from Spokane House, April 5th 1824. In fact, I could write an entire blogpost on interesting letters I have found in that archives, and perhaps, sometime, I will.

I am including only one paragraph of his letter in this post, but I think you will enjoy it.

I got safe home from the Snake Cuntre thank [God?] and when that Cuntre will se me againe the Beaver will have gould skin as to sa to keep freemen in order and to there duty I wood prefare to have Band of Indians to Command then Band of free men they thinks no man for an Advise nor will not lasin to that is told to them they naver thinks of there own Profit nor the Companey as long is they gate Buffaloe meat. They ar a troublesum set round Fort Spileing the natives Paying averey articils they Byes double the Price that we give the natives which spiles the Trade it is the thing that will not doe to keep the Free man round Post there is Plenty Beaver in the snake Cuntre and in the Fall of the year after they delivers up ther furs and takes there advance they Can easley return Back to the snake Cuntre before the snoe wood fall in the mountins, the snake Cuntre is not so far off as People expect it to be.

If you want to know more about Finan McDonald, the best source for information is likely an article written by J. A. Meyers, and published in the Washington Historical Quarterly, Vol. 13, No. 3 (July 1922) pp. 196-208 — and titled “Finan McDonald — Explorer, Fur Trader and Legislator.” But I am going to tell you a different story in this blogpost — a far less important story than those told in that article.

On getting out of the Wood, we arrived at a Marsh or Swamp of considerable extent covered with long grass & reeds, & having with difficulty passed through it, we came to a short point of Wood & then to the Boat Encampment at 10 p.m., terminating our Journey across the Rocky Mountain Portage. Here the water communication commences again, which is certainly an agreeable change in our Mode of traveling. We found Mr. [John Warren] Dease & Mr. Finan McDonald here; & a few returning Servants & families on their way across the Mountain, who were waiting our arrival so as to return with our Horses to the other Side of the Mountains.

So Finan McDonald went out in the Fall Express, riding one of the Jasper House horses up the steep Grand Cote to Athabasca Pass and the east side of the Rocky Mountains. He would have arrived at Jasper’s House sometime in late October, and then gone down the Athabasca River with the other people who were leaving the territory — all planning to spend their winter at Edmonton House. They would then join the outgoing York Factory Express when it arrived at Edmonton House in the spring of 1827. Because of Edward Ermatinger’s York Factory Express journals, we know that Finan McDonald did join the outgoing Express of 1827, when this story happened: See https://nancymargueriteanderson.com/seventh-leg/ The most interesting part of this story is that this does not appear to be the same occasion when Finan McDonald successfully wrestled with a Bison bull! This fight was definitely not successful for the man, at least, although it might have made the bull happy!

But this is not the Finan McDonald story I am going to tell in this post. Mine is a much smaller story, but it amused me to find how often it was mentioned in the journals that followed the 1826 York Factory Express journal. Apparently, as he came down the Athabasca River to Fort Assiniboine in November 1826, Finan McDonald cached a canoe somewhere along the river bank. The York Factory Express men tried in later years to find said canoe, but had some difficulty in recovering it. But they did in the end…

As a matter of fact, they found it almost immediately, according to this story. In 1827, Edward Ermatinger has this to say of Finan McDonald’s canoe:

Sunday, 6th [May 1827] At 10 o’clock come up with Mr. [George] McDougall and 4 men from New Caledonia who have been following the ice these 9 days past from Jasper’s House. Remain here 3 or 4 hours and proceed again 6 or 7 miles, the ice having given way so far. Mr. McDougall gets a bark canoe, left here by Mr. Finan McDonald last fall, repaired to take down in place of a skin one which. he brought from Jasper’s House.

And yet, in 1828, in Edward Ermatinger’s outgoing journal:

9th [May] Fine weather. Embark at half past 3 a.m. Remain 2 hours gumming a Boat which was left on the banks of the River 2 years ago and placed in it 3 men, one out of each canoe, to take it down to [Fort] Assiniboine.

So both a boat and a canoe were left on the banks of the Athabasca River in Fall 1826? Perhaps the boat is the skin boat that was left behind when the birchbark canoe was picked up in spring 1827? It can’t be, because this report says it was left on the river two years ago, not one.

Nevertheless, the story continues, as all Métis stories do. The men who worked along these rivers had long memories. However, George Traill Allan makes no mention of boat or canoe in 1831. In 1835 there was so much ice and snow along the river that James Douglas made no mention of either boat or canoe. Nor did George Traill Allan mention it in 1841 — but he wouldn’t. If it did not concern food and feasts or hunting, it did not interest him.

However, in 1847, as he was coming up the Athabasca River from Fort Assiniboine, on his journey home, Thomas Lowe has this to say:

Tuesday 5th [October 1847] Dull cloudy weather, and a little rain. Came the usual distance. In the forenoon passed the Cache that Mr. McDonald made three years ago.

This cannot be the same cache that Finan McDonald made in 1826, unless the date was changed in the story that Thomas Lowe heard. But the Cache is in the same place as Finan McDonald’s cache, or close to it. Which McDonald came into the territory in, say, 1844? None that I can see, either in or out. Still, no wonder I noticed all of those caches made by McDonald, whether Finan or not.

Wednesday 27th [September] Strong head wind all day, but very warm. The two men who started ahead yesterday broke their canoe and we embarked them again late in the afternoon. Encamped at Mr. McDonald’s Cache.

Thomas Charles did not mention this Cache in his outgoing journal, and his incoming journal did not get kept up after he left Edmonton House, so we have no information from him. Interesting, though, how McDonald’s Cache keeps showing up in the journals, and it is quite possible that it is still Finan McDonald’s Cache. The men who worked on these rivers remembered all the stories of the river, even if the stories got mixed up as they were passed down to them. That is part of the traditions of the fur trade and the Métis men who worked in it.

And if you turn that “three” into “thirty,” it works. These journals are very hard to read, especially as you can only look at the originals on microfilm!

Finan McDonald did make it home to Canada West (Ontario), likely with his Spokane wife and children. In 1828, he bought himself a farm at Charlottenburg, in Upper Canada, where he raised his family. He was at Williamston, Ontario, in 1835 and on January 4, 1838, he was commissioned captain in the First Regiment of the Glengarry Militia. Seven years later he was elected a member of the Provincial Parliament for Canada West [Ontario], 1843-1844. Some years later he became involved in litigation of his brother’s estate and went to jail, probably because of this litigation. He died in 1851, and you will find his gravesite in the St. Raphael Roman Catholic Cemetery in Charlottenburg, Ontario.

So not everyone who appears in these York Factory Express journals has a happy ending. In fact, from recent blogposts I would say that most did not. If you want to find out more about The York Factory Express stories, then you can order the book here: http://ronsdalepress.com/york-factory-express-the/ Alternately, speak to me and I can send you a signed copy! And thank you!

The York Factory Express: Should you wish to order a signed book from me, then get in touch with me through the contact sheet of this site. Thank you.