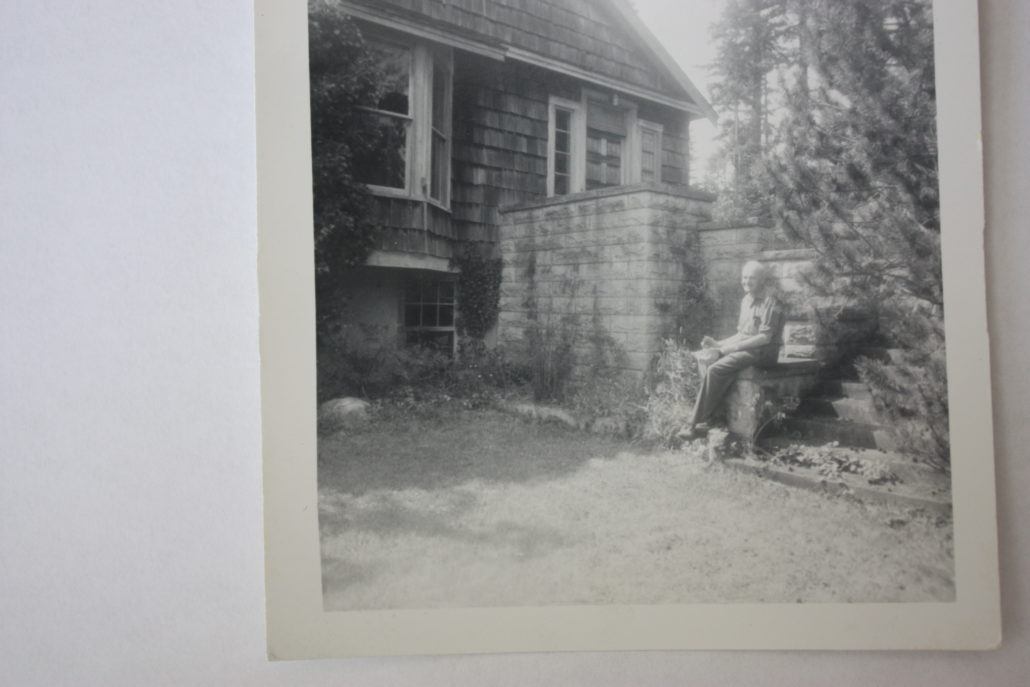 Elton Anderson is sitting on the front steps of the house that replaced his grandfather’s house in Saanich. A. C. Anderson’s house stood at the corner of Wain Road and West Saanich in the late 1800s.

This is my second post on Elton Alexander Anderson. If you missed my first post, you can find it here: https://nancymargueriteanderson.com/elton-alexander-anderson/

The first story brings my readers through the second world war, where Elton served in the RAF flying over Burma, in what is often called the Forgotten War. By the time Elton returned to Vancouver, my parents had purchased a farm on Cortes Island, in what is now called the Discovery Islands east of Campbell River. The owner of the farm had not sold the logging rights, and when Elton cruised the timber on the property he paid the old owners what he thought the timber was worth. When he later discovered that there was much more timber on the property than he had first thought, he wrote a cheque to the old owners and sent it off to them.

For the first few years, Elton and my father, who worked for him, logged with draught horses. Within a few years new logging equipment began to appear on the market, and Elton bought a Caterpillar D9. This piece of equipment enjoyed many adventures on the island and built some of the roads that connected the Cortes Island communities. (I wonder where it is now? I never thought to ask that question!)

Elton was what you called a “gyppo-logger” — he ran “a small scale logging operation that is independent from an established saw mill or lumber company.” From early days, he was a selective logger, protecting special places from damage and respecting the forest. He refused to log a beautiful strip of woods we called the Mossy Swamp, and it was not until he sold his business that this magical place was logged. On Elton’s tree farm — for tree farm it was — one could hardly tell that active logging was going on. The roads were muddy and slick, perhaps, but for the most part it was not until you got to the booming ground that you understood that logs were being removed from the forest around the farm.

My mother remembers Elton coming home from a hard day in the forest, gently holding a wild flower in his hand. Before he had even changed out of his clothes, he would sit down and look through his plant books, until he could identify the flower. He never knew the name of domestic flowers and called them all “galacticas,” but he quickly learned the names of all the wildflowers that grew on Cortes Island. Whether he thought of himself as Métis or not, I think that is an extremely Métis characteristic.

Elton spent his off-island days attending the Truck Loggers Convention, and the Vancouver Natural History camps. He took my family on many camping trips around British Columbia, and I later came to understand that we were exploring his grandfather’s trail around the HBC’s New Caledonia District. In one camping trip, Elton took us to Bella Coola, near which his grandfather, Alexander Caulfield Anderson, had been posted in 1834 [at Fort McLoughlin]. We ate lunch in a restaurant there, and though we were the only people in the place the proprietor came over to tell us we were sitting in the ‘Indian section.’ Elton was the grand-son of an HBC trader and his Métis wife and knew he carried Indian blood; he shrugged off the proprietor’s warning and we didn’t move.

My cousin, Doug, remembers Elton as a rough man who gruffly warned him to not find his way to the logging site because of the danger of falling trees. Doug, being a rebellious child, found this warning a challenge and turned up at the logging site only a few hours later. When Elton spotted him hiding in the trees, he took his nephew up on the Caterpillar and carried him around with him all day. Doug was not a child used to kindness, and remembers it to this day.

My mother and father sold the farm and left Cortes Island in 1963. Elton retired soon after and sold his company. He then began travelling extensively around the province, always carrying with him a copy of Lyon’s “Trees, Shrubs and Flowers of British Columbia,” and Peterson’s “Field Guide to Western Birds.” He owned a camper which he drove everywhere, calling it his “Tin Tent.” His journals detailed his passion to get off the main roads, and on one occasion he had a good laugh when the backroad he took circled a mountain and brought him back to where he had begun. His letters were written on paper left over from the Vancouver Natural History newsletters, and every inch of the page was jammed with typewritten words. Every letter had a carbon copy which he sent to someone else, and Elton expected his letters to be read and returned to him on his next visit — they contained much information that he left out of his journals.

I was delighted to find in one of his 1972 letters that he had visited Harley Hatfield (Coquihalla Brigade Trail explorer and writer) in the Okanagan. A few days later, Elton was exploring the backroads immediately north of Kamloops Lake — Criss Creek, Red Lake, Carabine Creek, and Copper Creek — where he had  been told the brigade trail between Kamloops and Fort Alexandria ran. He was right: that is where the brigade trail did run, but Elton could not locate any of the locals who could show him exactly where it was. It is clear from other papers that he left behind, and that I inherited, that he was researching his grandfather’s story in order to write his biography.

In the 1970s, Elton became involved with the British Columbia Nature Council, a small group that included some eight natural history societies. Elton fought to have the trees removed behind the Mica Dam prior to flooding. He worked for the removal of no-deposit/no-return bottles (you take your bottles back to the grocery and liquor stores because of him); and he led the fight that saved the Skagit Valley from flooding. Elton Lake, in the Skagit Valley, was named for him. Elton advised the then British Columbia Nature Council that, to be an effective force within the province, they had to work towards uniting all the natural history clubs in all parts of the province. Moreover, Elton said, they needed to have a newsletter that connected them all.  Elton took on the job of uniting the various natural history clubs under the umbrella of the Federation of B.C. Naturalists, and it was said that wherever Elton travelled, a new natural history club sprang up. Soon the Federation of B.C. Naturalists had 33 member clubs, and its growth was almost entirely due to Elton’s work, particularly his writing of the Federation’s newsletter.

In 1974, Elton won the Ted Barsby Trophy as B.C. Conservationist of the year. By that time he was already sick with the disease that killed him. He and his brother, Harry, and sister Peggy (my mother), visited [anonymous place] where he discovered a clump of extremely rare Phantom Lilies. To protect the location of this rare flower he kept the hiding place secret, and allowed his sister-in-law (Harry’s wife) to take credit for finding the flower. A day or two later he fell ill and went to the hospital. He died on July 9, 1975.

The Federation of B.C. Naturalists created the Elton Anderson Award and every year, gives it to a prominent conservationist. It’s a beautiful trophy, a carving of a wolverine, but at the time I spoke to them in 2009 or so, no one remembered who he was. At about the same time, my sister and I took a trip through the interior, and saw the damage that the pine beetle had done. We wondered what Elton would have done. Would he have jumped on the issue and fought for action as soon as the province lost control of the pine beetle? Could he have addressed this issue in its stages and prevented what happened? We don’t know and it’s unlikely he could have made that difference, but we know we would have tried.