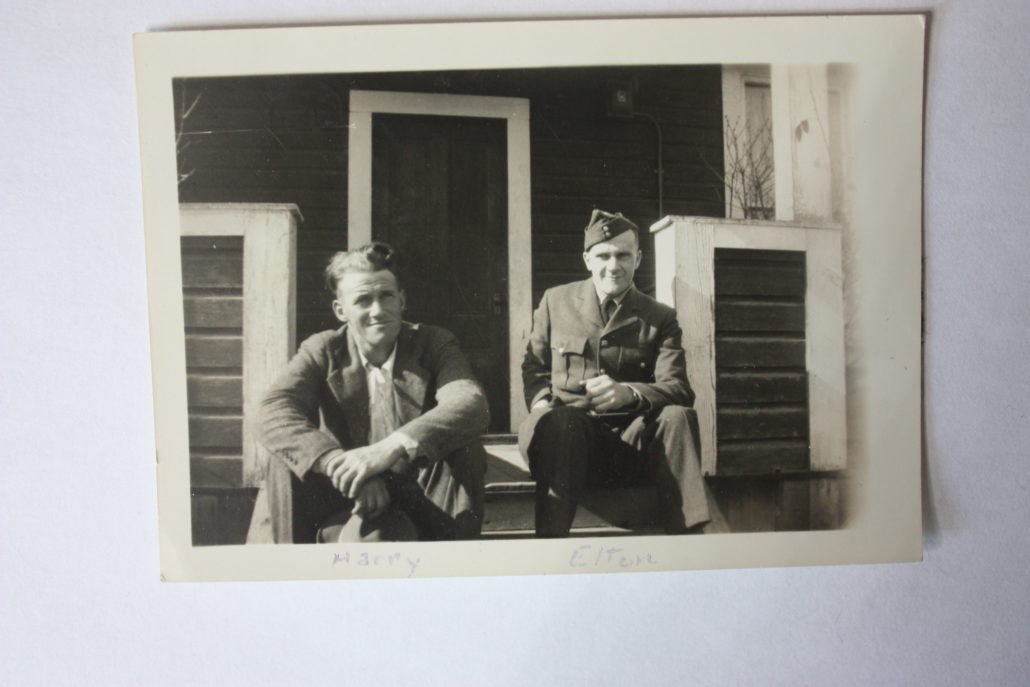 Elton Alexander Anderson, in his uniform, and his younger brother Harry Granville Anderson, at the beginning of the 2nd World War.

Elton Alexander Anderson, 1907-1975. Son of Arthur Beattie Anderson and Emily May Christmas. Grandson of Alexander Caulfield Anderson, of whom I have often spoken on this blog. Elton was my uncle. Like A.C. Anderson, Elton was an explorer, a naturalist, and a historian — had he lived long enough, he would have written his grandfather’s story.

Elton was born in Saanich on August 10, 1907, the second child and first boy of Arthur Beattie Anderson. Elton’s mother, Emily May (Emmy), was the daughter of Reverend Frederick Granville Christmas of Saanich and Duncan. She was also grand-daughter of Reverend Henry George Tierney Elton, youngest son of Reverend Sir Abraham Elton, 5th Baronet, Clevedon Court, Somerset. So if you are wondering why members of my Métis family sound so “English,” it is because of its close ties to some members of the Elton and Christmas families in Duncan (very much a more-English-than-the-English community). I did not realize that myself until I heard my mother speak on CBC in 2005, after she had written her book “Lurking Back,” and I thought “she sounds just like an English-woman!” And I later realized that so, too, do I. Like all Métis, we have ancestors from many different walks of life. But for us, who are descended from Arthur Beattie Anderson, this relationship is fairly uncomfortable — seventy years later it still remains so. I will, of course, talk a little about this discomfort when I talk about Arthur Anderson in a later post. It is, to me, part of the Métis experience. When the post is written, it will appear here: https://nancymargueriteanderson.com/arthur-beattie-anderson/

But a fair bit of Arthur’s history will appear in this post, because it is important to Elton’s story, and my mother’s story too, and that of all my aunts and uncles, who I knew well. Elton’s father, Arthur, had spent his youth logging and mining in the Kootenays, and was 41 years old by the time he returned to the coast to marry Emmy in 1905. He returned with enough money to buy a stretch of property just north of St. Stephens Church in Saanich, and those who live on Salmon Road live on what used to be his land. To earn money to support his growing family, he sold the property off in chunks, and worked on building the Malahat Highway, just across the inlet from his house.

About 1918 Arthur saw an opportunity for raising sheep on Valdez Island and bought 54 acres of land there. The two boys — Elton was in Grade 6 or 7 and Harry Granville Anderson, his brother, in Grade 5 — were pulled out of school to be their father’s logging crew on Valdez.

Logging was hard work and the boys had no heavy equipment to help them. Because of the high amount of pitch in the local trees, which made a cross-cut saw hard to handle, they had to cut the tree high up, and Arthur made a springboard from old lumber he found on the beach. Arthur was intelligent and inventive: he also made a little cart on which to put the logs to roll them down the steep slope to the water, he made brakes for the cart out of pieces of old cross-cut saws and wire, and to prevent the cart-wheels from jumping the track in its rush down the bank, he cut grooves in the tires. The two teenage boys handled the big job of falling the wind-hardened trees and booming them up in the bay on the fringe of Porlier Pass.

When the boys did not make enough money logging, they rowed across the tidal nightmare that was Porlier Pass to the Japanese fishery on Galiano Island, where the herring-fishermen threw the boys the useless dogfish they had caught. Dogfish oil was worth forty cents a gallon in the local sawmills, but it took a lot of livers to make a gallon, Harry said, and it was a wet, cold, and smelly job. The boys sold the dogfish carcasses at Nanaimo for fertilizer, but of course to make the sale they had to row the carcasses all the way to Nanaimo. One day they earned $2.00, and that was a red-letter day for the boys!

I was asked if the family trapped for furs in Saanich and on Valdez Island, and I do not believe they did. Firstly, where would they sell the furs? I suppose the HBC store in Victoria, and possibly Nanaimo, would be the obvious answer, but I don’t know whether or not it was anything more than a department store in those days. Secondly, one must remember that this was the Gulf Islands, on the mild west coast of North America. Furs trapped here (if they were trapped at all) would not have experienced the cold weather that created the thick coats that the fur companies paid for. Even in its fur trade heyday, Fort Victoria was not much of a fur trade post. (Fort Rupert, however, did trade for furs from First Nations people: or at least they did in 1876-1881. The Indian trade book for that northern Vancouver Island post can be found in B.C Archives, A/C.20/R2.3).

To continue Elton’s story: When the logging and farming failed to support the family and the taxman took the property, Arthur abandoned Valdez and took his family to Duncan, where his father-in-law lived. Elton and Harry logged in the Duncan and Cowichan area for almost eighteen years, and any money the boys earned was supposed to go to support the family, especially as in later years Arthur was too sick to work. Elton was the responsible older boy who handed all his money to his mother, but the rebellious Harry refused to give up everything and enjoyed a little time in the local beer parlour.

When World War II came, Elton tried to sign up with the Air Force, but the recruiter told him he needed to prove he had a high-school education. Elton had attended school in Saanich, and so he wrote to the principal of that school and explained his predicament to him. The principal, who had not known Elton, based his response on the intelligence of the letter. He told the recruiting officers that the school records had been destroyed by fire, but that he remembered Elton, and that Elton had graduated with honours from his school.

Elton was more than 30 years old when he joined the Air Force. I don’t now remember where he trained, but it seems to me it was Christmas Island. Elton was called Andy Anderson by his all-Canadian crew members, who also called him ‘Pop’ because he was so much older than them. They flew an American bomber called a Liberator, and Elton trained as a waist gunner. But when his training was finished, Elton was seconded by the RAF and spent most of the war flying over Burma as a tail-gunner in an all-British crew — probably flying in a Lancaster. He flew out of Cocos Island, an Indian Ocean Island that belonged to Australia. Tail-gunners were a very important part of the crew; they are the men who shoot down the enemy planes attempting to sneak up from the rear of the bomber where no other crew-members had a good view. Air Force veterans tell me that tail-gunners have a very good chance of not surviving their flights — a 50% chance of not returning home on every flight.

But Elton survived. On his return to Canada, he told his sister, Peggy, a few war stories. On one occasion one of the men in the barracks fell ill, but the Royal Air Force had no patience for wimps and marched him until he died. It disgusted Elton that the RAF had not taken the time to discover whether the man was actually sick or not. He also told Peggy of another occasion over the Indian Ocean, when one of the planes in their convoy was shelled The plane went down, but the members of the crew had ditched and were alive in the water. The plane he was flying in was low on fuel and could not pick them up, but when they refuelled and returned they could not find the men. That failure haunted Elton, and he would never talk about his wartime experiences.

The fact that I know all this about a man who died in 1975 indicates, clearly, that I sat down his sisters and brothers and asked them their stories. The lesson here is, if you don’t collect the stories, you lose them. My next story about Elton will begin with the years after the war, when he logged on Cortes Island. When I write that section of his biography, it will appear here: https://nancymargueriteanderson.com/elton-alexander-anderson-2/