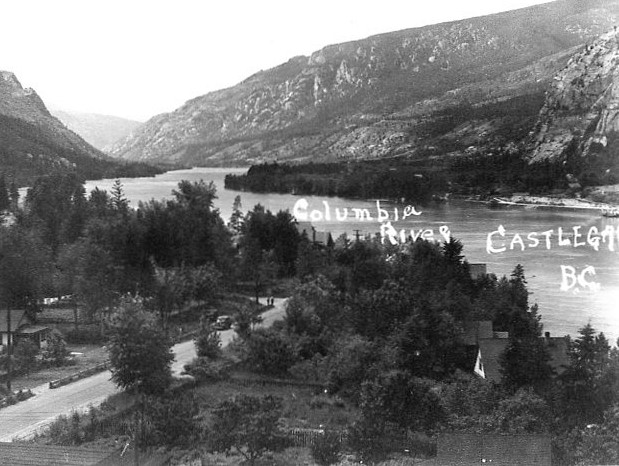 This is the Columbia River near Castlegar, close to the mouth of the Kootenay River, looking toward the Arrow Lakes. This image is from the Columbia Basin of Regional History, the Valemount Historical Society & Kootenay Gallery of Art, History & Science, image number 0131.0349.

The botanist named David Douglas journeyed out of the Columbia District in Edward Ermatinger’s 1827 outgoing York Factory Express. He left behind him an interesting journal. Here goes:

On the 20th of March, 1827, by the annual express, and in company with Dr. McLoughlin, I started for England from Fort Vancouver, a place where, if I had spent not many comfortable days, yet some such happy ones, that though I halted the prospect of returning to my native land, I confess that I could not quit such an interesting country without much regret. I walked the whole distance to Fort Colvile, on the Kettle Falls, which occupied twenty-five days, not one of which passed without presenting to my notice something of interest, either in Botany or Zoology. The beautiful Erythronium grandiflorum [yellow avalanche lily] and Claytonia lanceolata [western spring beauty] were in full bloom among the snow.

According to Edward Ermatinger’s Express journal for 1827, the Express Boats left Fort Vancouver just before 6 pm, with passengers Chief Factor John McLoughlin, Chief Trader Alexander Roderick McLeod, David Douglas, and Francis Annance. Pierre Chrysologue Pambrun was also here. He was not yet in charge of Fort Walla Walla in 1827, but had come down to Fort Vancouver from Fort St. James in 1826 and so was probably still at Fort Vancouver. I peeked ahead to see where he got off but couldn’t tell, so both he and Francis Annance may have returned to Fort Vancouver with the second boat once Ermatinger’s boat was safely above The Dalles.

So David Douglas got to Fort Colvile, and “On the 18th of April, Mr. Ermatinger with seven men and myself, took our departure from the Kettle Falls to the Rocky Mountains early in the morning. Nothing of importance occurred; we entered the Lower [Arrow] Lake on Friday the 20th…”

Fortunately, Edward Ermatinger gives us many more details of this journey to the Lower Arrow Lake:

Tuesday 17th. The accounts being completed for York as far as circumstances permit Express Boat manned by 7 men under charge of Mr. E. Ermatinger leaves Fort Colvile in the Evening. D. Douglas Esq., Passenger. Encamp a mile from the Fort. Perrault found himself too unwell to go out as intended…

Douglas said he left Fort Colvile on April 18. It might be that Douglas joined the party on the morning of that day, spending the night at the far more comfortable fort. Edward Ermatinger’s journal continues:

Wednesday 18th. Light snow this morning — fine weather afterwards. Proceed on our journey at half past 5 am. Reached the head of the [Little] Dalles by 3 pm. Experienced very little difficulty in ascending them… Encamp at half past 6, 8 miles above the Dalles.

These Little Dalles were the second set of rapids called the Little Dalles on the Columbia River. The first was in Nespelem Canyon north of Fort Okanogan; the second was here, slightly north of Fort Colvile; and the third further north again, where Revelstoke is today. As you know from reading my book, this second Little Dalles had a jutting reef at its upriver end that divided the river into two powerful currents that flowed through a narrow rock-walled canyon, filling the entire river in whirlpools. In about 1858 or so, the Americans will establish a customs house here, which caused some trouble for the HBC men at Fort Shepherd, according to Jason Allard — see: https://nancymargueriteanderson.com/fort-shepherd-stories/

David Douglas will have a good description of the northernmost Little Dalles, but we have to wait for it. Ermatinger’s journal continues, filling the gaps that David Douglas made no mention of:

There were a whole batch of little rapids around modern-day Trail and Castlegar, which people today do not remember ever existed, but which are mentioned in the York Factory Express journals. From south to north, these are: China Rapids; Waterloo Eddy, at the mouth of Cai Creek, Castlegar; Kootenay Rapids (sometimes Tincup Rapids) just below the mouth of the Kootenay River; then the Upper Kootenay Rapids (or Upper Tin Cup), just above the mouth of the Kootenay River at Castlegar, where the river narrowed. (Sometime over the years the names of the Tin Cup Rapids and the Kootenay Rapids were reversed, so the “Upper” and “Lower” works quite well in this blogpost). When steamships ran up and down the river these rapids and rocks were considered a hazard, and they were blasted to widen the channel. But when David Thompson travelled this section of the river in 1811, he noted that they were fairly strong rapids.  And so the York Factory Express men would also have noticed these rapids.

And here is David Douglas’s description of the Arrow Lakes and of the Little Dalles near Revelstoke, B.C.:

Nothing of importance occurred; we entered the Lower [Arrow] Lake on Friday the 20th and used our sail, the wind being so favourable that we reached the termination of the Upper [Arrow] Lake on Sunday the 22nd. Twenty-eight miles above this place, where the river takes a sudden bend, and to all appearances is lost in the mountains, a scene of the most terrific grandeur presents itself; the whole torrent is confined to a breadth of thirty-five yards, and tossed in rapids, whirlpools, and eddies; on both sides are mountains towering to the height of six or eight thousand feet from their base, rising with rugged perpendicular precipices from the very bed of the river, covered with dead timber of enormous growth, the roots of which, laid bare by the torrents, and now hurled by the violence of the wind from their original high places, come hurrying down the stream, bringing enormous fragments of earth attached to their roots, and spreading devastation all before them. The sun feebly tipped the mountain-tops as we passed this place, and, seen through the shadowy pines, imparted a melancholy air to the whole gloomy scene.

This was the Little Dalles Canyon with its four sets of rapids, the northernmost or top rapid being what we called Steamboat Rapid. All of these rapids are now drowned by the rising of the Columbia River behind dams, but they must certainly have been an exciting sight to see!

Edward Ermatinger was much calmer than David Douglas about the passage through these Narrows. In his journal, he wrote: “We then enter a narrow banked on each side by rugged rocks and ascend a succession of strong rapids, at the head of one of which we encamp, having before us a short piece of smooth current, 7 pm. The banks of the river nearly the whole way we came today are still covered with deep snow as well as the woods.” David Douglas’s journal continues:

On the 25th we passed the “Narrows of Death,” a terrific place in the river, which takes its name from a tragical circumstance which I have not here room to relate, when ten individuals endured almost unparalleled sufferings, and were finally all released by death, with the exception of one.

There were a couple of accidents and drownings in this section of the Columbia River, but Douglas is referring to the time when some Nor’westers coming downriver lost their canoe and supplies in Les Dalles des Morts, or Douglas’s “Narrows of Death.” I’ve written about this accident, here: https://nancymargueriteanderson.com/cannibalism/

Edward Ermatinger describes this section of the river in his journal:

Tuesday, 24th. Towards evening commences raining and continues all night. Proceed at 5 a.m. The part of the river we have this day passed is full of Rapids and strong current with occasional pieces of smooth current — in mounting the Rapids we sometimes used the Line but more frequently the poles…

Wednesday, 25th. Thick fog in the morning — fine day. Start at 1/4 past 5 a.m. Course of the river very rapid. Take breakfast at the foot of the Rapid below the Dalles des Morts..

This is Priests Rapids, and the name comes from the drowning of two Canadien priests at this place — this is a story I don’t think I know, so if you do, let me know please. (Not the two botanists, Wallace and Banks, who also drowned here — But the two priests).

Carry all our baggage at the lower brink of the Dalles — haul up our boat safe, tho’ it is rather a dangerous place — clear the Dalles [Dalles des Morts] about noon… River becomes more rapidous [sic] as we ascend. Encamp about 7 or 8 miles above Dalles des Morts at half past 7 p.m.

Rapids Croches had various names over the years and in the various journals: for example, Crooked Rapids, and St. Martin’s Rapid. The rapids were at the outlet of Gold River; today the Goldstream River. Was this where the later Big Bend gold-rush happened? Perhaps so.

Pass several pieces of smooth current. Country very mountainous — snow deep. Encamp at the head of a small rapid at half past 7 p.m.

This is the first time I have noticed that Edward Ermatinger’s journal, and David Douglas’s, contain different dates. So Douglas did leave Fort Colvile with the Express and did not spend an extra comfortable night in the fort. That clarifies that. But as we continue with Douglas’s journal on our way to Jasper’s House, we must remember his dates are one day out from Edward Ermatinger’s dates.

So, this is what David Douglas has to say of his arrival at Boat Encampment:

At noon on the 27th of April, we had the satisfaction of landing at the Boat Encampment at the base of the Rocky Mountains. How familiar soever[sic] these snowy mountains have been to us so that we might be expected to lose an adequate idea of their immense altitude, yet on beholding the grand “Dividing Ridge” of this mighty continent, all that we have seen before seems to face from the mind, and to be forgotten in the contemplation of their height and indescribably rugged and sharp peaks, with the darkness of the rocks, their glaciers, and eternal snows.

And Edward Ermatinger finishes this post with an interesting statement:

Owing to the liberality of the gentlemen by whose posts we passed along the communication we were enabled nearly every night since we left Fort Vancouver to treat ourselves with potatoes at supper, and finished the remains of our stock from Fort Colvile today, probably the first ever eaten at this place. Fruits of attention to gardening.

When David Douglas crosses the mountains by Athabasca Pass, his story will appear here: https://nancymargueriteanderson.com/david-douglas-rockies/

4 thoughts on “David Douglas and his YFE journey”