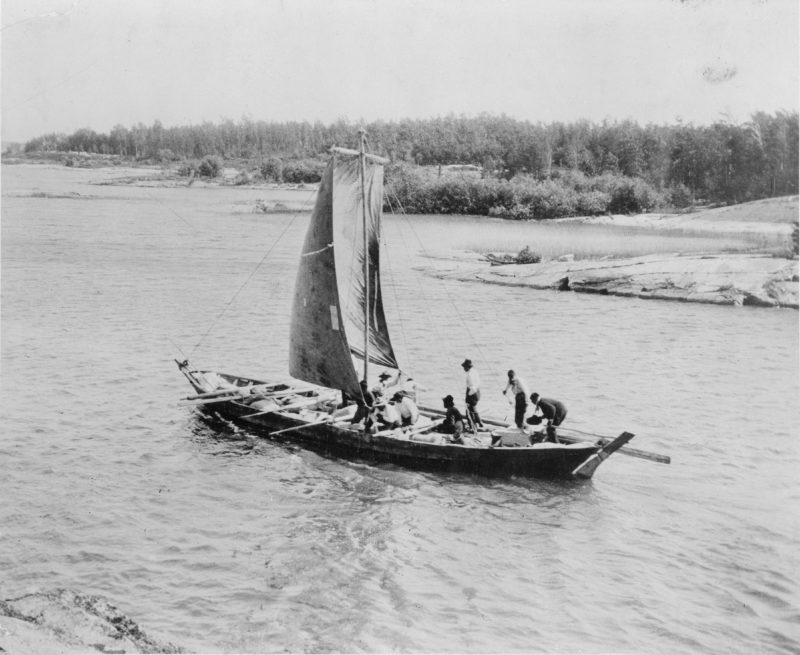 In this post, botanist David Douglas heads for home in England, after his journey down the Athabasca River with the outgoing York Factory Express. Edward Ermatinger was the leader of this particular Express, and the year is 1827. As we can see from the last post, David Douglas safely reached Jasper’s House on May 3, 1827.  Ermatinger’s outgoing Express left Jasper’s House on Saturday May 5, and David Douglas travelled downriver with his party. Three days later, Douglas’s journal reads:

Saturday the 8th [May]. this day presented scarcely any variety. The river is one hundred to one hundred and forty yards wide, shallow and rapid, with low gravelly banks, wooded with poplars and Pines. Its vicinity abounds with wild fowl, and the Northern Diver charmed us with his deep mellow melancholy voice in the evenings.

The Northern Diver is the loon, of course. But what a nice picture David Douglas drew with his words. His journal continues:

Our progress was ninety-three miles. The following morning we had gained but three miles, when we were detained by the ice, and here we found Mr. George McDougall.

As you can see from this blogpost, Edward Ermatinger’s Express ran into George McDougall, who had crossed the Rocky Mountains via Fraser River and Tete Jaune Cache. He had been sent by his brother, James McDougall, on a journey to Carlton House so that he could pick up James’s wife and bring her to her new home in New Caledonia. Here is that interesting story: https://nancymargueriteanderson.com/george-mcdougall/

We got on slowly, owing to a portage where the canoes had to be carried a considerable distance to a place where the main channel was clear, after which we proceeded rapidly, and arrived at Assinaboyne [Fort Assiniboine], one hundred and eighty-four miles from Jasper House, the next day. But as this place afforded us but little food, we pushed on without delay for Lesser Slave Lake, where we hoped to meet Mr. John Stewart [Stuart], who received us there with the utmost kindness, and showed me in particular so much attention that I travelled partly with the Brigade, and latterly alone with a single guide on foot to Fort Edmonton, on the Saskatchewan River, which I reached on Monday the 21st.

So, Edward Ermatinger sent some men (including David Douglas) down the Athabasca River to Lesser Slave Lake, to assist John Stuart’s brigades in bringing their furs to Edmonton House. In 1827 Stuart and his men brought their packs of furs not by the Athabasca River, but up the Pembina, where they would meet Ermatinger’s Express as it crossed the Athabasca Portage to Edmonton House. In 1827, when Edward Ermatinger crossed the Pembina River, he might have found John Stuart and David Douglas already there. It is clear that Douglas and Stuart came ahead of the Lesser Slave Lake party: in the next day’s journal entry, “Mr. Stuart remains at Pembina with the rest of the horses to wait his people.”  We know that David Douglas was also already there, because on Monday May 21, Ermatinger noted that “Mr. Douglas with one man goes ahead to reach the Fort today…”

So all these stories agree. At and beyond Edmonton House, David Douglas continued his journal entries:

From May 21st to the 31st, I spent my time in exploring the country round Edmonton House, which is woody and interesting; after which I embarked in Mr. Stuart’s boat for Carlton House. This mode of travelling gave me little time to botanize; I could only do so during the breakfast hour in the morning, and just before encamping in the dusk of evening, except when a halt was made for the purpose of hunting Buffalo and Red Deer. In some parts the scenery around the river is very varied and picturesque, especially near the Red Deer and Eagle Hills. The soil is dry and light, but not unfertile, with a rich herbage, belts and clumps of wood interspersed, which gives it a most romantic appearance. Near this place many Buffalo were killed, with a few Red Deer and Antelopes of the Plains…

The “Antelopes of the Plains” were, of course, Pronghorns.

This latter animal has so much curiosity, that he will approach within a hundred yards of the hunter, particularly if the latter wears anything red, a colour which is sure to attract him. The Buffalo is easily killed by a skillful person… On one of these hunting excursions, Mr. F[inan] McDonald was dreadfully injured by a wounded Buffalo Bull, which shockingly lacerated his left thigh, broke his ribs, dislocated his left wrist, and otherwise severely bruised him.

Here is that story! https://nancymargueriteanderson.com/seventh-leg/

David Douglas’s journal continues with his absolutely and laughably incorrect notion of how an injured Bison bull thinks, feels, and acts:

These animals have a propensity not to destroy life at once, but to delight in torturing their victim. On first striking the object of their vengeance, if he be stunned, or feign death, there is a chance of escape, the creature meantime lying down beside him, and watching with a steadfast eye for the slightest motion, in which case he instantly rises and gives another blow. Poor McDonald was thus situated for two hours and a half, bleeding and at the point of death, and that, too, under cloud of night, which afforded us scarcely any opportunity of rescuing him, for the animal lay watching within a few yards, and we were afraid to fire, lest a shot should strike our friend. By the activity of Mr. [John Edward] Harriott, and my assistance, he was, however, saved. I bound up his wounds and gave him all the aid that a small medicine chest, and my slender knowledge of surgery would suggest. Hence we passed hastily onwards in hope of meeting Dr. Richardson, but on our arrival found that he had gone to Cumberland House.

At Carlton House I had the pleasure of meeting with Mr. [Thomas] Drummond, of Capt. Franklin’s party, who had spent the greater part of his time in exploring the Rocky Mountains contiguous to the sources of the Rivers Athabasca and Columbia, where he had made a princely collection.

In fact Dr. Thomas Drummond appears in Aemilius Simpson’s incoming journals of 1826, when he joined the Columbia Express and followed it to the base of the mountains at Boat Encampment, before returning to Edmonton House with the men who brought the horses down the west side of the Rockies. To continue with David Douglas’s journal:

I had intended to cross the plains from this place to Swan and Red Rivers, but the hostile disposition of the Stone Indians rendered it unsafe. I therefore descended to Cumberland House, where I found Dr. Richardson, who kindly showed me portions of the noble collections in Natural History made during the expedition. This part of the country has been so well described in the former narrative of Capt. (now Sir John) Franklin, that little is left for me to say respecting it, and I shall merely notice my stages.

After leaving Cumberland House, two days took us to the Grand Rapid, the entrance of Lake Winnipeg, where we were detained by the ice. A few hours after it became rotten, sank and disappeared, leaving an open sheet of water through which we sailed to Norway House… On the 16th we arrived at Norway House, where I found letters from England. The following day Mr. [George] Simpson, the Resident Governor of the Hudson’s Bay Company, came, and I received great kindness from him; and after I had spent several days at Norway House, Capt. Sir John Franklin made his appearance, and most politely offered me a passage in his canoe through the lake as far as the mouth of Winnipeg River, on my way to Red River, which I gladly accepted.

From Jack Nisbet’s book, The Collector David Douglas and the Natural History of the Northwest [Seattle: Sasquatch Books, 2009], I learn that David Douglas stayed in the vicinity of Red River, and then asked to be sent on to Norway House where he would catch a ride (likely with the returning Portage la Loche Brigades) down to York Factory in time to catch the London ship. Captain George Back, Lieutenant E. N. Kendall, and Thomas Drummond (all members of John Franklin’s Expedition that year) also sailed out on the Prince of Wales for England.  They reached Portsmouth in early October and Douglas made his way to London. He is now home, and this is the end of this York Factory Express thread.

The first post of this thread is to be found here, if you want to read the entire journal: https://nancymargueriteanderson.com/david-douglas/

If you want to order the book, you can do so through my publisher, here: http://ronsdalepress.com/york-factory-express-the/ Thank you! David Douglas’s story is only one of many stories in this book.