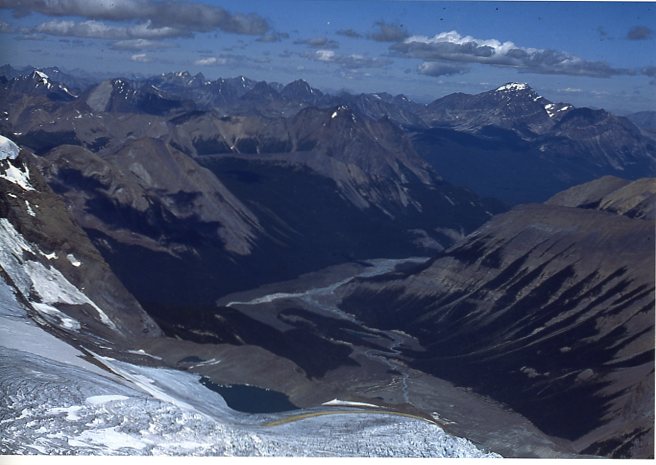 In 1827, botanist David Douglas travelled with the outgoing York Factory Express down the Athabasca River to Jasper’s House. From the height of the Rocky Mountains, as shown above, the outgoing Express will descend the steep hill into the Whirlpool River valley, and follow both the Whirlpool, and the Athabasca, north to Jasper’s House and the navigable part of Athabasca River.

So let’s begin with David Douglas’s Athabasca River: Firstly, this image is taken from the top of one of the nearly mountains — Mount Hooker, on the south-east side of Athabasca Pass — although it feels like the trail they are following should run west to east, it is actually running from the south-west to the north-east! The Express men will start their journey to Jasper’s House from the lake that you see in this picture, and the pass itself is hidden away behind the shoulder of Mount Hooker. The floor of Athabasca Pass is actually quite level: there is no climbing over a ridge of mountains as you travel through the pass. You literally just walk past the lakes and then down the other side of the mountains. The climb up to the pass from Pacific Creek is steep, however, and so is the hill downward on the other side to the Whirlpool River — that is what these Express men call the “ridge”!

At three o’clock I felt the cold so much, and the thermometer only stood at 2 degrees below Zero, that I was obliged to rise and enliven the fire to get myself comfortably warmed before starting. Through three hundred yards of gradually rising open low Pine-woods we passed, and about the same distance of open ground took us to the basin of the mighty river — a small circular lake, twenty yards in diameter, in the centre of the valley, with a small outlet on the West end, namely the Columbia, and another at the East end, namely one of the branches of the Athabasca, which must itself be considered one o the tributaries of the Mackenzie River…

Now it appears that the expressmen camped in the valley of Pacific Creek, and not in the pass itself (as I said in the last post in this series — and Edward Ermatinger’s journal is no help at all here.) But David Douglas is describing the climb up to the pass, through the grove of pine trees to the lakes in the middle of the pass — the Committee’s Punch Bowl. It is true that these lakes are the headwaters of the Mackenzie River, which flows all the way north to the Arctic Ocean! Nevertheless, in spite of what he says, David Douglas is not yet on the Athabasca River, but the Whirlpool, and the story of David Douglas’s Athabasca River continues below:

This is not the only fact of two opposing streams flowing from the same lake. This, “the Committee’s Punch Bowl,” is considered as being halfway [to Edmonton House, I presume], and we were quite glad to know that the more laborious and arduous part of our journey was accomplished. The little stream, the Athabasca [the Whirlpool, actually], over which we had stepped so conveniently, presently assumed a considerable size and was dashed over cascades, and formed cauldrons of lime-stone and basalt. Seven miles below the pass, as do the tributaries of the Columbia on the western side, so the Athabasca [Whirlpool] widens into a narrow lake, and has a much greater distance than the Columbia. At his point, the snow had nearly disappeared and the temperature was greatly increased. Many of the mountains on the right hand are at all seasons tipped with glaciers.

They are at the Grande Batture, now Scott Gravel Flats, where the mountains loom on every side. Edward Ermatinger writes that they rested “two thirds of the distance across the Grande Batture. Hang up our snow shoes on a tree, there appearing no need of them further. Since passing the height of land the snow has very rapidly diminished. At our last encampment [in the Pacific Creek valley] it was 5 feet deep and here there is only a little remaining on the ice on the banks of the River. What is left still smoothens our road which passes often over rough rocks.” David Douglas’s story of his journey down the Whirlpool and Athabasca Rivers continues below:

At ten we stopped to breakfast, fifteen miles from the ridge, where we remained for four hours. The thermometer stood at 2 degrees below Zero this morning and had risen to 57 degrees at 2 pm, a heat which we found dreadfully oppressive. This afternoon, having set off a little before the party, I missed my way and wandered from the path. As the sun was edging on the mountains, I descried about a mile off to the East, behind a low knoll, a curling blue smoke rising from above the trees, a sign which gave me infinite pleasure. I quickened my steps and soon came up to it when I found Jacques Cardinal, who had come to the Moose Encampment, and brought with him eight horses to help us on our way. He treated me with an excellent supper of mutton, the flesh of Ovis Montana (Geoff.), and regretted he had no spirits to offer me. Pointing to the stream, he jocularly said, “there’s my barrel, and it is always running.” The kind fellow also afforded me a part of his hut.

Edward Ermatinger had sent a man ahead to find Cardinal and the horses, and on the 3rd met “Jacquan [Jacques Cardinal] with 3 more horses. Arrive at Campment d’Orignal [Moose Encampment, where David Douglas was] at 7 o’clock, having travelled 5 miles thro’ very bad woods. Breakfast.” He makes no mention of any uneasiness because of Douglas’s disappearance (see below), and in fact he probably knew from one of his men, who had visited Cardinal’s camp that night, that Douglas was safe at Moose Encampment. Douglas’s journal continues below:

On the next morning, Thursday the 3rd, the whole party were brought up by Cardinal; they had been very uneasy at my non-appearance the preceding night. We breakfasted and proceeded by the banks of the stream. I preferred walking, though the ground was still soft from the recently melted snow and strewed with timber of small size. The difference of climate and soil, with the amazing disparity in the variety and stature of the vegetation, is truly astonishing. One would suppose it was another hemisphere, the change is so sudden and so great. We crossed the principal branch of the Athabasca [at the Grand Traverse], which becomes a river seventy yards broad when joined by the stream on the banks of which we had descended [Whirlpool].

At last, at the Grand Traverse, David Douglas is on the Athabasca River itself, and has left the Whirlpool River behind him. Edward Ermatinger writes that they “Continue our journey at 8 am. Ford the Grand traverse about noon. Proceed to Campement des Vaches [Buffalo Prairie] where we arrive about 3 pm. The greatest part of the road hither lies thro’ thick woods much encumbered with fallen wood. Ice and snow thick on the banks of the River. Terminate our journey across the mountains at 6 pm,” likely at Henry’s House where they camped, according to David Douglas, below:

“Here it was our intention to camp for the night,” he says of his arrival at Buffalo Prairie, “but Cardinal found his horses so unexpectedly strong, that the route was continued to the Rocky Mountains’ House where we were to find canoes, and which we gained soon after six pm.” This “Rocky Mountains’ House” was likely the remnants of either Larocque’s House, on Larocque’s Prairie, or Henry’s House: these two old posts were more or less across the Athabasca River from each other. (Henry’s House was the more likely campsite on this occasion).

“The scenery here is very fine,” Douglas wrote, “with a small lake and open valley commanding a sublime prospect of the mountains. Our distance today was thirty-four miles. On the following day (Friday) we embarked at daylight in two fine light birch canoes and went rapidly before the stream, the banks of which are low and woody, in some places narrow, in others widening into narrow lakes full of sand shoals.” Their destination was the first fort on Brule Lake, well to the east of modern-day Jasper, where the new Jasper’s House was built three years later.

We stayed to breakfast on a small low island in the Upper Lake [likely Jasper Lake], where we had some mountain-sheep’s flesh given us by Cardinal’s hunter. Continuing our route, we passed a ridge of steep mountains on the right [Miette Mountain] and five miles lower down a similar range to the left, which are the termination of the dividing mountains on the East side, and arrived at Jasper House at two pm.

So, this is the story of David Douglas’s Athbasca River, as promised. The first post in this short thread is here: https://nancymargueriteanderson.com/david-douglas/and the series will not end with this post as I expected. One more post will follow, which will be found here when published: https://nancymargueriteanderson.com/david-douglas-home/ — after which we will tell Paul Kane’s story of his outgoing journey over the mountains!

As you know you can purchase The York Factory Express here: http://ronsdalepress.com/york-factory-express-the/ It has always been available on Canada’s Amazon: unfortunately my link in the website does not lead to Amazon.ca. But it is now being delivered to Amazon.com, and also to the publisher’s American distributors, so it should be findable on American bookstore shelves in short order. The other piece of news I have, is that the e-book version will soon be available, if you have been waiting for that!