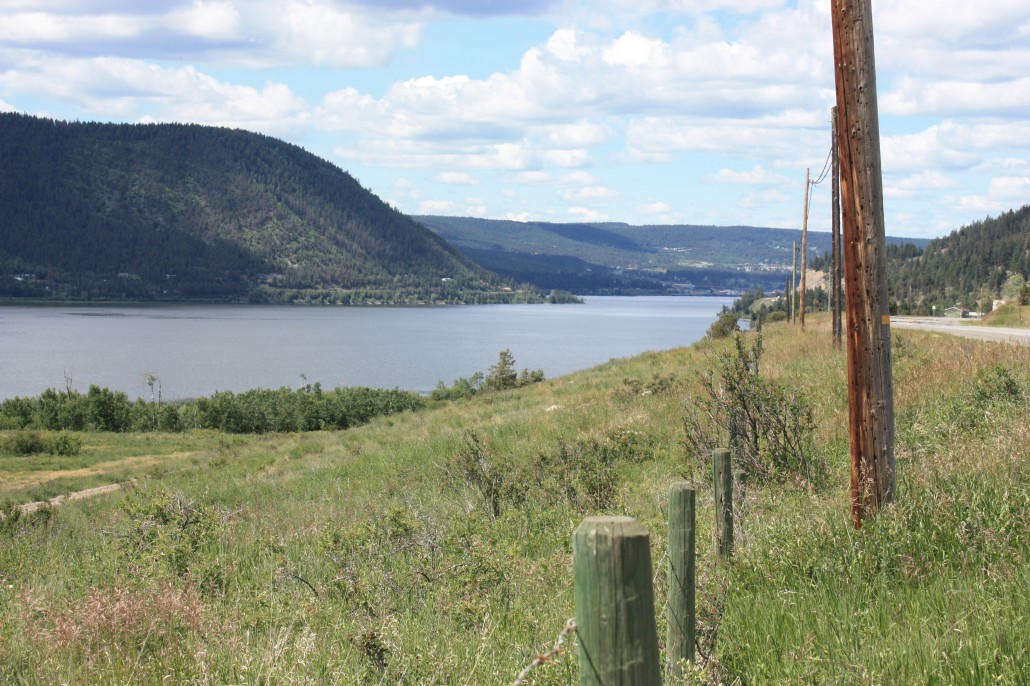 In 1879, Chief William, of the ‘Williams Lake Indians,’ wrote a letter to the editor of the British Daily Colonist newspaper in Victoria, B.C., urging readers to “settle the land question for Indians and to give them a small portion of their own vast domain on which they may live in peace.” This letter was used by a federal court judge, along with other historical documents, as evidence that the Colony of British Columbia did not meet its obligations to that particular Indian band. Interestingly, Alexander Caulfield Anderson knew this Native well from his years at Fort Alexandria, or, at least, a Native named William appears in his Fort Alexandria journals. However, whether or not I can tie this William to Williams Lake, I do not yet know. We will find out together.

Moreover, I can only presume that this “William,” who appears so often in the Fort Alexandria journals and who works for the fur traders at times, is the man who later became Chief William. But he appears to be an important Native man, and in later journals is one of the Secwepemc chiefs who received the annual gift from Alexander Caulfield Anderson.

And so, let me tell you what I know of William, as he appears in the Fort Alexandria journals, up to spring 1848. Anderson arrived at this post in late November, 1842:

[1842, December] Friday 25th: “Sent 3 ft Tobacco by Jack Muriscotte (who came for his rations) to Columetra, with a message to encourage the Indians to trap small furs.” The Fort Alexandria horse-guard was at Williams Lake, and I have included this because William often appeared with Columetra, who was possibly William’s father, and an old man by this time.

[1843, January] Saturday 17th: “As usual the men stopped labour at 1 pm & swept the fort & cut dry wood for themselves. Columetra & William with some followers arrived.” Monday 19th. “Made Columetra his annual present, as per Blotter.” [February] “Tuesday 7th. William & some of the Atnahs arrived in the evening of yesterday.” The Dakelh people lived around Fort Alexandria; the Atnahs were Secwepemc from the south. Their northernmost boundary was close to modern-day Soda Creek, a little north of Williams Lake. On the 8th, “William handed in some beaver, a wolf & a lynx; and put 6 Beavers in store, not yet traded.”

[1844, April] “Saturday 6th. Last night William arrived from below, bringing intelligence of the horses stolen from the guard, as noted in 26th ulto. It appears that Gagnon and other Indians who are remaining at a lake beyond the Barge are the culprits…” The Barge, according to A. C. Anderson’s map, was a Native village west of Fish Lake, an early name for Williams Lake.

[May] “Thursday 16th… William, Atnah, who has accompanied Mr. [Donald] McLean, received payment and went off, receiving also a gun on account of furs delivered. I have trusted him two skins upon the gun — say 2 MB.” MB is Made Beaver, the currency of the fur trade.

[1844, November] “Tuesday 12th… We have traded some 30 or 40 beavers during the few past days, from Columetra & other Atnahs; partly for a horse & part in goods.” [December] “Friday 13th… This evening old Columetra, William & the other Atnah arrived, but I know not which they have anything to trade…” On the 15th: “Traded with Columetra’s party, and made the old man & William their usual present as per blotter. I made a long harangue upon the propriety of the Atnahs working martens & pointing out the advantage &c &c all of which will I suppose, have as usual little or no general effect.”

[1845, January] “Saturday 25th. William Atnah arrived. Nothing new occurs.” [February] “Saturday 22nd… William Atnah is also come, ostensibly for advice how to act upon the approach of the pestilence which is now, it is said…” The rest of the line is illegible. This is a few years too early for the measles infestation that killed so many Natives in 1847; it could have been Whooping Cough or another illness. [April] “Thursday 10th… William Atnah & another Indian came here the day before yesterday, but brought nothing. They report that game is now abundant below…” In June 1845, Columetra’s brother, no name given, arrives at the fort to trade some beaver. [December] “Monday 15th… Gave Columetra & William their usual present as per blotter.”

[1846, April] “Saturday 11th… Pere Nobili arrived from Kamloops, likewise Columetra & other Atnahs from the Barge.” Does Columetra come from the Barge? This note is not clear. But according to A. C. Anderson’s 1867 map of British Columbia, the Barge Village stood on the North bank of the Barge River, east of the Fraser River a few miles, and southwest of William’s Lake. Today Anderson’s “Barge River” is Chimney Creek.

[1847] “Saturday 2nd January. Holiday. Columetra arrived yesterday & William, with some other Atnahs today.” Two days later, “The Atnahs of Saturday have delivered in some 30 to 40 beavers, chiefly for horses and guns.” William’s next appearance is very interesting! On April 24th, 1847, “William Atnah & some others arrived yes’day with the views of asking for some seed for the fields, their crops having failed last year. I gave William a large pan full of potatoes with some turnip seed & carrots. The same to Columetra — they traded a few furs as per blotter.” Why is this interesting? I will let you know in my next blog post.

[1848, March] “Saturday 18th… I have supplied Mr. [Paul] Fraser with a riding horse, another for his son…. These horses are to be sent back in charge of William Atnah or some other trustworthy Indian.” [April] “Monday 24th… Notwithstanding all our precautions in regard to the horses,” which were being stolen, “the Atnahs of the Chilcotin Forks have smuggled off two… William, who arrived this evening, gave us this information. We had been seeking for those animals for some time.”

Anderson left Fort Alexandria that spring, and any further mention of William will have to be searched for in later Fort Alexandria journals. But I have a little information about the man, that I found in “Fort Kamloops Journal kept by Paul Fraser, 1850-55,” A/C/20/K12A, BCA:

[1852] September Monday 1st Arrived William the Atnah Little Chief with 4 others  they Came for the payment of their Horses lost last fall by St. Paul on his trip to Fort Hope in quest of part of the new Caledonia Outfit left there.

So I have not connected William to Williams’ Lake, but why do I think that Williams Lake used to bear the name, Lac Columetra? A further search in Anderson’s writing brought me to this:

From Anderson’s unpublished manuscript “British Columbia,” written in the early 1860’s and found in the B.C. Archives: “From Thompson’s River to Alexandria there is a large tract of country of extreme beauty and fertility; abounding with fine pasture, well watered and presenting with intervals of forest a succession of of park like scenes of the most attractive nature… The Lac de Colum-en-let-sa, (or Williams Lake as it is now called) is another beautiful lake of rather smaller dimensions.” That’s close, but not really any help. However, proof that Williams Lake was Fort Alexandria’s Horseguard is also stated in this manuscript: “About Williams Lake, near Alexandria, the nature of the grass is different [than bunch grass], but still very nutritive, and the vetch abounds throughout. In former years the Hudson’s Bay Company’s herd of horses attached to Alexandria, amounting to upwards of three hundred, wintered constantly in this vicinity, under the care of the horse keeper and an Indian assistant…”

So, now, a search through Anderson’s maps for the answer: In his 1867 map Williams Lake is called Lac William, but no other map covers this part of the fur trade district. Nor does Sam Black’s 1841 map name the lake. So I still don’t have the answer. And yet…

So to help me with this, I consulted James Gibson’s book, The Lifeline of the Oregon Country: The Fraser-Columbia Brigade System, 1811-47 [Vancouver: UBC Press, 1997] p. 81: “From Alexandria the horse trail followed the left bank of the Fraser (and approximately the route of the present-day Cariboo Highway — Highway 97), passed the Grand Rapids, and left the river at Le Barge (present-day Macalister?) to skirt White Earth Lake (now McLeese Lake) and cross the Current River, or Riviere a Joseph (Soda Creek?), which entered the Fraser at the Atnah Rapids, or Head of Rapids. From there the pack trail again left the Fraser for First, or Fish Lake (Williams Lake) and followed the San Jose River to Lac en Long (Lac la Hache)….”

The journals which Gibson referenced in his book were dated 1826 and 1831, and they place Le Barge well north of the place where Anderson located it in 1842. Villages move. There are also summer villages for fishing, and winter villages for hunkering down in cold weather and snow, and for enabling winter trapping — perhaps both were called Le Barge? More than that, researchers have to make guesses, and you can see there are a few question marks in Gibson’s record. What if the early trail had run past McLeese Lake to cross the San Jose River west of Williams Lake, and continue southward to Anderson’s Barge village on Chimney Creek and then north and east to the west end of Williams Lake…. I think this was not so, but it is a possibility.

The questions are endless, and sometimes when you ask a question you raise more difficulties that you can immediately deal with. I have one more resource, but the map drawn by Archibald McDonald when he was in charge of the Thompson’s River district [Kamloops] is in the archives and it will have to wait. In the meantime, those who are interested in the man who might be Chief William of Williams Lake Indian band can read what I have given you here, and I hope it has interest to you.

[in 1859] “As word of invading hordes [of goldminers] coming up the Fraser reached Native people in the Cariboo, concern mounted. When aboriginal nations met in the summer of 1859 at traditional intertribal games at Lac la Hache, Chief Dehtus Anahiem of the Ts’ilhqot’in people advocated an alliance with neighbouring Secwepemc and Carrier to deny these strangers entry into their land. In his history, Robin Skelton quotes eyewitness accounts. “‘We must keep these white men out,’ Chief Anahiem said. ‘We tribes must act together….’

“Other chief agreed that the menace was real, but they refused to go to war. Chief LooLoo of the Carrier was convinced that the white man’s “numbers, his guns, his learning and his craftiness” meant Natives could not win in any confrontation. “‘We will not join forces in this useless war,'” he announced. Chief Williams of the Shuswap at Williams Lake agreed. According to Skelton, “Chief Williams said it would be better to trade with the strangers than kill them, for a massacre would be quite useless….[much omitted]”

“But peacemaking did little for Chief Williams or his people. White men moved into their valley, took their land for farms and established the village that would become the city of Williams Lake. In 1862, two thirds of the band, including Chief Williams, died of smallpox. The survivors, led by the chief’s son, known also as Chief Williams, were forced off their land to wander homeless for decades. In 1879 he wrote to the Colonist newspaper in Victoria, “The land on which my people lived for 500 years was taken by a white man; he has piles of wheat and herds of cattle. We have nothing — not an acre.” Only in 1884 was a tract of 1640 acres finally set aside for the Williams Lake Band.”

The Robin Skelton book quoted in Bocking’s book is: They Call it the Cariboo, Sono Nis Press, 1980. It might now be hard to find.