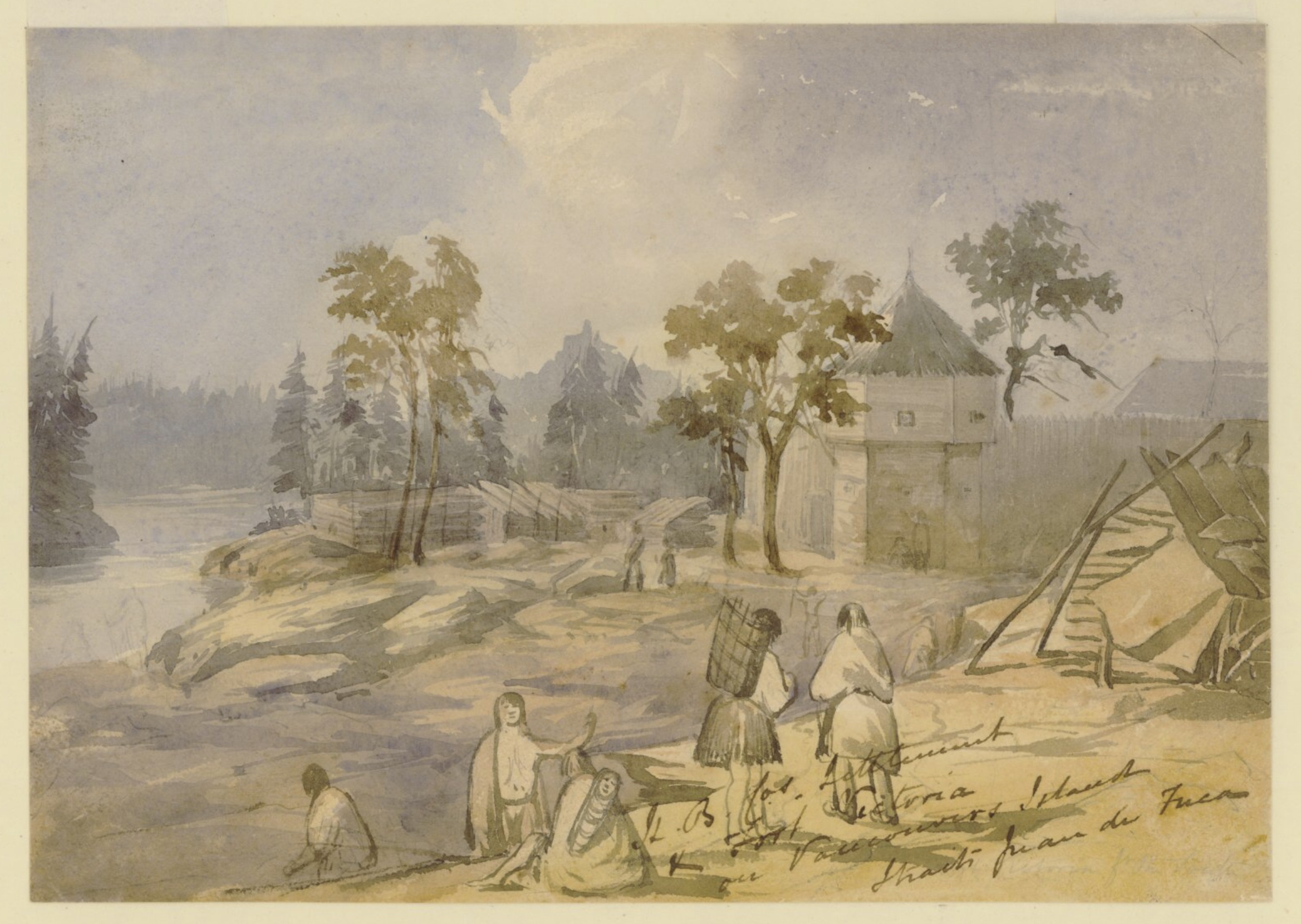 Captain Henry James Warre (1819-1898) was a British officer who, with a Royal Engineer Lieutenant named Mervin Vavasour, visited Forts Vancouver and Victoria in 1845 and 1846. As we know they came to the Oregon Territory presenting themselves as gentlemen-tourists, and engaged in hunting and fishing expeditions, and in travel. But they were there for a more important reason: they came as spies — spying not on the British citizens of the territory (as I had always thought), but on the Americans. It was a critical time in Oregon Territory — a time when the territory, which until the 1840s had been claimed and occupied by the British the HBC traders, was now being settled by an influx of American settlers.

So their expedition to Oregon Territory was, in reality, a secret military reconnaissance mission! Not only that, but the British had also sent two ships to Oregon Territory — the America, and Modeste — as a demonstration of British interest in the territory. And the two ships were also there for a purpose: to rendezvous with the overland reconnaissance mission carried out by Henry James Warre and Mervin Vavasour! That Warre and Vavasour arrived at Fort Vancouver at the same time that the America and the Modeste were present was no accident — it was planned!

So let’s take a look at Henry James Warre’s interesting journal, titled “Sketch of the Journey across the Continent of North America, from Canada to the Oregon Territory and Pacific Ocean.” You can find this journal on the site, “Peel’s Prairie Provinces,” and when you find the home page just enter “Warre, Henry James,” in the search bar and it will bring you to the journal.

“I left Montreal on the 5th May, 1845,” Warre writes, “in company with Sir G. Simpson, the Governor of the Honourable Hudson’s Bay Company, Lieutenant Vavasour, an Officer of the Royal Engineers, and several gentlemen connected with the Hudson’s Bay Company, who were proceeding to their respective stations in the territory belonging to the Fur Company, to which Sir George Simpson was about to make his annual tour of inspection.”

We embarked in two large canoes, made of the bark of the white birch tree, and paddled by fifteen Canadian and Indian “voyageurs,” whose merry voices made the forests re-echo with their “chansons.”

It is amazing how often I find the word, “voyageurs,” in these journals. Many people seem to believe the term, voyageurs, was no longer used. But it was. All the time. And it is quite clear that Governor Simpson often used that word to describe the men who worked in the canoes or boats.

Warre and the rest of the party traveled up the Ottawa River to the Mattawa, “from which we crossed the height of land dividing the tributaries of the Ottawa from Lake Huron; coasted along the Northern shore of this lake; through Lake Superior to the river Kaministiquia, at the North-Western extremity; ascended this river…” In other words, they followed the old fur trade route through Rainy Lake and down the Winnipeg River to Lake Winnipeg, reaching Red River and Fort Garry itself. Then…

Every arrangement having been completed by the 16th of June, Lieut. Vavasour and myself, accompanied by Mr. [Peter Skene] Ogden, a chief trader in the Company, Mr. [Richard] Lane, a clerk, and twelve men, selected from the hardy class of half-breeds and Canadians, commenced our arduous journey on horseback, nor did we reached Fort Colville [Colvile], on the Columbia River, a distance of nearly 1600 miles, till the 12th of August. Want of space, unfortunately, will prevent any entering into the various details of this journey, the difficulties of which can readily be imagined, when it is understood that our luggage and provisions were conveyed nearly the whole distance on horseback, and that we were constantly surrounded  by savage Indians, who owe no submission, save to the superior strength or prowess of the party they encounter. Our daily journeys commenced with the early morn — a compass our only guide! and ended where a sufficient supply of wood and water could be obtained to prepare our frugal meal — a tent our only covering!!

Yes, they travelled west with Richard Lane — the same Richard Lane that we, who research the west of the Rockies, already know. Until 1845 he served as a clerk in the counting house at Fort Garry, and this is his first journey to the west side of the Rocky Mountains.

They visited three forts as they crossed the prairies on their way to Fort Colvile, and one of them was Edmonton House. “From Fort Edmonton,” he writes, “we took a more southerly through the heart of the Blackfoot country (our most formidable enemies), in order to reach a pass in the Rocky Mountains which afforded the easiest and most practicable passage. We were often on the qui vive, from false alarms about hostile Indians, but by the precautions taken, we escaped without any actual encounter…” (It is to be noted that when this journal is printed out, at times the lines at the bottom of the pages are lost).

The pass they travelled through? I thought that they may have used either Simpson Pass or Howse Pass, which are both a little north of the latitudes he gave. However, I find now that it is believed that he used White Man’s Pass, at 50.7791N, 115.4944W. This is the same pass which James Sinclair used to bring in the Red River settlers in 1841, so it was known to the HBC, and specifically, to Governor Simpson. Another thing that is not mentioned in Warre’s journal, but must be mentioned in Father Pierre-Jean De Smet’s narrative, is that in 1846, De Smet met Warre and Vavasour near the summit of the pass.

Another thing to note: although Warre has called Peter Skene Ogden a chief trader in his journal, Ogden must by now be a Chief Factor, as he has just been assigned the job of becoming a member of the Board of Management of the Columbia District, alongside Chief Factor John McLoughlin and Chief Factor James Douglas.

Warre’s journal continues: “From Fort Colvile my party descended the Columbia River in boats, to the Pacific Ocean, a distance of 700 miles, which we reached on the 25th August, having in less than four months traveled the whole continent of North America.” My timeline file tells me that Peter Skene Ogden, Richard Lane, and two British officers (Warre and Vavasour) reached Fort Vancouver on August 26, and that information came from Thomas Lowe’s journals. Lowe also said that they had left Red River on June 15, 1845, and had travelled by horseback as far as Fort Colvile and downriver by boat, having taken 70 days to make their journey. (Once again the dates are out by one day, and it is probable that Lowe got his information from Ogden, and that Warre was out by the one day — I say that because Lowe’s journals have proved very accurate in all other dates.)

Thomas Lowe has also been informed that the two officers are on leave of absence from their regiment stationed in Canada, and have come on a pleasure trip (although they were well equipped with instruments for making geographical surveys, he noted). He has quite a bit of information about them, actually, and we will come to these two spies once again, when we explore those dates in Thomas Lowe’s journal sometime in the future.

Warre’s journal continues: “During the winter’s absence in the Oregon Territory and on the coast of the Pacific Ocean, we employed ourselves in visiting all the accessible parts of the country…

Having obtained horses from the Hudson’s Bay Company, we crossed the forest and prairie land between the Columbia river and Puget’s Sound, to the North. Hiring canoes from the native tribes, we coasted through the beautiful inland sea, and traversed the Straits of Juan de Fuca to Vancouver’s Island, on which the Hudson’s Bay Company have lately established a trading post, where their vessels, which are annually dispatched from England with stores, &c., to carry on the trade with the Indians, will in future load their cargoes, and receive in return the valuable peltries.

Their guide was James Douglas. It seems that the group left Fort Vancouver on September 16, 1845, on their way to Fort Nisqually and Fort Victoria — according to Thomas Lowe’s journal. Lowe also tells us that Warre and Vavasour returned from Fort Victoria on October 16, 1845, with James Douglas still accompanying them. (Peter Skene Ogden knew they were spies: I wonder if the information was shared with James Douglas. I think it must have been.) Warre and Vavasour had remained at Fort Victoria for eight days, according to Lowe. Of course there is no Fort Victoria journal at that time, and so we don’t really know what they did there and when they left. Or at least I don’t know yet! Maybe Warre will tell us in his journal, which continues here:

On the occasion of our visit to Vancouver’s Island we were most fortunate in meeting Her Majesty’s ships America, 50, Captain Honorable C. Gordon, and the Modeste, 18, Capt. Thomas Baillie, by whom we were most kindly and hospitably received. The Modeste subsequently entered the Columbia, and “wintered” opposite Fort Vancouver the principal establishment of the Hudson’s Bay Company…

And the bottom of the page is cut off! But it is very interesting to learn that both the America and the Modeste were off Fort Victoria at time — mostly likely not anchored off the fort but in Esquimalt Harbour nearby, where the other British ships that belonged to the Pacific Squadron all anchored.  And yes, according to Thomas Lowe’s journal, the Modeste was spotted off Dungeness on October 16, 1845, and was actually reported to be in the Columbia River one day later. She would anchor off Fort Vancouver on November 29, 1845, on her second visit to Fort Vancouver.

We will continue this story in the next blogpost. Eventually we will also read Henry James Warre’s journal of the outgoing York Factory Express of 1846 — it will be interesting to see what happens in that year, as we have no other journal for 1846. When the next blogpost in this series is published, you will find it here: https://nancymargueriteanderson.com/whatever-I-choose-to-call-it/

On Mastodon, at @MargueriteHBC@mastodon.social — It’s different…