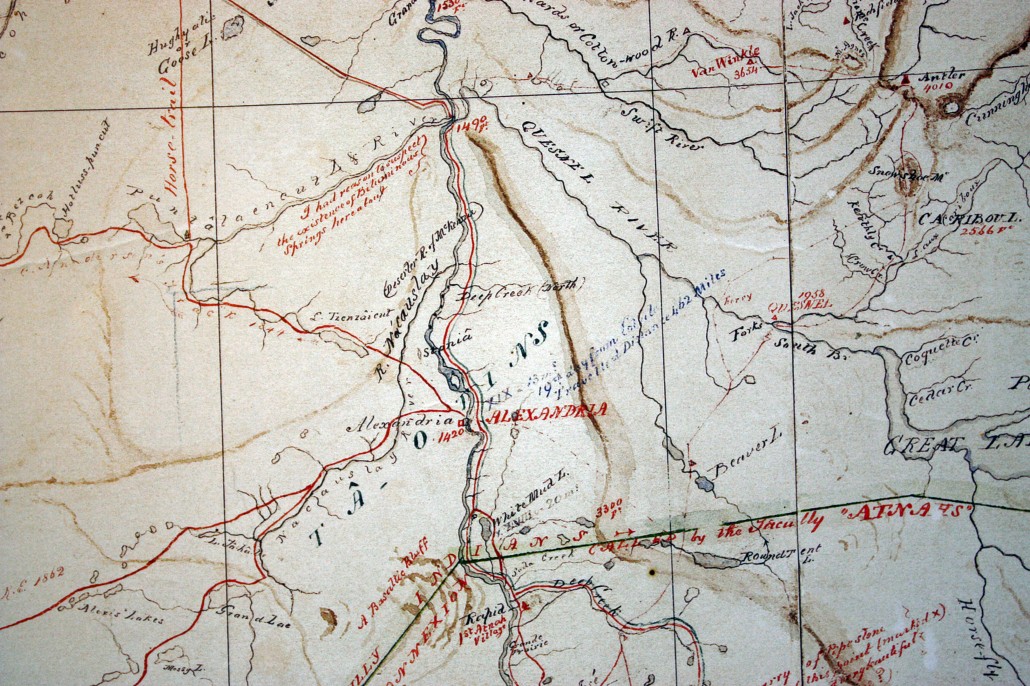 In this post I am now telling the story of the annual brigade journey from Fort George to Fort Alexandria, on the Fraser River north of modern-day Williams Lake, B.C. This is the second post of a series. if you want to catch up on the first post and follow through, then click on this link: https://nancymargueriteanderson.com/brigade-one/

In the first of the two journals, Chief Factor William Connolly has reached the area where Fort George later stood, at the junction of the Nechako River and the Fraser. From that point, we will continue down the Fraser River, accompanying him on his journey south to Fort Vancouver. It is Sunday, May 7th, 1826, and this is the first brigade journey ever down this river.

“7th Sunday [May]. Below this place the Country exhibits some Signs of Spring, which are more evident the farther we advance. At two o’clock PM passed the Westroad [Blackwater] River, and five hours after we reached Quesnel’s River, below which we Encamped. The weather continues fine.

“8th Monday. Pursued our route at the usual hour. At seven we passed Sto-ni-ya and at nine reached the Fort of Alexandria, whither the Brigade had preceded our arrival a couple of Hours, & had delivered their Cargoes in excellent Condition.”

That’s it. He was travelling down the Fraser River, and this river moves when it wants to! At Fort Alexandria, these men will take their boats out of the water and unload them. All the packs will be checked for damp, and loaded onto horses — two ninety-pound packs per horse. But let’s not get ahead of ourselves. Let’s see what Peter Warren Dease has to say. (Peter Warren Dease was the older brother of John Warren Dease, who lived and died in the lower Columbia).

Peter Warren Dease was a very interesting man, with a large career in the fur trade. Interestingly he was mixed-descent, son of Dr. John Dease and Jane French, who must have been a metis descendant of a fur trader. Here is what Bruce McIntyre Watson has to say about Peter Warren Dease’s career.

“Peter Warren Dease, who was as much an explorer and mapper as he was a fur trader, spent five years on the Pacific slopes. Named after a relative, Sir Peter Warren, the captor of Louisbourg in 1745, in 1801 and at the age of thirteen, Dease joined the XY Company, and then the NWC. Upon joining the HBC in 1821, he was given the designation of Chief Trader. On George Simpson’s recommendation, he was attached to [Sir John] Franklin’s second Land Arctic Expedition of 1825-1827. In 1828, he was appointed Chief Factor and spent the next three years in the Mackenzie River district. After his years on the Pacific slopes, Dease and Thomas Simpson made three surveying expeditions between 1837-1839 along the Arctic coast, thus making a significant contribution to the geographic knowledge of the area. He retired in 1842 and moved to a farm at Cote Ste. Catherine outside Montreal in 1843, and died in 1863.” This information from Bruce McIntyre Watson’s Lives Lived West of the Divide: A Biographical Dictionary of Fur Traders Working West of the Rockies, 1793-1858, volume 1, page 318 [Kelowna: Centre for Social, spatial and Economic Justice, University of British Columbia, Okanagan, 2010]

“Tuesday, 10 [May]. Embarked at 2pm, leaving Mr. [William] McGillivray with his Interpreter & 2 men for the summer Establishment of the Post [Fort George], the Brigade consisting of 1 Batteau, 5 men & 5 canoes at 4 men including Roi, put up after sunset. Had a Snow storm but not of long duration.

“Wednesday 11. This morning at 9 am got to the Big Rapid which Ls. [Louis] Paul who was leader of the Brigade was sent to Examine previous to going down the Water being in a fine State. He led the way with the Batteau, the Canoes following each other at a moderate distance. Ls. Paul after having got down Safe with his batteau observed in looking back one of the Canoes taking the Eddy Current too soon, fearing it would be driven against the Rocks turned round to warm them to take Care, when the Sweep oar fixing in the water threw him over the Boat. After a short Struggle the poor man sunk to rise no more. By this melancholy Event I have to regret the Loss of the Best Boute in the District, which cannot easily be replaced. After stopping for some time to Endeavour to find or see the Body but in vain, we proceeded and arrived at Alexandria at 5 PM where Mr. [Alexander] Fisher & his people are all Safe. Received a letter from Kamloops by the return of the men who accompanied the Express, which had got safe to Okanagan, with Assurances that a Canoe will be found at the North River for us & provisions at Kamloops to take us to Okanagan. The horses are all in Excellent order and none lost during the season [he means winter]. Their Agres [Equipment such as saddles, pack-saddles] although not sufficient for the augmentation of returns we have, will I hope with proper arrangement Serve. Gave the leather & Siffleur [Marmot] Robes intended for the Post, & tomorrow will have the furrs [sic] that are on hand made up.

“Thursday 12. This afternoon Sent off Roi with Jean Baptiste Lapierre & 2 Indians to take up 1 Roll Tobacco, 1 Bag Flour, 1 Bag Balls, 2/3 Bag Shott, to be divided between Ft. George, Frasers Lake & Stuarts Lake, for which directions are given to Mr. McGillivray, to make the separation there. Gregoire & others working at Horse Agres. Wrote Messrs [Thomas] Dears & [Charles] Roussain regarding the Transport.

“Friday 13. Preparations making for Departure tomorrow, the Horses Collected and fettered that they may not Stray. The returns of the Post amount to 38 Packs and a remainder with 3 Kegs Castoreum. These are far better than was Expected and procured at much less Expense than less returns have been obtained at. The Natives seem well disposed and are at Same time Kept in order. Not many are on the Ground at present, this being the season at which they go to the Inland lakes to fish & at the same time make Spring Hunts. Lapierre was sent some time back to the Chilcotins, to Explain to them our Motives for withdrawing the men from there in March to do away with any bad ipression it might have made upon their minds. Very few of them were seen, but the visit will have, I hope, a Good Effect upon them as they were told at the Same time, they would be visited in Summer. We are rather short of Horses to enable us to Supply the men with one as they cannot otherwise attend to their Brigades. With all we have there are 6 wanting to Complete the number to mount each man.

“Saturday 14. The Returns of the District being now all Collected and the arrangements for the Summer Establishments taken I shall enter them, as also the trade since Closing the accounts in March belonging to outfit 1831, but taken out with those of outfit 1830 at Present on hand…

“Our complement of Men for the transport is twenty four, 3 of these are indeed so wretchedly poor that they cannot be called Efficient for the Duty they have to perform. The Whole Amount of Returns and the provisions required from hence to Kamloops amounting to upwards of 180 Pieces, the Party was divided into 20 Brigades of 9 horses each 2 men with Exception of Bellicque who had two for one and one Brigade of 6 horses for my Baggage & Extra Pieces with 2 men as Gregoire the Horse Keeper cannot be said to belong to it having to attend to all, when required. Each horse having two Pieces all being ready, the loads were given out and the Whole made a move to break Ground about 2 PM. As much difficulty Existed in putting loads upon Some of the Young Horses not yet broken in, they Expected to get to a little River where the Horses may have Water and good grazing. As their Encampment is not such a distance but I may overtake them Early in the  morning I passed the remainder of the day at the House and will Join them in the Morning. Our deficiency of Men renders it out of our power to Keep up the Chilcotin Establishment but Mr. Fisher intends sending occasionally during the Summer, by which means he will secure their hunts, give them some Encouragement to work in the Expectations of having again the Post established of which they appear to be very desirous. From the General Peaceable behaviour of the Natives I do not think that any danger Exists for any of the Establishments from any of the Natives and I have hopes that they they will Exert themselves to give Satisfaction which they promise to do at the different Posts where an opportunity of hearing their Sentiments offered.”

You can see that these HBC Traders had plenty to worry about: the few men left behind alone among the throngs of Natives that surrounded them; not enough horses for the loads and for the men; necessary replenishment of the provisions; the homemade horse-equipment; the furs that would be damaged by damp; and the dangers of river travel. But they had to make the journey out. The furs must make it to the London markets via Fort Vancouver and its London ships. This is, after all, the business of the fur trade, and the furs they had traded for must make it to market or all their work was for nought!

The next blogpost in this series is now published, find it at this link: https://nancymargueriteanderson.com/brigade-three/