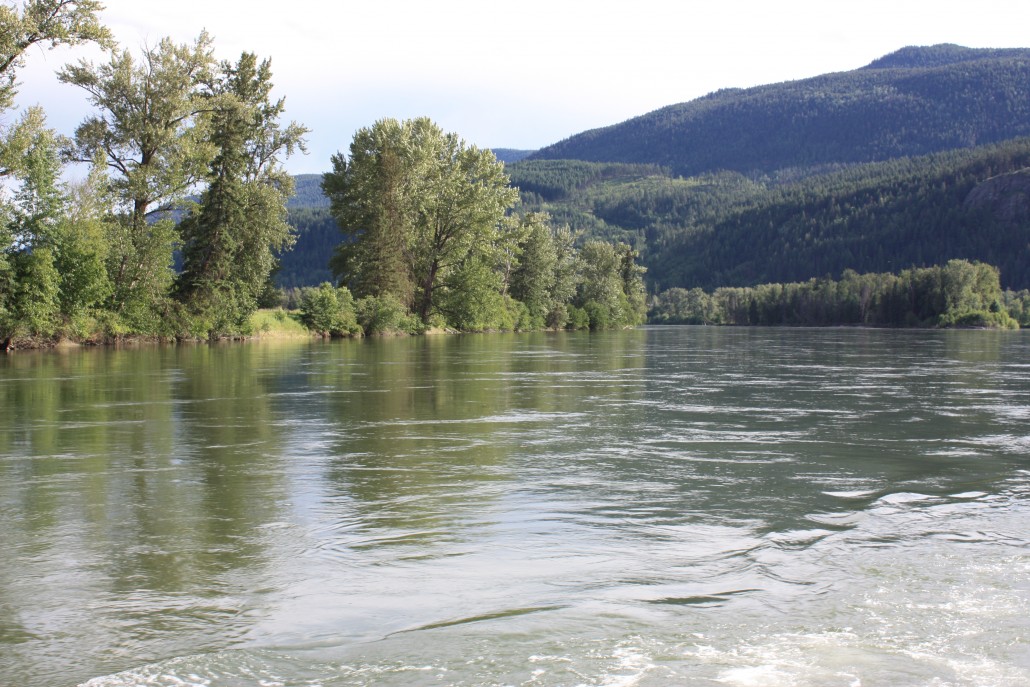 The North Thompson river at Little Fort, B.C., where the HBC men used to cross their brigades. On their return journey they have come up the east (opposite bank) through some pretty rugged country. They will cross their baggage in Natives canoes, and swim their horses across the river.

Today we will continue with our brigade journey north of Kamloops, up the North Thompson River toward the modern day town of Little Fort. Anderson rode over this trail when he entered the district in 1835, with Peter Skene Ogden. He rode out by this trail in 1840: when he returned to the district he came in by the new trail, and the next year, in 1843, that trail was used by the brigades on their journey to Kamloops and south. So, because the trail up the North River was no longer used by the brigades, it disappeared from the collective memory of the HBC men. Thus, we have less information about this trail than about the later trail. However, if you travel Highway #5 north from Kamloops to Little Fort, you are following this trail, at least as far as Barriere.

From William Connolly’s Journal of the Brigade from New Caledonia to Fort Vancouver and Return, 1826:

26th Saturday [August]. Early in the Morning the Horses were Mustered, but before we set off, an Indian who had sold a Horse to one of our Men in the Spring, being dissatisfied with his bargain, or from some other motive, Attempted to take the Horse back, and had the insolence to take hold of him with that intent, for which offence he got what he deserved, a good drubbing: The impudence of these rascals has been too long borne, and to such a reprehensible degree that I am resolved that they shall meet with no unmerited indulgences from me.

Our route [north from Kamloops] was through level country, and at night we encamped a short distance from the Pineau, having baited our Horses at Riviere du Milieu. Distance about 21 Miles. Weather beautiful.

27th Sunday. The road we passed through this morning was excessively bad and fatiguing for the Horses, one of which rolled down with his load from a considerable height into the river, but without having received any apparent injury. Allowed the Horses their accustomed rest after which we proceeded” …on to the Barrier where we put up for the night — A Small Band of Indians we found at this place supplied us with Salmon for supper & for the consumption of the next day. Weather the same as yesterday — Advance about 25 Miles.

28th Monday. Pursued our route at an early hour, and stopped to rest the Horses at the Grand Prairie from when we proceeded…” at [film very scratched] one o’clock PM and at dusk reached the Travers of the North branch of Thompson’s River, where of course we Encamped. The roads were equally as bad as those we passed through yesterday, and this was the longest days march we have yet performed — about 30 Miles. Here we found the old Chief & his Family, who furnished us with an ample supply of fresh Salmon for Supper. I applied to him for Canoes to cross over our baggage, which he promised to bring the next morning. Weather as usual, fine.

Peter Warren Dease’s Journal of the Brigade from New Caledonia to Fort Vancouver and Return, 1831:

7 [August]. Without any accident put up at Pineaux Point.

8. Put up at Grand Prairie, the fire Raging on the Woods. Passed the Barrier when we saw some Indians, who have nothing.

9. Arrived at the Traverse of North River at 10 AM where I found the Old Chief & party with the young horse left in the Spring, the old one Died a few days ago from Old age. Everything was crossed and being no Grazing for the Horses nearer than the swamp Stopped for the night.

I think both men crossed the river near modern-day Little Fort. The “Swamp” is, of course, the Grand Muskeg that blocked their way: and they will pass through the Swamp on their way up the “mountain,” — that is, on their journey up the side of the Thompson Plateau.

Sam Black’s Map (CM/B2079, BCA) indicates a few spots on this river not named in these journals. The first river north of the fort is Bourdignon’s River — probably now Knouff River as it does flow into the North Thompson from the south. Anderson’s map also calls that river “Bourdignon’s.” North of Bourdignon’s River is the “Pines” I think [very hard to read]. “Les Pineaux” appears on one of Anderson’s Maps. I have placed Les Pineaux directly across the river from the outflow of Whitewood Creek, but am not sure that is the correct location. North of “the Pines,” (if that is what Black has actually written), two rivers flow in from the east — today’s Louis Creek, and slightly to the north, the Barriere River. Interestingly, Sam Black calls the river that appears to be Louis Creek, “Barriere.” Anderson’s 1867 map, however, seems to indicate that his Barriere River is the one that carries that name today, as it flows in from the Northeast, not the southeast as Louis Creek does. Both men agree on the location of the Grand Prairie, half way between the two creeks or rivers and the location of the Traverse. I know its very open there, at least on the west bank of the river. The actual “Traverse” seems to be south of one of the creeks that flows into the North Thompson: possibly Montigny Creek, as Montigny is an old name in these parts. In the early years of the brigades, when John Stuart was coming out from New Caledonia for the North West Company, we hear of a man named Montigny in charge of a post on the north end of Okanagan Lake:

It would appear, however, that the North West Company had earlier conceived of such a post between Okanogan and Kamloops: “One of these [outposts] in charge of Mr. Montigny, assisted by a man named Pion, was placed on the peninsula between the two arms of Okanagan Lake, near its head.” It is surmised that the Nor’Westers used canoes on the lake and that the post at the head of the lake was mainly a trans-shipment point.

This paragraph comes from Ken Favrholdt’s UBC thesis, “The Cordilleran Communication,” and the quoted piece is from George Mercer Dawson’s “Notes on the Shuswap People of British Columbia,” in Proceedings and Transactions of the Royal Society of Canada, 1st series, Vol. IX, 1891, Section II, Montreal. I would suspect, therefore, that this man is the father or grandfather of Edouard Montigny, who worked for Alexander Caulfield Anderson for so many years!

We can argue these historic locations and place names forever, and never agree — particularly because there is just not enough material available for review. Secondly, these names moved around (as we see above) depending on the traders or employees that worked in the area. Nevertheless, the more we write about these stories, the more people will talk about them and become interested in their history. And that is what we need.

I understand, by the way, the the trail up the “mountain” behind Little Fort is being explored, discovered, marked, and cleared (work that they have to do every year as it is so heavily wooded.) Keep up the good work, everyone, and don’t let this history be lost again.

To go back to the beginning of this thread, click here: https://nancymargueriteanderson.com/brigade-one/

When the next segment is posted, I will put it here: https://nancymargueriteanderson.com/brigade-seventeen/