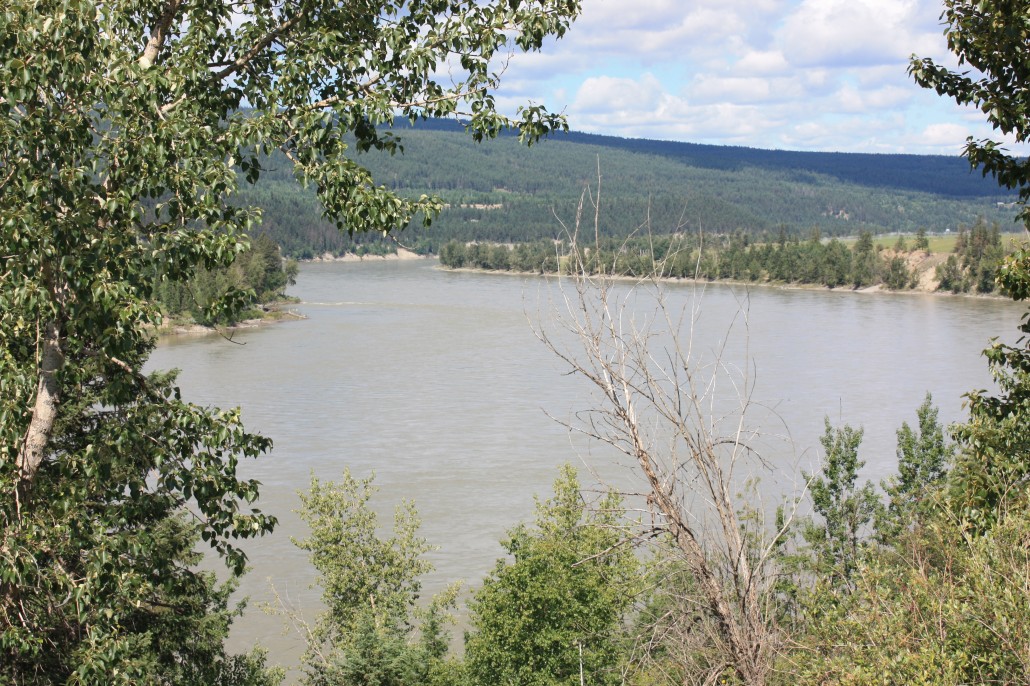 In one of his manuscripts Anderson wrote about the pigs that were at Fort Alexandria when he was there, and how happy he was to see the last of them! I knew of this quote for years and it interested me, but I never thought a story would develop from it. Well, it did!

And its really quite an important story!

Here is the pig story, as I collected it years ago, in Alexander Caulfield Anderson’s draft unpublished manuscript, “British Columbia,” in British Columbia Archives. There is so much important historical information in this manuscript, and it is the most ignored piece of writing that he left behind him!

As the best criterion of the productive powers of British Columbia I will cite some of the statistics of the Hudson’s Bay Company farm attached to the Post of Alexandria, conducted under my own supervision for six years succeeding 1842… Wheat, barley and oats were sown, in the order mentioned, as fast as the ground was prepared: fall-wheat having of course been sown the preceding Autumn. Immediately folllowing, potatoes were planted, generally about the beginning of May. Late in June or early in July refreshing thunder-showers lasting sometimes at intervals for a week or ten days, afforded a favorable opportunity for sowing turnips, which the heat afterwards brought on with great rapidity. The remainder of the time, till the commencement of harvest, was occupied in attending to the gardens and green crops, and laying in a stock of hay for the winter. Fall-wheat was less to be depended upon than the spring variety, for the reason that, if frost came on before the fall of snow the expansion of the surface soil was apt to unroot the growing grain. The crops secured during the years I have mentioned were invariably good. I hae witness forty bushels of the finest spring wheat thrashed from the produce of a measured acre (Canadian) of sixty-six yards square. The yeild of Barley was invariably heavy; that of Oats good, considering the inferior variety we cultivated. All the culinary vegetables throve well. We had in 1847 twenty-six milch cows; and in the spring of 1848, when the writer was removed to the charge of Colvile district on the Columbia, ninety head of cattle, counting the increase of that year, remained upon the farm. Fowls, turkeys, and pigeons completed the live stock. Swine, albeit in many parts a most profitable stock were not raised in large numbers, on account of the trouble attending them when ranging at large. A few were raised in styes for a while, but the breed eventually was lost.* [pages 26-27]

See the Star? On the back of page 26, Anderson made a note, marked by a similar star, that said: “It was an abominable breed — lank, long-legged , and with a snout like a ploughshare, I did not fret much when I saw the last of them disappear.”

So that’s where the “story in my mind” remained until very recently. I had no idea what happened to the pigs, and when whatever-it-was-that-happened happened (if you know what I mean). A letter from Peter Skene Ogden to Governor George Simpson, written from Fort Vancouver on March 15th, 1847, cleared up the matter very nicely, however!

Admitting that we are eventually under the necessity of abandoning [Fort] Colvile [because of the recent placement of the new boundary line between American and British territories, along the 49th parallel], Thompson’s River from its fine soil and climate can easily raise all the Provisions required for the services of transport. One of the great objects in view by adopting this route [to Fort Langley]… is to check desertion. This so far as regards the Columbia will be effected but still the evil will not be removed in respect to Fraser’s River, for no later than last Summer no less than six deserted from Manson. The latter has assigned to us no cause for their desertion: his want of popularity may be one but in my opinion the principal one arises from killing all the pigs at Alexandria last year, and without any just cause for so doing… [D.5/19, fo. 370-71]

Donald Manson’s letter, written to Governor Simpson in February 1847, I can only partly read. He writes that shortage of food caused such bad feelings in his incoming brigade of 1846, that “in our ascent of the Fraser River last Autumn, I was for some time very doubtful, whither I should succeed or not in reaching this place [Fort St. James] with the Boats, and I am quite certain, that had I given them the smallest of complaint, the majority of them would have deserted.” [D.5/19, fo. 295, HBCA]

In fact, a number of men did desert from his brigade, and in July 1847, Governor Simpson wrote to Manson that, “During the days of Mr. [Peter Skene] Ogden, I understand he did much towards improving the condition of the people by attention to agriculture & the rearing of cattle & pigs, whereby they were well fed & made as comfortable as in some of the most favoured posts of the country. I do not mean to say that you do not follow up those improvements, but it is said that the people are not so well off in the way of [provisions] during your administration, & in that case it is not to be wondered at they they are dissatisfied.” [D.4/69, fo. 113, HBCA]

So, this is what we have learned — Anderson killed the pigs in the fall of 1845, or the winter/spring of 1846. The incoming brigades arrived at the Fort on August 23rd, 1846, “and set out in five boats on the 29th afternoon.” Within days Anderson got a note from Manson telling him of the first two of the six deserters from his brigade.

Later that autumn, Anderson mentioned that the crops “all prove very poor owing to the unfavourable season.” Anderson must have provided Manson and his men with food of some sort for his upriver journey, but what was it? Was it the pigs they ate? Apparently not, according to Ogden.

Looking at the year before, I find that 1845 was a good year for the salmon run, but the late summer of 1844 had not been. The Fort Alexandria men might have eaten through their stock of dried salmon sooner than they normally would have done. They may well have then butchered and eaten the pigs. For the most part, the major part of the salmon run did not reach Fort Alexandria before the brigades returned, so that would not have been a part of the provisions provided to Manson for his men. Also, many of the crops of the Fort Alexandria farm were harvested after the New Caledonia men passed through — Barley had been harvested, but other crops, including potatoes, had not been.

So it is a possibility that the incoming brigade men were fed with the disappearing pigs, though it might not have proven to give them enough food to carry them home. But another possibility is that the pigs might not have survived to August 1846. Over the winter of 1845-46 the old Fort Alexandria, on the west bank of the Fraser, was flooded by the river. Anderson moved the fort to the east bank of the river in the spring. It is possible that some of their stock of long-term provisions — the salmon storage, the cavereau or ice-house, and the root-cellar, where their vegetables were stored — were damaged and destroyed by the flood-waters. Anderson might then have had the pigs butchered, rather than bring them across the river to the new location of Fort Alexandria.

But its all guesswork. No one tells us why the pigs were butchered. Whatever the reason was, Peter Skene Ogden made some changes to the agricultural system in the interior. In a letter written by Alexander Caulfield Anderson to Governor George Simpson, on April 14, 1849, I find this:

Smaller parties may pass by either of the other two routes explored by me [the Fraser River, and the Harrison-Lillooet Lakes trail]. That by Harrison’s River would, I consider, answer well for our Spring Express; when the heavy snows would impede the passage by the Brigade (or Similkameen) Road [over the Coquihalla]. A partial evidence of this is, that last spring, Lolo passed by that line of communication (Harrison’s River) & leaving [Fort] Langley in canoes with a retinue of 30 swine, reached Kamloops in about 15 days, having left his charge to recruit within three days march of the Fort. Hiss loss on the way up amounted to 3 only.  D.5/25, fo. 121, HBCA]

So the pigs that I ignored for so many years suddenly became an interesting part of my Brigades book!I am sure I will learn more. I wonder what the Fort Langley journals on this? I don’t know, but the Fort Victoria Letters have something to add:

The farm at Thompson’s River has been enlarged. There are about 102 acres under seed, which with moderate success will furnish the interior with bread stuffs. There are 142 head of horned cattle, besides the calves of 1850, and 28 pigs. [Fort Victoria Letters, 1846-1851, HBRS, p.111]