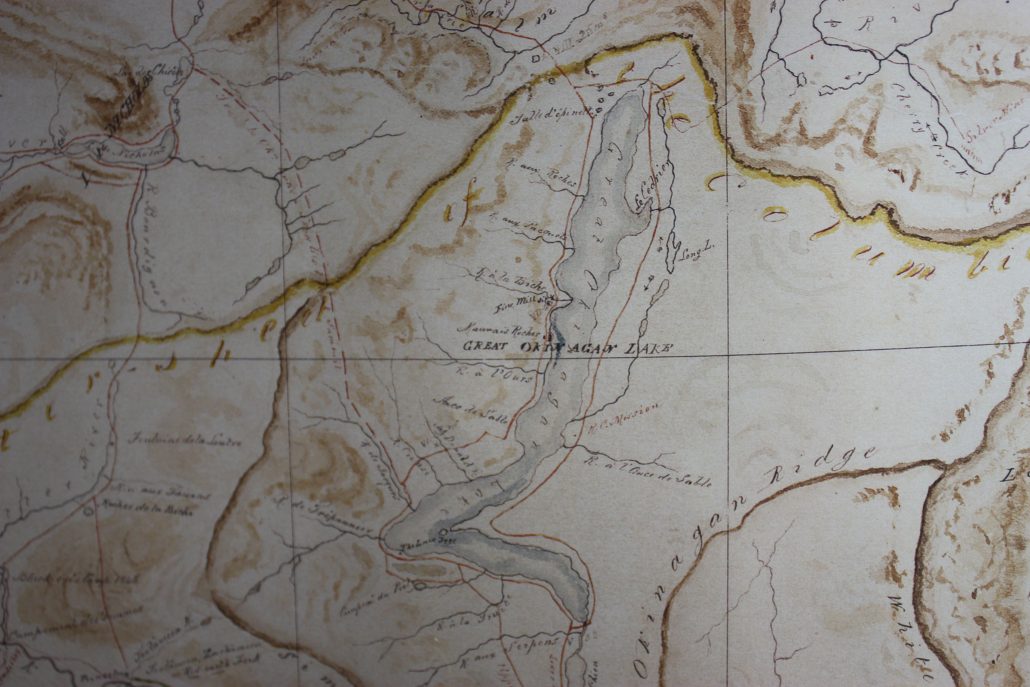 The Lone Tree was a major landmark on the shores of Okanagan Lake north of Prairie de Nicholas, and a place where these men might have camped. The Lone Tree is shown on A.C. Anderson’s 1867 map of British Columbia. Whether or not it is mentioned in these journals I do not know yet: we will find out together.

However, just reading the first paragraphs of the next journal I am hoping to post, I find the words “the Bute.” If you are reading my more recent posts on Green Lake, I have spent some time searching for Buttes — to find another one here is a bit of a shock. However I almost immediately found an answer in a book I have recently purchased: Richard Canning’s Roadside Nature Tours through the Okanagan: A guide to British Columbia’s Wine Country [Greystone Books, 2009]. Under a photo of “the butte,” from across the lake, Canning has written: “The long dark ridge of Giant’s Head in Summerland is an old volcano active about 55 million years ago when the Okanagan Valley split open.” As I said, the problem is not solved, as the Giant’s Head cannot be the butte in this post. But where there is one butte, there is another a little to the north — and what is “Antler’s Saddle?” This sounds like a highland, does it not?

Well, I looked it up, and it isn’t a highland: its far more interesting than that. You should take a look at this page if you are interested in the brigade trails: www.hctf.ca/communications/blog/entry/ritchie-lake-wetland-restoration-from-bad-to-rad

So that is a little diversion, perhaps. I still don’t know which height of land Connolly called a “bute,” but someone will almost certainly let me know or I will find out for myself. Here we go, with Connolly’s journal.

20th Sunday [August 1826]. On mustering the Horses this morning two of them were missing. Immediate search was made for them, and in the Course of an hour they were brought back. This accident retarded our departure beyond the usual hour…

Yes, they are in a country that is occupied by Natives who loved to steal their horses, but this is probably not the reason the animals were hard to find. Young James Anderson, who traveled out with his father Alexander Caulfield Anderson, in the 1849 Fort Colvile brigade, wrote this:

At the first appearance of dawn the cry of “Leve, leve” [get up, get up] is heard and with many a yawn and many a sigh we turn out and immediately all is bustle and whilst breakfast is being prepared the horses are rounded up and in an incredibly short space of time the tents are struck, packs loaded and the day’s march begins. In spite of the fact that the horses are hobbled, it sometimes happens owing perhaps to scarcity of feed or an extraordinary pestilence of flies and mosquitoes, that they will wander far afield and before they can be rounded up, perhaps half a day is lost. The impatience of the gentleman in charge under such circumstances can better be imagined than described; as he would glance every few minutes at his watch and impotently pace the camp ground probably thinking unutterable things… [James R. Anderson, “Memoirs,” copy in author’s possession but also in B.C. Archives].

The gentleman he is describing is his father, Alexander Caulfield Anderson. But let us continue with Connolly’s journal:

In my French dictionary ‘Borgne’ means “Blind in one Eye.” As the Riviere Creuse has overhanging banks on its south side, can this be how it got its old name of “Riviere aux des Borgne”? In its upper reaches today’s Riviere Creuse is called Powers Creek, and it flows into Westbank more or less from the west.

In addition to Powers Creek, there is a second river that flows into Westbank from the north, called by the HBC men McDonald’s River: today called McDougall Creek. It will probably have been named for Archibald McDonald, later of Fort Colvile, who spent a few years at the Kamloops post.

L’Ance au Sable was where the town of Westbank now stands, and its name means “Sandy Cove.” [The name, L’Ance au Sable, is also immediately across the lake where Kelowna is today, but the sandy cove at Westbank is where these men would have stopped].

So somewhere behind or to the north of Westbank is the “Bute,” which I have not yet been able to identify. But when I look at the map, I can guess that Connolly’s “Bute” — see below — is Blue Grouse Mountain, just north of Bear Creek Park:

In the afternoon proceeded to the Bute, where we Encamped. Distance about 24 miles. Weather the same.

21st Monday. Before reaching the Mauvais Rocher [“Bad Rocks”], the Horses were allowed to rest. In the afternoon we went on, & in passing the above mentioned place one of the Horses Slipped and fell over the precipice, where he was literally dashed to Pieces. His load, consisting of two Bales of dry Goods, received no other injury than having the Corners very much torn. This misfortune having roused our attention, this dangerous spot, Where several accidents of the same nature as just described have already occurred, was so far improved in the course of half an hour, as to divest it of all its terrors, and the Remainder of the Brigade passed it in safety. Encamped at Riviere a la Biche at an earlier hour than usual. The excellent feeding we found here, and of which the Horses have been deprived for some days, will fully compensate for the few Hours we lost. Distance today 20 miles. Weather as usual.

Riviere a la Biche, or Doe River, is Shorts Creek, which flows into the lake at Fintry.

22nd Tuesday. At an early hour commenced our march, passed Riviere au Paquets [Whiteman Creek] and rested for a few hours at Mr. Jacques Encampment. In the afternoons march we passed Riviere de Squires, Riviere de Birges, and Encamped at Riviere de Talle d’Epinette, where we found excellent feeding for the Horses.

The creeks that flow into the north part of Okanagan Lake are, from the south to north, Naswhito, Equesis Creek, Bradley Creek, Newport Creek, and finally, Irish Creek at the very top of the lake. The trail did not go to the top of the lake, and so it may be that Stony or Rochers Creek is the Naswhito; Equesis Creek is Riviere de Squires, Bradley Creek is Riviere de Birges, and the Riviere de Talle d’Epinette, where they left Okanagan Lake, is today’s Newport Creek. Just to be clear: we just don’t know, or at least I don’t know for sure.

Our route today was particularly rugged, & fatiguing to the Horses. Distance about 25 miles. Weather the same.

23rd Wednesday. A Heavy Shower overtook us at Lac en Rond where it detained us for four Hours…

Lac en Rond is today’s Round Lake, and this is where we will stop today.

It looks a little like I forgot to bring Peter Warren Dease all the way to the Lone Tree in my last post. Well, I will do it here:

31 [July 1831]. Passed Beaver River, Trout River & Stopped at Riviere Prairie de Nicholas [Summerland] from whence we put up at the Tree along the Lake [which is closer to Peachland than Summerland].

2. Stopped at Riviere la Biche [Doe River or Shorts Creek]. The roads in this part bad, 2 horses broke their loads, by which 1/2 bag Flour & 1/2 Bag [Indian] Corn were lost not having good Wrappers for such Pieces & the Cords very bad.

3. Passed Okanagan Lake. Stopped at Lac Rond. On passing the strong woods [probably Talle d’Epinettes] found fire Raging in all directions, and had to pass very near it, the smoak so thick as almost to darken the atmosphere. Some of the Horses were Sore galled, 2 of them were unloaded…

So we are now at Round Lake, just north of Lake Okanagan and on the way to Kamloops. There is a book of maps of the Brigade Trail published some years ago, and written [I believe] by Harley Hatfield. In it there is a list of distances from A.C. Anderson’s map, and I will give the distances for the Okanagan Valley. The book says that “Anderson probably stopped at every second campsite; brigades could not travel 30 miles per day.”

It was 30 miles to Testalinden Creek [Tea River] from Horseshoe Lake, in modern-day Washington state. From the HBC’s Tea River to modern-day Penticton Indian Reserve, near the church, it was 32 miles [by the newer trail that left the Okanagan River banks, that is, Dease’s trail]. From that campsite to McDonald’s River [McDougall Creek, Westbank, B.C.] it was another 34 miles. From McDonald’s River to the south of side Riviere Biche, now Shorts Creek, it was 20 miles — perhaps one day’s travel if the travelling was good. Another 25 miles would bring them north of Okanagan Lake to the Salmon River crossing.

And what was it like when the brigades reached their chosen campsite? Young James Anderson has that story as well:

A description of the order of march of the Hudson’s Bay Company’s brigades, as they were called, may here be given. Preceding everyone else, the gentlemen in charge rides; his duty was to keep the track and should anything occur by which the trail becomes impassable or hostile natives appearing, to halt the brigade in time. Next is a superior servant whose duty it is to keep up communication between the officer in charge and the brigade…. Then follow the pack animals conveying the necessary impedimenta in the shape of tents, provisions, bedding, etc; then the first detachment of what was known as the brigade consisting of a certain number of pack horses attended by two men and then the second and possibly a third detachment. The finding of a suitable camp where water and fodder were obtainable often entailed a long wearisome day’s journey over arid plains; on the other hand it sometimes happened that in order to reach suitable locations, a short day’s march compensated for the possibly long day preceding or following. On dismounting, the first duty was to light a fire and for this purposes the flint and steel were altogether used as matches were non-obtainable in those days; the few that I had seen were looked upon as curiosities and only used on very rare occasions as an exhibition of the white man’s power among the natives. The weary pack-horses as they arrive on the ground quickly recognize that the resting place is reached and as soon as the packs of furs are removed, take a roll and then devote their energies to feeding or if flies and mosquitoes are much in evidence, crowd round the smoke of the camp fires. Tents are pitched and soon the evening meal is ready, the seniors smoke a pipe, the weary youngsters tumble into bed and ere long the camp is wrapped in sleep. [James R. Anderson, Memoirs, as above].

To go to the beginning of this thread: https://nancymargueriteanderson.com/fort-st-james/

If you want to see the post that immediately precedes this, once again the Okanagan Valley, go here: http://nancymargueriteanderson/brigade-thirteen/

When the next post is written, it will appear here: https://nancymargueriteanderson.com/brigade-fifteen/

2 thoughts on “Brigade Journey North of the Lone Tree”