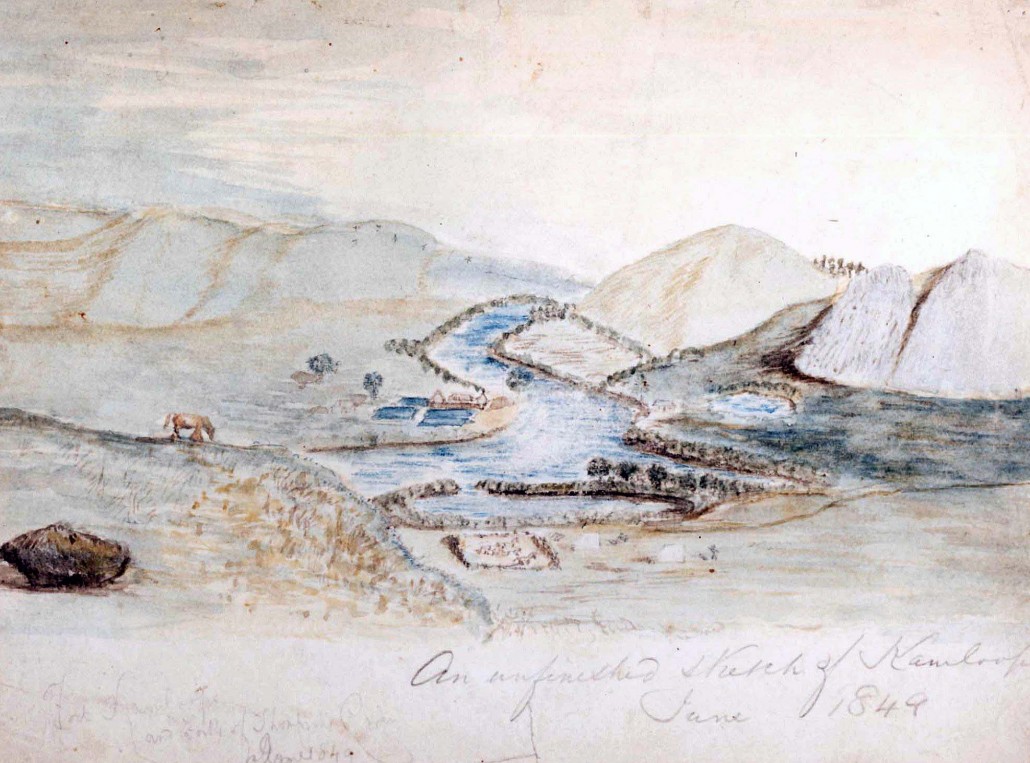 I received a message the other day, from a member of the Simpcw First Nations. These are the people who occupy the territory around Little Fort, north of Kamloops on the North Thompson River. They are Secwepemc (what most would call the Shuswap if they didn’t know the modern Native name).

Anyway, this person has been looking for information on the brigade trails in that area, and he stumbled on my last brigade trail post that brought us from Horse Lake to Little Fort. Unfortunately, Alexander Caulfield Anderson’s 1867 map does not show the location of the old brigade trail over the Thompson plateau. When he drew his map, this section of the brigade trail had been replaced by the trail that ran south through Green and Loon Lakes and the Bonaparte River.

Sam Black’s amazing map does show the old trail, however, but I don’t have permission to publish it (though it is probably not hard to get that permission). [A copy of Sam Black’s map is in the Vernon Archives]. Another map that this person might find useful is Archibald McDonald’s Map of the Thompson District, in the B.C. Archives. I do not have a copy of this map, but it might also show where the old brigade trail over the Thompson plateau ran.

I am glad to see this interest in the brigade trails. So to see if there is anything further that might of interest to him, I am continuing the journey from modern-day Little Fort, down the North Thompson River to Kamloops. There was no fort there in those early days, but one would be built there is the 1850’s. Yes, I could actually write about it, and I probably will do so, sometime.

But first, Here is Chief Factor William Connolly’s outgoing journal of the 1826 brigade, as they head south from where the Little Fort would be built years later. The first part of the journey would involve transporting the goods across the river, to its rugged east side. But it was easier to go down the east bank than the west. This is rugged, rocky country.

“21 Sunday [May] The two Canoes being of sufficient size to carry a considerable  proportion of our Baggage, they were loaded with each with 12 pieces, manned with two Men & immediately sent forward for Kamloops, which without much exertion they can reach today, as they will descend the current which is very strong. By 8 o’clock AM our Horses were all crossed over to the south [east] shore, and having a considerable number more than are required to carry our Property, the weakest were therefor not needed, and will be allowed to go light until they recover strength, & in their turn will occasionally relieve others who may fail along the way. At nine o’clock we left our Encampment & proceeded along the Banks of the North River which are extremely rugged and fatiguing to the Horses. At one o’clock PM we reached a small plain where I resolved on passing the remainder of the day, in drying the Furs that were wet & for which purpose the weather was particularly favorable. A thorough examination of the Packs was made, and a smaller quantity of Furs was found wet than I expected. At Sun set they were all dried & repacked. And at day break:

“22nd Monday. The Horses were collected, and as soon as they were loaded we set off, and at 10 o’clock we reached the Barriere [Barriere River at Barriere, B.C.], where [there] was a camp of Indians from whom I procured a sufficiency of Trout, for a meal to the whole Brigade, in exchange for Tobacco & Ammunition. After allowing the Horses four Hours rest we continued on through a country equally as bad as that of yesterday, & got to a place called the Pineaux, where we Encamped at Sun set.  The weather was Beautiful & vegetation being here in full vigour the horses have therefore excellent feeding.

“23rd Tuesday. Set off at the usual Hour, and proceeded without Halting until two o’clock PM when we arrived at the Fort of Kamloops, where we found Mr. [Francis] Ermatinger & the people with him all well. The people I sent down with the canoes arrived on the day expected, & delivered their Cargoes in good order. The horses from Spokane [House] which are here are fat , but from bad usage on their way from Okanagan [House] to this place, they have very sore backs, which is even worse than being low in flesh. However, with the number here to be added to our own we will certainly get to the end of our Journey without much Trouble. The Horses that were borrowed from the Indians were all returned, and the nine [?] paid for, which amounts to a sufficient sum to have purchased, at least, one half of them. This expense will I trust not again occur, And under all Circumstances I may consider myself very fortunate in being so far on my Journey with the Returns, and without any apprehension of meeting with further difficulties. In the morning the weather was fine, but towards evening it rained.

“24th Wednesday. To allow our Horses a complete rest & Mr. Ermatinger to make the necessary preparations for his departure from hence with all the property at this place, I determined on passing the day here. But towards evening Every thing was crossed over the South Branch of Thompson’s River, to avoid any loss of time tomorrow. From the uncertainty in regard to the probable period of my reaching the Banks of the Columbia, Mr. [John Warren] Dease I am informed had resolved on retaining his people at Fort Colvile until he should hear from me. It is therefore necessary in order to avoid any further loss of time, to forward to him information of our movements. I, in consequence, addressed a few lines to him acquainting him therewith and requesting that his people may find themselves at Okanagan [House] by the 5th Prox, at which period I expect to be there. With this Dispatch Mr. Ermatinger will proceed a head to the Little Okanagan Lake [Osoyoos Lake], from whence he will forward it over land to Mr. Dease, and there is no doubt if due expedition is made, that it will answer the intended purpose. Rained considerably throughout the Day.”

Beginning at the banks of the North Thompson River: “Sunday 22 [May]. The Horses were Collected & Crossed. Hired the Indians Canoe for the purpose of Crossing at the River below Called the Barrier [Barriere] and at same time to relieve some of the Horses that are much fatigued. Sent down Thomas Tehontawaswse & Louis Jeronquay with the Canoe & 6 pieces to wait for us at the Barrier. Having lost some time Crossing the Horses we put up at a large Plain about half way to the River mentioned.

“Monday 23. Got to the River about 10 AM, where we were joined by the men with the Canoe, the stream being very swift, and Canoe containing but 7 pieces at a time, with 2 men, occupied the Remainder of the day — here we found some Indians, who traded a few Carp [Northern Pikeminnow, Sucker, or similar minnow] & trouts.

“Tuesday 24. Some time was taken to Collect the Horses this morning, part of the way being very bad along the River, going over a Point of Rocks which is dangerous on account of broken stones, ascending and descending on each side of the Rocks, very steep. One of the horses with his load of Packs rolled down from a height of about 80 feet & fell in the River. Fortunately received but little hurt by the fall and swam down to an Eddy where the Packs were taken off safe and the Animal got ashore. The Packs were dried, and we put up for the night below the Pineux.

“Wednesday 25. Reached Kamloops about midday. Found Lolo in charge of the House, and is to proceed with us to Okanagan. Took 1,008 Salmon for our voyage hence to that Place & with the assistance of Some Indian Canoes hired, All the Baggage & horses were Crossed over with the Exception of those of this Place, that will be crossed in the morning. Two horses were hired from Indians of this Place for the voyage to & from Okanagan at the rate of 10 M[ade] B[eaver] value for each. The Property remaining was put in Security by Lolo and an Indian appointed to take care of the Establishment until our return, which he promised to do. Rained in the afternoon.”

The “Lolo” mention in this journal is a very important man in the fur trade at this time. This is his biography, from Bruce McIntyre Watson’s books, Lives Lived West of the Divide. His name is John Baptiste Leolo, and he is also called St. Paul. He was born in 1798, and was possibly Native or Mixed descent. He may have been Iroquois.

“Jean Baptiste Leolo, who first appeared on record with the HBC in 1822, was a free spirited, independent and talented figure in the New Caledonia region. He was a trusted HBC employee who appeared to work on and off when needed and whose daughters intermarried into various levels of the fur trade at various locations. Added to his responsibilities, he was sometimes given enforcer duties to carry out such as, in 1831, tracking down and cutting off the tip of the ear of the lover of Francis Ermatinger’s errant wife. Leola, aka Mr. St. Paul or Captain St. Paul, and his family gravitated to the Kamloops area and when the Kamloops fort was moved in 1843 to the north east [north west, actually] point of the river junction, the Company rewarded Leola by building him a home on the old fort site. From there he traded on his own and bred horses. After his death in 1868, his home became part of the village on the Kamloops Indian reserve.

“Details of Leolo’s family have not been traced however, by 1827, he had a wife and two children. One daughter married Jean Baptiste Vautrin [who worked under A.C. Anderson at Fort Alexandria] and another John Tod.” Leolo’s name is remembered today. “Mount Paul (near Kamloops), Mt Lolo, Paul Lake, Paul Creek and St. Paul Street [Kamloops] are named after Jean Baptiste Leolo.”

The next section of this journal is now available, at https://nancymargueriteanderson.com/brigade-six/