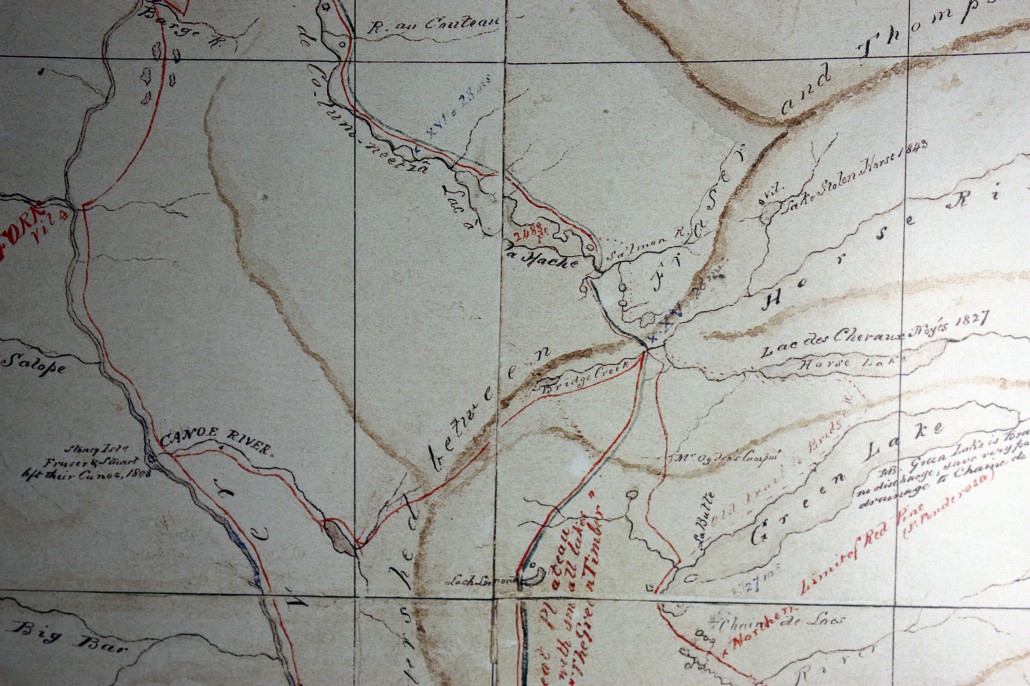 The country between Lac la Hache, Drowned Horse Lake, and Green Lake. CM/F9 Courtesy of the Royal BC Museum, BC Archives. Detail from original map.

I find that, entirely by accident, two threads (stories) I am telling merge at the same place: at what the HBC men called Bridge River! But, as you can see from the map above, it is not today’s “Bridge River.” What they called Bridge River then, is today’s Little Bridge Creek. This is the creek that flows out of Holden and Little Holden Lake, though or past Exeter Lake, before flowing into into modern-day Bridge Creek a little north of the modern-day town of 100 Mile House.

I noticed as I followed David Douglas’s path north from Green Lake via his cattle drive (See https://nancymargueriteanderson.com/cattle-drive/  for more information on this historic cattle drive), they seemed to touch on the south side of Horse Lake and then continued west, traveling well beyond the west end of the lake itself. After following the winding stream for some distance, they crossed it to its north shore. Douglas did not indicate another stream falling into the stream they followed, and so probably they traveled far enough from the river so he did not see the junction of the two streams. He was unaware that there was both “Horse River” [today’s Bridge Creek] and “Bridge River” [Little Bridge Creek], and that one flowed into the other. If they had crossed the Horse River [Bridge Creek], of course they would have had to cross it twice: they did not.

At this point, I am suggesting the incoming brigades crossed Little Bridge Creek west of Exeter Lake, but I might be wrong. In his maps, botanist David Douglas did not indicate that a lake was there. So I looked at Sam Black’s map, which is fairly hard to read. His trail appears to follow the south shore of Horse Lake and goes some distance beyond, and then crosses the Little Bridge Creek just east of Exeter Lake, or another lake.

To confuse the issue, Black has a number of other trails drawn in — were these Native trails? One went directly north from Green Lake to Horse Lake, perhaps by Eighty-Three Creek. Another traveled north east in a straight line, apparently across the range of hills to the middle of the south shore of Horse Lake; a third rounded those hills and ended up on the east end of Horse Lake, connecting Green Lake with the old brigade trail from the “mountain,” that passed over the north shore of Horse Lake at that time. A fourth (and most interesting trail) went across country from the mouth of Eighty-Three Creek, in a straight line north west to Jose’s River, arriving there on what appears to be the west end of Williams Lake (or maybe west end of Lac la Hache)! This one he labeled “Proposed Road to Jose’s River.” I doubt it ever existed, or that it was even successfully explored. Certainly Sam Black never explored it, as far as I know.

So Sam Black’s map, though interesting and full of little bits of information, can throw a wrench into any brigade trail information. He died in 1841, and this map (CM/B2079, BCA) is dated 1839, more or less. We also have to remember that this was the working map for the Kamloops post, and that any of these trails might have been added by John Tod, or anyone else, long after Sam Black’s death.

The next map to look at is A.C. Anderson’s 1867 Map of British Columbia, which has little information about the old brigade trail up the North Thompson River, and much more about the 1843 trail from Kamloops to Green Lake. For more information on this 1843 trail, see the posts beginning here: https://nancymargueriteanderson.com/1843-brigade-trail/

Interestingly, Anderson’s map also clearly shows the brigade trail crossing Bridge River [Little Bridge Creek] east of Exeter Lake. He also has drawn in a shaded line, which indicates the separation between the waters of the Thompson district flowing east, and waters of the Fraser flowing west. East of Exeter Lake, along Little Bridge Creek, there are two XX’s and a V drawn in — are there cliffs along the north bank of Little Bridge Creek, or does that mean something else? If Little Bridge Creek runs next to steep cliffs on its north side, then they crossed the stream west of the bluffs, it seems. The trail then passes west of what appears to be 101 Mile Lake, and 103 Mile Lake, but east of what appears to be today’s Savon Lake. Comparing Anderson’s map with modern maps, it appears that the railway line is following the 1843 brigade trail north at this point, which makes sense. New trails follow old.

So, where’s Watson Creek? Anyway, I looked it up in my ancient Gazetteer of Canada, and it tells me that Watson Creek flows “N.W. into 111 Mile Creek, SE of Lac la Hache, Lillooet District.” That sounds likely, and when I look at my map I can see the railway line runs through Walker Valley into Watson Creek, which leads almost directly to the south-east end of Lac la Hache. From the same source: “111 Mile Creek flows N.W into Lac la Hache, Lillooet District.” So now we know where the 1843 brigade trail ran: James Gibson’s information was good.

Or it was good, to a degree. James Gibson indicates that Salmon River was the same creek as Watson Creek — but on Anderson’s map, Salmon Creek and Watson Creek were in different places, though both flowed into the east end of Lac la Hache — one from the south, and one from the east. It might be that Anderson knew that other river as Salmon River, or it might be that Gibson did not know for certain whether the trail traveled up Watson Creek or Salmon River. Trails change courses, and perhaps over the years they traveled both routes. On the other hand, rivers are known by different names, too. Perhaps Anderson’s name for Salmon River was a later name that was switched from another river: perhaps both were known as Salmon River. There are a dozen reasons for the two Salmon Rivers. All I can say is, that according to A.C. Anderson’s 1867 map of British Columbia, it appears that the brigades came in by Walker Valley and Watson Creek. Which means that the old brigade trail from the mountain might have run along the Salmon River, or it may have come up Walker Valley and Watson Creek, as the later trail did. Trails do move around.

If the old brigade trail came up the westward flowing “Salmon River” [Anderson’s map] to Lac la Hache, I don’t think I have a map that tells me what the modern day name of that river is, and there is no Salmon River listed in that district in my Gazetteer. So, another question.

We don’t actually know if we have already stumbled into the old brigade trail, or whether we reach it at the end of Lac La Hache. If the railway line is following the brigade trail to Lac la Hache, then the highway runs to the north of the valley, or more likely behind a range of hills, to 100 Mile House. When I traveled up here in 1993, I didn’t have the information that I have now, and so I don’t have a good picture of this landscape. I admit I am surprised to find where Anderson’s trail ran, and would enjoy hearing your opinion on this. I wouldn’t mind having the modern identity of the Salmon River, but my maps — and my eyes — are just not good enough to uncover this information.  Get out your maps, see what you can discover!

I have more questions than answers in this post. So might you. Did you find the “Stolen Horses Lake?” I wonder how it got its name.

Nevertheless, and it doesn’t matter how we got there, we have reached the east end of Lac la Hache, or “Axe Lake.” Does anyone have a story that tells us exactly how and when this lake was named? Obviously it has something to do with an axe, but is the origin of the name known? It has to be named that well before the 1840’s, and probably up to twenty years before that!

More questions than answers, as I said. The next post in this series is now published, and found here: https://nancymargueriteanderson.com/lac-la-hache/

One thought on “Bridge River”