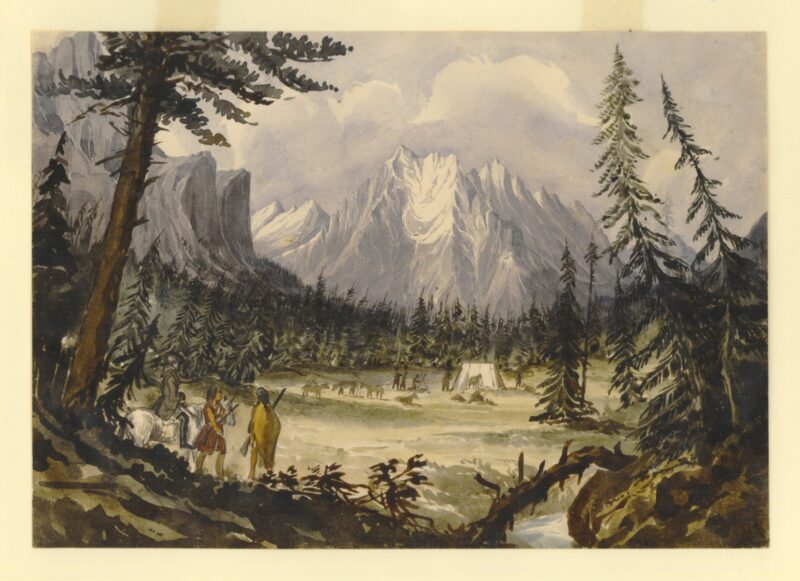 Boat Encampment, Painting by Henry James Warre, Courtesy American Antiquarian Society. You will see here mountains, men and their tents, horses, and boats (although its a little hard to see the boats in this image). Boat Encampment is the only place in the territory west of the Rockies where these three or four things will be found at the same place.

This blogpost is a continuation of the Paul Kane thread, wherein he is travelling out of the territory West of the Rocky Mountains with the Fall Express. The year is 1847: he and his Express party will reach and pass through Boat Encampment, at the Big Bend of the Columbia River. Here he will meet Thomas Lowe, who is returning to the Columbia District with the incoming Express from York Factory (now called the Columbia Express). Kane will also record some of the traditional ceremonies the Métis and Iroquois men practiced, used to forecast the arrival of the incoming Express at Boat Encampment.

But first we have to get there. As you know, I left the Fall Express men at the Littles Dalles Canyon, where Revelstoke now stands. On October 2, he wrote: “We passed the Upper Little Dalles, a very long and rapid shoot of three or four miles.” Yes, there are four rapids, one after another, in a long canyon called the Little Dalles Canyon, and the northern most rapid in this canyon is today’s Steamboat Rapid. His journal continues on October 3:

Saw four cariboos [caribou], a species of deer of the ordinary size, which we followed, but without success, as they got the wind of us before we could approach them within gunshot. We fell in with the Indian chief of the lakes and procured some bear’s and deer’s meat from him, of which he seemed to possess a plentiful supply. A small species of dog was tied to the bushes near his lodge, to prevent them from hunting on their own account and driving away all the deer. The chief told me that when disposed to hunt with them, he had only to find a fresh deer-track, set his dogs on it and lie down to sleep, as they never fail to find the deer and turn them back to the place where they had left him lying. We saw some of these dogs, apparently on the track of some deer, full twelve or fifteen miles from the chief’s lodge.

October 4th. The chief, with wife and daughter, accompanied us in their canoe, which they paddled with great dexterity, from ten to fifteen miles. They make their canoes of pine bark, being the only Indians who use this material for the purpose; their form is also peculiar and very beautiful. These canoes run the rapids with more safety for their size, than those of any other shape. The chief and his ladies breakfasted with us and then bid us good bye.

These will be the sturgeon nose canoes of the Columbia River, I believe.

We camped that night below the Dalles des Morts, or the Rapid of the Dead….

October 5th — It rained so hard throughout the day and night, and the river was swollen so much, that we despaired of hauling the boats up the rapids and therefore remained until the following morning at our encampment.

October 6th — It was a lovely morning. Saw some cariboos, but could not approach them near enough for a shot. We had a magnificent view of the Rocky Mountains in the distance, in all their azure grandeur. The flood soon subsided sufficiently to allow our ascending the rapids, although it took us the whole day to haul the boats up — the distance is not more than three miles — but the boats were so strained and tossed about in the operation, that we were obliged to haul them ashore and grease their bottoms with the resin which exudes from the pine…

October 7th — We embarked in the morning, and continued our journey through a continual drizzle of rain which was anything but pleasant.

October 8th — The weather cleared up and we saw cariboos in great numbers; but, as usual, they were too wary for us to get a shot at them. Passed the Rapids of St. Martin before night.

According to A.C. Anderson, the River of St. Martin, or Riviere St. Martin, was also called Gold River, and is probably today’s Goldstream River. The St. Martin name was also applied to the Columbia River rapids that lay near the mouth of the St. Martin’s River. The Gold or Goldstream River might actually be the place where the Big Bend Gold-rush occurred in the mid-1860s — hence the name of the large modern-day town in that region: Golden, B.C. (Well, THAT never occurred to me before…) Paul Kane’s story continues, as the Express makes its way upriver toward Boat Encampment:

October 9th — Travelled but a short distance today, having to cut our way through the numerous fallen trees which, projecting into the stream, obstructed the course close to the shore, which we were obliged to take owing to the violence of the current in mid-channel.

October 10th — In the forenoon we perceived tracks of human feet in the sand on the shore, which astonished us very much, as no Indians come near these parts; and on approaching Boat Encampment, which we did about 2 p.m. we perceived smoke rising, which made us hope that the brigade from the east with the express had arrived, but were much disappointed at finding that it was only my old friend Capot Blanc, the Sho-shawp chief from Jasper’s House, and two Indians who had come over to hunt. Here we made a suitable encampment and hauled up our boats high and dry on the sand. Capote Blanc had been very successful in his hunt, and had a large stock of dried moose meat and beaver’s tails, with which he supplied us abundantly, receiving a few small articles and ammunition in exchange.

Capote Blanc was well known at Jasper’s House, and apparently also visited Kamloops (at least I found a man named Capot Blanc at that post). His home was at Cranberry Lake, south of Tete Jaune Cache, B.C. (by the Cranberry River): his large territory included Jasper (east by the Miette River), Boat Encampment (south again by the Canoe River), and Kamloops (south-west by the North Thompson River). Paul Kane’s story continues, telling us of the Indigenous ceremonies held at Boat Encampment:

We now had nothing to do but to try and pass the time pleasantly as we could under the circumstances, until the arrival of the brigade from the east side of the mountains. The men spent the day principally in gambling, and performing charms which they supposed would hasten the arrival of the brigade, such as erecting crosses with one of the arms pointing to the direction from which it was expected. They also prepared what they call a “lob-stick” [or Maypole Tree]. For this purpose a high tree is chosen which has thick branches at the top, and all the lower limbs are carefully trimmed off. A smooth surface is then cut on one side of the tree on which the person in whose honour it has been trimmed is invited to cut his name: this being done, three rounds of blank charges are fired, and three cheers given, and the spot afterwards bears the name of his encampment. On this occasion I had the honor of carving my name upon the “lob-stick.”

We had almost constant rain, accompanied by immense snow-flakes which obscured our view of the mountains nearly the whole time of our remaining here. I, however, managed to pick out some few bright hours for sketching.

Paul Kane’s paintings are quite accessible online (through the Royal Ontario Museum), and you can tell which of those paintings was sketched at Boat Encampment. If you see mountains, men, horses, boats, tents, and octopus bags — that is Boat Encampment. There is no other place on the river where these four or five things would occur all at the same time and place. His journal continues:

… Boat Encampment derives its name from its being the head of the navigable water. Three rivers here unite, forming the commencement of the north branch of the Columbia, so that the enlargement of the river is very sudden.

These rivers are the Canoe, the Wood, and the Columbia River itself, which flows from the south to Boat Encampment, where it breaks through the range of mountains and makes a sharp U-turn, turning from its northward flow to the south, and, eventually, reaching Fort Colvile and beyond. Kane’s journal continues:

October 28th — About three o’clock in the afternoon a clerk in the company’s service arrived and announced that he had come in advance of the eastern brigade, which would arrive next day under the command of Mr. [Thomas] Lowe. This was indeed joyful news to us, as we were all heartily tired of our gloomy situation.

October 29th — Mr. Lowe and party arrived this morning with between fifty and sixty horses loaded with provisions and the furs destined for Russia. They had been nine days crossing from Jasper’s House. Mr. Lowe seemed doubtful about our being able to recross with the horses; but I cared little whether we had horses or not, so that I got away, for I was completely wearied with my long inaction. My provisions, too, were getting short, and the person in charge did not offer to replenish my stock, so that I had no choice but to cross as quickly as possible.

October 30th — This day Mr. Lowe left for Fort Vancouver with the boats which had brought me up, leaving me with four Indians who had accompanied him from the east side for the purpose of taking the horses back, and of guiding me over the mountains.

So, Paul Kane does not seem to be too happy with Thomas Lowe — how interesting. In fact (reading ahead) he is not happy about anything that is happening to him right now. But that is all for the next post, which, when written, will be published here: https://nancymargueriteanderson.com/whatever-I-call-it/

But I wonder what Thomas Lowe had to say of Paul Kane, on his own arrival at Boat Encampment? Well, on Thursday, October 28 it was snowing and sleeting the whole day, and Lowe says that “the road through the woods was in a horrible state.” And, on Friday 29th:

The weather in the fore part of the day was very boisterous, blowing hard with rain and sleet which rendered the road through the woods exceedingly bad. Arrived at the Boat Encampment in the afternoon, where we found Mr. [Paul] Kane, two sons of Dr. [Alexander] Kennedy’s, and 12 men. They brought up the two boats from [Fort] Colvile, which with the two we left here in the Spring, will make 4 boats to go down the river with. Mr. Kane and the two boys are to cross the Mountains with the horses, but I am afraid they will find much difficulty in getting across owing to the depth of snow. They have been waiting here for us for 20 days, but there is still an abundance of provisions left, as Mr. [John Lee] Lewes sent up an unusually large quantity from Fort Colvile.

So, the artist Paul Kane does write as if he is the only person there, and he is not. I suspect his temper tantrum did him no good at all — but we will see in the next post in this series.

To return to the beginning of this journey up the Columbia River: https://nancymargueriteanderson.com/paul-kane-columbia/

Also still on Mastodon, at @MargueriteHBC@mastodon.social