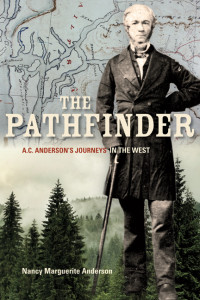 Fifteen years before the 1858 Fraser River gold rush, a Hudson’s Bay Company clerk threaded his way through mountain passes and down rapid-filled rivers in search of a route through the mountains that separated the HBC fort at Kamloops, from Fort Langley on the Pacific coast. Half a century earlier, Alexander Mackenzie and Simon Fraser had separately explored the Fraser and its tributaries, and both had failed to find a safe canoe route to the Pacific. In the mid-1840’s, Alexander Caulfield Anderson succeeded in finding four routes to the lower Fraser, all of which bypassed the canyons and rapids that had foiled the earlier North West Company explorers.

In the end, only one of Anderson’s routes served as the HBC’s brigade trail to Fort Hope for the next fifteen years. However, in the years that followed, all four of Anderson’s trails carried thousands of gold miners around the same rapid-filled canyons, into the upper Fraser River gold fields.

The Pathfinder is the story of the Hudson’s Bay Company Trader whose four cross-country expeditions helped to carve modern British Columbia from the wilderness that surrounded Fort Langley, Kamloops, and Fort St. James. Because Anderson was so interested in the early NWC explorers, whose trails he followed, his story touches on Mackenzie’s venture west to Rascal’s Village, and Fraser’s chaotic descent of the river later named for him. It continues through the turbulent years as the HBC was forced to abandon old brigade trails and find new. It covers Anderson’s years in the new Oregon Territory when his disappointment with the HBC forced him to retire. And it describes the 1858 gold rush and James Douglas’ creation of the colony of Vancouver’s Island, a political action that changed the HBC’s old domain beyond recognition. The story also tells of the arrival of the Royal Engineers, who built roads through canyons the HBC traders had been unable to negotiate in safety, that carried British-born settlers into the wilds the fur traders had occupied for the previous fifty years.

Welcome to Alexander Caulfield Anderson’s life story. The book has been out for four years, and has done well. If you are unable to purchase new copies through Amazon or your local bookstore, I have copies left. Please contact me. If you can do an Email Money Transfer of cost of book plus postage (approximately $30 in total), I will be happy to look after you.