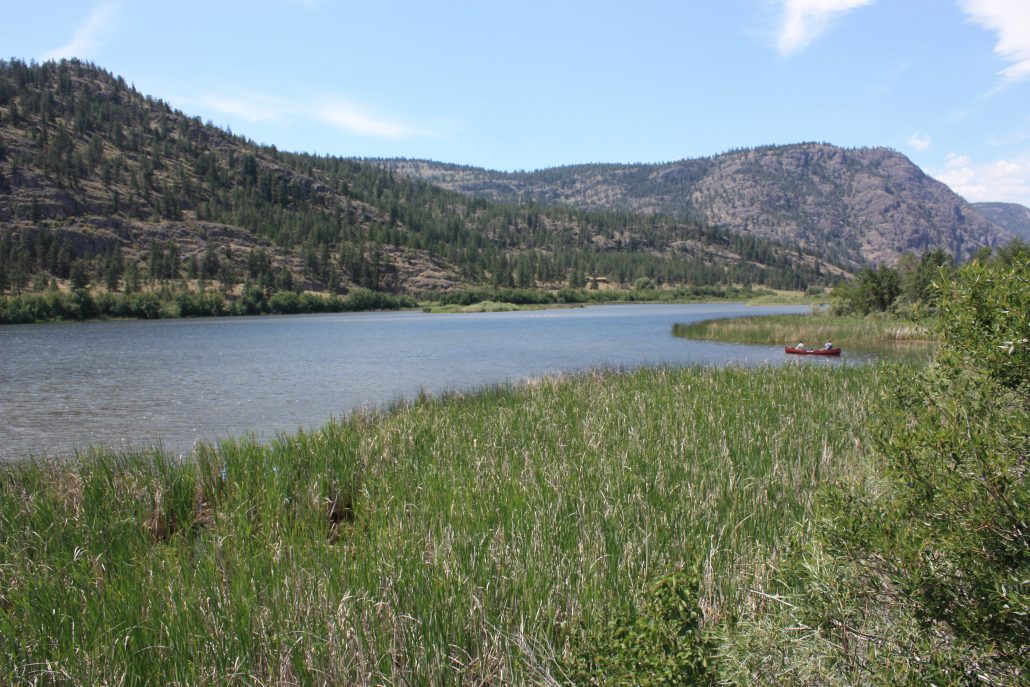 This is not the Red Deer River nor the Beaver, unfortunately. I have no photos of this part of the world, and have to substitute until I do. This is the Okanagan’s Lac Vaseux (Muddy Lake) with canoe.

John Work and Peter Skene Ogden have been stuck, without provisions, at the Moose Portage, on Lac d’Orignal or Moose Lake. At Lac d’Original, the Beaver River approached the North Saskatchewan River. They are south of modern-day Lac la Biche, and there is a nine mile long portage [so Work says] between the headwaters of the Beaver River and Lac la Biche.

This is what I have written in my “York Factory Express” manuscript, as Aemelius Simpson travels up the North Saskatchewan River in 1826:

The next landmark these men passed as they travelled north and west from Vermilion Creek was the mouth of Moose Creek, a river that would take them northeast to a lake of the same name if they had wanted to go there. “At 9.15 we passed Moose Creek,” Simpson wrote, “a small stream falling in on the left [right] or North Bank. I am told it communicates with a lake of the same name [Moose Lake], & then by making a few Portages to a chain of small Lakes we get to Beaver River, which communicates to the Athabascaw [Athabasca]. For many years this was one of two or more routes into the Athabasca district.

His information is a little inaccurate, as the Beaver River did not connect to the Athabasca except by portage through Lac la Biche and the Red Deer River. In these journals, “Orignal” is always Moose, and “Biche” is the Red Deer, or elk. Lac la Biche is named for the Red Deer, and Lac d’Orignal for the Moose. Its confusing, but its nice to find that what I learned in the York Factory Express journals holds true for John Work’s journal.

The road was very bad, also burnt woods, mostly very thicketty and some swamps, however we found the road at the little river about noon, and reached the Portage [to the Beaver River] about four o’clock when I found that the canoes were gone. Mr. Ogden left a letter for me, informing me that having remained two days longer than the time he had expected my return, and having scarcely any thing to eat for the people, he had been induced to move up the river about half a days march to an Indian encampment where he expected to get a small supply of provisions to enable him to proceed to Lake Sabish [Lac la Biche?] where he learned there were some freemen & Indians, from whom he could get a further a further supply. He directed me to follow him up the River with the horses & provisions as expeditious[ly] as possible, and expected that I would come up with him a the first Indian camp where he would be detained some time. The people and horses, he said, could reach Edmonton as soon from Lake Sabish as from Moose Portage, and that between the two latter places was only 3 days march for loaded horses. The Edmonton men were prevailed on reluctantly to proceed up the river & we continued our journey till night, the road was through thicketty woods and very bad.

Wednesday 10. Left four men to proceed with the horses and went ahead with one man in expectation of coming up with the canoes & stopping them till the horses came up. A little after sunrising I reached the above mentioned Indian camp, where I learned that the canoes were not very far ahead. I immediately sent off one of the Indians with a note to Mr. Ogden, apprising him how near we were, and requesting that he would wait for us. As the Indian had a good horse, he said he would soon come up with them. We followed on with the horses and about 2 o’clock met the Indian returning with a note from Mr. Ogden, who encamped on his arrival and was waiting for us. We accordingly drove on and reached the canoes in the evening, which I was very glad of as I was tired with the journey. What Provisions are now brought with what was procured from the Indians, Mr. Ogden thinks will be sufficient to serve us till we get to Five Islands, so that the horses will not be required for eating.

I am sure that the Fort Edmonton men, who were responsible for the horses, were pleased that they would not be sacrificed for food. Does it surprise you that these men ate horses? They did, and I believe they also dined on dogs, which they often carried with them in the boats of the York Factory Express.

Thursday 11. Sharp frost in the morning. Cloudy fine weather afterwards. Mr. Ogden and the people have been very short of provisions since he sent me off, except 60 lbs. of Pemican which he got from a man who was going with a supply to meet Mr. [William] Connolly [then at Lesser Slave Lake], his whole dependence was on 6 or 7 fathoms of net which they made with part of a skein of twine which he fortunately had. With this they generally killed from 6 to 8 fish a day, which with some berries constituted their whole subsistence till they met the Indians above mentioned, when they got a supply. Mr. Ogden had been in ill health since I went off…

Peter Skene Ogden’s illness is interesting. It sounds like a malaria but he did not yet have the disease, as far as we know. The “malaria,” if it was malaria, also seems to have disappeared after September 23rd, and I don’t think malaria would have just “gone away” like that. I have written about it here: http://nancymargueriteanderson.com/ogdens-illness/ and, without being an expert on this subject, I have speculated on the possible cause of his sickness. It is probable that there isn’t enough information to decide what caused it.

Let us continue their journey, to see how far they will get on their way. They are still on the Beaver River here:

The canoes started at sunrising and proceeded up the river, while the two men with the horses and the passengers went along shore. This little river from the Moose Portage is very shallow & narrow, the banks generally rising up to hills on each side forming a valley through which the river winds from side to side. The canoes are dragging along the bottom all the way. Some spots along the woods are of pine & poplar and of a large growth, but the greater part is of small bushes & brambles. Considerable tracks [tracts] of the large wood have been recently destroyed by fire — some places there are fine green hills near the river.

September 1823, Friday 3rd. Sharp frost in the morning. Cloudy fine weather afterwards… The two men with the horses were sent off to Edmonton, they are to follow a nearer road by which the Indians we saw below came from the plains… The canoes were out short after sunrising and made a pretty good days work, the water being a little better than usual. I walked along shore. The river and banks still keep the same appearance between the bottom of the hills on either side and the river it is sometimes swampy and covered with long grass. A band of Indians have pitched up along the river a short time ago, who have killed any chance animal that might have been in the way, as there is not the track of either buffalo or moose to be seen.

Saturday 13. Cloudy soft weather. The canoes set out before sunrising this morning and arrived at what is called the Portage at the upper end of the [Beaver] river late in the evening. The river was very shallow and the road very bad the afterpart of the day, so that they made but very little way, having to lighten the canoes & carry the goods many places, which has been frequently the case all the way up the river… Both the steersman have sore feet and are unable to work so that they have had to walk along shore all the way up the river.

Sunday 14. Rained a good deal in the night. Cloudy mild weather during the day… The canoe and goods were carried across a short Portage to a small Lake where every thing was embarked and crossed the Lake when we came to the Portage that divides this Lake from Red Deers Lake [Lac la Biche]. This portage is not less than 8 or 9 miles long, the whole of which the canoe has to be carried except a short piece towards the farther end where part of the cargo is embarked, a small piece on a small river or rather swamp. All the waters we have hitherto passed empty themselves into the Hudson’s Bay, and are here divided from the Red Deers Lake by a small height of Land on the very edge of the Lake. The waters of this Lake discharge themselves through the small Red Deer River into the great Red Deer River, which empties itself into the Athabasca Lake.

It is still a long way to the Athabasca River, however, and we will stop here for the present. When the next John Work journal is published, I will post it here: http://nancymargueriteanderson.com/two-canoes-twelve/

When the next journal in this series, which is Governor Simpson’s journal, is published, I will add it in here: http://nancymargueriteanderson.com/two-canoes-eleven/