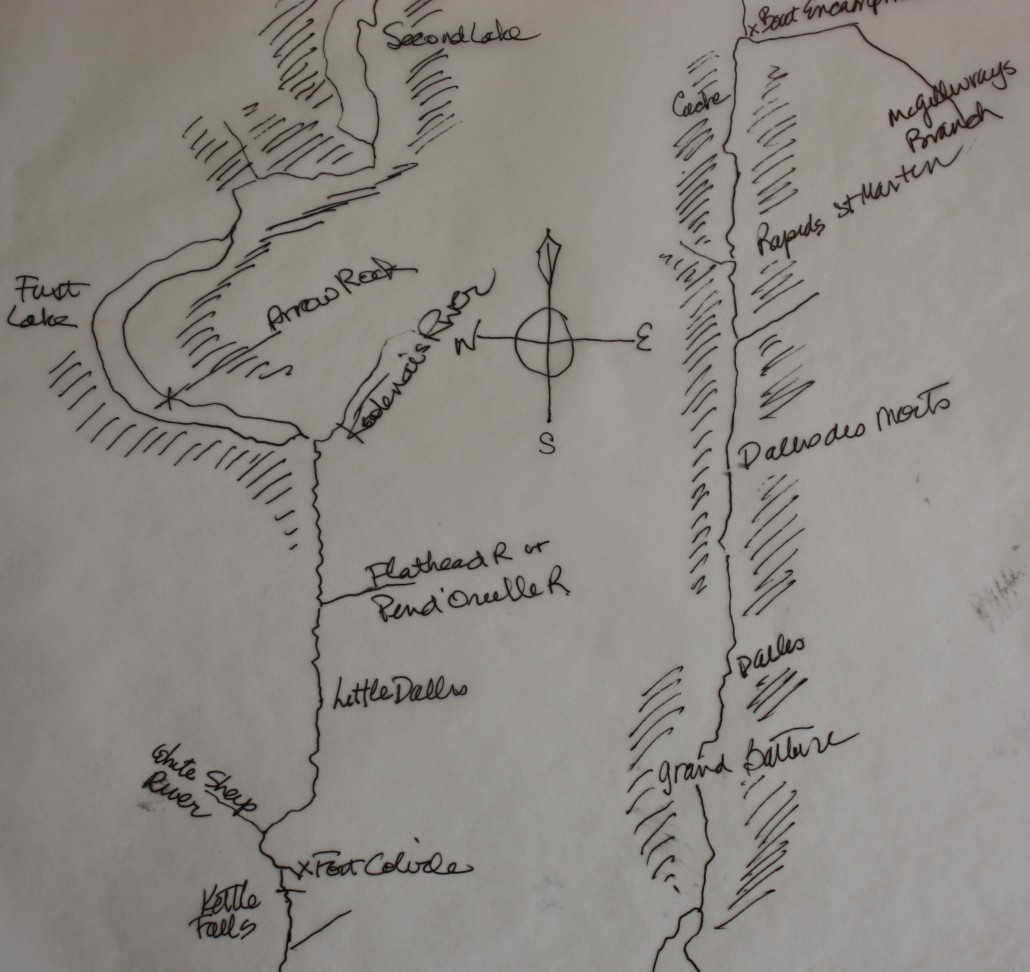 This is a facsimile of a map that a fur trader might have drawn as he was journeying up the Columbia River north of Fort Colvile, on his way to Boat Encampment

In his own York Factory Express journal, George Traill Allan, whose passage from Fort Nez Perces to Fort Colvile is covered in the last “chapter” of this series, wrote a good description of Fort Colvile as he saw it in 1841, fourteen years after its founding.

“Fort Colvile is a very neat and compact little establishment and nothing I have yet seen in the Indian Country can equal the bounty of its situation — placed on a rising ground in the midst of a very pretty plain encircled by an extensive & well cultivated farm — the fields & fences laid out with a neatness which does credit to the taste of their projector — here and there a band of Cattle to enliven the prospect and at a considerable distance surrounded on all sides by high mountains covered from the base to the summit with beautiful pines. Nor does the inside of the establishment yield in any respect to the exterior, for, when seated at table with Mr. and Mrs. [Archibald] McDonald & their family, one cannot help thinking himself once more at home enjoying a tete-a-tete in some domestic circle.”

But it is not Allan’s journal we are following in this section — it is Thomas Lowe’s. Lowe’s 1847 journal will take us from Fort Colvile, on the Columbia River south of the newly-established border between Canada and United States, to the Big Bend of the Columbia River at the place the fur traders called “Boat Encampment.” This historic place is now buried behind the dam that created Kinbasket Lake!

So who was Thomas Lowe? He was a smart young man, a Scot born in Perthshire who joined the fur trade and sailed to the Pacific coast in a ship that also carried Governor George Simpson. Lowe was assigned to Fort Taku on the Northwest Coast, a place that was constantly under attack by the local Natives. In 1843 the HBC gave up the battle and closed down the post, and Lowe and others came south to help build the new Fort Victoria. He was then transferred to Fort Vancouver where he worked until 1849, when he quit the fur trade. He saw history, and lived through some of the most interesting times in the Columbia River’s fur trade. This is his 1847 journal. He will return to Fort Vancouver in November, just before the entire district falls into war — but he didn’t know that yet!

A note on the illustration: This is a facsimile of a travelling map that might have been drawn by any HBC clerk as his boat was heading up the Columbia River. In fact, the details are taken from Alexander Caulfield Anderson’s own travelling map drawn in 1842, and stored in the BC Archives under Call number CM/13671A (front). (The “front” here should clue you in to the fact that there is a very interesting drawing on the reverse of this map. I have learned to ALWAYS turn a map or sheet of paper to see what is on the other side).

Thomas Lowe’s outgoing journal begins as he rows away from Fort Colvile on Thursday, April 22, 1847: “Beautiful weather. Started from Colvile with the two Boats about 5 o’clock in the afternoon, and reached Dease’s Encampment, 6 miles from the Fort. Mr. Burke & myself are the only passengers.” Dease’s Encampment is named for John Warren Dease.

“Friday 23rd April 1847. Fine weather. Made a good day’s work pulling against a light head wind. Pass the Little Dalles about 2 pm and encamped a mile below the Pen-d’Oreille River.” The Little Dalles’ ferocious whirlpools could swallow the mightiest of trees with ease; still most of the fur traders experienced very little difficulty in ascending them.

“Saturday 24th. Cloudy, threatening weather, but only a few drops of rain. Two or three peals of thunder in the afternoon. Wind still ahead, although light. Camped 1 miles above the Kootanie [Kootenay] River.” On this day’s travel Lowe’s party passed modern-day Trail and camped right about where the town of Castlegar stands.

“Sunday 25th. Fine day. Came to the first Lake before breakfast, and camped in the evening nearly at the upper end of it. Strong head wind all day.” Thomas Lowe’s “first Lake” is the Lower Arrow Lake today, and the upper Lake is the Upper Arrow. At this time the lakes were little more than a mile wide, but because of the damming on the Columbia River, the water stands at a much higher level today.

“Monday 26th. Started this morning at 2 o’clock, and had a strong favourable breeze for about 2 hours, after which it lulled, and was light and contrary the rest of the day. Fine pleasant weather. Camped late, about ten miles from the end of the upper Lake. Slept in the boats.

“Tuesday 27th. Fine weather. Breakfasted at the end of the upper Lake, and camped a little below the Grand Batture.” To the fur traders, a Batture was a sand or gravel bar in a riverbed or lake. James Douglas indicated in his journal that the Grand Batture was “a few points below the [Little] Dalles” and just north of his Chutes au Bovil.

“Wednesday 28th. Breakfasted at the foot of the 2nd Little Dalles, and had very hard work all day against rapids and strong currents.” The Little Dalles was 30 miles from the top end of Upper Arrow Lake, and just north of modern-day Revelstoke, British Columbia. It is rough, mountainous, country. Botanist David Douglas described these rapids in his journal: “…where the river takes a sudden bend, and to all appearances is lost in the mountains, a scene of the most terrific grandeur presents itself; the whole torrent is confined to a breadth of thirty-five yards, and tossed in rapids, whirlpools, and eddies; on both sides are mountains towering to the height of six or eight thousand feet from their base, rising with rugged perpendicular precipices from the very bed of the river, covered with dead timber of enormous growth, the roots of which, laid bare by the torrents, and now hurled by the violence of the wind from their original high places, come hurrying down the stream, bringing enormous fragments of earth attached to their roots, and spreading devastation all before them. The sun feebly tipped the mountain-tops as we passed this place, and, seen through the shadowy pines, imparted a melancholy air to the whole gloomy scene.”

“Thursday 29th. Showery. Got up to the Dalles de Mort, made a portage of the pieces, and hauled the boats up with the line. Camped at the head of the Dalles, made a fire on the rocks & slept in the boats.

“Friday 30th. Light showers. Camped about 2 miles above the River of St. Martin, on the snow.” According to A.C. Anderson’s “Sketch of the Upper Columbia, Fort Colvile to Jasper’s House” (CM/13662B, BCA), Riviere St. Martin is also called Gold River, and is probably today’s Goldstream River. It is possible this is where David Thompson’s man, Joseph St. Martin, drowned in 1825.

“Saturday 1st May, 1847. Fine weather. Got up to within 5 miles of the Boat Encampment.

“Sunday 2nd. Reached the Boat Encampment at 6 o’clock this morning, and got the boat which is to be left hauled up, and secured alongside another which we found there. Set the people to cook provisions to take them across the Mountains and got the loads arranged. Took 4 men from the boats to assist to carry until we meet the horses, and hired two Indians we found here to assist us also in carrying…” There was a lot of work to be done to prepare themselves for their journey over the Rocky Mountains via Athabasca Pass — the next stage of their journey. One boat was stashed in the woods, out of the sunlight that dried out the planks and opened the seams: the second would return to Fort Colvile in a week or so, with the incoming men and letters. Provisions were eaten up or cooked to be carried with them over the pass. Nothing that did not have to cross the mountains was carried any further than Boat Encampment. Even the liquor was stashed, left to await their return.

All the fur traders who arrived at Boat Encampment knew they stood at a historic landmark. In the last days of 1810, NWC explorer David Thompson was blockaded from his regular route across the mountains, via Blaeberry River, by the Piegan Blackfeet. Instead of bluffing his way past these hostile Natives, he made his way across the mountains via Athabasca Pass, a route not yet known to these NWC men. On January 10, 1811, his men reached the top of the mountains. A week later they stumbled onto the Columbia River, and set up camp on the banks of the Canoe. There was no good quality birchbark to be found here, so Thompson designed his “canoe of cedar boards,” on which design all later Columbia River boats were based. In mid-April the boat was finished, and Thompson continued his journey upriver, toward his trading houses on Pen-d’Oreille Lake and Spokane River.

Thompson’s route over Athabasca Pass proved so successful that the North West Company adopted it as their annual summer route in and out of the territory. Hundreds and perhaps thousands of men crossed over this steep trail in the nine years that followed. When in 1821 the NWC merged with the HBC, their trail worked so effectively that there seemed no reason to search for an alternate route. By the time Edward Ermatinger’s express climbed over the pass in 1827, it had been in use seventeen years. When twenty-two-year-old John Charles traversed it in 1849, the trail was seventeen years older than he was!

Here’s the link to the next post in this series, which will bring you all the way to Jasper’s House: http://nancymargueriteanderson.com/fourth-leg/

And if you have just stumbled on this post, and want to start at the beginning: http://nancymargueriteanderson.com/first-leg/

One thought on “Fort Colvile to Boat Encampment”