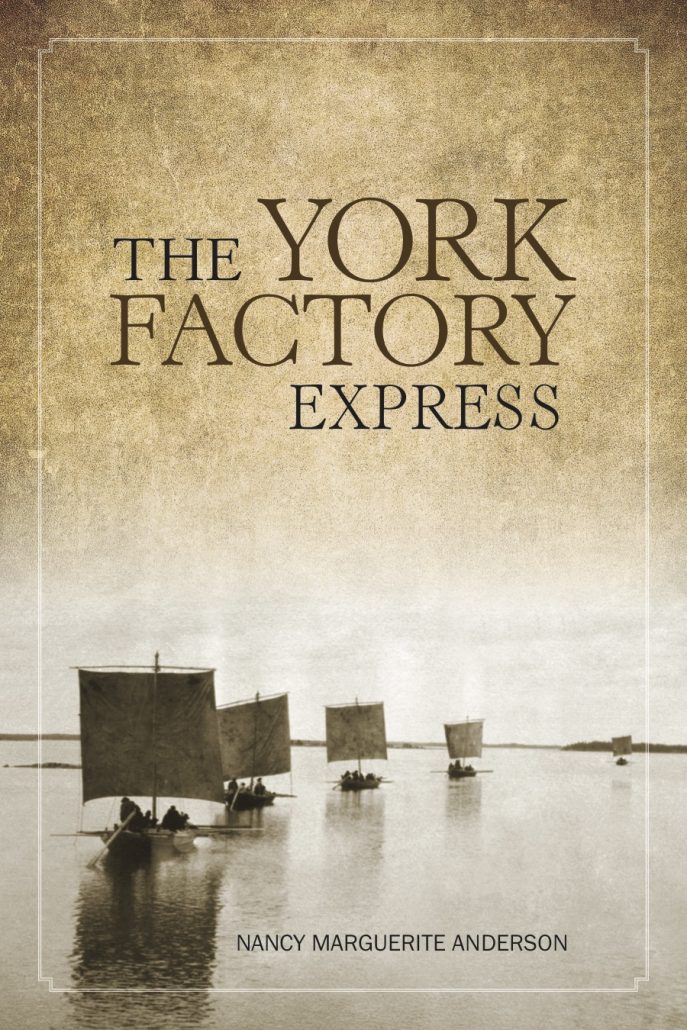 The cover of my book, The York Factory Express.

Welcome to “The York Factory Express,” where I tell the stories of the Express, and the Saskatchewan Brigades. These stories are told in the words of the gentlemen, the educated, usually Scottish traders and clerks who wrote the journals. However, the men who made the Express journey possible are the invisible, unnamed Canadiens and their Métis descendants who powered the boats across the continent every year between 1826 and 1854. The gentlemen were the passengers. The Canadiens, Orkneymen, Iroquois, and their Métis children and grandchildren, did all the heavy work and were almost entirely responsible for the success of the 5,400-mile journey. But their history was oral. If the gentlemen had not preserved the stories the voyageurs told them, we would not know this history today.

The York Factory Express journey to Hudson Bay and return was unique to the Hudson’s Bay Company’s fur trade west of the Rocky Mountains after 1825. The thirty or so men who travelled out in the York Factory Express began their journey at Fort Vancouver [Vancouver, WA], the HBC’s Columbia River headquarters. The express-men paddled their clinker-built boats up the rock- and rapids-filled Columbia to the base of the Rocky Mountains at Boat Encampment, a thousand miles east and north of Fort Vancouver. The men literally pushed their boats upriver, for their camp at Boat Encampment was more than 1,500 feet above sea level. They climbed over the Rocky Mountains on foot. At Jasper’s House, on the east side of the Rockies, they were 3,000 feet above sea level. Their river route eastward would return them to salt water once more, at York Factory on the shores of Hudson Bay. It was an amazing climb and an amazing descent, and they would do another climb and descent on their journey home.

More transformations occurred as they reached Edmonton House. At that prairie headquarters the fast-travelling, lightly laden Express party joined the Saskatchewan District’s slow-moving brigades that lumbered down the North Saskatchewan River, passing through rolling grasslands. The express-men had feasted on sea-biscuits, potatoes, and salmon west of the Rockies, now they gorged on pemmican, bison steaks and whitefish on the east side of the mountains. On the prairies they hunted “buffalo” (more accurately called bison), elk, and bear, and sometimes those creatures hunted them.

Changes happened everywhere over those years, but for the Canadien voyageurs and their Métis descendants, life remained much the same. The Canadiens brought their French language into the fur trade, and all who worked with them had to speak their language. They brought their beloved birch-bark canoes to the fur trade as well, but traditions changed and over the years they gave up their canoes for the more practical York boats of the Orkneymen. They sang their traditional songs from France and Quebec, and changed them. They celebrated variations of their Catholic-based ceremonies mixed with the traditions of the First Nation or Métis wives or mothers. In their world, they were all cousins, friends, and companions.

This was their life, and they were happy in it. They were young men, and flaunting their manliness was part of the voyageur culture, just as their ability to hunt for food was a part of their manliness. Like their ancestors before them, who had left France two centuries earlier to make their homes in the wilderness of Quebec, these men chose to live in a new wilderness. They loved their freedoms and believed they were free. Many times, Canadien and Métis men who arrived on the west side of the Rocky Mountains never returned home. Their descendants are still here. We are still here.

The York Factory Express tells the incredible stories of the seven-month-long journey, from the Pacific Slopes to Hudson Bay and return, that the HBC men made every year, in the years between 1826 and 1854.

The story that begins this long voyage to Hudson Bay can be found here: http://nancymargueriteanderson.com/first-leg/

You may order the book here: http://ronsdalepress.com/york-factory-express-the/