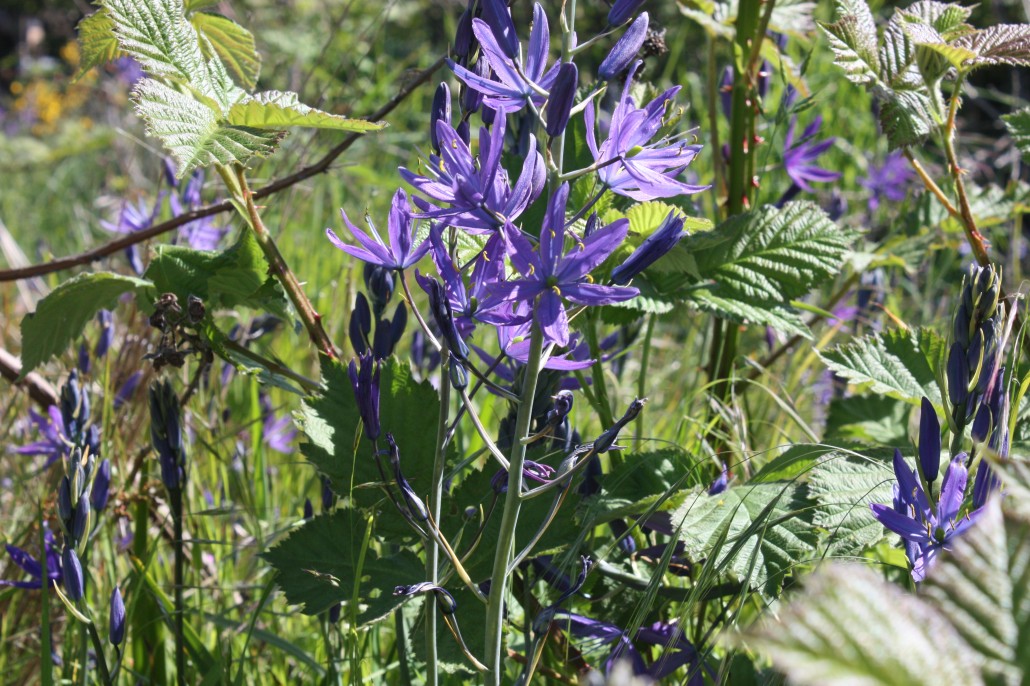 Have you wondered what the flower that graces my website is? It is the camas, a flower familiar to many of the furtraders. The North West Company explorer David Thompson knew the camas. From Jack Nisbet’s book, Sources of the River, I quote:

“On a fall day in 1808, Thompson had stopped at a bend in the Pend Oreille River to smoke with a small group of Kalispel Indians led by a good-natured old chief. In his diary it amounts to nothing more than a brief exchange: “The oldest man according to custom made a speech & a present of 2 cakes of Root Bread about 12 lb. of roots & 2 1/2 dried salmon…” The Kalispel chief has presented the surveyor with his first basket of roasted camas bulbs. They would become one of his trail staples, a food that made his belly grumble but kept it full. Thompson had saved some of these roots, and from his desk in 1847, when he was seventy-seven years old, he could take time to savor the moment, to focus his rheumy eye on a few small tubers.”

Nisbet continues with the lines that David Thompson wrote: “These Roots are about the size of a Nutmeg, they are … near the surface, and are turned up with a pointed Stick, they are farinaceous, of a pleasant taste, easily masticated, and nutritive, they are found in the small meadows of short grass, in a rich soil, and a short exposure to the Sun dries them sufficiently to keep for years. I have some beside me which were dug up in 1811 and are now thirty-six years old and are in good preservation… but they have lost their fine aromatic smell.”

“As he sniffed the camas roots, Thompson transported himself back to the blue-petaled meadows of the Pend Oreille, and the shriveled relics on his desk brought back the taste of the whole place…”

Those are David Thompson’s camas — Alexander Caulfield Anderson experienced this flower too, at Fort Colvile [Spokane area], and probably at Fort Nisqually [Tacoma] where they also grow. When he came to Fort Victoria in 1858, he found them here too. Anderson’s son, James, wrote of them in later years. In his book, Trees and Shrubs: Food, Medicinal and Poisonous Plants of British Columbia [Victoria: Banfield, 1925] James Robert Anderson described the camas that bloomed every May in the oak meadows that surrounded Fort Victoria:

“It is commonly called Camas or Le Camas and so the name had degenerated into Lickomas amongst those who are ignorant of the origin of the name. It is a bulbous plant, bearing a spike of beautiful blue flowers, from 6 to 12 inches in height, belonging to the Lily family. The bulb, which is about the size of a small Hyacinth, is a common article of food among the Indian tribes of North America.

“I am not aware of the limits of the territory in which it grows, but certainly in British Columbia, with which I am at present dealing, it is common everywhere where the land is sufficiently clear of trees and the soil rich enough, a rich black loam in open country being its natural habitat. The women go out when the plant is in bloom and with long, sharp, slightly curved and flattened , tough sticks dig up the bulbs, which are from 4 to 5 inches in the ground. These are conveyed to a kiln, 10 feet or less in diameter, and there cooked, after which the bulbs are divided among the contributors, who place them in baskets and store them away for future use.

“In a raw state, the Camas is perfectly white, very glutinous, sweet, with an aromatic and pleasant flavour. The kilns of which I speak are hollows in the ground from 2 to 3 feet in depth, the bottoms of which are filled with large stones, on which fires are built until the stone becomes red hot. Grass is then placed on the stones, on the grass the Camas is heaped, and in turn covered over with grass and mats, and earth heaped over all. The Camas is allowed to remain in the kiln for several days or until it is quite cold, when, as I said before, the bulbs are divided up. This, before the use or iron utensils became known, was a very common mode of cooking. Besides Camas, other roots were cooked in the same way.”

“Camas bulbs were a staple article of diet for many indigenous groups of the northwestern United States and were also widely used in British Columbia in areas where they were obtainable. They were especially important to the Coast Salish of southern Vancouver Island, but were eaten to a lesser extent by the mainland Halq’emeylem, Squamish, Sechelt, Comox, Nuu-chah-nulth and Kwakwaka’wakw…

“Methods of collection and preparation of the bulbs vary according to tradition, but most groups dug up the bulbs during or after flowering, between May and August, and steamed them in pits… Among the Vancouver Island Coast Salish, aboriginal harvesting and crop maintenance practices for camas can be termed semi-agricultural. Large areas around Victoria, such as the grasslands of Beacon Hill Park, and the small islands off the Saanich Peninsula, were frequented each year by the Saanich and Songhees peoples. They divided the camas beds into individually owned plots, passed from generation to generation. Each season, the families cleared their plots of stones, weeds and brush, often by controlled burning. Harvesting took several days, with entire families participating. The harvesters systemically lifted out the soil in small sections, removed the larger bulbs and replaced the sod.

“Even in this century, families would collect four to five potato-sacks full at a  time; most of these would be used for a communal feast upon returning to the villages.”

There is a warning that all fur traders (& botanists) give when they talk about the camas — there exists a similar plant called the Death Camas. James Anderson describes this flower in the poisonous flower section of his above mentioned book:

Death Camas: “This is the variety which grows about Victoria in company with the real Camas; it also occurs quite commonly in the open parts of the Province… Both have the same grass-like leaves as the ordinary edible Camas, but are to be distinguished by the colour of the flowers, the former being of a yellowish-white, whilst those of the edible Camas are blue. Nevertheless, care has to be exercised by the First Nations people in digging up the bulbs of the edible Camas on account of the resemblance of the bulbs. This is a well-known poisonous plant both to human beings and animals, the poison being contained both in the leaves and bulbs… Experiments in the United States show the poison to be an alkaloid related to the violent poison of hellebore. One-fiftieth of a grain killed a frog in two minutes. The dose of strychnine fatal to a frog is twice that amount. From this some idea of the intensely poisonous nature of the bulbs may be gathered.”

Every year, in May, I post pictures of the Camas on various Facebook pages where the fur trade descendants gather, and we all tell our stories of Le Camas. I will do the same next spring. It is our tradition.