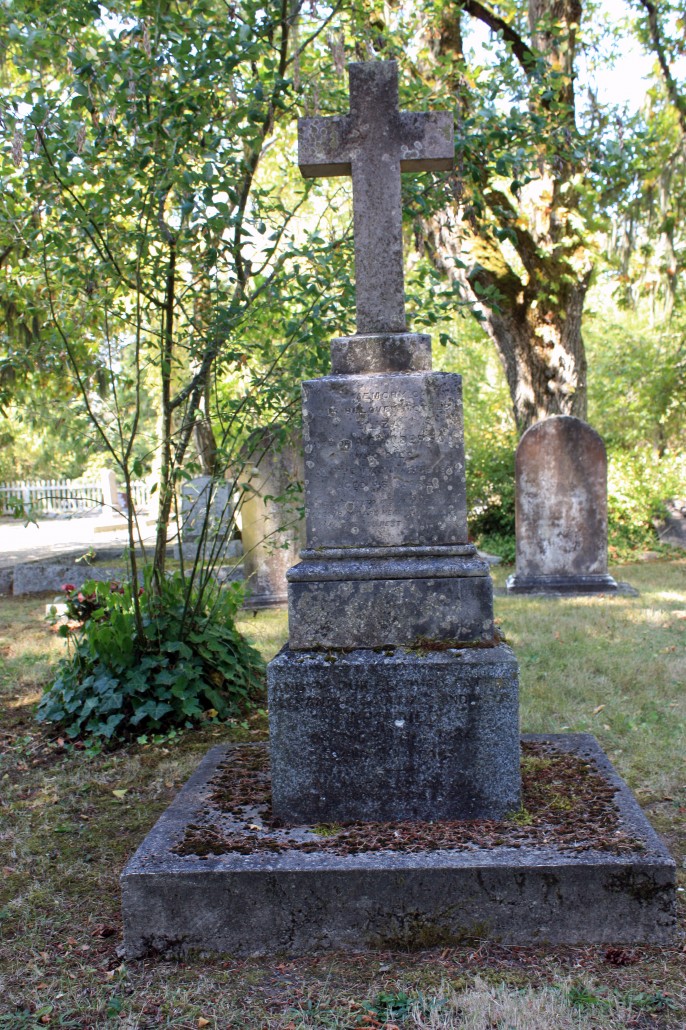 Alexander Caulfield Anderson’s grave (and that of his wife) stands almost directly in front of the entrance of St. Stephens Church, Mount Newton Crossroad, Central Saanich

Sometimes when I begin to write a speech, I find it runs away from me and takes on a life of its own. This was one of those talks that finished quite differently than it had begun.

I was invited to speak at an event at St. Stephens Church in Central Saanich, where Alexander Caulfield Anderson is buried. The parishioners were saying farewell and thank you to the resident story-teller, who was retiring from his job.

There were three speakers, and I had ten minutes to make my point. My talk quickly took on a theme of its own and proved to be a lot of fun!

The image above is of Alexander Caulfield Anderson’s grave, with my mother, his grand-daughter, standing beside it. She was 90 years old when  this picture was taken, and she was his last surviving grandchild.

“My name is Nancy Anderson,” I began, “and I am the great grand-daughter of the fur trader, Alexander Caulfield Anderson, whose worn gravestone stands just outside the front door of St. Stephens Church.

“So who was Alexander Anderson, you ask, and why is he so important?

“He was the fur trader who, in 1846 and 1847, explored four routes across the range of mountains that separated the fort at Kamloops, from Fort Langley on the lower Fraser River. Those of you who have driven through British Columbia know that means he must have traversed the Coquihalla long before any roads existed there, or that he walked around the range of mountains that loomed above Hell’s Gates.

“He did both — on foot, and in later years on horseback, with the fur traders’ brigades. His story is told in my book, The Pathfinder — and from this book you will also come to understand how significant a figure he was in North and Central Saanich’s early history.

“Stories are important, and they are how both family histories, and local histories, are saved. You would probably not consider A. C. Anderson’s wife, Betsy Birnie, a significant person — but she was the probable mixed-blood grand-daughter of the North West Company voyageur, Joseph Beaulieu, who crossed the Rocky Mountains with explorer David Thompson in 1807. Just to warn you, after I say this, I have to add the line: “Not that we can prove it!”

“And this is why stories are important, and why stories must be told and retold and written down. It is highly likely that our story is true, but it wasn’t written down and so we can’t prove it.

“We do, however, know that Anderson’s wife, Betsy, was born into the fur trade at Spokane House in 1822, shortly after her mother’s marriage to fur trader James Birnie. Betsy grew up in the fur trade, and lived a fur trade life until she was forty years old. She would not have fitted well into the lives of the English settlers who broke land in the valley where this church stands. Still, when she died in March 1872, her funeral at St. Stephens Churchyard was attended by the many friends of the Anderson family.

“And so the first generation of Andersons who came to British Columbia (A.C. Anderson & Betsy) are buried in this cemetery. The next generation is represented here as well. The grave of Anderson’s son, Walter Birnie Anderson, and his wife and daughter, stands only twenty feet away from A. C. Anderson’s grave.

“Walter came to Saanich when he was twelve years old, and grew up on Anderson’s farm. He became one of the early British Columbia policemen and served the force in Comox and Cumberland for many years. He returned to Victoria on his retirement, and when he died, he chose to be buried here. This was his home.

“The next two generations are also represented here, in two separate plots. The Harveys who lived on Knapp Island are descendants of A. C. Anderson’s daughter, Agnes, who was also born into the fur trade at Fort Colvile, near Spokane.

“Agnes was more fortunate than her brothers and sisters. She adapted well to civilization at early Fort Victoria and married well, to Captain James Gaudin, a rather famous man himself. Her children married into the Dunsmuirs of Nanaimo — hence her family brings representatives of many prominent British Columbian families into St. Stephens Churchyard.

“The final Anderson family member buried here is my aunt, Claire. No one but my sister and I could have identified the baby buried in Walter Anderson’s family plot, and we only managed to do so because of our ancient mother’s many stories about her older sister, who she never knew! Claire died as an infant, before my mother was even born.

“Both Claire and my mother, Peggy, were children of Alexander Caulfield Anderson’s youngest boy, born in Saanich in 1864. His name was Arthur, and he was less than twenty years old when his father died. He remained in Saanich a few years before going to the Kootenays to bury his brother (Constable Henry Anderson of the B.C. Police). He remained there for a number of years, to log and mine. Eventually he returned home with some money, and purchased a strip of land west and north of this church — if any of you live on Salmon Road or the tangle of roads in that immediate vicinity, you are living on Arthur Beattie Anderson’s old property.”

Several people put up their hands and stated that they were living on that exact strip of land. Amazing!

“I should say that the only way my sister and I knew about that strip of land is that my mother told her stories. Though the family moved when she was only three years old, she told us enough about the place that we recognized it was our grandfather’s property, when we found it on a map in a book about the early settlers of Central Saanich.

“Arthur sold off pieces of land as his money ran out; and he also rowed across Saanich Inlet to work on the Malahat Highway, which was then under construction. When he ran out of money in 1817 or so, he sold his last piece of property and moved to Valdez Island to raise sheep. Arthur eventually died in Duncan, where he is buried in an unmarked grave.

“But before Arthur left Saanich, he sold one piece of land to his father-in-law, Reverend Frederick Granville Christmas — the man church members fondly remember as “Father Christmas.” This gives our family one more strong link to St. Stephens Church.

“As I have said, stories are important. Tonight we are remembering the work that your resident story-teller has done in preserving your stories, and in bringing them to you. He might not have known all of the Anderson family stories, but he would certainly have understood who Alexander Caulfield Anderson was! In the fall of 1861, Anderson was one of three  men who cleared the land so that the church could be constructed the following spring. For this reason, A. C. Anderson will remain a part of St. Stephens Church’s long and wonderful history. Moreover, to members of the Anderson family, St. Stephens churchyard continues to hold an important place in our collective memories; it is a special place.”

If you wish to get a copy of the book, “The Pathfinder,” it seems to be out of print. I have a few copies left, and so you can order a copy from me, via the contact sheet. Thank you.

3 thoughts on “Tell Your Story”