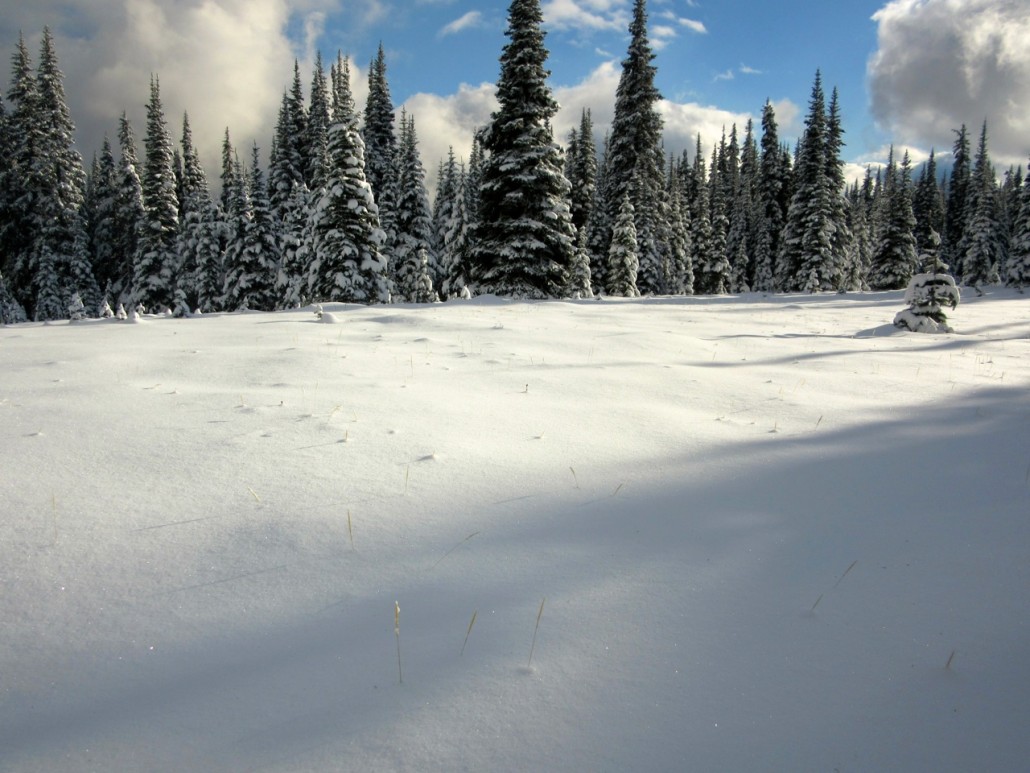 A landscape like this required the use of snow-shoes, and when the  HBC men (and Natives) crossed B.C.’s Tulameen plateau in winter-time, they would have used them. This is the Garden of Eden on the HBC brigade trail over the Coquihalla, photo taken by Kelley Cook in November 2015.

The HBC’s “Rupertsland” was a land of winter, and for the HBC men snow-shoes were essential. At some point in their lives, every man who worked for the HBC (and for the companies that came before them) walked in snow-shoes over deep snow for long periods of time. It was an experience enjoyed by all, after a fashion — at least everyone seemed to have a sense of humour about their many tumbles and falls. Here are a few stories from various sources:

First, from The Life of Father De Smet, S.J.: Apostle of the Rocky Mountains, by Rev. Fr. E. Laveille, S.J., from one of DeSmet’s letters as he described his crossing of Athabasca Pass in (I believe) winter 1845-1846. Father De Smet was travelling west from Jasper’s House:

We had sixty miles to make on show-shoes before reaching the boat encampment on the Columbia, and we determined to make the trip in two and a half days. The commanders at Rocky Mountain House [Jasper’s House] and at Fort Edmonton endeavored to dissuade me from undertaking this journey, thinking me too heavy for the exertion it required. But a strict fast for thirty days reduced my flesh, and, finding myself considerably lighter, I bravely set out to journey through snow from sixteen to twenty feet deep. We went single file across a plain covered with the debris of an avalanche; now over lakes or torrents hidden under the snow; and now through a cypress forest buried in snow to its top branches. I do not know how many times I tumbled, for every minute I was having trouble with my snow-shoes, or was caught by the branch of a tree. When one falls the arms are instinctively stretched out to save one’s self. In deep snow the danger is not great; the arms sink in up to the shoulder, and one lies struggling and laughing. My guides were most obliging, and after each tumble hastened to my assistance and got me on my feet again.

After tramping thirty miles the first day, we made our camp. We cut pine branches, which we laid on the snow for our beds…. The next day we began the steep descent of what is known as the Great Western Slope [Grande Cote]. It took five hours. The whole side of the mountain is covered with a dense forest of huge pines, larches, and cedars. Woe to the man with a heavy body or who makes a false step! I speak from experience — for many times I gathered myself together twenty or thirty feet from where I fell, happy indeed if I did not strike my head against the trunk of some great tree.

In 1842, clerk Augustus Peers arrived at York Factory, and experienced both deep snow, and snow-shoeing. He was writing for London publication, he hoped, but he still appears to have enjoyed his experience of walking on these clumsy implements. Here he describes the snow-shoes he found at York Factory:

These useful articles are made of various sizes to suit the various depths of snow. Birch, from its hardness and elasticity is the best wood they can be made of. Two thin frames are first made of about three quarters of an inch wide and one and one quarter deep decreasing in thickness towards one end to allow its being turned up in front skate fashion. The frames are then fastened together and being opened out here are fixed across and the space is filled up by a netting made of thongs of deer skins, known in the country as “babiche,” but as the middle space requires to be strong to resist the constant pressure of the foot a larger and stronger lacing is used, care being taken not to lace them too closely, otherwise the snow cannot find a passage through.

Now that is interesting information about the manufacture of these shoes. These were essential articles in most places in which the HBC had posts, as one could not go far from the forts if they did not wear them. However, they were treacherous — at least to novices. Peers describes his experience of walking on snow-shoes, below, and it is remarkably similar to that of Father De Smet:

Suppose yourself, gentle reader, taking your first walk alone with a pair of these articles between five and six feet long; you are no doubt quite elated at your success and in your ardor you step out still faster, anxious to do still better things. But we should always leave well alone. In your eagerness you trip, stagger, now on this side, now on that, recoil, and finally away you go with extended arms and according to the approved method of divers you pitch head foremost into the deep snow, heels en l’air, throwing your gun some feet before you. “Alas! Alas! I am down!” Yes, and you will find it no easy matter to extricate yourself.

You look up with head and shoulders covered with snow and to your dismay you find there is no tree within reach to lend you its friendly aid. Well, you don’t intend lying there to freeze and accordingly you thrust your arm down, down, down to the bottom and though you at last feel the ground, still it is so far off that your arm is already stretched to its utmost and cannot therefore assist you. Now unless you are blessed with a very even temper, you begin to kick and sputter, uttering a smothered malediction against those “confounded” snowshoes. You next try to draw one leg under you but of this the length of the snowshoes will not admit, so after another fit at wriggling and writhing you manage to untie one of the strings of the shoe and by taking the latter in your hand you push it to the bottom and to your delight you find yourself once more on your legs. After five minutes spent in brushing off the snow from your clothes and emptying your mittens, you shoulder your gun once more and continue on your tramp, leaving behind you an impression in the snow to commemorate your downfall and large enough to pass for the lair of a buffalo.

There was, of course, another result of walking on snow shoes for long periods of time, and that was the dreaded “le mal de racquet,” according to Peers. “The tendons along the instep and shin are the seat of this malady…

… which is caused by the constant strain on those parts by lifting a quantity of snow on the shoe at every step in marching through deep snow. A person who is afflicted with it experiences torture at every step and the only way to relieve it while on the march is by attaching a string to the foot, and by holding the other end in the hand, to lift the foot at every step. Some tie a bridle from the knee to the instep to render the leg tight.

The men on the York Factory Express used snow shoes as they climbed over Athabasca Pass in the spring. However, they generally wore smaller shoes, called Pas d’ours (bear paws) that they traded from the Natives on their way upriver. In the journals no one mentioned any difficulty in crossing the mountains on the snow. But in later years, George Traill Allan wrote of his experience, when he and Dr. William Fraser Tolmie had recourse to snow-shoes:

The Doctor & I were light, but the men were heavily loaded, and many of them having never seen a snow-shoe, many and great were the falls they had. The snow shoe has a very admirable and peculiar quality, when one falls down it is no easy matter to get up again, and although I felt for the poor men yet I could not altogether command my risibility, though it was however sometimes my misfortune to share the same fate, & Dr. Tolmie keeping me in countenance, we did not fail upon such occasions to laugh heartily at each other.

Dr. Tolmie was a man known to have had absolutely no sense of humour, and yet it seemed as though he laughed at the snow-shoe tumbles that he and his companions experienced as they walked across Athabasca Pass in 1841.