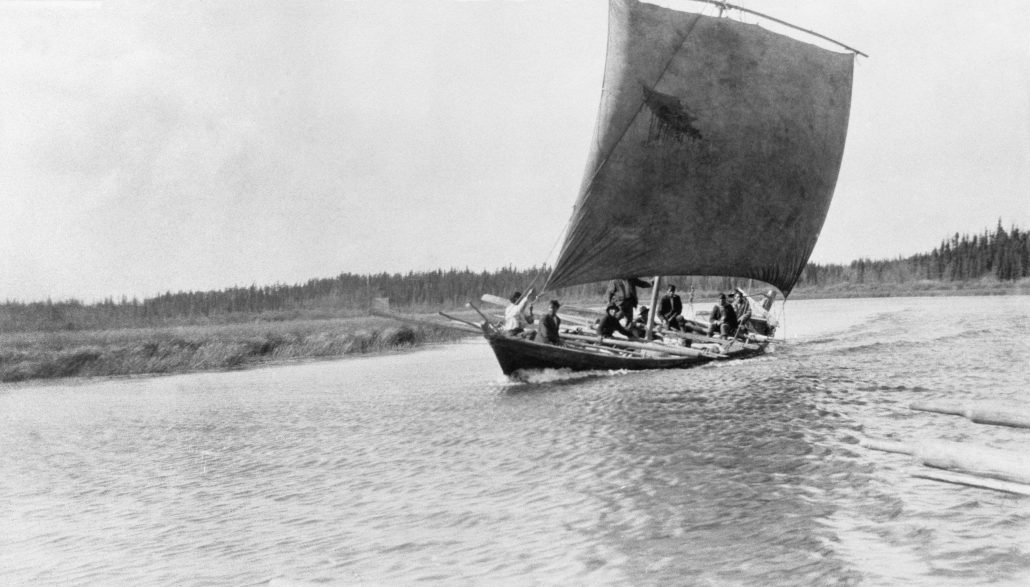 The men of the incoming York Factory Express have, by this time, been away from their home post of Fort Vancouver for some five months now, and all are beginning to tire of this never-ending journey up the Saskatchewan and North Saskatchewan Rivers. Even the journals of the various clerks show their exhaustion, in their lack of detail — or at least some of them do. I am, of course, not going to put the best of these journals here, but will reserve them for the upcoming book.

In the 1840’s and later, the gentlemen who were in charge of the incoming express left the boats at Fort Pitt, and rode overland to Edmonton House. In 1847, Thomas Lowe was guided by a Fort Pitt man around the northernmost curve of the river, passing through Frog Creek, Dog Rump Creek, Egg Lake, Vermilion Creek or modern-day Redwater River, and Edmonton House. In 1848 he took a different route, crossing the North Saskatchewan and riding past Vermilion Creek [still Vermilion Creek], a “long Chain of Lakes,” “Bute noir,” and “Eagle’s Nest Creek,” to Edmonton. (If any Albertan can identify these places, I would love to know their modern names.) In 1849, John Charles went upriver in the boats.

In 1835, James Douglas did it differently. He set off in a lightly-loaded boat ahead of the remainder of the Saskatchewan brigade boats, so as to arrive at Edmonton House before them. Here is a piece of James Douglas’s 1835 journal. It begins on Thursday, September 10:

Left Fort Pitt this morning at 9 o’clock with only one boat pretty strongly manned and with less loading than the others, in order to proceed on ahead of the Brigade to Edmonton from whence it is necessary to dispatch a few men to Fort Assiniboine, to prepare the canoes and make other arrangements previous to the arrival of the main party. Rained heavily last night, but dry during the day. Encamped one mile below Vermilion River.

Yes, there are two Vermilion Rivers in these journals — one north of Fort Pitt, and the other north of Edmonton. This is the southernmost one, which still bears that name.

Fri 11. Early this morning continued our journey; observing a luminous circle or halo around the moon, and sky wearing a rather threatening aspect, we concluded that a change of weather was not distant, and truly enough for about 7 this morning after ascending Frog Rapid the rain commenced falling rather heavily and continued throughout the day. Passed Lovers Rapid at 2pm and encamped 2 miles below the old fort of Dog Rump Creek…

What story gave Lovers Rapid its name, I wonder?

Saturday September 12. It rained slightly during the night but the sky was this morning clear in many places giving promise of a finer and more pleasant day than yesterday. Early in the morning passed the old fort [Dog Rump Creek]. The banks of the river are on both sides covered with wood but we still have at times a distant view of the lofty smooth hills peering out from beyond the intervening thickets. At half past 2 reached Fort de L’isle where the deceased King shot by Lamotte lies interred. Encamped on second reach below the Rapid of Bas fond du Lac des Aufs. While at this place a gentle easterly wind which had been gradually increasing in strength since morning induced the men to elevate the mast, and after concluding our meal the sail was spread to the breeze which carried us forward so rapidly as to render the exertions of the crew unnecessary, a respite from labour which is very acceptable to the poor fellows who are dreadfully fatigued by the long continuance of their toils. Encamped four miles the Crooked Rapid. Heard the calls, consisting of a loud whistle, of a great number of Red deer [elk] on the hills bordering the river. The buck red deer is at this season in full flesh and his branching antlers are now grown to their full size, and as he stands looking proudly from the lofty smooth hills amongst which at this season he delights to ramble [he] appears the most superb animal of the deer kind.

Sunday 14. The easterly wind still continued and we are not dilatory in availing ourselves of its assistance. Passed the White Mud River [Victoria Settlement, AB] at 12 o’clock, and at 4 o’clock the Rapid called Lac de Vivres, and encamped at half past 7.

Monday 15. Quited our encampment at 4 this morning, at 9 passed the river des quarter Peteaux, at 10 Carp [Namepi] River and encamped one mile above the Three Islands where the Vermilion [Redwater] River falls into the Saskatchewan. Rain during the early part of the day, and our progress was somewhat retarded by a powerful westerly wind which blew furiously until the evening.

At this stage they have gone over the great northern bend of the North Saskatchewan River, and are heading south, again, toward Edmonton House.

Tuesday 16. At half past 3 the men were on the alert and before the day we were on the route. At 10 reached Sturgeon River; an hour & half more brought us to old Fort Augustus [Fort Saskatchewan, AB]

Wednesday 17. Arrived at Edmonton about half past 2 pm.

There was a lot of work to be done at Edmonton House. All the boats were unloaded, and the Saskatchewan District packs were stored in their own warehouses. The Lesser Slave Lake men, who would travel north over the Athabasca Portage with the Columbia district men, would sort their packs and ensure they were not damaged. Jasper’s House packs and supplies were also transported north with the Columbia men, who at this time carried little over their mountain portage.

However, this was 1835, and we know that the incoming express of that year carried packs of leather upriver to Jasper’s House, to be delivered to a clerk that would come up the Fraser from Fort St. James. That clerk was my great-grandfather Alexander Caulfield Anderson, and his 1835 adventures in carrying that leather through Yellowhead Pass — New Caledonia’s “Leather Pass” — are told in my first book, The Pathfinder.

If you want to know more about the story of Lamotte and King, mentioned above, see here: http://nancymargueriteanderson.com/james-king/ Its a lovely little Death and Murder story!

I find it fascinating that every one of the journals I read connects with another journal, and another piece of history. Nothing happens in isolation, and our West of the Rockies history is closely connected to, and effected by, the history of Alberta and the other Prairie Provinces.

To go back to the beginning of this series, click here: http://nancymargueriteanderson.com/first-leg/

The next post of the series (the 17th leg) is here: http://nancymargueriteanderson.com/athabasca-portage/