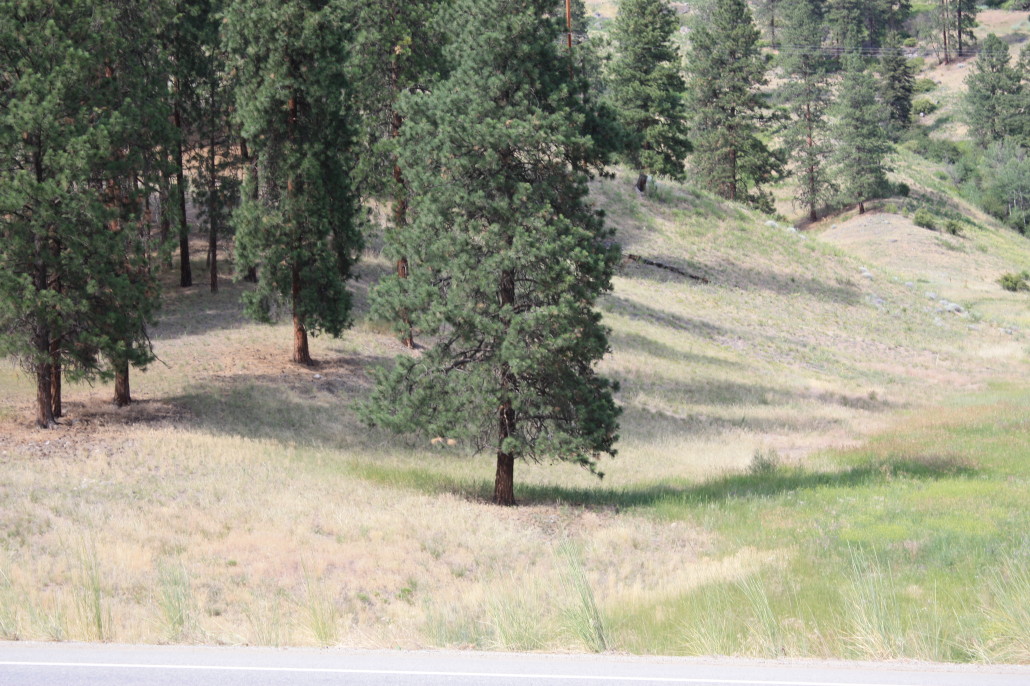 Yes, I admit this is the Kettle River valley. When I find my pics of the Similkameen River valley I will add them in here. Sorry! Yes, new computers can be really annoying!

In 1849, Royal Engineer Lieutenant Henry Spencer Palmer rode over the brigade trail to Fort Colvile at the side of Angus McDonald, who was then in charge of that Columbia River post. I will be working on this part of my manuscript tomorrow, and so it is not a bad idea to get a jump start and figure out where the brigades actually are as they travel through this valley. I have Palmer’s map as well as some good backroad maps, so that might make this process a little easier. So, let’s start at the junction of the two rivers — the Tulameen, and the Similkameen. The date is September 22.

The junction of [the] two rivers is named the “Vermillion Forks,” from the existence in its neighbourhood of a red clay or ochre, from which the Indians manufacture the vermillion face paint; but though I endeavoured to find its whereabouts, being anxious to procure a specimen, my search was unsuccessful.

We camped this evening on the left bank of the Similkameen one mile below the forks, and shortly after our arrival were visited by some of the natives of the District.

The Similkameen River and the Tulameen converge at modern-day Princeton, B.C. The place that Spencer labeled Camp 8, however, appears to be on the banks of a river that flowed in from the north, a short distance east of the junction of the Similkameen and Tulameen — Shishler Creek perhaps? However, once I can read (with difficulty) the writing on the map, it tells us this creek flows down a “Broad Open Valley, leading to Nicholas Lake.” In truth that sounds more like he is describing the Zouchameen Trail up through Allison Lake — and perhaps he is. In their article “Fur Trade Trails, Princeton to Nicola Lake,” Ken Favrholdt and Bob Harris write that “The trail forked at the mouth of a creek one mile east of Vermilion forks (Princeton) where John F. Allison established his ranch.. The trail using this valley was given all three preceding names, as well as “Zouchameen,” the Indian name of Red Earth Forks (Princeton).” Rampart Creek seems to flow south following the modern Highway 5A, which does travel north through the old Zouchameen Road, so I think it is safe to say that the Fort Colvile brigades camped on the banks of Rampart Creek, not Shishler. Palmer’s journal continues:

As our horses wanted a day’s rest after their weary mountain journey, I decided to remain two nights at Camp 6, and the weather being fine and clear, I was again enabled to take astronomical observations. From these I obtained a mean latitude of 49 degrees, 27′ 42″ N., showing a considerable error in all existing maps; but I feel confident of the accuracy of the observations, and that any future survey will verify the result obtained.

September 24 and 25. The weather continued fine and clear, and we resumed our journey at an early hour. Passing over one of the mountain spurs, 300 feet high, at the narrow entrance to the valley [Darcy Mountain], the trail descends into a fine prairie, scantily timbered and containing excellent bunch grass.

As the valley for the first 37 miles (comprising two days’ travel) exhibits the same general features, one description will suffice to afford the necessary information. Like most of the mountain streams, the Similkameen is extremely torturous, and the prairies, which alternate pretty regularly from side to side, vary in width from one-eighth to three-quarters of a mile, gradually increasing till towards Camp 8 they attain a breadth in places of a mile.

The grass is generally of good quality, the prickly pear or ground cactus, the sore enemy to the unoccasioned traveler, being the surest indication of approach to an inferior description. Timber is for the most part scarce on the prairies, but coppices appear at the sharp bends of the river tolerably well wooded, and abounding in underbrush of willow and wild cheery, while near the base of the mountains it exists in quantities easily procurable, and more than sufficient for the requirements of any settlers who might at some future time populate the district. The soil is somewhat sandy and light, but free from stones, and generally pronounced excellent for grazing and farming; and though the drought in summer is great, and irrigation necessary, many large portions are always well watered by streams from the mountains, whose fall is so rapid as greatly to facilitate such further irrigation as might be required. In corroboration ….

The river throughout its entire course in confined to a natural bed, the banks being steep enough to prevent inundations during the freshets (a favourable omen for agriculture), and its margin is generally fringed with a considerable growth of wood of different kinds. The mountains skirting either side of the valley are steep and frequently rocky, increasing in altitude towards Camp 8, where they attain a height of at least 2,000 feet, and their slopes are plentifully clothed with a forest of various descriptions of timber. The trail throughout is generally good, the mountain spurs at the bends and gorges of the valley, and down which slides frequently occur, being the only portions bad for travel, and many of these are avoided by fords, practicable in all seasons of the year.

Two considerable streams fork with the Similkameen from the south south-west, both of which rise in the cascades, or rather in the mountainous region east of the main range and near the 49th parallel. The first, named the “Zloochman,” united with it about nine miles below “Vermillion,” and an old “Corrall,” near the mouth, admits of its position being easily recognized. A trail follows the river for some distance into the mountains, leading to no particular place, and Indian hunters, the original makers, are probably the only people who frequent it.

The second, or “Na-is-new-low,” river forks about 17 miles further down. Up its valley runs a tolerably good trail leading to the mountains near the parallel, and as this route is both more practicable and shorter than that in the “Zloochman” valley, it has been used this autumn by the United States Boundary Commission for transporting eastward the whole of their stores, instruments, &c.

Several other mountain streams, some of them of considerable size, fork with the “Similkameen,” from the northward and eastwards, but their directions and the positions of their sources are possessed of little interest.

Camp 7 appears to be on the north banks of the Similkameen where the river dips to the south, then goes east for a short distance, then turns south again. There are no creeks indicated, but high hills immediately behind the camp. The hills might be Stemwinder Mountain, and if so they would be in the region labeled Chuchuwayha 2, which is a Similkameen Indian Reserve today. Modern day Hedley, B.C., is more or less in the centre of this reserve (but not on reserve lands), and in Hedley is the Snaza’ist Discovery Centre.

Further along the river is Palmer’s Camp 8. Remember that the camp numbers refer to those on the entire trail and not only those in the Similkameen Valley. The bend in the river, which Palmer called the Keeree-maous bend of the “Similkameen,” seemed to occur four miles after they had left their camp. This does not mean that this is where the modern-day town of Keremeos is, and in fact it is well down the valley.

September 26th — A fine, mild morning. Travelling along from Camp 8, towards the Keeree-maous bend of the “Similkameen,” the valley gradually widens to upwards of a mile; the prairies become more extensive, and the soil richer; timber is chiefly confined to the uplands and banks of the river, and the mountains, though undiminished in height, are covered with grass, and assume a pretty park-like appearance.

We soon reached the bend, distant four miles from Camp 8, where the river changes its direction from east to south. Looking southward from the head of the bend is seen a fine open valley 12 miles long, varying from 1 1/2 to 2 miles in width at its upper and middle portions, and tapering to a narrow gorge at its lower extremity. The river, after taking a bold sweep, runs along near the foot of a mountain range skirting the western edge of the valley, amongst the southernmost of which, “Mount Forty-nine” again comes into view, and the trail follows a terrace or bend on the eastern side of the valley some distance from the river bank. [Palmer’s “Mount Forty-nine” was in Cathedral Provincial Park, which contains a number of mountains of some size]. Rich, well irrigated soil, long grass, and luxuriant wild vegetation are the characteristic features of the beautiful district, which appears admirably adapted for cultivation, and may in fact be named “the valley of the Similkameen.”

We camped tonight at a point near the southern extremity of this valley, where the trail leaves it, and an observation of Polaris, which gave me a latitude of 49 degrees, 03′ 20″ north, dispels all doubt as to the position of the boundary in reference to the valuable tract through which we had just travelled.

Palmer had been instructed by James Douglas to survey this trail, firstly, with a view of making this a wagon road. Secondly, he was to assess whether or not any part of the trail would be a good place for settlers to make a home, and thirdly, he was to discover how much of the trail crossed the boundary line and was actually in American territory. Hence the various remarks in the journal, which continues here:

September 27th… About four miles from our camp (No. 9) occurs a second bend, commonly known as the “Big Bend” of the Similkameen…

Keremeos is here, but the big bend of the Similkameen occurs in Cawston, which is just east of Keremeos. At Camp 8, the brigades must have actually camped pretty close to where Keremeos stands today. Further along on their day’s hitching, the Similkameen River flowed south to cross the boundary line into American territory. Fortunately for the HBC men, they had an easy route east to the Okanagan River and Osoyoos Lake, through a gentle pass. This is Richter Pass, named for Frank Richter who worked at the Similkameen Post, and who traveled over the pass many times in his career. The modern-day highway also follows this route.

The trail, on leaving Camp 9, passes over a divide in the range of hills bordering on the river, the ascent and descent being long and gradual, the land terraced and grassy, and the road good…

Camp 10 is situated in latitude 49 degrees 01′ 52″ N, at a point on Lake Osoyoos where two long sand bars [eskers] projecting from either side to nearly the middle of the lake, and connected by a ford, admit of a passage across…

I can’t locate Camp 9 on this map, but as I have said it is very hard to read. But this is interesting (at least to me), and I think I have sorted out (to my satisfaction at least) where these men spent their nights. When I again drive through the Similkameen Valley, I will be able to look at it with a more experienced eye. If you want to see how the trail passed over the mountains that divided Osoyoos Lake from the Kettle River valley, you can read this post: http://nancymargueriteanderson.com/kettle-valley/

2 thoughts on “The Similkameen Valley section of the Brigade Trail”